Neither life nor death worthy of a human being - Kosovo 2.0
In-depth | COVID-19

Neither life nor death worthy of a human being

Tens of thousands of old people in Serbia are locked into nursing homes.

“I’ve seen the children from the window as much as I could and whenever they could come because they couldn’t leave their apartments due to the curfew. They are older than 65. And now I have a grandchild who I haven’t seen yet,” she says bitterly, continuing her story about living more than a year behind locked doors.

Her son Milan, 66, whom we met outside the nursing home, nods his head as he listens to our conversation.

“We didn’t put her in prison, but a nursing home because she needs special care,” Milan says with sadness in his voice. “She isn’t going outside, doesn’t see her family. That’s not life. And if she leaves us, we won’t be able to send her off properly. Neither life nor death worthy of a human being.”

Milan asked us to hide his and his mother’s identities, but they are very eager to talk about what they have been going through. “It’s a small place, and the government is the way it is, while my mother is locked up in the nursing home. They shouldn’t know who we are,” Milan says, justifying his decision to remain anonymous.

The elderly are now approaching almost a whole year since they were sentenced to ensure “their well-being,” the authorities say. 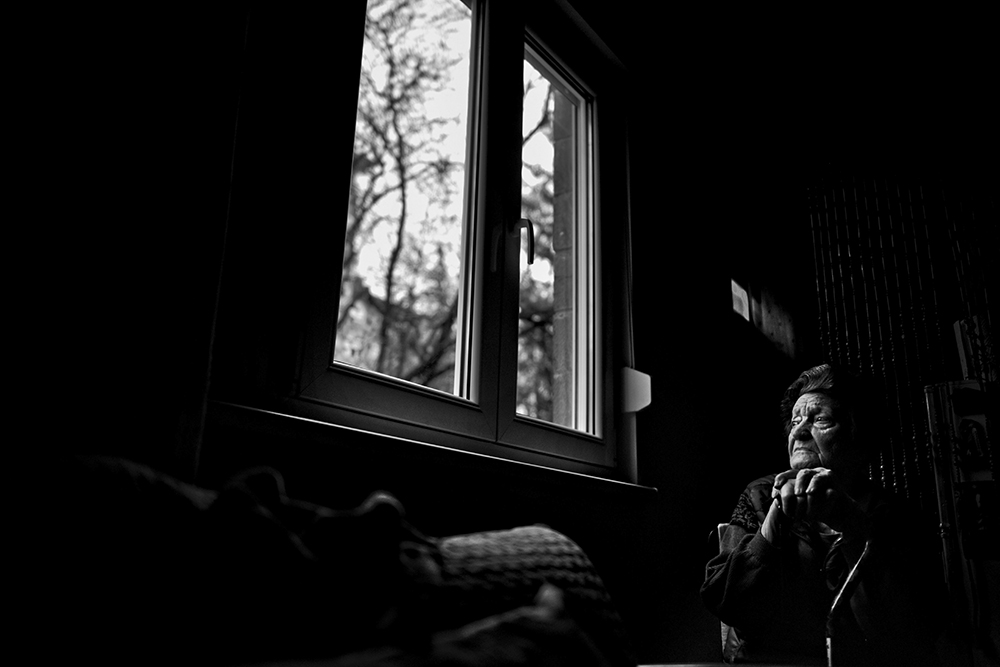 About 15,000 elderly people in Serbia are living for over a year in care homes. They only have minimal contact with the outside world. Photo: Aleksandar Pavlović.

Divna is just one of around 15,000 people who haven’t left the state gerontological centers in a year. K2.0 sent a request to the Ministry of Labor, Employment, Veterans, and Social Affairs, asking about the number of people living in the nursing homes, both private and state-owned. However, we haven’t received a response yet.

When the state of emergency was introduced on March 15 in Serbia, the freedom of movement of the elderly was at first completely banned and later restricted, while the residents of gerontological centers were put under lock and key.

The measures have been eased since then. Young people are going to coffee shops, new shopping malls are opening, and even football matches are held, but thousands of older people remain locked in the centers, even the army was stationed in front of them at one point. A few aid packs were also delivered on behalf of the ruling party and family members.

During the first phase of the vaccination plan, priority was given to those living in nursing homes, those older than 75, and people over 65 suffering from chronic diseases. That’s a total of 635,200 people in Serbia. However, the number of elderly vaccinated citizens varies in practice not only from city to city but also between municipalities of the same city.

Minister of Labor, Employment, Veterans, and Social affairs Darija Kisić Tepavčević, told RTS on January 30, that visits to elderly in nursing homes will be enabled; under the condition that the nursing homes had no infections and the visitors are vaccinated. She mentioned that it would be necessary to meet other conditions as well in order to make visits viable.

By the end of January, the Crisis Staff decided to enable visits to the elderly in gerontological centers provided special measures are in place, and only for those already vaccinated.

By the end of January, the Crisis Staff (a governmental working group managing the crisis) made the unanimous decision to enable visits to the elderly in gerontological centers provided special measures are in place, and only for those previously vaccinated. Despite this, people wishing to see their loved ones must keep a safe distance during the visit, while residents are still not allowed to leave the centers.

The total number of nursing homes’ beneficiaries who have been vaccinated is still unknown. K2.0 also asked the relevant ministry whether the number of residents who died due to the coronavirus in Serbia’s gerontological centers is known, but we haven’t received an answer to this question either. Therefore, the results of locking down the elderly are yet to be confirmed. 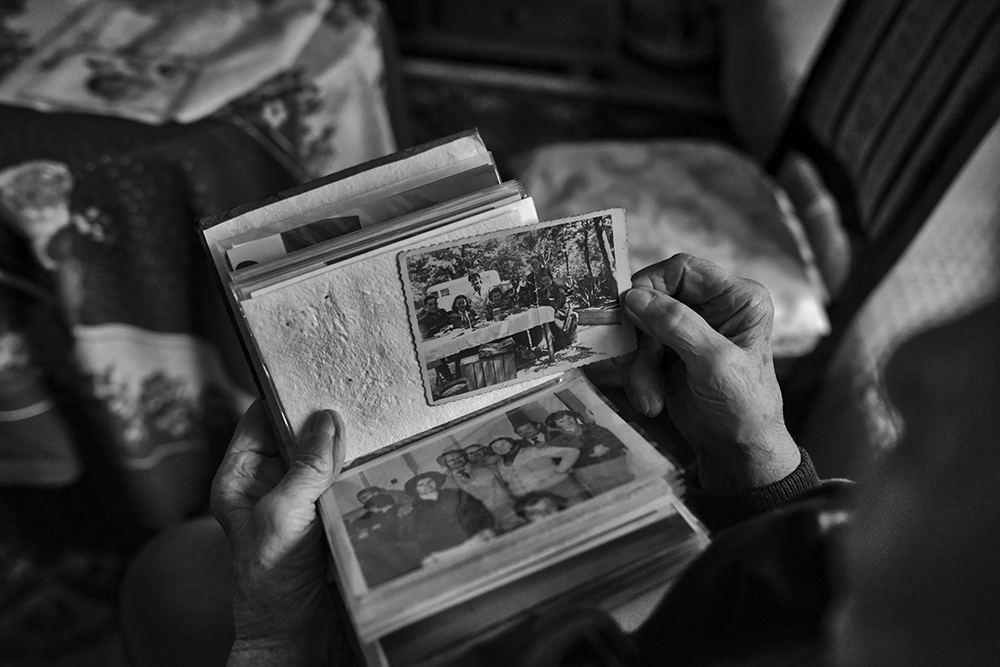 Elderly people in Serbian care homes during the pandemic have little, if any, opportunities to see their families. They rely on memories and the photos they cherish. Photo: Aleksandar Pavlović.

Despite the military guarding gerontological centers (and citizens in the streets) and the substantial isolation and blazing speeches of president Aleksandar Vučić who says that this generation of people must be saved, the coronavirus has “penetrated” into nursing homes many times, taking victims. In April last year, 50 residents of the Niš gerontological center died from the coronavirus. The center’s director Milan Stevanović was arrested because he hadn’t taken all the measures to protect the elderly. He was released from detention in late December.

Danilo Ćurčić, program director of Initiative A11, an organization dealing with the rights of vulnerable groups, including the gerontological centers’ residents, told K2.0 that they are trying to fight for the rights of the elderly in Serbia. He claims that there was a legal basis for restricting the movement of gerontological centers’ residents at the inception of the pandemic, referring to the order on the prohibition of visits and restriction of movement in the facilities of institutions that accommodate the elderly; adding that the legislation that was used as the basis for this action is deeply discriminatory.

“Our Constitutional Court sees no issues in what was done and how,” Ćurčić claims, announcing new efforts by Initiative A11. “It remains to be seen whether the European Court of Human Rights or the United Nations Human Rights Committee will have the same opinion as our Constitutional Court. It would really be a great surprise if these human rights protection bodies would decide that everything is in accordance with the human rights standards that are legally binding to the Republic of Serbia,” he says.

“What that says about the government is what we already knew, that they are incapable of dealing with the problems that concern vulnerable categories of citizens in particular, that they are insensitive toward their predicaments but have no problem presenting themselves as caring and in solidarity with those very ‘grandmas and granddads,’ as Vučić calls them while keeping them under lock and key.”

For the members of Initiative A11, it's precisely the care for the elderly that is an indicator of the government's incompetence.

Last October, the ombudsperson institution’s team attempted to conduct an investigation into the Nursing Home for Adults with Disabilities in Zemun and Belgrade. They decided to make this move after a complaint was sent to them by two beneficiaries due to the violation of basic rights. The team behind the institution was greeted by the acting director of the establishment, who prevented them from entering, explaining that the relevant ministry prohibits access to the facility.

For the members of Initiative A11, it’s precisely the care for the elderly that is an indicator of the government’s incompetence. Ćurčić emphasizes that ― while measures are eased every day or not even upheld among the general population, where the elderly are concerned, despite the bombastic “pledges” of the government that claims to want to save them ― the solutions offered only generate new problems.

“The government is incapable of looking into the problems that affect particularly vulnerable categories of citizens,” Ćurčić says. “We expected that the vaccinations would help. It’s difficult to make predictions because all of this has nothing to do with rationality.”

Isolating the elderly, who have been confined for a long time, impacts their mental health, K2.0 was told by psychologist Milica Lazić who is also a research associate at Novi Sad’s Faculty of Philosophy. As poetic or pathetic the statement that “they have only a few springs left and have been deprived of them” may sound, in the words of Crisis Staff member Predrag Kon, it’s the truth.

Psychologist Milica Lazić says that the state has taken measures to protect people’s physical health, but mental health wasn’t considered. According to her, isolation itself proved to generate the most severe consequence of the coronavirus, on society’s overall health. 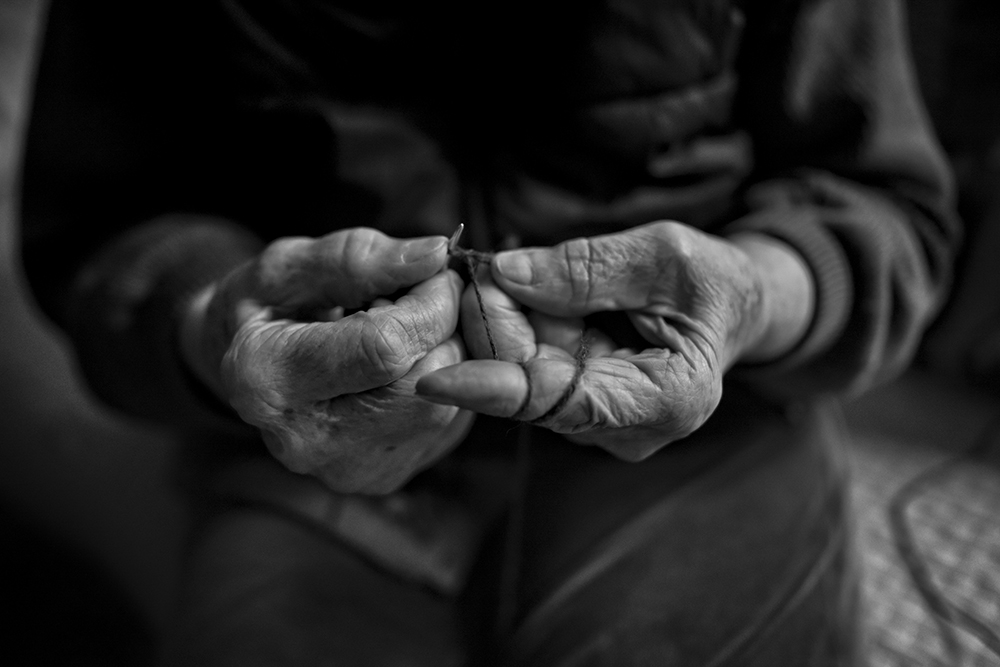 Psychologists are warning about the devastating consequences of lockdowns, especially accompanied by drastic measures whose efficacy is questionable. Photo: Aleksandar Pavlović.

Namely, studies have shown that during the so-called lockdown, meaning the curfew and restriction of movement and communication, it’s precisely the isolation that leads to increased levels of depression among citizens, as well as other mental illnesses.

“People have trouble adapting to this unnatural way of life and therefore experience major emotional distress. A few research studies were conducted, albeit with those over the age of 65 who were also locked up, but within their homes, and their biggest stress is the inability to move and socially communicate,” Lazić said.

“What’s particularly important to emphasize is that these measures haven’t been shown to be effective,” Ćurčić said. “Hence, besides being discriminatory and unreasonable, they are also ineffective. I’m not the one claiming this, but it’s visible from the official statistical data from the Ministry of Labor, Employment, Veterans, and Social Affairs, that publishes statistics on the number of beneficiaries of social welfare institutions (nursing homes and closed institutions) who contracted COVID-19.”

“Providing systemic psychological assistance to the population is necessary. Especially to vulnerable groups, including people who live in nursing homes,” Lazić said, adding that solutions that have been sporadically presented to the public won’t suffice.

Experts predict that, as soon as the coronavirus is put under control, it will be necessary to initiate the process of providing systemic psychological assistance to the population.

Both highlight that a plan for systemic support is required, especially for older people. Lazić doesn’t believe that introducing landlines that offer free psychological help is a good solution.

Experts predict that, as soon as the coronavirus is put under control, it will be necessary to initiate the process of providing systemic psychological assistance to the population, and particularly to vulnerable groups, including the elderly in nursing homes. For now, no plans are in place to do something similar. K2.0 sent an inquiry to the ministry, asking about a plan for offering psychological assistance to isolated individuals but never received a response.

“Nobody can predict the amount of time necessary for returning to psychological ‘normalcy,’ especially for vulnerable groups. But to repair the damage, a solution or plan must be created,” Lazić concluded.

In the meantime, Milan and who knows how many more people are waiting for their family members to be free once again.

“I want to see my mother. She gave birth to me and raised me. She is my mother,” Milan says. “I spent several months in isolation when the curfew began. I lived several hundred meters away from (the nursing home), but I couldn’t get out or see her. I’m waiting for the vaccine, and then we will see what comes next. They released me from ‘prison’ (isolation), and so I wait for them to release her as well.”K

Editor’s note: The names of interlocutors in nursing homes and family members have been changed at their request.