No end in sight

After a year of acrimony, frustration and political paralysis, this week was supposed to mark a turning point, one way or another. With the controversial border demarcation agreement with Montenegro finally tabled for a vote in the Assembly on Thursday, it seemed that a step had been taken; although in which direction, nobody could quite agree.

As it was, on a day of high tension inside and outside parliament, the draft law never made it to the Assembly floor; at the eleventh hour, before the keenly anticipated agenda point six had been reached, Prime Minister Isa Mustafa stood up and announced that the government was withdrawing it from the agenda.

And just like that, with a wizard’s wave of his wand, the whole pesky issue magically went away….

“Today the circumstances are not right to vote on ratification of the demarcation agreement with Montenegro,” Mustafa announced as he took to the podium, an hour into Thursday’s Assembly session, which was marked by heated exchanges between government and opposition deputies.

Demonstrating his credentials as a someone always willing to hear other points of view and make compromises, he went on to explain that “this does not mean we will review the agreement, but we will seek further consensus.” A meeting organized by independent deputy Ramiz Kelmendi on Wednesday failed to materialize after none of the party leaders turned up.

Thursday’s session got underway almost two hours later than scheduled, with PDK deputies holding a behind-closed-doors meeting with party leader Kadri Veseli. When it eventually begun it was without Vetevendosje deputies Donika Kadaj Bujupi and Aida Derguti, who were detainedfollowing security checks and escorted away for questioning by police. Also conspicuous in their absence was government coalition party Serb List, who decided to boycott the session, citing security fears. 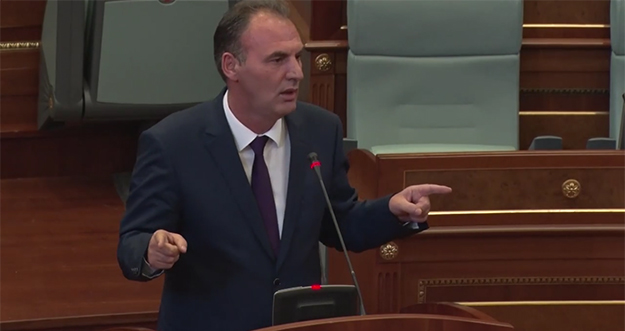 After Mustafa announced that the Montenegro agreement — which would have required a two-thirds majority to pass — had been withdrawn from the day’s agenda, NISMA leader Fatmir Limaj took to the floor to cast suspicion on the government’s motivations for the delay. “Why withdraw this law today, which has been pending for more than a year?” he asked “You do not have the votes to ratify the demarcation [agreement].”

Glauk Konjufca, the Vetevendosje parliamentary group leader, used his speech to thank those who he said had helped to bring about the “failed vote”; activists, independent experts, LDK and PDK MPs who opposed the agreement, the opposition, and of course, the people. 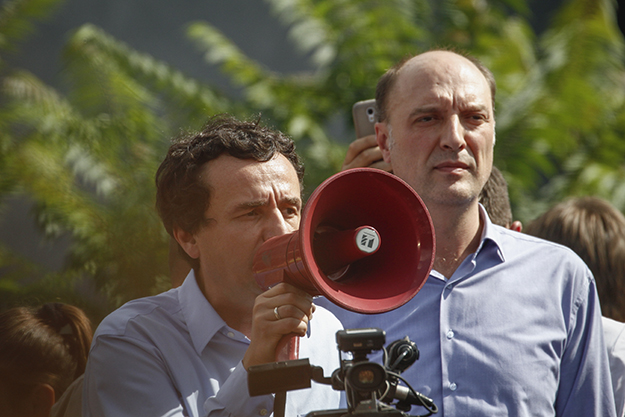 Vetevendosje party leader Visar Ymeri, flanked by his predecessor Albin Kurti, then headed outside to address the large crowd who had responded to the party’s call to protest. “We need to continue our resistance and gather here at the square around the Assembly whenever it’s necessary and to stop this government’s work once and for all,” Ymeri announced to cheers; some were so buoyed by the vote’s postponement that they even felt moved to chant the party leader’s name a few times.

The triumphant protesters quickly remembered who their real hero was though when Kurti — a man who knows how to work a crowd — took over the megaphone. “We have saved 8,200 hectares,” he said, referring to the area of land the opposition claims Kosovo will lose under the agreement with Montenegro. “We need the mountain peaks because in times of peace the flatlands are more important, but in times of war the mountains are more important.” 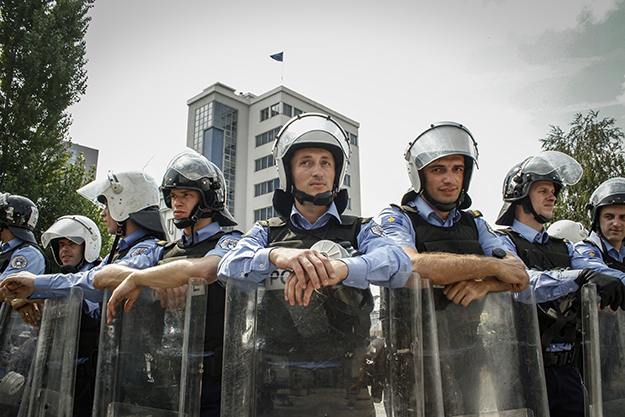 Amidst a huge police presence in Prishtina throughout Thursday, many central streets were closed and rows of police in riot gear surrounded the Assembly building. A few minutes before the scheduled start time for the protest, Kosovo Police announced that they had found 50 bags containing Molotov cocktails in a warehouse in the Dardania area of town, although no further details were released.

With the Assembly holding its first regular session in a while, deputies used the opportunity to address some of the other pressing political issues of the summer. Kujtim Pacaku, the Kosovar New Romani Party deputy,spoke of his anguish at hearing leading PDK figures in the ongoing wiretap releases using derogatory and offensive language when discussing the Roma community that he represents. To applause from the other deputies, Pacaku said that he refused to leave the Assembly’s speaking podium until somebody from PDK had issued a public apology. 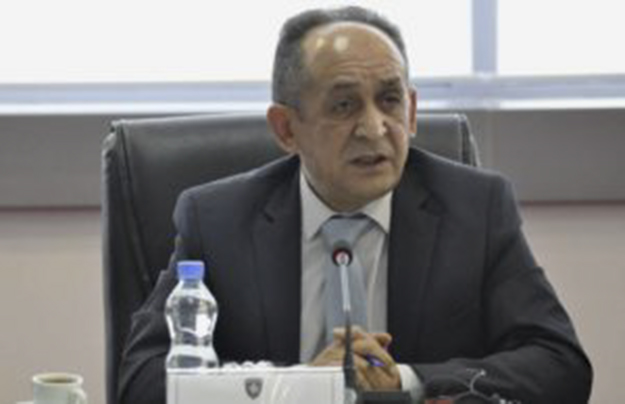 A second ‘apology’ followed immediately after, as Adem Grabovci, the star figure from the wiretap revelations, gave a heartfelt speech. “My family and I are going through moments of terror,” said the man who has been unveiled as being at the center of institutional nepotism and abuse of power. “I apologize from my heart and soul and have sympathy for what is happening and cannot believe that for around a month a European country, a family and an entire population has been terrorized as a result of these interceptions.”

The poor victim, who in this week’s releases has been heard describing threats he made to the former Speaker of the Assembly, discussing how to insert party affiliates at the top of public institutions, and calling a party-colleague an idiot, was quick to point out that he had been trying his best to keep things civil. “I made an effort not to offend anyone during those conversations,” he said. “I apologize to those who feel offended … I leave the rest to justice because I believe in the state.”

Grabovci’s ‘apology’ was met with an angry response from the opposition benches, with Vetevendosje deputy Fisnik Ismaili standing and shouting that Grabovci should be in jail. Veseli, perhaps practising phrases from a new English-phrase-a-day calendar, told Ismaili to “take it easy.”

On Tuesday, citizen-led movement “Protestoj” had held their seventh protest in the center of Prishtina in reaction to the wiretap revelations. In one of the biggest turnouts since they began their actions at the start of August, protesters read aloud their pledge to keep the protests going until key figures are held to account for their roles, before symbolically throwing trash into the government compound.

Adding to tensions in the buildup to Thursday’s Assembly session and protest, on Tuesday police arrested six Vetevendosje activists, including party spokesperson Frasher Krasniqi, on suspicion of terrorism. The arrests were carried out in a joint operation between Kosovo’s Special Prosecution and Kosovo Police, who said that there is evidence linking those arrested with the attack on the Assembly building earlier this month. 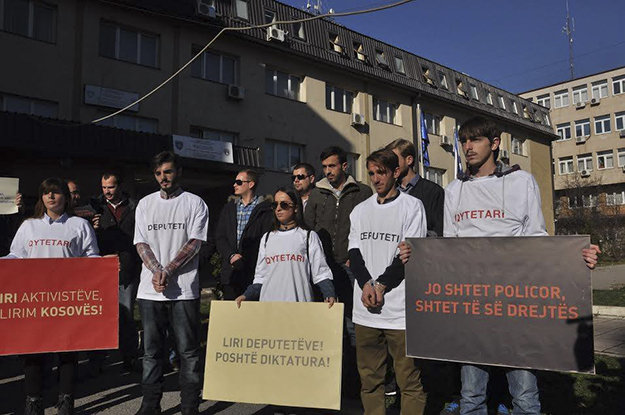 Police released images of weapons found at the locations of the arrests, a move that Vetevendosje condemned as “propaganda.” The party categorically denied that its activists had been involved in the attack on the Assembly and questioned why the incident had been originally referred to as an “attack with explosives” but was now being called terrorism. “This is a classic act of persecution against political opponents,” Visar Ymeri told a press conference following the arrests.

On Thursday, the Basic Court of Prishtina ruled that three of those arrested should be detained for 30 days while investigations continue, while the other three are to be held under house arrest.

In a separate incident on Sunday night, an attack was reported on the home of public broadcaster (RTK) Director General, Mentor Shala. It follows another incident last week where a grenade was thrown at the RTK offices — nobody was hurt in either incident, which have both been widely condemned as attacks on freedom of the media.

An official statement on Monday evening by RTK — which is often criticized as being pro-government — implied that Vetevendosje is responsible for the attacks. “We continue to believe that hate speech used by different political forces, especially by the movement ‘Vetevendosje’ presents a real threat and a serious threat to the normal functioning of the public broadcaster,” it read.

The opposition party had earlier condemned the attack, saying that it did not agree with the methods used recently against public institutions, but repeated its stance that “RTK is captured.”

The International Day of the Victims of Enforced Disappearances was marked in Prishtina on Tuesday with a poignant tribute to the 1,665 people still missing after the war in Kosovo. In the city center, Youth Initiative for Human Rights screened the powerful documentary “Depth Two,” which documents some of the atrocities committed by Slobodan Milosevic’s regime and the orchestrated cover-up operation. After the documentary, ‘The Box of Mourning’ (‘Kutia e Zise’), a black box with the names of the 116 children who have never been located after being disappeared by force during the Kosovo war, was lit up in Zahir Pajaziti square. 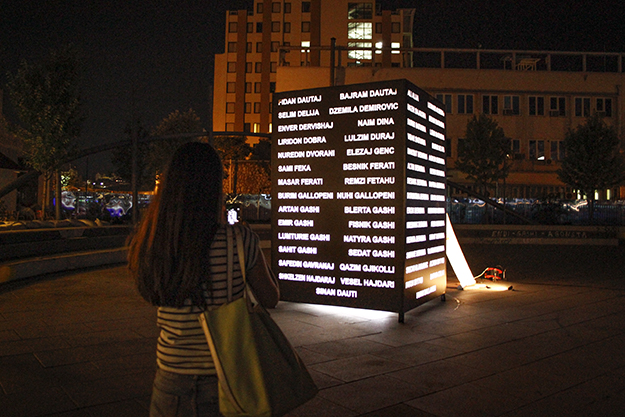 You can read K2.0’s full article on this year’s International Day of the Victims of Enforced Disappearances here.

After a busy week, there’s no shortage of things to keep you going this weekend. Tonight, one year on from his marathon 10-hour set in Prishtina, top German electronic DJ Solomun will be once again drawing the crowds at Zone Club.

If you’re looking for something a little more chilled out, head to Rahovec for the annual Hardh Fest, celebrating all things wine-related with concerts, activities and a glass or two of the grape-juice. And while you’re there, check out the International Poetry Festival that is taking place at the same time.

Finally, because it’s the weekend — and just because — we leave you with a song. In a week where the border demarcation agreement with Montenegro remains just as unresolved as ever, we leave you with the Supremes’ “You Keep Me Hangin’ On”: