Menacing echoes of Slovenian non-paper on the future of the Balkan region linger.

When Nikola Aleksić finished his undergraduate studies in Ljubljana, he planned to stay in Slovenia, and promptly enrolled in a postgraduate program. But new amendments to the Slovenian Aliens Act earlier this year might disrupt the studies of Serbian citizens like Aleksić, as well as other non-EU students.

Soon all of them will be obliged to present proof that they have enough money to support themselves throughout their studies, at a minimum of 5,000 euros per year. The Slovenian government will have the right to check people’s bank accounts.

Some in Slovenia see the new amendment as a xenophobic act of a closed society. Slovenian Philanthropy, a Ljubljana-based NGO, reacted by writing an open letter to the Minister of Interior, claiming damage will be done not only to foreign students but also to the international standing of Slovenia.

For Aleksić, Slovenia’s recent politics reminds him of Serbia back in 2012, when ultranationalists won the elections and crushed the dreams of many that real change is possible. However, having followed the decisions and rhetoric of Janez Janša’s nationalist government, Aleksić said, the latest decision came as no surprise.

“Every fascist regime hits at those who might offer critical thinking and every authoritarian government takes aim at foreigners,” Aleksić said. “They want an ethno-religious — and in all other aspects — a homogeneous society that can then further fuel ethno-nationalism and conservative traditionalism.”

For Aleksić, as well as other analysts K2.0 spoke to, what is going on in Slovenia is potentially dangerous, and has concerning implications for the rest of the region, and the process of EU enlargement for the Balkans.

“I expect we will hear more in the coming months about Slovenia as one of the EU’s black sheeps, along with Hungary, Poland, and increasingly Croatia,” said political analyst Jasmin Mujanović.

Janša’s vision of the future

This spring the whole region was talking about the Slovenian non-paper which went from the office of Prime Minister Janša straight to Brussels. The non-paper, an EU term for an unofficial set of talking points shared confidentially between governments or institutions, leaked to necenzurirano.si, a Slovenian news site.

According to the leaked document, Slovenia proposed the changing of the borders in the Balkans, with Serbia, Croatia and Albania swallowing up much of Bosnia and North Macedonia, and all of Kosovo.

In May this year, after the media frenzy started, Janša claimed that since it was a ‘non-paper’ it does not exist.

The media storm around the Slovenian non-paper started after reports about a meeting between President Borut Pahor and members of the tripartite Presidency of Bosnia and Herzegovina. In a news conference in response to media revelations, President Pahor said that at the meeting he asked whether the borders of Bosnia and Herzegovina could be changed without violence, but also that he agreed with prevailing opinions that such a change cannot happen.

This ill-advised inquiry brought to light what was apparently a solo action of Janša; the rest of the government denied any connection with the non-paper.

In May this year, after the media frenzy started, Janša claimed that since it was a “non-paper” it did not actually exist. 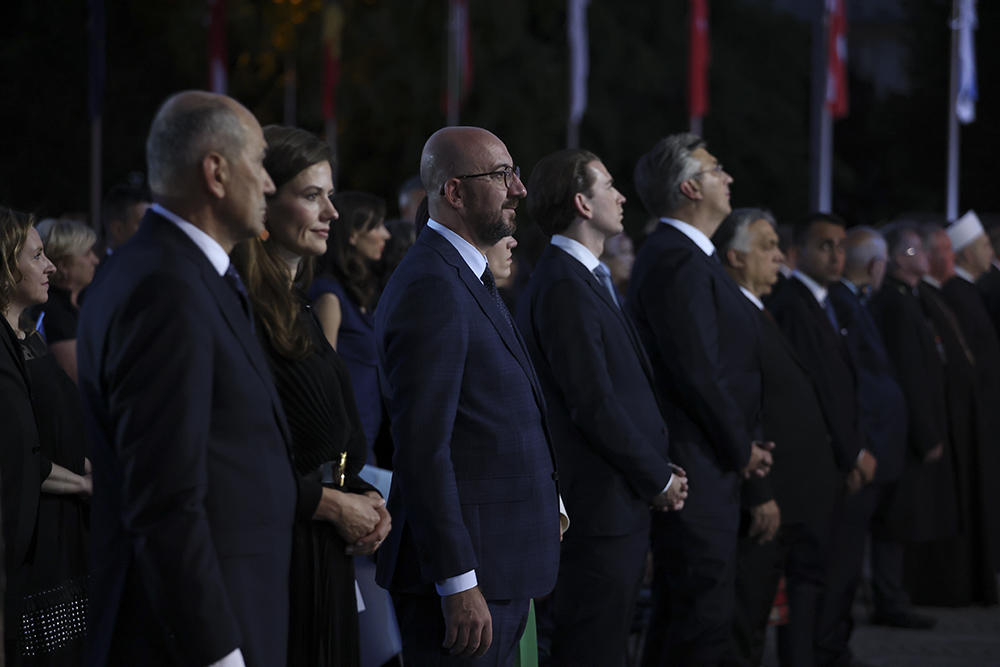 At the end of June, and before Slovenia took over the EU Presidency, Charles Michel, the President of the European Council, visited Ljubljana. Photo: European Council Press.

Meanwhile, the Slovenian Ministry for Foreign Affairs indirectly confirmed they did not author the document, while the foreign minister warned that further discussions harm Slovenian interests.

Reactions from all over the world were mostly negative, as well as those in Slovenia.

“People are aghast,” said Alenka Bartulović, anthropologist and assistant professor at the University of Ljubljana.

Bartulović came to Slovenia from her hometown Sarajevo during the wars of the 1990s. For her, the non-paper reflects the current government’s vision for the country and the Europe of the future: “Christian states with ethnic borders.”

“They are pushing Slovenia to the wrong side of history by denying basic principles of human rights and rewarding policies of ethnic cleansing. This is worrying,” said Bartulović.

Jasmin Mujanović believes the Slovenian proposal is very dangerous, as it could not be accomplished “without another series of wars and crimes against humanity.”

Months after the document leaked, nobody inside the Slovenian government is willing to talk about it openly.

Slovenia's official foreign policy position is that the country supports the further integration of the region into the EU.

When K2.0 asked the Ministry of Foreign Affairs about the consequences of the media reports on the non-paper, and how these have been and will be addressed during Slovenia’s time chairing the Presidency of the Council of the EU, which starts in July, the ministry said that Slovenia’s official foreign policy position is that the country supports the further integration of the region into the EU. Indeed, that is what is marked as one of the priorities during the EU presidency.

“Credible enlargement policies are of key importance to avoid stalemates in reform processes in the countries in the region and to prevent inciting nationalism, general discontent and contemplating different alternatives,” the ministry said in their email.

“Our key aim is for the EU to start considering the Western Balkans from a geo-strategic position and to find necessary political will to continue the enlargement strategy,” they added.

What is happening with Slovenia?

Slovenia’s reputation has already been tarnished, according to Tanja Fajon, Slovenian member of the European Parliament. She warns not only about official statements, but also Janez Janša’s tweets, which, according to Fajon, “are oftentimes opposed to Slovenian national interests.”

“A lot of damage to Slovenian diplomacy has already been done, while some historical mistakes are made that will not be easily forgotten,” she wrote in an email to K2.0.

Janša government actions, non-paper, and increasingly xenophobic and hateful undertone by some officials, are rising concerns.

Fajon added that Slovenia “should have been engaged more actively to respectfully and professionally offer support to countries in the region in their accession efforts,” referring also to North Macedonia and the dispute with Bulgaria about language, history and culture.

Slovenia remains an important country in the region. Historically, and especially after its independence from Yugoslavia in 1991, the Slovenian economy relied in large part on workers from other parts of the broken-up federation. Cultural connections similarly abound.

Now Janša’s government actions, the non-paper and the increasingly xenophobic and hateful undertone by some officials, are raising concerns.

“I was in Pula for the last five days. During every conversation came a question – ‘What’s happening to you in Slovenia?’,” said Irena Urbič, a co-organiser of the literary cross-border festival Forum Tomizza.

The non-paper was the first thing mentioned in many of her conversations with festival guests, Urbič said.

“We have not yet fully comprehended that in the last months we used up the last drop of irrational benevolence we had enjoyed in the region. And once you lose it, there is no turning back.”

Urbič goes so far as to call the Slovenian non-paper “a betrayal by a friend,” referring to longstanding relationships with the rest of the region.

As the first country to break away from Yugoslavia and join the EU, Urbič thinks Slovenia has done a poor job of remaining politically engaged in the region. But despite this, “culture and art have nurtured a different vision and experience. The reality of cooperation and communality exists and it proves that present Slovenian politics can be overcome,” said Urbič.

Unlike in the field of culture, where cultural workers are looking for ways to overcome controversies created by the government decision, for workers in other fields it is much harder.

“The current government has made its position clear and workers are embittered, they feel betrayed."

The Workers’ Advisory Office in Ljubljana deals with violations of workers’ rights and systemic exploitation. The Janša government’s changes to the Aliens Act in April made it harder for foreign workers to apply for family reunification by prolonging the residency period from one to two years, tightening financial requirements and limiting social rights to reunified family members.

The head of the Workers’ Office, Goran Lukić, said that “the latent political hatred” is felt by many today.

“Workers have for some years had fewer illusions,” he said, explaining that in Slovenia illegal practices and violations of the rights of foreign workers had not changed or shrunk, but had become normalized. 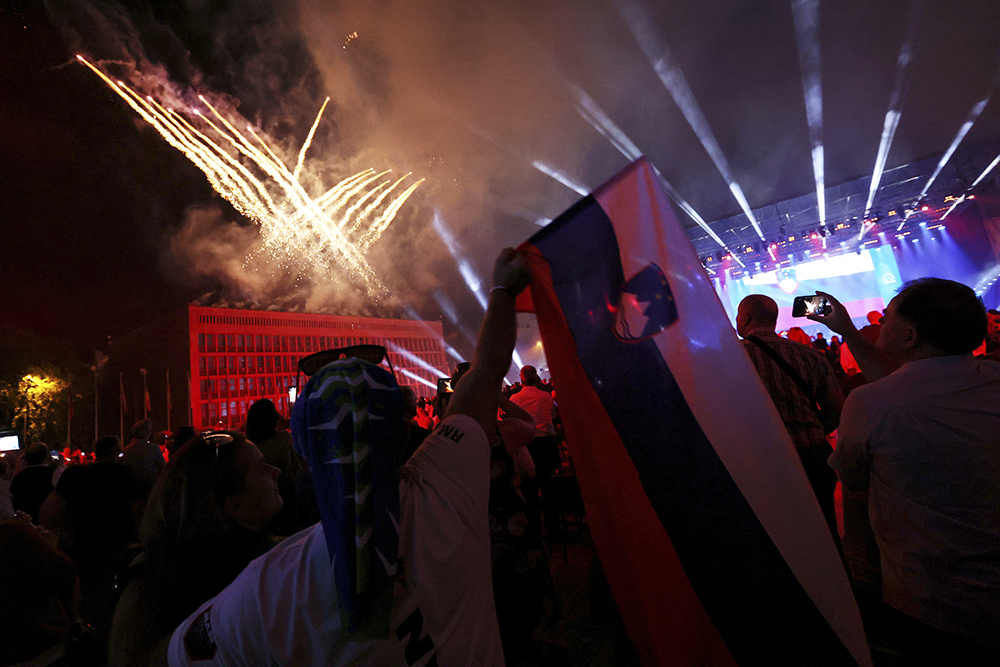 The pandemic did not stop the protests in Slovenia, but also did not prevent the government from celebrating the 30th anniversary of the country’s independence on June 25. Photo: European Council Press.

“The current government has made its position clear and workers are embittered, they feel betrayed,” said Lukić. “They have come, prepared to work even in exploitative conditions, but are now caught up in growing intolerance of political messages that paint them — the foreigners — as the problem, the ones who exploit the system.”

On July 1, Slovenia will take over the EU Presidency for the next six months. The government has less and less support among its citizens, who have been protesting weekly for over a year now.

One of the last big protests was held in June against the decision to cut state money for Radio Študent, well known for its journalistic work and critical voice. This was just the latest manifestation of the Janša government’s attempts to bring the media to heel.

There is little hope across the region that the next six months will bring positive meaningful changes when it comes to the EU accession process.