Six years ago, when Kadri Gashi was 27, he was determined to be by his partner’s side when his daughter, Olta, was born. However, staff at the University Clinical Center of Kosovo (QKUK) wouldn’t permit him to be present in the delivery room, despite women relatives of the couple being allowed in.

Today, Gashi remembers other life events that made him aware of different existing gender-based prejudices in Kosovar society: The gynecologist’s astonishment during visits with his wife that the sex of the baby didn’t matter to the young couple; or how two years ago the male educator at his daughter’s kindergarden was transferred to a managerial position (which does not involve taking care of children), following the pressure and prejudices directed towards him by parents, who found it odd to have a male educator.

Such experiences encouraged Gashi to engage in work that sets out to challenge traditional gender stereotypes etched into Kosovar society. For three years now, he has been the coordinator of the Young Men Initiative (YMI) project in Kosovo, led by Care International and Peer Educators Network (PEN), which organizes national campaigns promoting ‘positive fatherhood.’ As an activist on the ground, he tries to advocate and raise awareness about the importance of paternity leave and the presence of fathers during the first weeks and months of a child’s life.

“I am expecting a second child now … and I will try to be present when my wife gives birth,” says Gashi. “I want to be there … to insist and be an example that even in Prishtina’s public hospital, fathers can get involved. At the same time, I will try to raise awareness among other fathers [to do the same].” 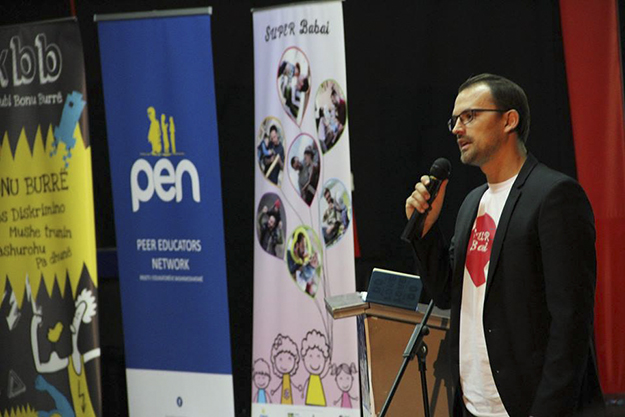 Kadri Gashi is the coordinator of the Young Men Initiative project in Kosovo, which aims to promote ‘positive fatherhood.’

There is widespread research showing that the extensive participation of fathers in children’s lives greatly contributes to the welfare and happiness of both children and parents. Paternity leave is considered especially crucial in promoting the wellbeing of children, as well as gender equality at home, the workplace and wider society. In this regard, existing policies relating to parental leave regulated by the Labour Law in Kosovo offer a far from inclusive approach towards parenthood.

Based on Article 49 of the current Law on Labour, which refers to maternity leave, mothers are currently entitled to 12 months of leave: Employers are obliged to pay 70 percent of the salary during the first six months of leave; the government pays for the following three months at a rate of 50 percent of the average Kosovar income; the last three months can be taken unpaid. Meanwhile, fathers are only entitled to take up to three days of paid paternity leave, although mothers are technically able to transfer the last six months of their maternity leave to the child’s father. Up to two weeks of unpaid leave can also be taken by the father in the period before the child’s third birthday.

"It is unfortunate that the law forces fathers to be away from their children during a very important life period for both."

Officials from MLSW told K2.0 that while they do not have data on paternity leave requests — which is agreed directly between employer and employee — to date there has not been a single request for a mother to transfer leave to the child’s father. As such, the main burden of combining appropriate childcare with job security continues to fall upon mothers, who by and large are viewed as being solely responsible. The father’s role and potential wish to be involved in childcare are being largely excluded.

In 2013, MLSW began drafting amendments to the Law on Labour with the expressed aim of increasing the participation of women in the labor market. Although the new draft contains changes towards maternity leave, there is no change proposed regarding paternity leave.

Gashi believes that the legislation needs to take into account provisions that would also extend paternity leave. “Institutions need to take it as obligatory, that it is a basic right of a father,” he says. “So he [the father] can share that time with the partner and be part of family care.”

According to Care International’s 2016 report, “State of the World’s Fathers: Balkans Review,” paternity leave is a vital step towards recognition of the importance of sharing childcare responsibilities. It found that in the United Kingdom, eight to 12 months after the birth of their child, fathers who took paternity leave were 19 percent more likely to participate in feedings and to get up with the baby during the night than fathers who did not take leave.

The report also found that paternity leave appears to lead to improved maternal health — including mental health — and reduced parenting stress. Engaged fathers were further pointed out to have the same influence on children as mothers do; inclusion of fathers is linked to a child displaying better cognitive and empathy development, improved rates of learning and superior social skills. 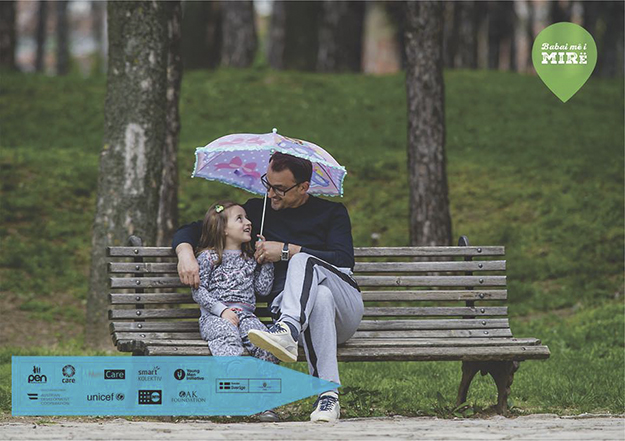 Kadri Gashi and his daughter have featured in posters promoting positive fatherhood, as part of a campaign to help break down traditional gender stereotypes about ‘masculinity.’

Qerim Ondozi, a young man based in Prishtina, became a father last December. As with Gashi, he was lucky to have spent the first couple of weeks next to his newborn child; Ondozi made an agreement with his employer to take one month of leave. He considers that taking care of his child immediately after the birth enabled him to develop a special connection with the baby. “It is unfortunate that the law forces fathers to be away from their children during a very important life period for both,” he says.

“I think it is very important to participate in that starting period, but it seems like the lawmakers and those who pushed this issue ahead think that all of us have big traditional families and that there are 10 or more women relatives near the mother,” Ondozi says. “But they are forgetting the fact that there are new parents who live by themselves. I cannot imagine how a new, young mother can deal with all the things that are required on a daily basis, starting from breastfeeding, to preparing meals, washing the baby, all the … intensive care that mothers need to do.”

This view is shared by Linda Gusia, sociologist and lecturer at the University of Prishtina, who told K2.0 that the current paternity leave provision of just three days strengthens gender divisions and the traditional view that the father needs to be “authoritarian” and “distant” in the child’s life.

Encountering such patriarchal attitudes among men he meets on a daily basis has influenced Gashi’s activism, who says that taking paternity leave is often perceived as something repressing to their masculinity; Gashi’s own friend was teased by male friends after taking days off from work in order to be next to his new-born child. 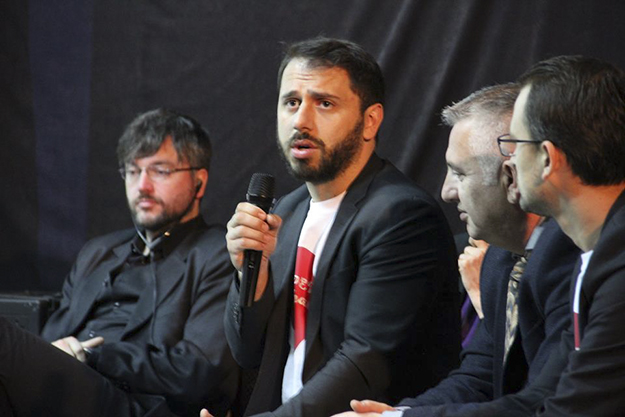 Experts such as Care International Kosovo’s Besnik Leka believe that improving paternity leave provision in Kosovo can have positive impacts on children, families and society as a whole through reducing gender discrimination.

Gashi’s fellow activist with YMI, Care International Kosovo’s Besnik Leka, told K2.0 that the participation of men in shared parenthood in a patriarchal country such as Kosovo, will have an important effect on challenging strict societal norms. “Taking paternity leave and spending time with the child in many cases can result in fathers sharing more emotions, which they might not otherwise show due to fear that this will threaten their masculinity, and that as a result they will be prejudiced by society,” says Leka. “And this at the same time would be a good initiative for other fathers, because in some cases fathers don’t use this right because of the fear of being prejudiced one day by society. The first fathers to start taking and enjoying the leave … will pave the way for more fathers to do the same thing.”

Improving paternity leave provision could also have the important effect of reducing gender-based discrimination in the labor market. Last year, The Economist reported that among other things paternity leave is good for women’s careers. “When childcare responsibilities fall exclusively on the mother, the effect is to depress women’s wages. Time out of the labor force deprives them of experience and promotions. When men shoulder more of the childcare burden, the effect is lessened,” reads the report. “These days, more governments are starting to believe that the best way to improve women’s career prospects is instead to turn to the dads.”

"When the father is engaged with the domestic work as well as his work, and when the mother is engaged in her career as well as the work in the house, then the children will learn about the importance of equal engagement."

However with the current Law on Labour under review, the MLSW appears to be passing up this opportunity. Under the MLSW’s proposed revisions, paternity leave is untouched, while it is proposed that maternity leave be reduced from a potential 12 months to nine.

In making its maternity leave proposals, the Ministry has partly been influenced by a 2012 report by the American Chamber of Commerce in Kosovo, which concluded that the article on maternity law is a burden to Kosovar businesses, and therefore causes discrimination towards women when they apply for new jobs. However many women’s rights NGOs, told Kosovo 2.0 last year that the draft provisions appear to favor businesses over potential mothers.

Kosova Women’s Network (KWN) argues that extending paternity leave is important for addressing traditional gender roles at home and in society, increasing women’s labor force participation, and addressing current discrimination against fathers. Following a request by MLSW for input on the final drafting of the Law on Labour, KWN published a policy paper in May with its own proposed amendments.

Iliriana Banjska, one of the paper’s authors, told K2.0 that KWN recommended for both parents to have three months of leave, paid at 80 percent of their usual salaries by their respective employers; the mother’s would be taken immediately after the child’s birth, the father’s at any point during the first year of the child’s life. An additional three months would be covered by the state at a rate of 50 percent of the average Kosovar income; this could be taken by either of the two parents, or shared between them. A final optional three months unpaid leave could then also be taken, by either of the parents or shared.

“This model lets the family decide what is more beneficial for them, financially, practically,” says Banjska. “Encouraging paternity leave through this financial incentive will enable women to return to their jobs sooner and therefore lower the risk of becoming unemployed, receiving a lower wage, or being demotivated after returning to work.”

Leka argues that if paternity provision was to be improved in Kosovo, it would reduce the pressure on fathers to ensure adequate family incomes, increase the share of domestic work and parenting carried out by men and above all would have a positive impact on the children’s futures.

“The child will grow up with two role models,” says Leka. “When the father is engaged with the domestic work as well as his work, and when the mother is engaged in her career as well as the work in the house, then the children will learn about the importance of equal engagement and the same thing will likely happen with the children’s partners in the future.”K