Prizren’s city walls get a photographic makeover from DokuPhoto workshop.

Photographs document the essence of different eras like no other medium, but it is more than a form of documentary, they incorporate artistic values — telling stories without uttering or writing a word. Now in Prizren, black and white photography will also give a new meaning to the term ‘street art,’ after a DokuPhoto workshop held on Saturday and Sunday (Aug. 5 and 6) culminated in the immortalization of small pieces of Albanian history in the city’s streets.

The workshop was the result of a collaboration between DokuFest and the Marubi National Museum of Photography in Shkoder, whose archive features photographs taken in Albania between 1856 and 1959. The Museum’s director, Lucjan Bedeni, tells K2.0 that “there are three Marubi generations, one from the period when Albania was under the Ottoman Empire, another when Albania was moving towards independence, and another in the period of monarchy and communism.”

Artist Ergin Zaloshnja, who instructed the workshop, chose images to be enlarged and printed from the over 500,000 available in the Marubi archives. The participants of the workshop, Zaloshnja, and a group of volunteers then began to cut out people, objects, and symbols to be applied to the walls of various spots in Prizren. 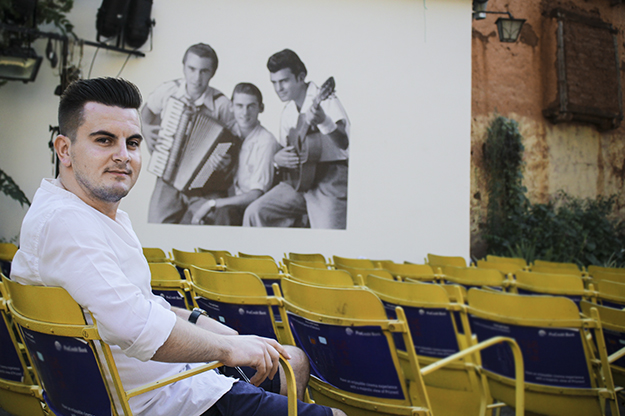 The first installed photo was of a group of singings musicians on a wall of the Lumbardhi Cinema, signifying the venue’s importance towards art and culture in Prizren. It was not all smooth sailing, as there were some complications getting the cutout to stick to the wall, but nothing a little bit more wheatpaste couldn’t fix. The first successful installation of the day was met with a round of applause from the small crowd present.

Zaloshnja admitted to K2.0 that finding locations in Prizren presented a challenge as he was new to the city. “There was a problem initially because I didn’t know where the best places [to install the street art] were,” he said. “I only discovered these places two days ago because I was in Albania.”

However, when creative minds go to work, solutions are never far away. Coordinator of the workshop, Likana Cana, revealed one of the more symbolic locations to have a historical Albanian photograph attached to its wall — and it is not the Sinan Pasha mosque, the Kalaja or any of Prizren’s other typical postcard images. “We have an image of a mother and two little children on the wall where Xheneta [Gashi] died after the house fell down,” she explained. “That’s very symbolic.”

By the time the second installation went up at the House of Culture, things were going a lot smoother, and the image stuck to the wall on the first attempt. The images of three women are now part and parcel of the building. “This is the house of culture, so these women were three teachers and this was the idea; teachers and culture,” said Zaloshnja, getting straight to the point. 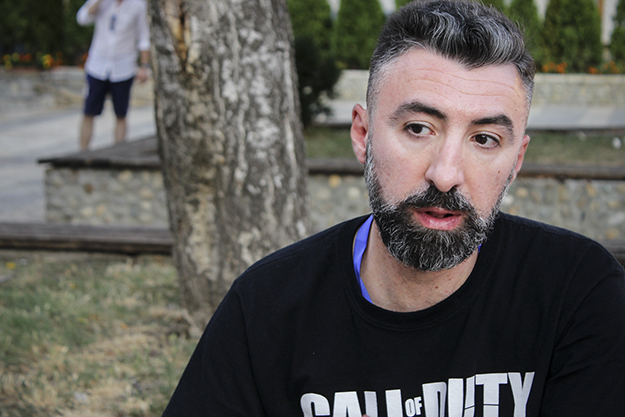 The aim of the workshop was not merely to beautify the city, participants also benefitted by learning a new technique. The group often worked together to make sure the images are not tainted or torn before the application to the walls, while art enthusiasts had the chance to witness up close the installation of a different kind of street art. “I personally like street art and I kind of want to learn more techniques so the workshop was a very good idea,” Sara Rodiqi, an architecture student and a participant of the workshop told K2.0.

Street art using wheatpasting is not a brand new endeavour. Zaloshnja had previously led a similar effort in Shkoder which had the more modern twist of incorporating digitally-induced effects. Rodiqi had also witnessed a similar project in Berlin with post-modernist images.

As the workshop drew to a conclusion, Zaloshnja announced he was happy with how it went and the mark it had left behind on the city of Prizren. He isn’t alone in that sentiment. “I think they fit very well, they give a good vibe to the place because it’s like a live photography exhibition throughout the whole city,” said Rodiqi. “A blend of street art and photography.”K