Protests against air pollution in Prishtina

This morning, activists of the Peer Education Network (PEN) and the Science for Change Movement organized their first action, as part of the campaign ‘Protect Your Children From the Invisible Killer.’ Held in front of the Ministry of Environment and Spatial Planning, his activity attempts to break the silence of this institution regarding air pollution problem in Prishtina and to ask for more transparency and accountability of the institutions. Also, throughout the day, the activists are on Mother Teresa Boulevard measuring the air pollution in real time and informing citizens about this matter.

Politicians in Kosovo often use the saying “children and youth are the future of this country,” a saying which has now lost all meaning. For it is precisely children and youth (of course, together with other groups) that are being poisoned by the air in Prishtina; they are bearing the consequences of institutional negligence.

Taking into account that the air is a common good and seeing that the citizens have been left with a total absence of information regarding the quality of air that they breathe, the activists will also spend the entire day in Mother Teresa Square measuring the quality of air and providing citizens with an opportunity to get informed about the level of pollution.

The campaign ‘Protect Your Children From the Invisible Killer’ aims to raise awareness among parents, teachers, grandparents and other groups of citizens regarding the risk of air pollution to which children are exposed. The main focus of this activity are children as a result of systematic work conducted by PEN and the Science for Change Movement on air pollution in Faik Konica primary school in Prishtina. (These measurements, which have been taking place since 2014, showed a trend of increased pollution in the very area of this school). 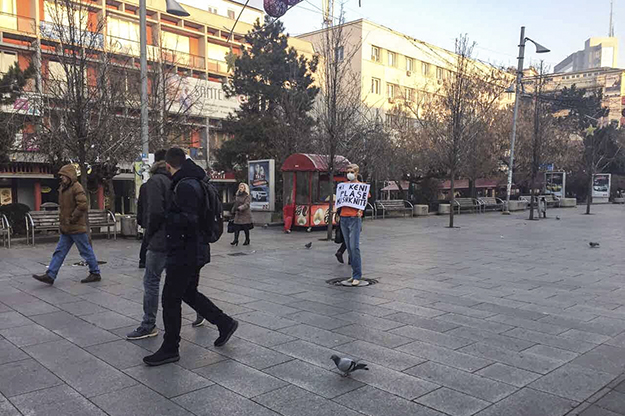 Due to the lack of institutional transparency, we are trying to “democratize air” through air pollution measurements and mobilization activities. We believe that the air in Kosovo is “corrupt,” because Kosovars have no idea what they breathe, they are not informed at all about the health hazards and how to protect themselves from pollution; and because there is no proper institutional support.

Surprisingly enough, the air – this common good – which is often used as a symbol of freedom (which is another common good we all enjoy), has turned into a symbol of deadly poison. Freedom cannot be complete without democracy, and democracy today is facing crisis – which is reflected in political, social and economic crisis – but also in the existing environment in Kosovo. Thereby, “air democratization” is no less important than the democratization of politics, the economy and so on.

We will continue to look into air pollution in Prishtina. If the situation does not improve and if the institutions continue to be silent towards this alarming situation by not taking concrete and immediate measures, the activists will organize other protests in the upcoming weeks.