Rebekah: DJing is about sharing energy

Arriving late Friday (Sept. 15) afternoon in Prishtina, the Berlin-Based DJ, Rebekah, looked fresh for her gig at the Oda Theater. She was set to play right after local DJ, Toton, starting around 2 a.m. and continuing way into the the morning. Her harder techno sounds cast the presence of something enormous and powerful, and had an electrifying effect on the audience, quite in contrast to her smaller figure.

Born in Birmingham in the U.K., Rebekah has almost 20 years of experience in DJing, though with some pauses and style changes in between. Her visit to Prishtina was part of the “Fear Paralysis” album tour, and was set up by local promoters Next Level, who were celebrating their 11th anniversary, and discovered the DJ through her set at Exit Festival in Novi Sad.

In her early days, Rebekah used to experiment with different sounds and genres. From troubled teenage days, she now supports a healthy lifestyle, where the gym and a vegan based diet are her daily choices. Living in Berlin, the vegan capital, has made it easier, but the city is also the capital of the global techno scene, giving her the freedom and a boost to her creativity. It’s the place she always dreamed of living.

Talking to K2.0 before her set, Rebekah discussed the story of her career, parties across the world, the merits of laptop and vinyl mixing, and what she’d advise any women seeking to forge a life as a DJ. 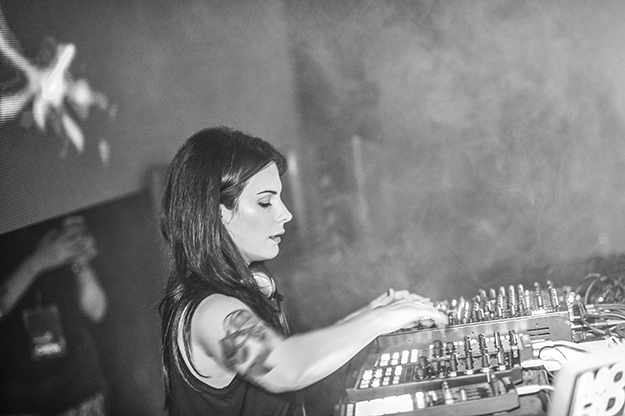 K2.0: You mentioned that you knew you wanted to be a DJ since you were 16 years old. How did it all begin? Were you a clubber at the time?

Rebekah: I’d been out to a couple of clubs, and I remember being at the club and looking at the DJ, and thinking: ‘That’s what I want to do.’ The DJ that was playing then was a guy called Scott Bond, who played this epic house, then later moved into trance, and was one of the biggest trance DJs in the UK. His family knew my family, so it was quite accessible. DJing is open and is for everybody, not for some select people or an elite, or anything like that.

It was partly that, and partly being in a club, where it felt like I had found a home. My teenage years were a little bit troubled so when I got to the club it was an escape from that kind of life. So I wanted to be part of that. It felt like something I fit into.

When did you first start your DJing career? What kind of music did you play at the beginning?

I got my turntables just before I turned 17, and I was practicing for about a year but I actually played out really quickly. I had my first gig within the first year. I played out at friends parties, or my friends would get me gigs. Then I worked at a couple of clubs and played there. I wasn’t really good at that time, but I managed to get some gigs here and there.

Then, when I moved to London, I started modeling, because I was young and I needed the money — the cliche! I got approached by an agency, and they were like ‘yeah we can put you out,’ because they could see that I would be easy to market but they didn’t really respect me as a DJ. I was like 19 or 20 years old, but because I was so young, I thought ‘yeah, I’ll do it.’ I would pretty much do whatever, I just wanted to DJ.

They started getting me out onto the circuit and from about 2000 to 2004, I was DJing house music in the UK. I did some gigs abroad but most of the stuff I did was in the UK. At some point I realised that I didn’t really like the music, and it wasn’t what I really wanted to do, so I stopped.

"I have done all the partying, I have partied with the best of them. At some point that becomes really boring."

I left my agency, I left London and went back to Birmingham, where I started finding out what I loved about dance music again. It was all the early stuff that I used to listen to, Chicago house and techno. Then this minimal thing happened and it helped me realize that my love of techno music was still there, and it never died.

I went back to college, I studied, and then started learning how to make music, and started making music. That process, from leaving London to getting signed to another label, took me about eight years. It doesn’t seem that long now, but at the time so much stuff happened that it was like starting again. That is why I’ve been DJing so long. I had like two separate DJ careers. This time around, I just play what I love.

At some point you joined Chris Liebing’s CLR label. How did that happen?

Chris started playing a remix of mine and then asked me to do a podcast for him. Then he kept asking for more music, so I kept sending him more and more and eventually I was invited to join the crew. It was kind of my dream because I’ve been DJing on my own since the early 2000s. I was never connected to anybody and I really wanted that experience.

Clean living, veganism, these aren’t always the first associations with techno culture. How do you balance being a DJ, and living a healthy life?

For me there is no other way. I have done all the partying, I have partied with the best of them. At some point that becomes really boring, because you just have the same experience over and over, and it never really helped with my mental space. So for me, on a personal level, that was the only way.

I’ve met a lot of techno guys who have big labels and really big positions in the industry, and they never gave me the same feeling that I got with Chris. If you ever meet Chris Liebing, he is just so warm, so open, and that attracted me to CLR. Not all of them are about clean living, some drank, some partied, but it was a lot more accepting of everybody’s choices and that was really appealing to me. It was more spiritual.

I’ve been around and a lot of house guys in UK and a lot of the time if you are not partying with these people, your career doesn’t go anywhere because you have to be out there partying for days on end. I did not want to do that anymore. It ruins my body and I didn’t have any more energy to give to the music and to creativity. Being with this collective there was a lot more freedom to be creative. 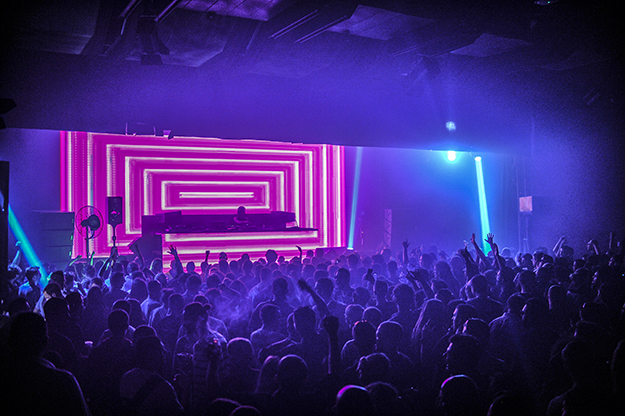 For Rebekah, her job as a DJ is simply to function as a medium to create energy. Photo by Petrit Rrahmani.

What do you love about DJing?

I think DJing for me is about energy, the energy between myself and the crowd, but also allowing the crowd to interact with one another and share that energy. I don’t like it when all the focus is on myself, because I’m only there as a medium to create this energy. That is what I like about Techno. Because there’s no vocals, it’s more primal. I want people to experience that, because I’m always recreating what I experience. I fell in love with this music and that is what I want to put out there.

There are some people that criticize DJs, because almost everyone is mixing on a laptop instead of using vinyl, losing the creativity, and the skill, and even sound quality. How do you feel about these technological advancements and the way they have affected DJing?

I just think technology moves forward and we shouldn’t be bound to tradition in that sense. Yes mixing two records on two turntables is a skill, and beatmatching is a skill, but we can not just dismiss technological advances.

It’s all about the individual. If a new person comes through and he is more comfortable with CDJs, let that person play with CDJs. It’s more important to look at the outcome of the CDJ mixing, or the laptop mixing, or the vinyl mixing. There are bad DJs in all of these mediums, and there are really great DJs working in all of them too, so we need to change the focus on to what’s coming out of the speakers. Does it sound good in the club?

Personally, I don’t want there to be a wall between myself and the people. Traditional vinyl DJs turn their back on their audience, because normally the records are in the back, so when you mix there is a block there. But all of them are just a medium to create energy. They are just tools that we have, and we can’t be dismissive of any of those.

You have been around the world playing techno. What would you say was your most peculiar, or crazy experience from the audience or the people you met?

I’ve played pretty much everywhere, maybe not Antarctica, but it is on the list. I have traveled to Asia quite a lot and played in China eight or nine times over the years. The last time I was in Kunming, in the Yunnan province in the south, where they are really known for spicy food, and the people there have lots of passion.

I played in this club, and they prewarned me. They said: ‘Look, the people go crazy, but they will only will go crazy for a very very short space of time.’ So for about 45 minutes I played and it was like being at a rock and roll gig. I think there is a video online. People were literally hanging off the ceiling, screaming, stage diving — it was pretty crazy. After 45 minutes, everyone just died and they had to leave. It was too intense so they burned out really quickly. That was interesting.

Asia for me is becoming a great place for techno, there are some really good clubs opening out there. They’re usually small and intimate, which I like, and people have got really good energy. 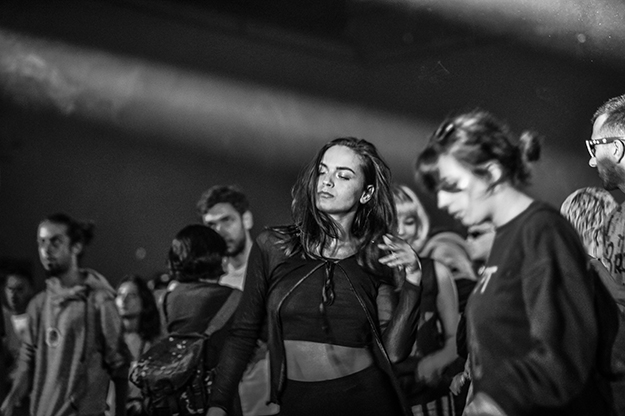 Having played all over the world, Rebekah appreciates Balkan crowds for their desire to party. Photo by Petrit Rrahmani.

What about the Balkans? You’ve had the chance to see some parts, like the gig you had at Exit Festival, or in Kotor in Montenegro. What do you think about people here? Is the energy different?

They are a little bit cooler, but they do like to party. I played in Sofia as well, and that was a really nice party too. The people there… the girls are always amazing, they’re really beautiful. I think in all of these areas the women are very lovely looking, and when you have a really nice mix of women and men, and they all like techno, it’s a really good atmosphere.

What would you advise any other women looking to become DJs?

My role model when I started was Scarlett Etienne. She was producing music, and she inspired me to make music, to understand that just DJing alone wasn’t going to get me anywhere. It would get me gigs in my city, but to get out into the world, to take things further, I had to make music and to have a label. It seems like quite a big thing at the time, but it is an easy thing to do. You just have to work really hard.K