Rediscovering Belgrade in the heart of a pandemic - Kosovo 2.0
Perspectives | COVID-19

How a virus sheds light on where you want to be.

Days after I arrive in Belgrade, Serbia closes its borders.

I knew there was a likelihood of this when I decided to travel. But, on balance, I thought it better to be shut in than shut out. For the previous couple of weeks, I’d been glued to the news as if watching a slowly approaching tidal wave. Moments like these sharpen your sense of where you belong, where in the world you most want to be, and it turned out this was Belgrade.

I’ve spent a lot of time in the city over the last 20 years. Though I was born in the UK, my family is Serbian. Friends and relatives live here. After London, it’s probably the city I know best. But, before now, I’d only ever spent one and two weeks here at any one time, a perennial passer-through.

The country shuts down. A curfew is imposed, from 8 p.m. initially, later extended to 5 p.m. – 5 a.m. The over 65s are instructed to stay inside at all times, only allowed out once a week to the supermarket between the hours of 4 a.m. and 7 a.m.

Armed police can be seen patrolling the streets and they begin to build a temporary hospital at Belgrade Fair.

President Aleksandar Vučić appears on television to make a tremulous address about the need to protect “baba” and “deda” which makes my mother bristle with resentment. I am not a fucking grandmother, she grumbles.

The street on which she lives, once cacophonous, with men aggressively revving their motorbikes and drivers pounding on the car horns, becomes suddenly, eerily silent. One morning, I wake up to find there is snow on the rooftops. I make a joke about losing track of time. How many months have we been inside I say? What year is it again? My mother does not find this funny.

Armed police can be seen patrolling the streets and they begin to build a temporary hospital at Belgrade Fair. After the first few days people begin to emerge onto their balconies at 8 p.m. to applaud in a gesture of solidarity for Serbia’s medical workers. It’s clear I am going to be here for a while.

Over the weeks that follow I become intimately, overly familiar with the routine of the person in the apartment above me, his morning exercise sessions and afternoon piano practice.

Over the weekends, when we are not allowed to leave the apartment at all, I find myself standing at the window watching people in the building across the street pacing in circles around their small roof terrace. Without warning, a friend has his two-week quarantine period extended to a month, 28 days inside. 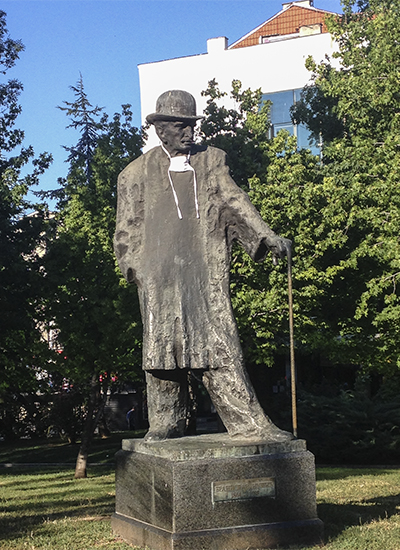 During the week, I can at least still go out for short walks around the block, but when I venture outside, I find myself feeling increasingly anxious, terrified that I will become an inadvertent vector of disease. I am relieved when I return to the apartment. Fear is as contagious as any virus.

Over the Orthodox Easter weekend, an 84 hour curfew is imposed. Our neighbor, who has not left her apartment in over a month, says it reminds her of the 1990s.

One night we hear whistling and clanging from a building further down the street. The next night the noise grows louder and more coordinated. At precisely 8:05 p.m., following the regular applause for medical workers, the clapping and cheering evolves into “bukom protiv diktature” (noise against dictatorship), a carnivalesque expression of frustration at Vučić’s heavy-handed tactics.

Someone down the street drags their speakers onto their balcony and blasts out songs by Goran Bregović. Predictably, someone produces a guitar and sings Bella Ciao. One evening, having watched all this unfold for several nights, a stern, older woman in the building opposite ours brings out a saucepan and begins to bang it with gusto.

Some argue that these protests are futile and while, of course, their impact is minimal, there’s something potent about this act of communal noise-making. During this period of physical, psychological and social isolation and uncertainty, this spontaneous balcony orchestra provides some sense of release and a reminder that, despite being shut inside, nobody is alone.

After a few days of this the counter-protests begin. Torches burn on rooftops, fizzing red against the night sky. The elections are still set to go ahead in June.

The day after St George’s day, the curfew is lifted. Bars and restaurants begin to reopen, with the waiters wearing face shields and masks. The first coffee we have outside the apartment, our hands slick with sanitiser, tastes incredibly sweet, if faintly illicit.

Miladin Ševarlić is the first MP to go on hunger strike, to protest the government’s “failure to apply Resolution 1244” in regards to Kosovo, in what he terms a violation of the territorial integrity of Serbia. Boško Obradović, the leader of the nationalist Dveri party decides to join him in his protest, demanding that the upcoming elections are delayed, then two members of the ruling Serbian Progressive Party begin protests of their own. Let me get this straight, I ask my mother; they are protesting his protest? So it would seem, she says.

There’s a tentative but growing sense that Serbia has beaten the pandemic, which the government not only does not contradict, it encourages.

Ševarlić gives up quickly, annoyed that his gesture has been overshadowed, but Obradović sticks it out. When I walk past the National Assembly a few days later, I see him sitting alone in a tiny patch of shadow on the steps with no one else around, no audience.

Gradually people begin to relax. More and more people wear their facemasks in hammock-fashion under the chins, if they wear them at all, and there’s a tentative but growing sense that Serbia has beaten the pandemic, which the government not only does not contradict, it encourages.

The tree outside my window, its branches naked when I arrived, is now in leaf.

It rains on and off through most of the month, sudden downpours, lightning forking across the sky. In western Serbia there is flooding. At night we stand on the balcony and watch the rain sheet down, as a river forms in the street below.

On dry days, I go for long walks, revelling in the familiar scents and sounds of the city, looking for glimpses of the Belgrade my mother would have known as a young woman. One morning I turn a corner and almost tumble into a hole. The entire pavement has been dug up by workmen, a reminder that, in Belgrade, you should never take the ground beneath your feet for granted. 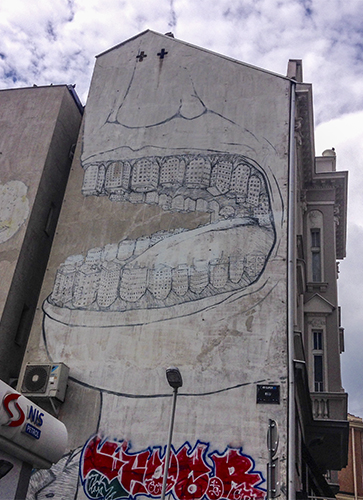 On June 7, 4,000 people who had previously tested positive are declared to have been cured, dramatically reducing the number of active infections. On June 10, nearly 25,000 people gather to watch Partizan triumph in the Belgrade Derby. The lives of my friends in the UK are still on pause, but here things feel relatively normal. The ruling party’s attention is focused on campaigning as the election approaches.

This takes place, as planned, on June 21. Despite calls for a boycott and a low turnout, the Progressive Party wins a large majority.

Then things shift. BIRN publishes a report based on the country’s COVID-19 system data, that seems to show the country has underreported its COVID-19 infection and death rates, that in the period running up to the election, the numbers of newly infected has been in the ascendancy. Novak Djokovic tests positive. Several key government figures — including Defence Minister Aleksandar Vulin — also test positive, as pictures circulate of them with their arms around one another at a post-election victory party.

Prime Minister Ana Brnabić and Health Minister Zlatibor Lončar are jeered at by angry protesters in Novi Pazar, a town which is particularly badly affected. Brnabić blames their response on “fake news.”

After a month of rain and grey skies, the sun comes out.

The numbers of newly infected continue to rise. A season of outdoor performances at Tašmajdan stadium, organized by the city’s theaters, is canceled.

Blame for the increase is laid with students and their dorms are ordered to close. The students converge on the National Assembly to explain that to send them all home to their families will just cause infection to spread. The decision is swiftly reversed.

Then, on July 7, Vučić announces a new weekend curfew, a return to the intensely restrictive measures of March and April, and for many it’s simply a step too far. Protestors descend upon the National Assembly; a few even managing to push their way inside.

A distraught young man explains, in the heat of fresh grief, how his father died from COVID-19. There weren’t enough ventilators. Father, this is for you, he says. Teargas is liberally deployed. Batons are wielded. People are beaten. 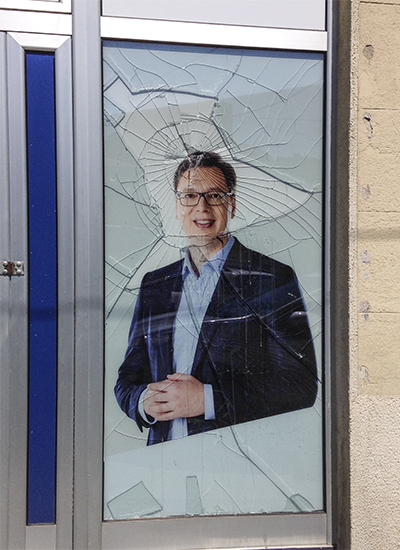 Though her eyes are painfully red-rimmed, N1 journalist Jelena Zorić, does not stop reporting from the heart of the protests. We watch her until well after midnight. Meanwhile RTS, the main state broadcaster, shows a Jackie Chan movie.

Footage circulates of three men on a bench being hit by police. Footage circulates of a young man curled on the street as multiple police officers beat him. The next afternoon, I see vast numbers of police in riot gear, some on horseback, gathered behind the National Assembly, warming up for that night’s performance.

The second night of protests are even more volatile and combative than the first. Teargas. Batons. Several journalists are assaulted. When we venture out on the balcony, several streets away, our throats begin to burn and we retreat inside.

On the third night, something changes. Young people, determined to take control of the protests, use non-violent techniques to defuse and reclaim the situation. They sit on the ground and insist others do the same. There is hugging and singing. When a group of rowdier protestors show up, they are shouted down. It is a moment of hope.

It does not last.

On the fourth day I spot a man selling whistles, bandanas and “V for Vendetta” masks outside Pioneer Park. This time the police stand in tight formation in front of the building, riot shields raised, as a small group of masked, jacked-up men hurl things at them and try to provoke a response. The rest of the protestors mill about uneasily. The sense of resistance and optimism of the previous evening has been obliterated.

Fear is contagious but so is hope.

Over the next days, the protests refocus on the release of those arrested. Face masks are made compulsory. Limitations are placed on the number of people who can gather publicly. Vučić announces that he will train as a basketball coach. He announces that Serbia will have a vaccine by the end of the year, ahead of other countries.

Belgrade’s usual bustle is noticeably muted. Over the last few months my mental map of the city has evolved, my vocabulary has expanded, and my connection with and affection for the place has in many ways deepened, despite the sense of low-level disorientation and weariness that sets in after a while.

The continual truth-bending is tiring, but it’s also offset by the palpable sense of people wanting something better. Fear is contagious but so is hope.

That night I stand on the balcony and watch a silent storm in the distance. Flashes of light fill the sky, but the rain never comes.