Robert Bisha: Folk Music is people telling things as they are

Pianist discusses blurring the lines of the traditional and the experimental.

On Saturday night (Aug. 5), on the windy mountaintop that is home to the Prizren fortress, DokuFest attendees were treated to a sublime concert featuring a collaboration between pianist Robert Bisha and the Albanian Iso-Polyphonic Choir. Bisha joked that there was also a third collaborator, describing the three main players as “piano, polyphony, and the fresh breeze.”

Bisha was born near Shkoder in the north of Albania in 1984, and started playing piano when he was just six, studying at the “Prenk Jakova” music institute. By the age of 12, he was playing his own compositions in the Albanian classical scene. He would later flourish into an experimental multi instrumentalist, with a special love for the classical pianoforte, which he studied at the Girolamo Frescobaldi music conservatory in Ferrara, Italy.

Outside of the piano, Bisha is also a keen player of the accordion, the guitar and traditional percussion instruments. His performances are a sight to behold; when playing a piano he makes use not only of keys and pedals but also the strings and hammers, when playing guitar he just might use the bow from a violin.

He did not grow up with an interest in traditional music, that only came after a long time studying in Italy. One day he heard a folk motif played on a cifteli (a plucked Albanian instrument with only two strings) that fascinated him. “It was something between pagan and mysticism,” he told Albanian newspaper Panorama last year. “I did not remember it being so beautiful.”

His new affinity for folk, he says, goes deeper than a touristic or exotic interest. He believes that traditional music should be experienced, lived, it should be a passion, and a field of study. The pieces he now composes are reminiscent of traditional Albanian folk songs, although he admits that they are mainly just that, compositions. His musical style also regularly includes improvisation, whether in solo performances or as a harmonic response to other musicians. 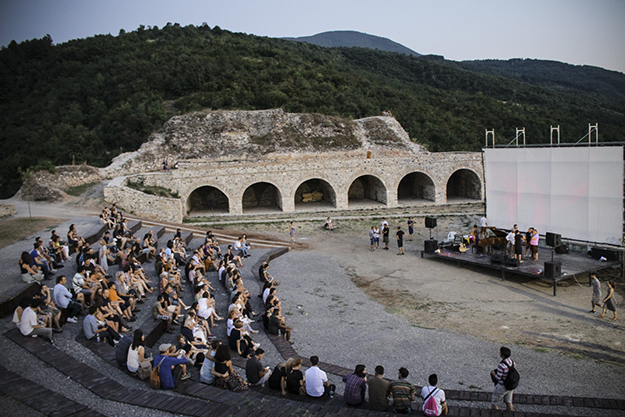 Saturday’s concert was the group’s first in Kosovo, and the first to take place inside the fortress walls since its renovation. Photo Agan Kosumi / K2.0.

The show at DokuFest was the first time that Bisha and the Albanian Iso-Polyphonic Choir had held a concert in Kosovo, and was intended to celebrate the newly renovated fortress in which it took place. Managing to transport the piano up the hill to the fortress was another special feat, that as far as Bisha knew had never been done before, and of which he was especially proud. K2.0 caught up with him after the show to talk polyphony, tradition, experimentalism and the piano.

K2.0: Are you pleased with the concert? Did everything go as planned?

Bisha: We don’t usually make any plans. There are some expectations, but what comes, comes, so we welcome it and try to make the best of it.

What do you find so attractive about polyphonic music, and how long have you been working on these collaborations?

Your music is quite experimental, yet you have you chosen piano, a classical, or a traditional instrument if you wish, to perform it…

Piano is one of those instruments which has been used the most, and in the most possible ways. Ever since 1900 from Weber, and later with John Cage, the piano has been used in every way imaginable. It is not traditional, because ‘traditional’ does not exist — it is a manmade concept, created in order to keep something in place, but everything is in evolution, and in movement.

Do you feel that the polyphonic music is growing? Is there a newly found attraction to it from younger generations?

There is an attraction, but polyphonic music has been a bit hidden. When we were young, polyphonic music was not really that spread out across the country. In the north, where I lived, it wasn’t listened to. To be honest, as soon as we saw polyphonic music on TV, we would change the channel to something else. But, in recent times we have begun to develop a relationship with the south of Albania. Although we are a small nation, we are somehow divided in this aspect of north and south. 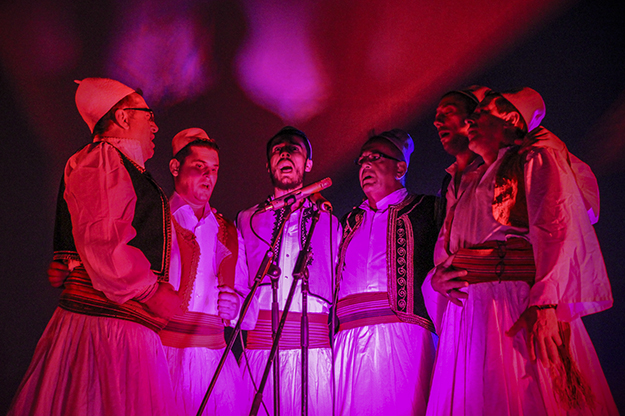 The tradition of polyphonic vocal music in Albania was declared a ‘Masterpiece of the Intangible Heritage of Humanity’ by UNESCO in 2005. Photo Agan Kosumi / K2.0.

Now polyphony has gained momentum, and has started being listened to more, although often with these turbofolk transformations, which are not that useful in my opinion. But moments come when people our age get it and say “Okay friend, I do not need to listen to turbofolk anymore. I’m going back to the origins, to the the cell, the healthy cell, and I’m going to work with it,” like other authors are doing.

The music that we heard at DokuFest felt like a collaboration between the old and the modern, the traditional and the experimental. If more of these cooperations happen, would they give traditional music a nuance of the contemporary? Do you think it would be more popular, more successful?

I do not think that all my work should be for success. I think that my work should develop my point of view. For many, the traditional is the polyphony, while the experimental is the piano, regardless of the fact that inside the concert, there are not only traditional polyphonic parts. There are bits sung in a polyphonic manner, but that are composed. I have composed new polyphonic parts, which I will call new, but I have put them into a relationship with the piano and other instruments.

But where I want to stop is that for me, the “traditional music” as many people call it today, the folk music, the music of the people, is always remarkably modern. There were many composers from Bea Bart, up until the last important ones, in my opinion, such as Luciano Berio and the Hungarian composer [Gyorgy] Kurtag, who have had a relationship with folk, with the people.

Folk is this thing which is fundamental, totally fundamental. It is the people telling things as they are, like directly, boom! In modern music things are also being told as they are, and when you hear them in music you say ‘wait!’ because something is happening in harmony together!