Safety in the city

Is Prishtina prepared for a manmade or natural disaster?

Summer 2017 has seen a spate of deadly building fires in Europe and around the globe, most recently in the outskirts of Split, and Honolulu and Oakland in the United States, not to mention the Grenfell Tower disaster in London. It’s a phenomenon that has caused concern about building safety everywhere, prompting K2.0 to look into the situation in Prishtina to see how prepared the city is for fires and other catastrophes.

The number of illegally constructed buildings that appeared all over Prishtina after the war only adds to concerns around safety. Many buildings were built without permits and did not go through the necessary safety inspections and legal processes.

The Directorate of Urbanism at the Municipality of Prishtina has confirmed to K2.0 that specific building guidelines and codes for construction in Kosovo do exist, and that they do not approve any construction plans that do not adhere to them. However, the regulations were only legally required to be developed the last time Kosovo’s construction laws were amended in 2012, meaning these codes are at most five years old, and most people K2.0 spoke to in the construction world seemed unaware of their existence.

Astrit Nixha, head of the Architects’ Association of Kosovo believes that while building codes used to be sacrosanct in Yugoslav times, they are not adhered to as strictly as they should be in the architectural world today. “I can tell you that whoever graduated in Prishtina University before 1991 apply the codes,” Nixha states.

After 1991, when Kosovo Albanian professors were dismissed en masse from the university for refusing to teach a newly imposed Serbian curriculum, architecture, alongside most other subjects, was taught in a parallel education system outside of the state. It’s at this point that Nixha believes that building codes became secondary, stating his belief that graduates after 1991 rarely know about codes, and thus do not incorporate them into their building designs. 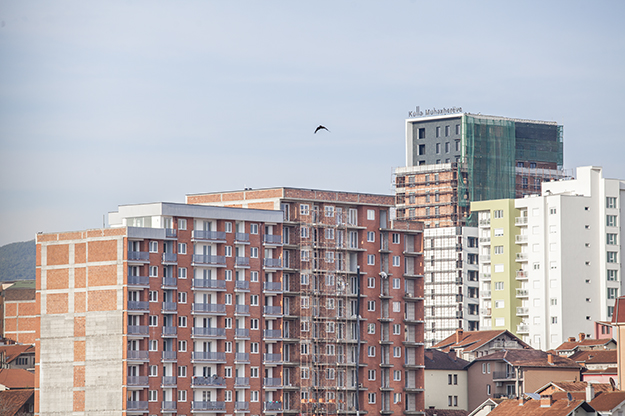 The close proximity of buildings in the capital is a phenomenon that concerns architects, developers and firefighters. Photo: Majlinda Hoxha / K2.0.

Arben Hyseni, project manager for Labi Com, a Prishtina-based construction company operating for around 30 years insists that his company follows European codes, not dissimilar to those of countries like Germany and neighboring Serbia. “From the beginning until now we have not worked without a license,” states Hyseni, though he also expressed concern at the amount of buildings built without permits that now stack dangerously close together.

Labi Com’s business consultant, Besim Callaku, explained the business benefits of adhering to guidelines and codes. “We follow the codes because we think that after 20 years we might have problems with buyers [if we don’t],” say Callaku, adding that in recent years there has been an increased knowledge of consumerism with people more likely to want to see potential homes before purchasing or renting.

However with Kosovo very much located in a seismically active zone, many of Prishtina’s buildings are not equipped to face any potential disasters, man-made or natural. When it comes to buildings that are more likely to withstand earthquakes, Nixha points again in the direction of older buildings: The older the better. “Since I’m an architect and friends ask me, ‘Where should I buy a flat?’ I always say, ‘In the old parts, the old buildings,’” he says. “Whatever was constructed before the war, I tell them to buy.”

He believes pre-war buildings are more likely to have the codes implemented, the structure and materials up to standards, and with seismic calculations made. The same cannot be confirmed about newer buildings, as the boom of illegal buildings started after the war. The Privatization Agency of Kosovo announced last year that it had identified “2,500 illegal buildings on public enterprises’ land.” When current mayor of Prishtina, Shpend Ahmeti, took office in 2014, the Municipality of Prishtina issued a report stating there were 46,000 illegal constructions in the city.

Since demolishing such a huge number of buildings might be unrealistic, the Ministry of Environment and Spatial Planning proposed a law that allowed the registration of illegally-built buildings, which was passed in December 2013. Every square meter of a building built without a permit is being charged five euros for legalization, which is even lower than obtaining a permit before construction.

Nixha says this is a big problem and an injustice to investors who wanted to start construction legitimately. “Investors who want to do the proper professional work are now squeezed into something they cannot get out of,” Nixha says. “Once they finished [construction], they were in credit [with banks], they paid their licenses, all of them, and they have to compete with these people without licenses, without upfront payments in price — they cannot.” He points toward corruption in the government and favoritism shown by officials toward investors they know personally.

“If there are fires happening behind the main street, the fire brigade cannot do anything about it because they cannot reach.”

Fires are one of the key concerns when it comes to the violation of building regulations. Building plans in Prishtina are subject to approval by the municipality, and must be in accordance with the 2011 Law on Fire Protection. The law classifies different types of buildings with different fire prevention plans, but stipulates that in all public premises there must be conditions for the “unimpeded evacuation of people in case of outbreak of fire by building evacuation stairs as well with related equipments for alarm and fire fighting.”

Another key point in the law is that “horizontal and vertical surfaces of exit roads” need to be made from fire resistant materials, while it also states that owners and users of all premises are required to possess fire extinguishing equipment, and that they should be checked once a year. However, these laws have not always been followed.

With the amount of buildings in Prishtina that are built too close to each other, fires not immediately accessible to the fire services via the main streets could easily end in disaster. “If there are fires happening behind the main street, they [the fire brigade] cannot do anything about it because they cannot reach,” Nixha warns. “All the buildings are stuck to one another and there is no access route behind.”

Fatmir Nreci, a firefighter in the Prishtina fire brigade, confirms that there are buildings in the city in which entrances are too narrow and fire trucks struggle to get through. He also identifies further problems with fire fighting in buildings. “Not every building has a hydrant,” Nreci says. “There are also old buildings that have no ladders, every floor of every building should have emergency ladders.”

The head of prevention and research at the Fire Department of the Municipality of Prishtina, Muharrem Beka, also believes the close proximity of many buildings in the capital to be a major problem.

The criteria that his department sets for buildings includes adequate space and at least two routes for the access of fire engines, a functioning water supply, the presence of fire extinguishers and hoses, evacuation plans and routes, as well as fire exits. However, he says construction companies are regularly not following their own plans. “The spacing is not done based on the standards that are enforced,” reveals Beka. “Even if there is space, people just park their cars everywhere, it’s really hard for the fire brigade to access the building.” 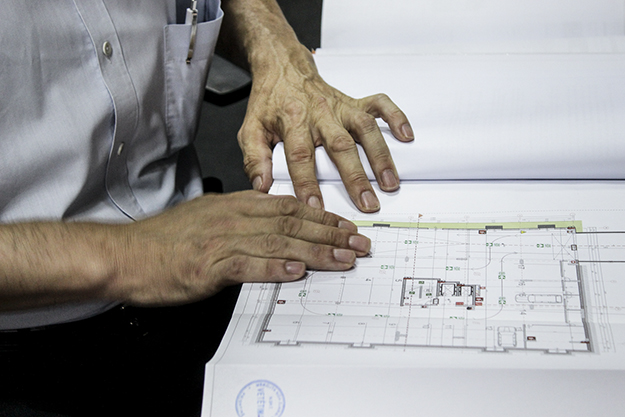 The Fire Department at the Municipality of Prishtina is putting in place new regulations on both building spacing and regular inspections. Photo: Agan Kosumi / K2.0.

Escape routes are another problem, as he thinks that many buildings don’t have enough stairs or spaces in stairways for evacuation or transportation of the injured. However, Beka maintains that most plans submitted to his department get approved, first through graphical representations of their plans and then through physical inspections by separate committees at the construction sites; but of course, these are for the buildings built with permits.

Beka says new regulations are going to be put in place regarding building spacing and also physical inspections of buildings done on a floor by floor basis, meaning inspections will be carried out on each floor once constructed, instead of after the whole building is completed.

But while there appear to have been improvements in building safety in Prishtina in the last few years, buildings without all the necessary safety precautions — and those that were formerly illegal — still stand tall in the heart of Prishtina and with the legalization process introduced they are unlikely to be removed anytime soon. All this leaves behind a cityscape that is unlikely to ensure the safety of its citizens should disaster strike.K