Farija and Bajram Mehmeti have long had a dream: to have an atelier. For the two Roma siblings, who aim to preserve Roma culture through their art, having their own space where they can paint has been more of a challenge than for most artists.

Similarly, having their work taken out beyond the four walls of their modest house in the village of Lepina and getting it recognized has been more than a struggle; their rocky path to recognition has required not only natural talent and years of hard work, but also a readiness to make the most of every opportunity that comes their way.

The pair are also the first to acknowledge the assistance of a handful of people that have supported them in pushing their work forward to the public. In recent weeks, a team of lovers of Farija’s and Bajram’s work have come together to initiate a crowdfunding campaign on KosovaIdeas that aims to raise the necessary sum for the siblings’ atelier. With only one day left to run in the 45-day campaign, they have collected a little over half of the required 15,000 euros, with donations coming both from Kosovars and other people abroad.

“When you have something in your heart, that love attracts you to do it. The love of painting was in me."

With a mixture of impatience and hope, Farija and Bajram have been closely following the campaign’s progress from their simple house in Lipjan Municipality, around 30 minutes drive from Prishtina. The moment one approaches the front gate, Farija’s mark is visible, expressed through the wreath of flowers and leaves painted around the outside wall of the house and the ornate sink in the yard.

Farija and Bajram accompany K2.0 to the small living room, whose walls are covered with Bajram’s paintings that depict the main motives of his work, everyday moments of Roma life, alongside Farija’s portraits of Roma women in colorful scarfs. The room has been the most loyal witness of their life; as the house has only two rooms for the seven Mehmeti family members — Farija and Bajram as well as their parents and three siblings — it serves as a living area, sleeping room and studio.

Farija, 39 and Bajram, 37 have spent all of their lives in the village, where the daily routine passes slowly; the two can sometimes still be found out in the cornfield or collecting wood to help out their family when they’re not in the room drawing and painting. Since all seven of them are unemployed, the family’s only income is provided through seasonal work or the small change that they manage to secure through the occasional sales of paintings.

“That one shows a family working in the cornfield,” Bajram says, as he points toward one of the paintings hanging on the wall. “When Roma work, all of the family gets involved. Which is true. This is also the way that we worked.” 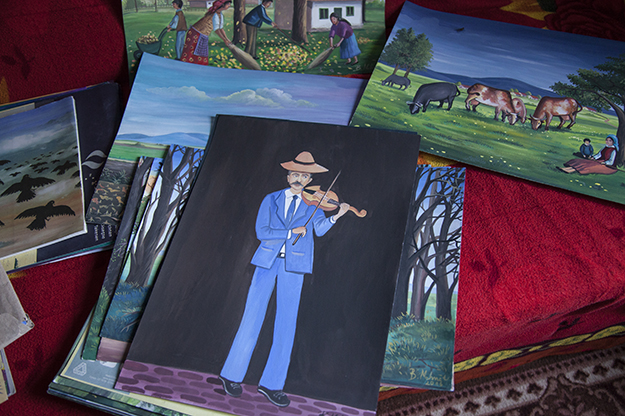 Bajram has known that he loves to paint for as long as he can remember. When he was in elementary school he showed his drawings to his teacher, who didn’t believe it was his own work. Bajram recalls the teacher scolding him and asking why he had given his homework to his parents. But with the passing of time, and Bajram’s drawings getting better and better, the teacher became convinced.

“He told me: ‘If you continue like this, you will become an artist one day,’” Bajram proudly recalls his teacher telling him.

After finishing the local agricultural school in Lipjan, Bajram’s dream of going on to study arts in higher education would be shattered — the poverty stricken household couldn’t afford to send him to the Academy of Arts.

But in 2000, a radio show gave him some hope. He listened to the voice of a local painter, Zoran Zivkovic calling for applications for new students at his painting school in Fushe Kosovo’s Ugljare village and wrote the number down. Without a house phone, his mother asked a friend for whom she was working to call Zivkovic and tell him to register her son.

“When one loves to do something, either as a child, or as a grown up, they will find a way,” Bajram says. “When you have something in your heart, that love attracts you to do it. The love of painting was in me. And I continued to do it.” 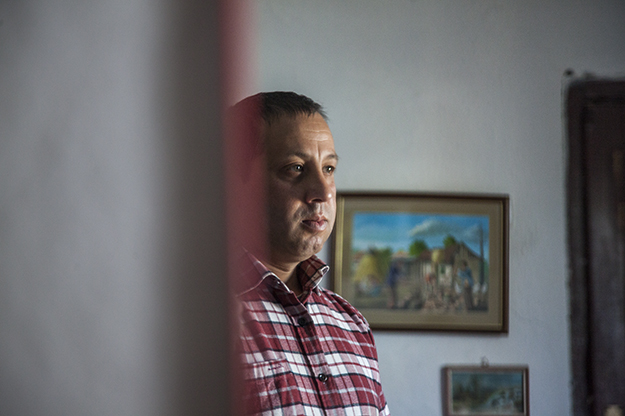 Bajram held his first international exhibitions in 2004, after his talent was spotted by an American author and human rights activist. Photo: Majlinda Hoxha / K2.0.

As there was no regular public transport in the midst of the tense social climate after the war — and it was not uncommon for Roma to be particularly persecuted at this time — and he therefore couldn’t attend classes daily, Bajram says that he arranged to go at least once per week to Zivkovic’s lessons. The Ugljare painter helped the autodidactic Bajram to improve his painting techniques, leading to Bajram’s first ever exhibition, back in Ugljare.

He says landscapes were the dominant topic of his work until 2001, when he met with Paul Polansky, an American author and rights activist, who would have a huge impact on the work of both Bajram and Farija. The writer, who had been working on Roma rights in Kosovo, heard of Bajram and his talent in painting and paid a visit to the family house.

Bajram recalls Polansky suggesting to him: “‘Why don’t you paint Roma life?’” Persuaded to give it a go, his landscape paintings would soon be replaced by the portrayal of Roma people living in tents, working in cornfields, selling watermelons and many other events typical to the Roma community and Bajram’s own life.

“It is said that a painting is worth a thousand words. And every painting I do has a story behind it,” he says. “Many are about the experiences I have had since being a child until now, or stories I’ve heard from other Roma people. My paintings are true stories.”

Polansky’s dedication to help expose Bajram’s work on Roma life led to his paintings crossing the border, with exhibitions in Switzerland and Austria in 2004; Bajram still has the publication “Bajram Mehmeti, Paintings of a Rom in Kosovo,” written by Polansky and Andreas Meier, director of the Seedamm Kulturzentrum, that accompanied the Swiss exhibition.

“Art often thrives in particularly conducive circumstances, where life evolves more easily than elsewhere … ” Meier wrote in the publication’s foreword. “However, art also flourishes under the most difficult of circumstances, precisely where one would not expect it, where it seems like a luxury when the necessities of life are lacking: clean drinking water, sufficient nutrition, and warmth in the cold months of winter. Yet, as if in defiance, it is here where art demands its right to stand forth ….”

Painting from the imagination

During Polansky’s visit to the Mehmeti household in Lepina, it wasn’t only Bajram’s paintings that caught the attention of the American rights activist. He noticed a portrait of a woman, sketched by Farija, hanging on the living room wall.

“When he saw my portraits he encouraged me to paint female Roma portraits,” Farija says. “Back then, I thought, ‘I don’t know, I will try.’ And then I tried and maybe I didn’t do it properly but I continued to do it more and more. And I practiced a lot with my brother.” 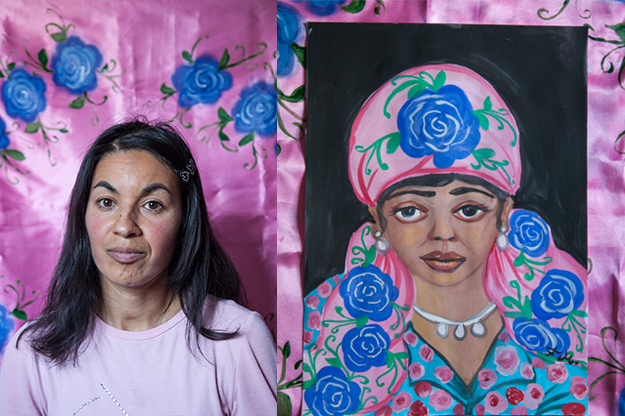 Farija Mehmeti has always loved to draw, with her signature work being portraits of Roma women. Photo: Majlinda Hoxha / K2.0.

Unlike with her brother, her family couldn’t even afford to send her to high school. Until Polansky’s visit she never thought of her paintings in a more professional way, although she had always drawn.

“I always used to take paper and just draw a portrait. Somehow this always attracted me. Before Polansky came, I used to just paint a woman, a beautiful one, with lots of makeup, but she wasn’t like this,” she says, pointing to a more recent portrait. “Not dressed like this, with the scarf that Roma women wear.”

Today, all Farija’s portraits are Roma women, looking reflective, with their hair covered in striking colors. “They might be thinking about their future and their life,” she says. “Just as my brother depicts Roma life, and many others do through music, I want to do it through these scarfs and colors.” 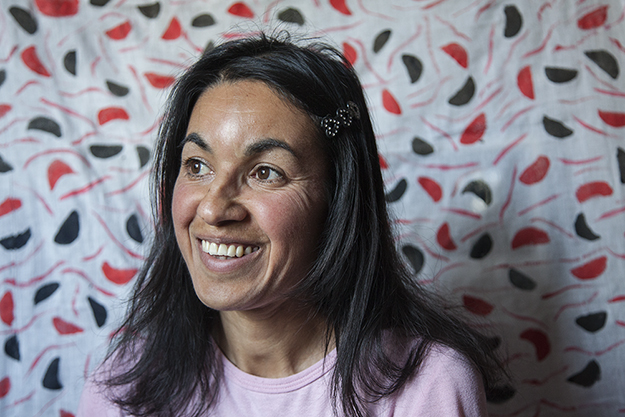 In the future, Farija hopes to sell the materials that she currently paints in the process of producing her portraits. Photo: Majlinda Hoxha / K2.0.

Farija first paints the colorful pattern onto a piece of material, and then paints the same motif onto the headscarf of the woman in her portrait. “I usually paint from the imagination. First I imagine the design and then I do the portrait and the design I foresaw earlier. I would put it down on paper with colors and emotions,” Farija says, adding that in future she also hopes to sell the material that she paints.

“I think Roma women like to wear something similar. I tend to preserve my culture, and I like these [patterns] to be exhibited in Kosovo. So not just for Roma women to have access to it, but women of all cultures.”

In recent years, Farija has begun exhibiting her portraits in ad hoc exhibitions, sometimes as an independent artist, sometimes alongside the work of her brother; the siblings’ first exhibition together would take place in 2011 at Oda Theatre.

“It’s really important to have our atelier because we plan to also use it for the children of the village, somewhere that they can come and improve their talent."

But both Farija and Bajram agree that the exhibition they have enjoyed the most was one the following year at Prishtina’s National Gallery that was organized by then-director Erzen Shkololli to mark International Roma Day.

Having been familiar with their work since 2009, and aware of their struggles to get a studio, it was Shkololli who recently took matters into his own hands. Over a month ago, now as the director of the “Une e du Kosoven” (“I Love Kosovo”) Foundation, he initiated the current crowdfunding campaign, with the aim of collecting the money that would enable the construction of a small studio in the Mehmetis’ garden. A team of people have come together to create an architectural design and to plan out all of the technical aspects.

“The conditions we live in continue to be difficult,” Bajram says. “It’s really important to have our atelier because we plan to also use it for the children of the village, somewhere that they can come and improve their talent. I know from my own experience how important it is when you have the possibility of being mentored and a space in which to paint.”K

You can read more about the crowdfunding campaign, which ends on Friday, November 3, here.