Finding resilience in the face of hardships has become almost a necessary survival mechanism for Arlinda Koshi.

In the past five years she has gotten divorced, taken full custody of her children and has tried hard to provide a smooth emotional transition for her two sons, all while working more than full time hours. On top of her regular public sector job she also takes on extra work doing anything else she can, from translating to writing reports, in an effort to provide a secure life for her children.

The insecurities that have come with the last year of pandemic have only added additional burdens to the single mother in her 40s.

Koshi knows that the challenges in her life can hardly be put down to plain luck, and that her words need to be perceived from a perspective of a societal system that is not equal nor just for women.

“Then the virus explodes and there is not a single measure to relieve my life or the lives of all these women.”

The group she refers to is the Single Parent Association, where she frequently volunteers and holds the position of deputy director.

The organization aims to help single parents through their various struggles in the post-divorce period. With the exception of two men, all members are single mothers, often let down by the state and discriminated against by institutions in terms of their right to alimony and shared property after prolonged and traumatic experiences in court.

“Then the virus explodes and there is not a single measure to relieve my life or the lives of all these women,” Koshi says. “How is it that the state doesn’t get what it is to be a single mother in this country and how bad it is for our children? Us women and our children are stigmatized and bullied.”

She says a phrase that she often hears, even from her acquaintances, is “Poor you,” and it makes her feel victimized and without agency.

All parents have been facing a hard time during the pandemic, with the added burdens of helping their children with online classes and schoolwork, and attempting to maintain healthy routines and ease increased anxieties. But there has been little recognition of the particular needs of single parents, who are often left to juggle all of these extra challenges alone.

Since it is usually women who take responsibility for the children after a partnership breaks down, the hidden experience of single parents during the pandemic have often been highly gendered. Rather than acknowledge and respond to particular needs, institutional responses to the pandemic have instead often further exacerbated existing inequalities.

Single mothers already lack public support, regardless of the pandemic, with the burden even heavier for those who are also unemployed. Left between stigma and economic hardships, to date, no government institution or relevant agency has taken steps to even monitor, for instance, the number of women who are single, unemployed and mothers; this translates into a lack of policy solutions.

Even when policies do exist, they are often ignored or overlooked. During an analysis on the ground, the Single Parent Association found that the children of many single mothers are not in preschool, despite legislation providing the opportunity for single parents to send their children to public schooling. Koshi and the Association’s director, Arjeta Gashi, say that the municipalities haven’t made enough of an effort to inform parents of the administrative instruction that directs this policy.* 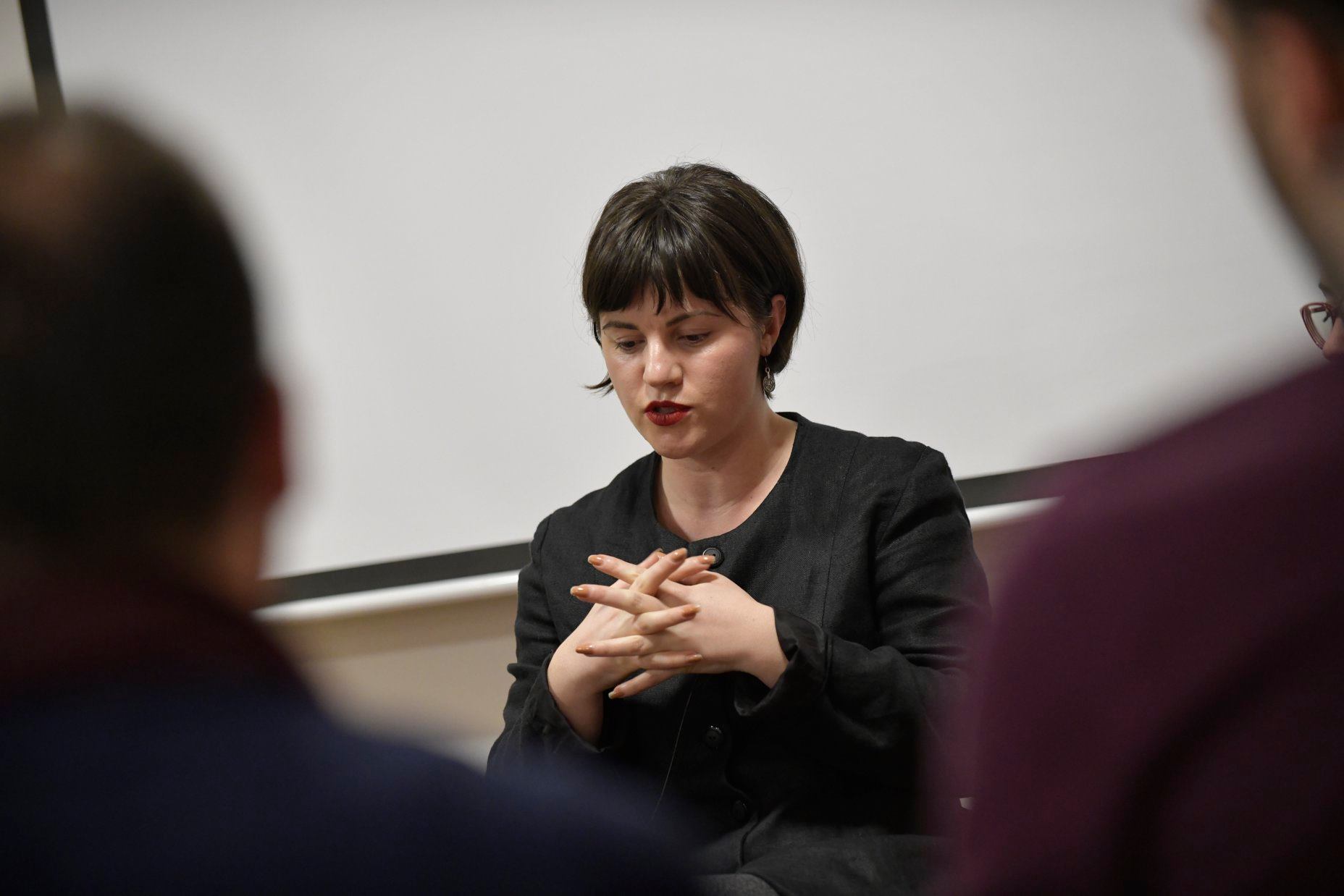 Gender expert Mirishahe Syla says that the range of measures introduced by government to try and combat COVID-19 have been “directed to Albanian men that are already in work.” Photo: Atdhe Mulla / K2.0.

Since the beginning of the pandemic women’s rights activists have repeatedly lobbied for the gender perspective to be integrated into the measures taken against COVID-19, and have criticized the lack of action in this regard from policy makers. Instead, measures have been one-dimensional, envisioning a particular family model and thereby excluding the specific needs of individuals.

Feminist activist and gender expert Mirishahe Syla says that all the measures that the government has taken, both to prevent the spread of the virus and to start the economic recovery, clearly reflect the lack of a prior gender analysis or consultation with civil society.

“There is no measure of how different people are affected by the pandemic,” she says. “They are directed toward a homogenous group in Kosovo with the perspective that all are the same, without taking account of any special needs. Women are forgotten, single mothers are forgotten, minorities and people with disabilities are forgotten. Measures are directed toward Albanian men that are already in work, with the government taking only the model of the man that has a business and particular incomes.”

Koshi agrees, believing the needs of single mothers haven’t even crossed the minds of those in government. She says how during the lockdown period, with rules forcing protracted periods in confinement with their children and increased constraints, single parents faced unprecedented struggles of panic and fear during the outbreak.

After the closure of schools and kindergartens in the second week of March last year, newly introduced governmental measures stated that if both parents in a household were working, employers should allow one parent to stay at home. The Single Parent Association says they clearly observed that in many cases private sector employers were not implementing the decision for single mothers, reasoning that provisions were not explicitly made for them in the government’s decision.

“It is always like you have to push twice as a single mother.”

After complaints, then Minister of Justice Albulena Haxhiu clarified that the provision also applied for single mothers and called upon employers to implement the government’s decision. However there has still been no thorough analysis of the private sector to provide an accurate assessment of the extent to which the decision was implemented up until the country opened back up in May and June.

“It is always like you have to push twice as a single mother,” Koshi says before giving an everyday example from her life. “For me it was easier to get the divorce than to change my last name.”

She explains that she has to keep the court’s decision with her “as a bible” at all times because she is always having to explain to utility companies and others why her surname doesn’t match the name on their records.

“And when I do that it takes me back to painful times,” she says. “Because neither the municipality nor the state bother to facilitate things and create a database where last names are [updated] for every company.”

In light of her experiences in regular times, “it’s not a surprise how single mothers are treated in pandemic,” she says.

Three years ago, in an instant, Aida Jamini became a single mum of two kids. On the fifth anniversary of their marriage, June 14, 2018, her husband suffered a sudden abdominal aortic rupture. Just three hours later, he passed away at QKUK with Aida by his side.

K2.0 interviewed Jamini last April and she expressed how the prospect of getting COVID-19 would be especially daunting for her as a single parent who could be left caring for young children while battling a serious, contagious disease.

Many examples around the world have shown how some parents have taught their kids to recognize when to call emergency numbers, in case they are incapable of doing so themselves, so the children are prepared for all possible scenarios. Jamini would later find herself doing just that.

During the lockdown, when schools were closed, the daytime hours were harder for her as she works online; she is employed as a translator at a public institution and repeatedly had to switch from working to play activities with her two boys, aged 7 and 5. Often, the games were transformed into stories about their father, lessons about life, and what happens when someone dies. 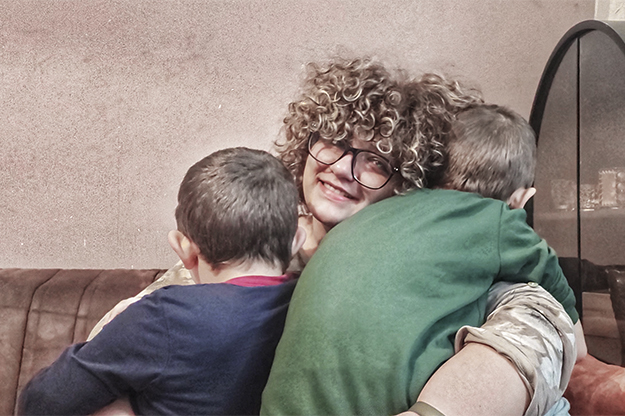 When Aida Jamini caught COVID-19 last Fall, she had no chance to follow the medical advice to rest as she still had to do everything to take care of her two young boys. Photo: Aida Jamini.

Reflecting one year after COVID-19 first swept Kosovo, Jamini says that she never imagined that after 12 months the world would still be afflicted by pandemic and wearing masks would be the norm.

After the initial period of total lockdown, the easing of restrictions brought new concerns. “My biggest anxiety was not to bring the virus home,” she says.

Autumn came and Jamini’s routine started early in the morning, taking one child to preschool and the other to elementary school, before going to work herself.

“The repeated words were: ‘Do not take off the mask, disinfect your hands,’” she says. “Then as we returned to the apartment, it was: “‘Take off your clothes, take a shower.’ And I traveled every day, and as well as adding to my anxieties this also made me physically tired.”

Then in mid-October her anxieties became reality, as she tested positive for COVID-19. Following the prescribed response for those with milder symptoms, she confined herself, with her children, in the apartment, and they took to wearing masks while doing online learning and other activities together.

She was also ordered to rest. But that is the one thing she didn’t have time to do in between caring for her children and doing the housework, all while struggling with the debilitating virus.

“At one point, I could barely stand on my feet and told my boys: ‘If you see that Mommy isn’t feeling good, call your uncle,’” she recalls.

Having taught the two boys how to call their uncle, they slept for three weeks with the apartment door unlocked, in order to enable her brother to enter freely in case she passed out from exhaustion.

More than four months after having had the virus, Jamini still feels physically and mentally drained, a tiredness that is exacerbated by anxiety about potentially contracting the virus again.

“Even the virus is unequal.”

Syla says that Jamini’s experience is not uncommon for single mothers.

Many live with their extended families and, as with the majority of women in Kosovo, carry the burden of unpaid labour such as caring for others, food preparation and cleaning. Syla says that unless they are physically too sick to continue, when women contract the virus, they will continue to prepare the food and do all the other housework, while their infected male relatives take the time to rest and have all the care provided by the women in the house.

“Even the virus is unequal,” Syla says.

Increasing the intensity of Jamini’s situation, last summer she and her two boys moved from the center of Prishtina to Fushë Kosova, adding the task of settling into a new home to her list of jobs. She says that she was lucky to have been able to send her children to her parents’ house in Montenegro for a while while she took care of the moving process.

“I say lucky because it would have threatened my job,” she says. “I’m not sure, at that time, I would have been able to take care of my children, moving and so on. Maybe I’m using this luck thing too ironically, as in these situations us single mothers are always forgotten and in the end we need to rely on our own endeavors and strength to survive.”K

*Editor’s note: This article was edited on 15/03/21 after publishing. The originally published version stated that Koshi and Gashi said that municipalities had not heard of the Administrative Instruction providing the opportunity for single parents to send their children to preschool. This has been corrected as Koshi and Gashi in fact claimed that many single parents had not heard of the Administrative Instruction because they believe municipalities have not communicated itse existence well enough.