The state as a political resource - Kosovo 2.0
In-depth | Democracy

The state as a political resource

Seven months of election fever ended two weeks ago when the second round of voting was held to elect the next municipal mayors of Kosovo.

Leading up to each election day — three in total, following two rounds of local elections and June’s early general election — Kosovo’s citizens were hosted in electoral meetings, campaigns and rallies organized by every political party that was seeking their vote.

The tools used should have been selected carefully so that they would be completely in line with Kosovo’s legislation that regulates the ways in which parties have the right to campaign and seek votes from citizens without breaching democratic rule. However, intentionally or not, these documents are often not respected and as a result there are complaints and penalties.

During this election year, all parties breached laws and regulations.

The Election Complaint and Appeals Panel (ECAP) is a permanent independent body comprised by a group of professionals, who have the competences to review complaints related to violations committed by political parties. ECAP also issues penalties to parties that are found to have violated laws during the campaigning and voting periods, in both local and parliamentary elections.

Every citizen aged 18 or over — those who have the right to vote — are entitled to file a complaint to ECAP for potential violations, as are NGOs, political parties and institutions. Through a press release that ECAP issued on September 21 — ahead of local election campaigns that started the following day — they reminded political parties to respect the rules of the democratic election process. 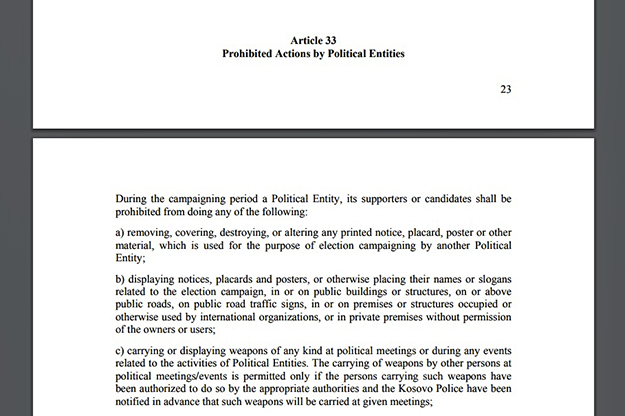 ECAP issued most of its penalties to the biggest parties in the country in both local and parliamentary elections. For example, during the parliamentary elections, the PDK-AAK-NISMA (PAN) coalition was fined a total of 158,000 euros, followed by the second biggest violator, the LDK-AKR-Alternativa coalition, which was fined 71,700 euros, and then Vetevendosje, which was fined 62,600 euros.

Penalties were most commonly issued for utilizing public spaces or state assets.

Article 33 of the Law on General Elections determines which actions political parties can and cannot take during election campaigns, with utilizing public spaces being prohibited to parties. Article 35 further prohibits utilizing public positions, whether elected or appointed, for political gains.

According to NGOs that filed complaints at ECAP, since the beginning of this year’s election process, and during both national and local elections, certain political leaders have utilized their public positions for political gains.

Kadri Veseli and the KSF

Recently, the president of the Kosovo Assembly and head of the Democratic Party of Kosovo (PDK), Kadri Veseli, is said to have misused his authority by utilizing the image of the Kosovo Security Forces (KSF) in a local election ad.

“When big decisions are being taken, and when change must happen, we make it a reality” — this is how Veseli’s narrative begins in his PDK political ad.

“Together we have achieved a lot since we declared independence,” it says as the National Highway is seen in the background. “We are stronger and safer than ever before,” it continues, complemented by images of a KSF woman soldier training at the Civil Protection Regiment of the Kosovo Security Forces.

"We certainly do not support the idea of political parties using KSF images for election campaigns. If this is repeated we will take a stance and take action against it.”

KSF is an apolitical and nonpartisan force that is under democratic civil control, and any presentation of KSF members in the media is determined by certain rules and procedures.

Furthermore, according to Ministry of the Kosovo Security Forces (MKSF) officials, no one can record at KSF barracks without receiving prior approval from the Department for Communication at the Ministry and from KSF Command.

Ibrahim Shala, director at the communications department of MKSF, told K2.0 that Veseli was given a permit to use KSF’s image for an ad that was launched on March 8, International Women’s Day.

“It was approved so as to promote the role of women on March 8,” said Shala. “We do not own the rights for those recordings so cannot account for their use in the political parties’ electoral campaigns.” 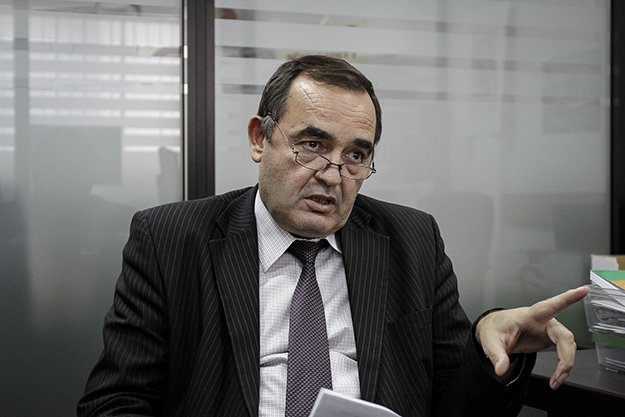 Shala highlighted that had it been stated that the recording would be used for promoting a campaign or a party, it would not have been approved.

“The permit was not given to allow the use of the recording for political campaign purposes. It was not permitted to a leader of a party, but rather to an institution — the Assembly. This is our justification. And we certainly do not support the idea of political parties using KSF images for election campaigns. If this is repeated we will take a stance and take action against it,” Shala said.

On October 16, Balkan Investigative Reporting Network (BIRN), in cooperation with Internews Kosova, filed a complaint to ECAP against PDK and Veseli as its leader. They demanded that PDK be fined for using images of KSF members in Veseli’s political ad.

However, ECAP rejected this complaint as unfounded. They concluded that there was no violation of the Code of Conduct for Political Parties, Their Supporters and Candidates and said that they accepted PDK’s explanation, which among other things stated, “the sequences used in Veseli’s political ad are in accordance with the development program of this political subject.” 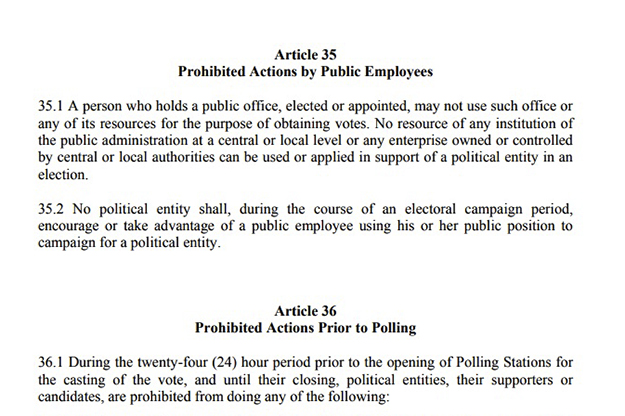 K2.0 contacted ECAP for further explanation and received the response, “We do not comment on ECAP’s decisions, however, you can refer to ECAP’s decision nr. ZLA226/2017,” along with an attachment of the decision referenced.

Commenting on the ECAP assessment to K2.0, Faik Ispahiu, head of Internews Kosova, said that this body had ignored arguments and their complaint’s legal basis.

“We assess that the response issued by the review panel for our complaint completely disregarded our complaint’s legal basis and our argumentation,” he said. “We believe that the panel did not assess the alleged violations, and did not justify this lack of action. A positive decision related to this complaint would have set a good precedent, which would serve to more correctly define the nature of potential violations in which KSF members are included in rallies or election campaigns.”

He further elaborated on the complaint’s judicial basis, saying that Veseli violated election rules by using his position as head of the Kosovo Assembly. 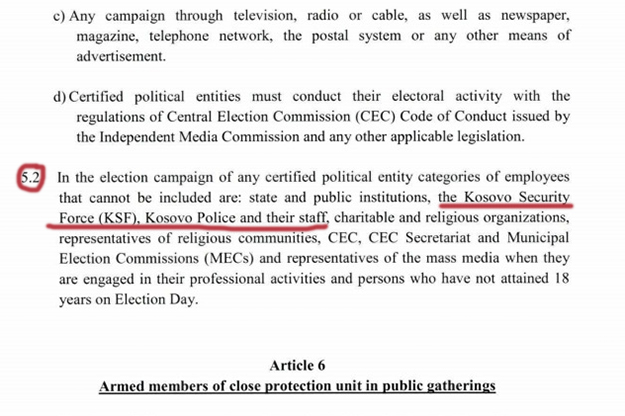 Article 35 of the Law on General Elections states: “A person who holds a public office, elected or appointed, may not use such office or any of its resources for the purpose of obtaining votes. No resource of any institution of the public administration at a central or local level or any enterprise owned or controlled by central or local authorities can be used or applied in support of a political entity in an election.”

Ispahiu mentioned point 5.2 of the Election Regulation on Electoral Campaigns and Notice For Political Events, which states that certain categories cannot be included in political campaigns.

However, ECAP’s decision for the PDK case only specifies that there was no violation of the Code of Conduct, whereas it fails to give a response for the legal basis that BIRN and Internews Kosova used. In fact, when reviewing complaints ECAP is obliged to refer to all legislation that is in power in Kosovo when making decisions about violations, including the Law on General Elections and the Law on Local Elections, as well as the election regulations.

K2.0 requested concrete answers from Veseli’s office about accusations of violations allegedly committed, namely his prohibited use of the aforementioned images. After more than a week, Veseli’s spokesman Valmir Klaiqi failed to respond to the questions.

ECAP did issue some penalties

Complaints to ECAP are mainly made by political parties and NGOs that monitor election campaigns.

For example, Democracy in Action (DIA), which is the only coalition of NGOs that over the years has established a tradition of monitoring the election process, made more than 60 complaints about various breaches relating to different political parties during June’s parliamentary election. They particularly reacted against the inclusion of children in election campaigns, claiming that there were around 3,653 children identified as having appeared in election ads. Another frequent violation that was identified by DIA is the utilization of public resources.

“Political subjects very often used public resources by exploiting civil servants who made use of resources or their position for election campaign purposes,” said Albert Krasniqi, a researcher at Kosova Democratic Institute, one of the members of DIA.

BIRN and Internews Kosova made a total of 112 complaints throughout the local election campaigns, including election day. Complaints were made against all of the biggest political parties in Kosovo, including AAK, AKR, Alternativa, LDK, Vetevendosje, PDK and Lista Srpska. 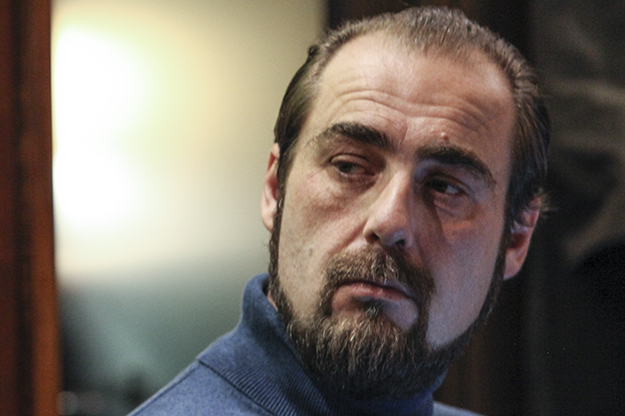 The nature of the violations that were identified by BIRN and Internews Kosova differed, including, but not limited, to: inclusion of children in campaigns, putting up posters in public spaces, inciting hatred, utilizing public enterprises for campaign purposes, distributing or presenting any material in voting centers and violation of election silence.

From the 112 complaints, a total of 44 were accepted as founded, from which the resulting total sum of fines was 100,100 euros.

As part of this, PDK was fined 3,000 euros for inciting hatred against Vetevendosje’s candidate for mayor in the Municipality of Prishtina, Shpend Ahmeti. This complaint was that PDK had put up posters that included an edited picture of Ahmeti, showing a deformed version of his face, in the Arberia neighborhood of Prishtina.

PDK was also fined 2,500 euros in October after it used persons under the age of 18 in its campaign in Ferizaj. Head of Alternativa, Mimoza Kusari Lila, was also fined 3,500 euros by ECAP for including a minor in one of her political ads.

In general, ECAP most often issued penalties to parties that put up posters in public spaces.

During parliamentary elections, the coalition PAN paid the highest amount of fines, whereas during the recent local election runoffs it was Vetevendosje.

For example, Vetevendosje was fined 5,100 euros for using the public space at Zahir Pajaziti Square in Prishtina by putting up a kiosk for registering its voters. LDK filed the complaint against Vetevendosje.

LDK’s branch in Prishtina was fined 2,500 euros by ECAP after Vetevendosje filed a complaint, according to Insajderi. The complaint was filed by a Vetevendosje activist who noticed that informative posters had been put up in some of the capital’s streets, notifying citizens about an election rally — this goes against election rules.

Whereas in the parliamentary election, the coalition PAN paid the highest amount of fines, during the recent local election runoffs it was Vetevendosje with 16,000 euros.

Although some were issued penalties and others weren’t, it is clear that the use — to different degrees — of public assets for political gain remains commonplace, despite the public rhetoric of depoliticizing institutions. K

Feature image: Still from a promotional video of PDK’s campaign for 2017 local elections.