Struggling to survive in lockdown

Single parents in North Macedonia take on a heavy load in the pandemic.

“The COVID-19 crisis — aside from the shock of a new situation — gave me a very hard time because I lost my job,” single mother D.M. from Skopje told K2.0 in an online conversation.

D.M., whose son is a student in Skopje, was fired in the middle of a pandemic. It meant that she lost the only income in the house. “I had to turn to my parents for financial support,” she continued. “So they had to support us with their small pensions. Maybe it was a bit easier since the university was closed so I did not have to pay anything for my son.”

An additional burden on all, but especially families with one income, was the sudden increase in the cost of living in North Macedonia during the pandemic. Before the pandemic, D.M. told K2.0, she needed about 500 euros to cover all her monthly expenses. First cooking oil went up, from around 70 denars (about 1 euro) for a liter, to about 95 – 100 denars (about 1.70 euro). Then, in August last year, the Government announced an increase in electricity prices for households.

The story D.M. told is just one of many about single parents left with no support over the last year. Even those who did not lose their jobs, had to put in additional effort to find a way to keep going to work, while at the same time guarding their children when kindergartens and schools were closed.

“Many parents were focused on staying calm and surviving,” one of the members of the NGO Edna može (One Can), told K2.0.

Since the COVID-19 pandemic began, North Macedonia registered over 140,000 infection cases, and more than 4,400 deaths. Vaccinations began with assistance from the COVAX facility, and the first vaccines arrived at the end of March. At the same time, Serbia and Russia sent additional doses.

According to a recent study by UN Women, during the COVID-19 pandemic, in North Macedonia about 35 percent of women (in comparison to 23 percent of men) have been working from home. This has significantly increased their unpaid domestic work and care for children. Additionally, more women than men experienced increased stress and anxiety, which implies negative consequences for their mental health. 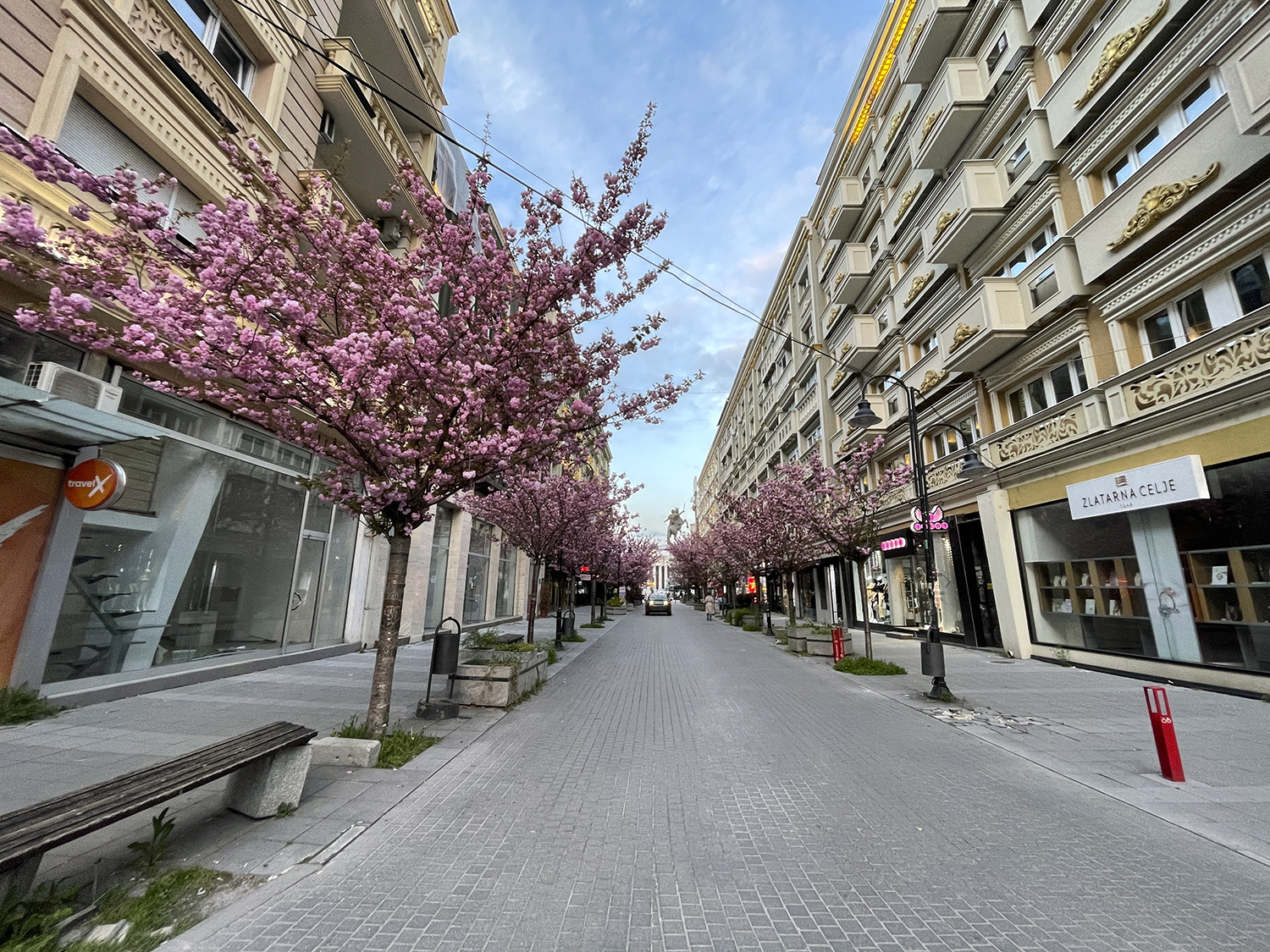 Empty streets in Skopje, North Macedonia capital. According to UN data, about 19 percent of businesses were closed during lockdown. Photo: Kristina Ozimec.

The study also says that the measures introduced in this country, “affected the economy, social sphere, education, culture and every segment in society.” Additional available data show that about 19 percent of businesses closed down over the last year.

“As the health crisis progressed into social, economic and humanitarian crises, everyone was affected, but with differences between women and men, and with the most vulnerable groups hit hardest. Some existing gender inequalities deepened,” it concludes.

The Government responded saying that those who complain about being left with no support did not complete the bureaucratic procedure to receive aid.

The Ministry for Labour and Social Policy could not provide K2.0 with a response about how many single parents are in North Macedonia, or how many of them are in some kind of need. But, in their email, they claim that the Centers for Social Work are keeping records of people who are at social risk, a category that includes single parents, as well. Nevertheless, if a single parent is not in need, the Ministry has no data about the family.

Further, the ministry explained that single parents were a part of the set of Government assistance measures introduced twice last year, and that those in need, had the opportunity to apply for financial help of 100 euros.

The problems that single parents are faced with during the pandemic made it into the media. The Government responded by saying that those who complain about being left with no support did not complete the bureaucratic procedure to receive aid.

Bureaucratic procedures are just some of the problems civil society sees in North Macedonia when it comes to the support given to single parents.

“The assistance provided by the Government was only for certain categories, while many of the single parents were left without any help, and all this made their life more difficult,” One Can claims.

To clarify their claims, they gave examples from their work referring to parents who asked them for help, who were unable to afford even basic vitamins, let alone the necessary medication to fight COVID-19.

The One Can organization did a mini survey in 2020, asking more than 200 single mothers about the immediate challenges they are facing during the pandemic. Poverty, the impossibility of good health care and psychological consequences are just some of the worries women mentioned. 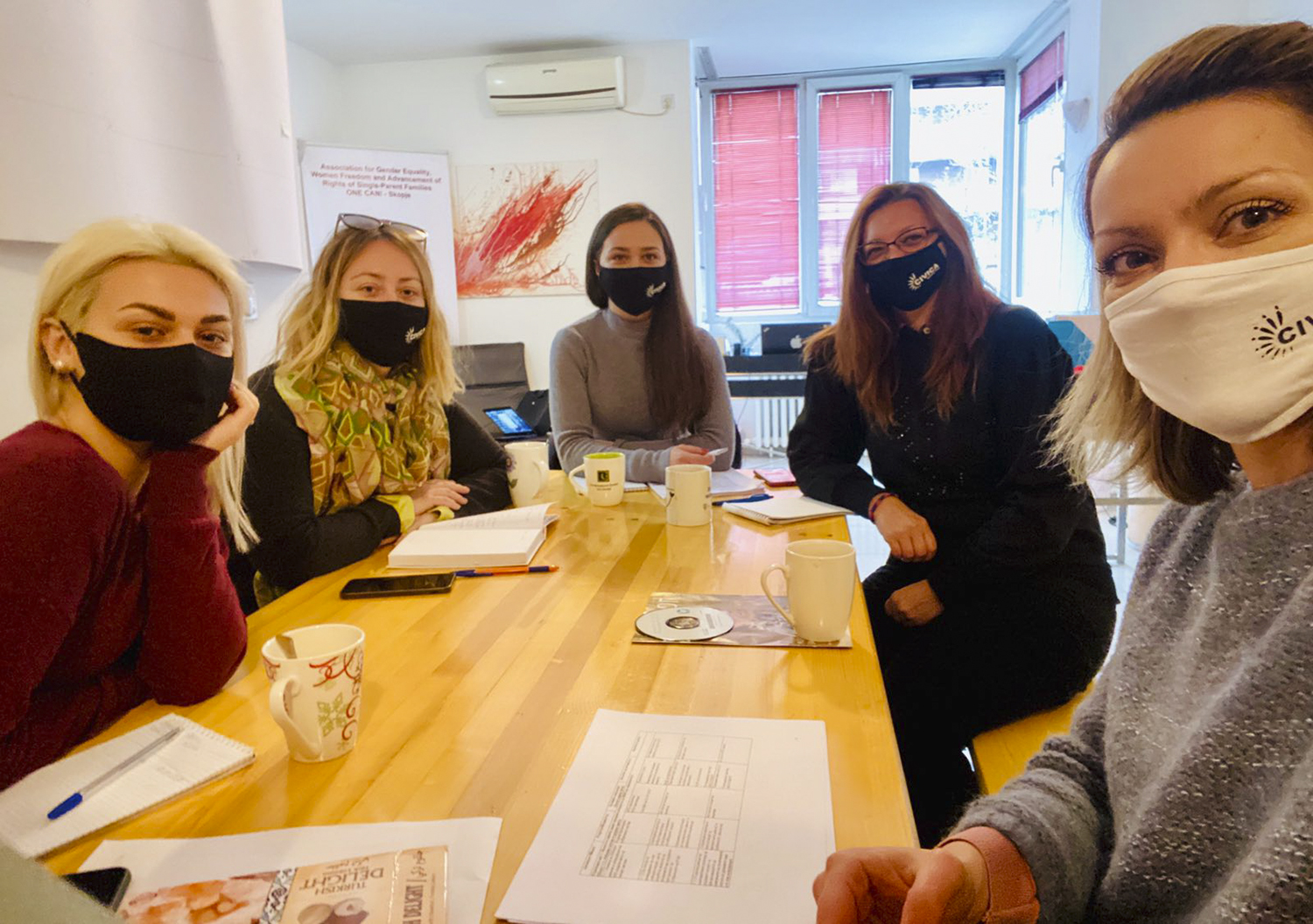 The Edna Može (One Can) team in Skopje and their director Doroti Pačkova conducted a survey to illustrate the difficult situation single parents are faced with during the pandemic. Photo: Courtesy of Doroti Pačkova.

Doroti Pačkova, head of One Can, cites the survey results, saying that over 50% of respondents said they are faced with a monthly income reduction, while over 20% lost all their income because they were part of the informal labor market.

“This data also speaks to the situation of single parents before the pandemic, the situations they live in and the compulsion to work informal jobs, precisely because society does not regulate the opportunity to be part of the normal labor market. It is not a guaranteed right, to freely earn the means necessary for living,“ says Doroti Pačkova.

The UN Women survey confirms this with data showing that, if the lockdown measures continue, one in three women would have difficulty covering basic costs.

Pačkova told K2.0 that she could see in her work daily how many single parents were left on their own during the pandemic.

“It is something like a mission impossible for many to survive,” she claims, stressing the lack of support from society for single-parent families.

The UN Women survey confirms this with data showing that, if lockdown measures continue, one in three women would have difficulty covering the basic costs for food and necessary hygiene products; and that it will be difficult to cover rent and utilities. In general, more women than men who were part of the survey stated that they would have to seek help from relatives and friends.

“No specific measures were created to appropriately meet the very specific needs of single parents. They were treated the same way as the families that raise children with two parents. This is the first step toward the institutional discrimination and injustices that have been done, and are being done, to them,“ concludes Pačkova.K