The pandemic in the shadow of discrimination - Kosovo 2.0
In-depth | COVID-19

The pandemic in the shadow of discrimination

Stojan and Jasmina Ibrić from Badnjevac village, in Serbia’s Žitorađa municipality, were vaccinated against COVID-19 a few weeks ago. They say that they wish to protect themselves against the virus that caused around 10 deaths in the small village of some 850 inhabitants.

Both got their jabs when one of the Serbian government’s mobile teams visited them so that vaccines could reach the most remote parts of the country.

The rest of the respondents in Serbia verbalized distrust toward institutions as the reason for not getting their jab, but they also mentioned inadequate information and fear of possible medical consequences. As many as 80 percent of respondents stated that they have experienced some kind of discrimination while obtaining a vaccine.

Lack of campaign, lack of awareness

In July 2019, the Balkan region’s governments, including Turkey, signed The Poznan Declaration on Roma integration within the EU enlargement process. The document states clearly that the governments are obliged to “increase efforts toward a more comprehensive equality and integration of Roma.” It is emphasized that they have a duty to “ensure larger coverage of healthcare services for the Romani people, at a minimum of 95 percent, or the rate equal to that of the rest of the population.”

In early June this year, the Civil Society Forum was held as part of the Berlin Process, where a recommendation was adopted, to ensure that more must be done with minorities — including the Roma — in order to enhance immunization and the fight against COVID-19.

The region's public institutions have barely done anything to inform the Roma about the importance of protection and vaccination.

Also, a recommendation was passed to collect the exact number of vaccinated Roma in the state-signatories of the Poznan declaration. This has yet to come to fruition, as none of the countries have begun this process.

Generally speaking, efforts to put into practice the requirements from the declaration have so far been modest. This is reflected in the attention paid to the Roma during the pandemic; as well as in the course of the vaccination process, since the region’s public institutions have barely done anything to inform the Roma about the importance of protection and vaccination.

Idriz Ramić from the Roma settlement of Varda, Kakanj municipality in the Central Bosnia Canton, with a population of around 640, says that no one in his close environment talks nor thinks about getting a jab. He says that this is because, in part, there is a certain level of fear among people that primarily stems from a lack of information about vaccination. 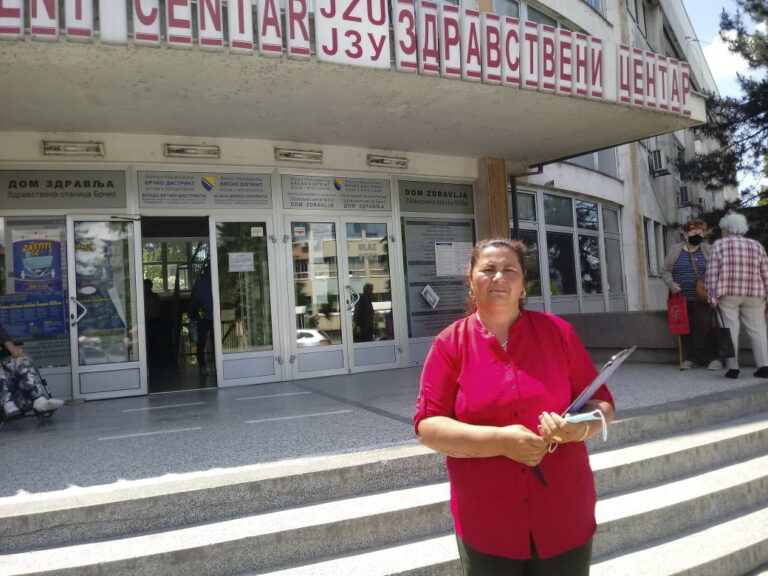 Mejra Šečić, an elected representative in the Brčko district Assembly, Bosnia and Herzegovina, is aware that most Roma in her community do not have enough information about immunization. Photo: Private archive of Mejra Šečić.

The only information that reaches the inhabitants of Varda mainly comes from the youngsters who find it online, including misinformation about the supposed harmfulness of vaccination. This tends to spread quickly.

“Many have heard about the vaccine but nothing more,” Ramić says, remarking that several people in the preceding months from Varda have died from COVID-19.

According to available data, Bosnia and Herzegovina (B&H) is among the top ten countries in the world in terms of COVID-19 mortality rates. However, all the statistics are unreliable in a country that has three levels of government: Two entities, and one district —  that aren’t always prepared to share information with each other.

The country’s authorities are still not doing enough to secure vaccines for everybody. Thus, a large portion of the population is going to Serbia, where vaccines are available to all. Officially, only around 7.7 percent of the population is vaccinated but the precise number is unknown. Simultaneously, B&H is one of the last European states to begin the vaccination process. In the first vaccination phase, which is yet to be completed, medical and pharmaceutical workers, and the elderly have priority.

However, to enter neighboring Serbia, one needs financial means, which many Roma people cannot afford. And the same goes for other citizens of B&H.

Although the total number remains unknown, according to data from 2013, around 50,000 Romani live in B&H. The same study points out that a large number of the Romani have either not been documented or don’t possess personal IDs. This hinders them from enjoying most of their rights, including the right to medical treatment.

Everyone has access to COVID-19 vaccines, with only their name and surname needed to receive one. According to the law, everyone should have access, but the lack of information still remains, about vaccines and the immunization process.

The vaccination campaign in B&H is almost invisible, even on public broadcasters and health institutions. Most information can be found on the vakcine.ba web portal, managed by a local NGO. However, no information is available in the Roma language.

The same language issue applies to other public health institutions.

Vaccinating the chosen ones

The Institute for Public Health of Republika Srpska, one of the two entities, told K2.0 that they are “planning to promote vaccination in Romani communities,” and that they haven’t done so yet due to an insufficient supply of vaccines.

In an email response to our question about the vaccination campaign, the Institute said that workshops were held recently with representatives of the Roma communities from four cities, where they discussed the pandemic and their well-being.

“Recommendations were adopted to implement priority activities in promoting health and preventing health risk factors in the Roma communities in Republika Srpska in 2021,” they claim in our email correspondence, with no details about the recommendations and actions.

Although K2.0 sent identical questions to the Institute for Public Health of the Federation of B&H, as of publication, we have received no response.

As in other parts of B&H, the Brčko district also suffers from a lack of information on vaccination in the Roma language.

The Brčko district also has yet to implement vaccination promotion among the Romani population. However, this is the only administrative unit in B&H with a Roma representative  in its assembly.

In a conversation with K2.0, Mejra Šečić says that she has been vaccinated as an assembly member. The current assembly decided to put themselves and other officials in one of the priority groups, just behind medical workers and the elderly.

Šečić also says that she had “serious conversations” with her compatriots about vaccination and that she is aware that no one has visited Romani settlements and promoted the importance of vaccines yet.

As in other parts of B&H, the Brčko district also suffers from a lack of information on vaccination in the Roma language.

In the Sarajevo Canton, the most populous one in B&H, the biggest problems are caused by a quite complex system of vaccine registration. It requires every person to register through a smartphone app. While registering, one needs to fill in a bunch of data, which is a source of problems, especially for the older population.

The Aksiom Association of Young Romani reacted after the app was launched, warning that the process had an overly complex structure, requiring an internet connection and the use of a smartphone or computer.

In a report published by the Romani web portal Udar, Aksiom welcomed the government’s initiative in the Sarajevo Canton to introduce an electronic registration system but suggest that “attention must be paid to the fact that a large number of the Roma, and other categories, don’t have equal opportunity to access online platforms and services.”

The system is yet to change.

The mysteries of vaccines

According to the available data, until now around 250,000 people in North Macedonia have received their jab, which makes for “a solid number,” in the words of Suad Skenderi, executive director of the Skopje-based Romalitico NGO.

Publicly accessible data doesn’t show the ethnicity of those vaccinated in North Macedonia but Skenderi claims that the process hasn’t been considered to be discriminatory. The vaccination campaign was available on all public broadcasters, although there was no targeted approach to reach out to vulnerable and inaccessible groups.

Although the state did get involved, the main distributors of information on vaccination in North Macedonia remain Romani media and NGOs.

“We are aware that many Roma people have access to a wide spectrum of information, including fake news and conspiracy theories,” Skenderi said. “Many still believe that COVID-19 doesn’t exist or even that vaccines contain microchips that will later be used for controlling people and their lifespan,” Skenderi said, referring to the worldwide issue of misinformation that he recognizes among the Romani population as well.

Although the state did get involved, the main distributors of information on vaccination in North Macedonia remain Romani media and NGOs. This information is usually spread through social media and the internet, in the Roma and Macedonian languages.

In Skenderi’s words, the recent research by the Romalitico organization shows that the Romani are informed about vaccines and that they would get vaccinated if somebody offered them the opportunity.

The AVAJA Movement has also been involved in the promotion and information campaign since the beginning of the pandemic. They have a goal of increasing Romani awareness  and removing “mysteries” surrounding vaccination.

The movement Opre Roma Srbija is doing something similar. In February, they launched a campaign “Healthy Roma, healthy Serbia,” and began to advocate for Roma immunization.

At the very start of the campaign, they met up with the minister of state administration and local self-government, warning that the Roma, in general terms, have worse access to healthcare services and insurance, “both due to a lack of personal documents, the discrimination by medical staff, as well as poverty.” 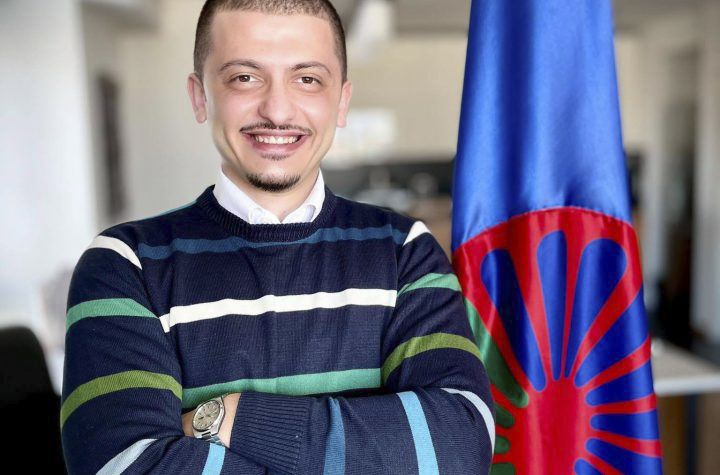 Suad Skenderi, executive director of the NGO Romalitico, Skopje, claims not enough effort is made to inform the Roma in North Macedonia about immunization. Photo: Suad Skenderi private archive.

However, the research conducted by the organization demonstrates how the coronavirus inflicted serious consequences within the Roma population. Research shows that the community — where around 50 percent of members don’t have access to electricity and clean water — was unprepared to combat the pandemic.

Besides, the pandemic and its ensuring restrictive measures create a worse situation for a large number of the Roma, leaving them with zero opportunity to work and secure income. As many as 85 percent of respondents stated that they cannot survive if institutions don’t get involved.

In April of this year, the Bosnia-based Aksiom Association of Young Romani repeatedly emphasized the issues with discrimination, pointing out that institutions have been ignoring the needs of the Roma population for decades, “[officials]  — whose duty it is to help them and contribute to solving problems  — often discriminate against them.”