Orhan Kurtolli’s paintings offer a portal into an ornate world of fantasy and excess. Flavored by a sensibility that is at once surreal, absurd and playfully mischievous, Kurtolli’s paintings provoke an abundance of uncanny sensations and novel associations which draw from the vast wells of the subconscious mind.

The artist’s works contend with a variety of subjects ranging from intimate scenes of childhood memory to portrait studies of actual and invented figures. However, it is his paintings of Prishtina, the city in which he has lived and worked for nearly seven decades, which provide the most robust expressions of his aesthetic skill.

Behind the facade of material forms and infrastructure, Kurtolli’s renderings of Prishtina reveal another layer of the city, constituted by an elusive network of desire, memory and ideology. Here, one encounters the city as something changing and incomplete as it emerges from the vicissitudes of the imagination.

Born in Prishtina in 1952, Kurtolli’s life and artistic career has borne witness to two centuries of tumult and transformation in Kosovo and Southeastern Europe. While he has engaged in a visual arts practice since his time at the University of Prishtina in the early 1970s, Kurtolli has little formal training in the fine arts, having instead undertaken medical studies to secure a job as a dentist.

Ironically, the absence of any formal artistic education has only enhanced the distinctive quality of his work. Unversed in the conventions of the Serbian and Slovenian academies that trained many of his most well known contemporaries, what has catalyzed the development of his idiosyncratic style and thematic focus is precisely Kurtolli’s outsider status.

Kosovo’s capital and largest city, Prishtina, has served not only as the setting for Kurtolli’s life, but also as a repository within which the nation’s broader social and political realities have condensed and cohered. As his paintings suggest, Prishtina exists as a distilled microcosm of Kosovo as a whole. His studies of the city accordingly offer an advantageous means to assess the wider cultural and historical shifts that have accompanied Kosovo in its precarious ascent to nationhood.

Kurtolli describes his own renderings of Prishtina as landscapes composed in equal part by the resources of matter and mind. His paintings denote various relationalities of tension that compose the city, whereby elements of contrast and contradiction provide the ingredients for an array of striking and subtle dramatic episodes to unfold on Prishtina’s urban stage. His urban landscapes likewise devote attention to the city’s most banal and ephemeral elements in a manner equal to that extended towards its most spectacular and enduring features.

What is most immediately apparent about the formal appearance of these cityscapes is their sheer visual complexity. Buildings and people, among other natural and cultural objects, are superimposed upon one another, preventing the viewer from settling on any singular element within the image. 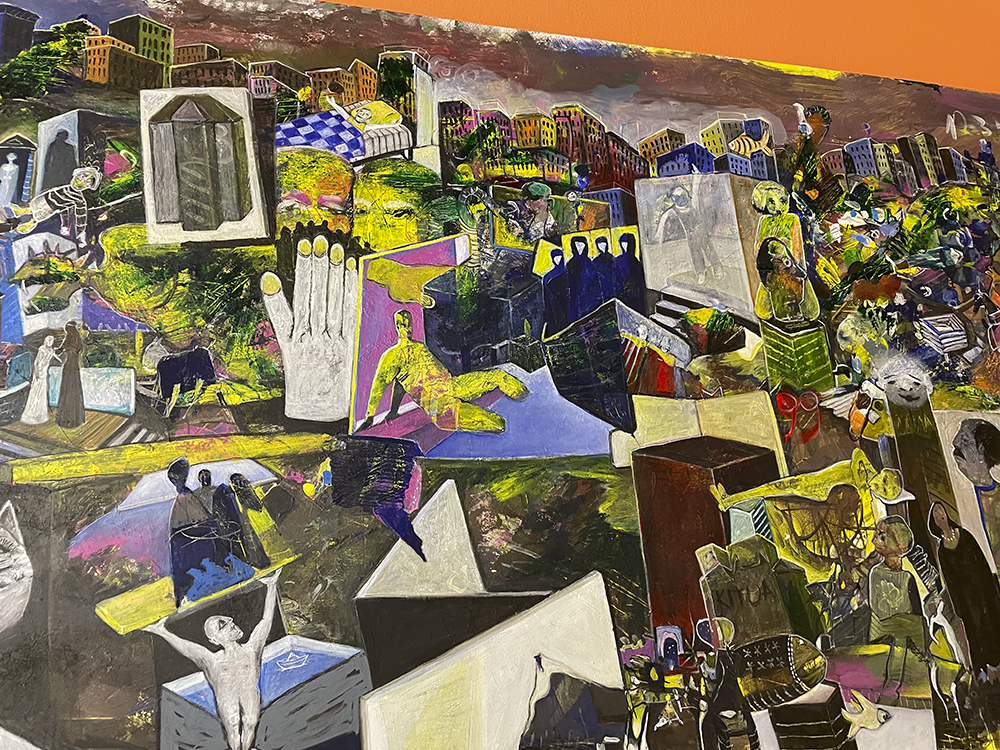 These paintings present a rich portrait of Prishtina in all its hybridity, exhibiting collages where Ottoman minarets, single family houses, high-rise apartments, objects of Albanian cultural heritage, street dogs, trees, faces and other surreal, indecipherable forms all converge in a common context. For Kurtolli, Prishtina is a city torn between the desire to preserve its own memory and historical identity and the competing impulse to progress towards future symbolic and social prospects.

His thoughts radiate with nostalgia for the Prishtina of his youth. “After the last war,” he said “it was difficult to reconcile old ways of being with the new reality of independence. Where there had been ten houses on one side of the street with big and beautiful yards, all were destroyed to build ugly new high rises. For me, this destruction of the city was unreasonable. It erased even the smallest fragments of the communities that were once there.”

In the wake of the Kosovo War, investors eagerly sought to demolish and rebuild decrepit portions of the city that had fallen into disarray as a result of targeted military intervention, forced expulsion and neglectful urban planning under the former Yugoslav municipal administration. The intensity of this desire, compounded by a climate of political and economic clientelism, enabled such investors to easily bypass already insufficient architectural codes intended to maintain zoning boundaries and preserve sites of heritage.

Opposition to the construction of these illegal postwar developments was harshly rebuked by powerful stakeholders. Most tragically, such resistance resulted in the mafia-style muder of the prominent urban architect and then municipal director of urban planning Rexhep Luci.

Kurtolli’s paintings attest to the loss of communal integrity and historical consciousness at the hands of these profiteering urban interventions. This critique is made directly evident in his work through the common appearance of bright, multistory apartments looming insidiously over traditional Albanian homes, impatiently waiting to claim the valuable land on which they are built. 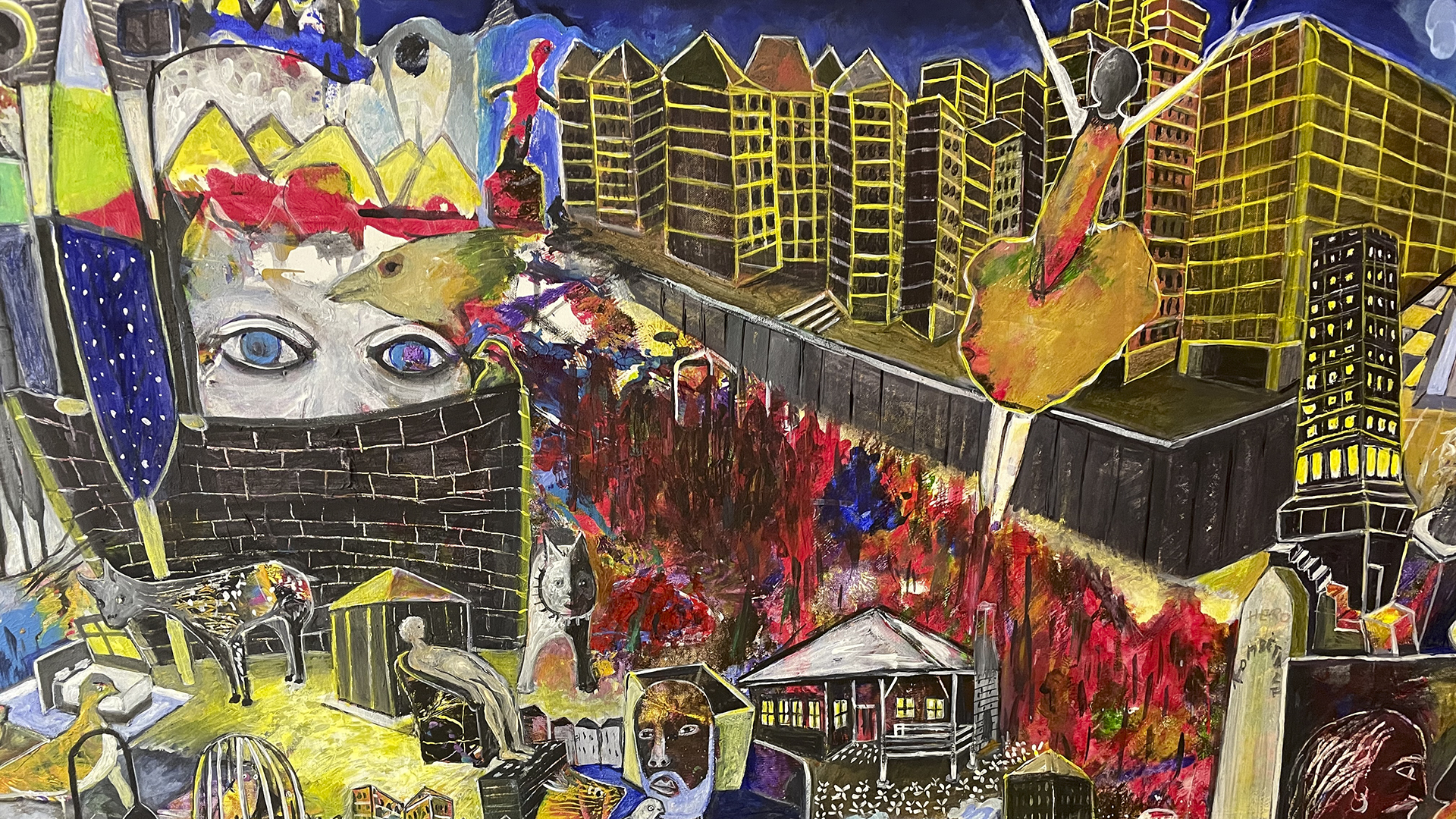 His renderings of Prishtina express a preoccupation with a mode of dwelling that is not merely physical, but also existential in character. In many of his images of the city, we find the artist himself painted into the scene, stoically observing the setting in which he is implicated.

Interestingly, Kurtolli’s presence here is only peripheral, situated at the edges, a footnote in comparison to other more focalized elements. While he is Prishtina’s imaginative co-creator, his minor position within the context of the wider urban landscape signals that he lacks authority over his creation.

The city appears to unfold from itself, without the ultimate control of the artist who presides over his work. Torn between the competing urges of individual and collective will, it remains resolutely unfinished.

Kurtolli’s images suggest that Prishtina does not arise from any singular source. Rather, its existence is made manifest as a kind of Theseus ship whose underlying spirit endures despite the continual replacement of its individual parts. Kurtolli thus resists the notion that Prishtina’s true identity can be traced to any particular source, instead pointing to its emergence through a complex, ever-changing nexus of memories, yearnings and speculative reflections.

Scattered among the rolling hillsides that surround Prishtina, one finds the terracotta frames of half-built homes frozen between completion and ruination. Often constructed by families in anticipation of future kin or utilized to reserve land by those living in diaspora, these structures poignantly reveal that the city is changing and will soon come to be inhabited in new ways.

While time will inevitably alter Prishtina’s urban landscape, Kurtolli remains hopeful that younger generations of Kosovars will strike an adequate balance between implementing necessary measures of urban development while preserving the most salient elements of the city’s material and intangible heritage. “Young people have a special opportunity to shape how the city and the country are being made,” he tells me.

“These are people who have grown up in the postwar context with a unique understanding of the profound loss and subsequent sense of possibility that emerges when life has been disrupted by severe conflict.” As Prishtina ventures towards the horizon of its imminent future, Kurtolli’s visual meditations extend a reminder that the imagination will serve as a crucial constitutive element in the ongoing transformation of both the city and the society in which it is embedded.

The images of Orhan Kurtolli’s artwork displayed in this piece were recently showcased at the exhibition “Moshe: A story in continuation”, a curatorial project organized by Albert Heta which drew from selected works by Orhan Kurtolli, as well as the artist’s personal archive. This exhibition was produced by the Stacion – Center for Contemporary Art Prishtina and held at the institution’s Klubi i Boksit exhibition venue. More information regarding the exhibition can be found here. The author wishes to thank Stacion’s Artistic Director, Albert Heta, for his efforts in developing and curating this exhibition as well as Program Assistant Laureta Hajrullahu for organizing ongoing correspondence with the artist.