Family members remember their children killed during the Kosovo war.

Fatime Muli, a woman with an unbreakable will to see Kosovo independent, tells of the resistance and the struggles of her family during the war years.

On March 6, 1998, together with thousands of other women with loaves of bread in their hands, she headed from Vushtrri toward Drenica to join thousands of women protesters from other cities. This march was a message for the international community and humanitarian organizations that women and children from Drenica were in danger, both from hunger and from Serbian forces. It was stopped by the Serbian police.

During that time, Fatime’s house — which was opposite Vushtrri’s “Ferki Aliu” stadium — was open to host Albanians displaced from the zones where the first massacres of the war were happening.

A year later, she was still hosting women and men in her home, where she lived with her husband, parents-in-law, a young daughter, two sons and her oldest son’s wife. She had another son that they had sent to Germany so that in case of an attack at least one of the children would be safe.

Like many others, she gave food, clothes and blankets to the refugees for two-three nights, before they continued their journey elsewhere, toward a safer place.

Houses at that time were put at the service of survival. There were openings in the wall of Fatime’s house that would allow people to pass from one house to the next, something repeated to the far corner of the city.

The iron gate to her backyard led onto Faruk Beqiri street, where Serbian forces moved continuously with military vehicles and which was situated only a turn away from the roundabout on Vushtrri’s main street. The Serbian forces would demand entry to the Muli family’s house, sometimes multiple times each day, because they would hear noises and loud voices from the people who were sheltered inside.

April 18, 1999 would begin as a usual day for Fatime and her family, as far as a day can be called usual in times of war.

When it got late at night, Fatime would turn off the cooker and finish the cooking, but since the Serbian forces continued knocking on the iron door, she didn’t feel safe to let her children or her son’s wife sleep there. They slept at their uncle’s house, which was across the iron bridge, around 150 meters away from their house.

“Serbians were knocking on the street non-stop,” she recalls. “We had to open the door, because they would put a gun to our throats, sometimes mine, sometimes my husband’s.”

This was how it was on April 18, 1999. It would begin as a usual day for Fatime and her family, as far as a day can be called usual in times of war.

Burim, her son whose 13th birthday was coming up in 40 days, was seven years younger than her oldest son Selim, and six years older than his little sister, Qëndresa. He would often recite and read at home, and among the things that he stored in the backyard and had prepared to take with him in case they were expelled and the house was burned down was his ABC book and notebooks.

Fatime took care of all the children, but especially Burim, since he was heavily built and didn’t look like a child, even though he was only 12 years old. Since he was tall and stout, she was scared that the Serbian forces would mistake him for an adult, just like they had with many others. Therefore, when Burimi wanted to get out of the house, she wouldn’t let him. 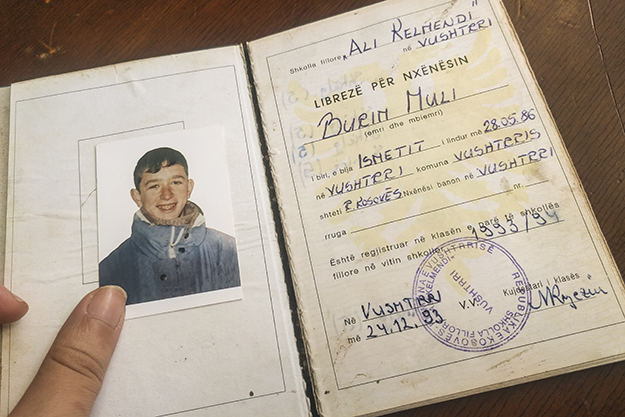 On April 18, when Burim wanted to accompany a refugee to the doctor, Fatime told him not to go — but he went anyway.

While he waited for the refugee girl outside the doctor’s house, three policemen in a car passed by at the crossroads and shot at him with a sniper from far away. Burim hid somewhere nearby and they seemed to leave.

After he had waited for a bit, he went to get on his bike. But, they hadn’t really left. In a whir, they came back and shot at him again — this time they didn’t miss.

“When my boy went onto the street to come back here, they turned the car around and shot him with a sniper from the car window. They shot him with one bullet,” Fatime says. “They killed him there on the bike. Some say he walked 10 steps.”

Fatime says she knows the people who killed her son.

“They had uniforms, they were paramilitary; the others were also dressed the same, you know, the ones they call “auxiliary police?” Fatime says. “They were all from around here, those who killed my son, I know all their names.”

Afterwards, some passersby picked up Burim’s body with difficulty to send him home.

“He had a hole here, it was open behind because I checked it — as any mother would,” she says. “I still have the clothes that he had on that day. I’ve repaired the bullet punctures.”

She turns back 20 years in time and painfully recalls how they buried Burim that same day — on April 18, exactly an hour after he was killed, at half past four in the afternoon — so as to have a place to mourn him as soon as possible but also in a way for “his soul to find peace.”

Around 10 days before Fatime Muli would take the road toward Drenica with bread in her hand, the most well known massacres in Kosovo had already happened — the Prekaz massacre.

On March 5, 6 and 7, Serbian forces had surrounded the village of Prekaz. They attacked from all sides, and especially in the direction of Jashari family, known for their involvement in the Kosovo Liberation Army (KLA) since its establishment.

On March 5, 1998, three Jashari brothers — Avdullah, Bujar and Blerim — together with their parents were staying at their uncle’s house; they were all cousins of Adem Jashari, the KLA commander who was the main target of Serbian forces during the offensives.

Only two pairs of pants, a shirt and some photos to remember them by would survive.

Sixteen-year-old Avdullah, the middle child in the house, was very physically mature for his age. He would often accompany his father as he guarded his uncle’s house. He was an excellent pupil with good grades and passionate about computers and technology.

Just like his brother, 11-year-old Bujar was also an excellent pupil. He really liked playing football, and every time he wasn’t at home, everybody knew where he was: at a small football field, not far away.

While Avdullah, Bujar and Blerim were accommodated at their relatives’ house, men were positioned all over the house to fight against the attacking Serbian forces. One of them was the three boys’ older brother, 19-year-old Valdet.

He was the only one of the four brothers who would manage to survive. While confronting the Serbian forces he was injured by a grenade, but he managed to hide and to stay alive.

At their uncle’s house 11 people were killed, including their mother. The house was burned down to the ground.

Only two pairs of pants belonging to Bujar and Blerim, a shirt in which Avdullah would be buried and some photos to remember them by would survive. 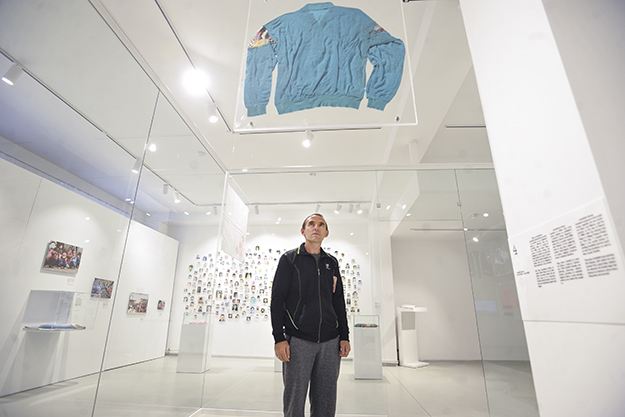 Valdet Jashari’s three younger brothers were killed during the Prekaz massacre of March 1998. The shirt in which his brother Avdullah was killed is today on display in the “Once Upon a Time and Never Again” exhibition, organized by the Humanitarian Law Center Kosovo and dedicated to the children killed in the Kosovo war. Photo: Atdhe Mulla / K2.0.

Looking back on that day, Valdet tells how his two middle brothers, his mother and others were killed from the grenade explosion, and that only his father survived. His youngest brother, Blerim, only 5 years old and “the sugar” — the youngest in the family — escaped the grenade, but he couldn’t survive something else.

“The youngest brother… when we [exhumed] the bodies, when the [doctor] saw the skull, he said: ‘Look Valdet, he was killed from close range — he was killed with a handgun,’ Valdet recalls.

The Bala family in Peja was also beset by tragedy during the war.

During the 78 days of NATO bombing in the spring of 1999, war crimes — including massacres, rapes and expulsions — by Serbian forces intensified. Some of the biggest crimes of the war took place during the last phase of bombing, right up until the final moments when all of the Serbian forces left Kosovo to the north.

On June 12, four days before NATO land forces entered Peja, the families of Isa and Musa Bala gathered at Isa and his wife Halise’s house in Peja, having been unable to cross the border into Albania a few days earlier.

Everything would happen in half an hour.

There was no electricity at home. As it began to get late, three of Isa’s sons — Hajri, aged 12, Veton, aged 8, and Agon, aged 6 — were on the second floor either sleeping or getting ready to sleep. Meanwhile, 11-year-old Dardane stayed awake with the grown-ups.

Musa and his wife Vjollca were also in the house, along with their three children, 6-year-old Rina, 5-year-old Nita, and 4-year-old Ron, and Isa and Musa’s old paralyzed mother, Mahija.

At 21:30 there was knocking at the door from people wearing camouflage uniforms, who then attempted to open it. Everything would happen in half an hour.

Isa had to open the door and a group of Serbian paramilitaries came inside, armed with automatic weapons, knives and grenades. They gathered everybody on the second floor to see if Musa and Isa were home.

When they saw that they were, they demanded money from them. Isa gave them money and handed over the jewelry belonging to the women of the house. After taking it from them, the paramilitary group took both of the Bala brothers to a nearby house, where an armed man was staying.

Only Isa would come back. 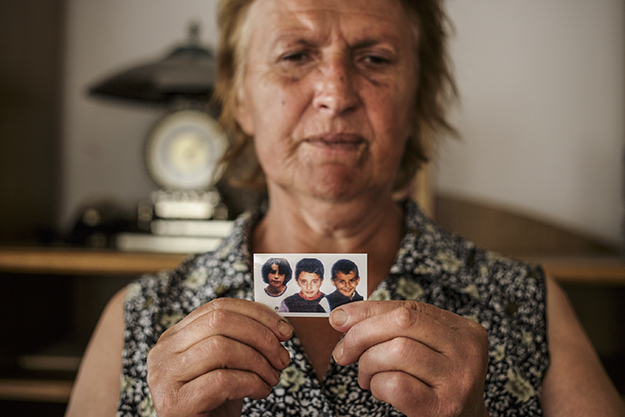 Halise Bala’s children Dardane, Hajri and Agon were killed in one of the final massacres of the Kosovo war. Halise, her husband Isa and their son Veton managed to survive. Photo: Ferdi Limani / K2.0.

Shortly after, the paramilitaries began spraying bullets into the room where the members of both families remained. As they left, they threw two grenades at the stairs of the house in order to burn it down.

That night, during the massacre of the Bala family, five children and two adults — Vjollca and Musa Bala — were killed.

“Look, I myself received eight bullets, but I don’t care, if they hadn’t done anything to the kids,” says Halise, who survived the massacre. “But they killed our children… they killed them.”

When the Serbian paramilitary were shooting, Veton hid behind his mother and when they stopped to change the guns’ magazines he managed to crawl to the balcony. 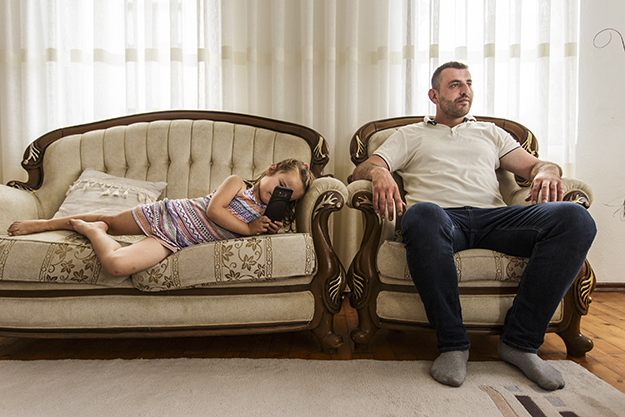 Veton Bala and his daughter Dardane, who was named after her aunt who was killed during the Bala family massacre in Peja in June 1999. Photo:  Ferdi Limani / K2.0.

He then jumped from the second floor and fled to some neighbors who lived close by; this is where his father, Isa, would later find him.

The only other child to survive the massacre was Musa and Vjollca’s young son, Ron. Veton explains how Mahija, Ron’s grandmother, had hidden Ron at her paralyzed legs and had protected him.

“His grandmother was alive, paralyzed. She took Ron, who was 4 years old, and hid him at her legs — she protected him. She was completely paralyzed,” he says. “They said to her: ‘You’ll stay alive, to see all of them dead…’ and then they shot with Kalashnikov bullets [past her head]. The bullets are still in the room.”