Counting the costs, one week after 6.4 magnitude quake.

“It was like we had woken in another world, where everything had turned to dust. We couldn’t see it, but we could feel it, we were breathing it… all that dust. We tried to crawl out, me and my wife, through the rubble of our room. It was pitch dark and the air was unbreathable. We could hear the cries of the animals outside as we tried to flee our way out by using our hands; when we touched something we changed direction, always searching for empty space. I don’t know how we made it out to the first floor.”

Besim Bardhi, a farmer in his 60s from Bubq, a rural locality in central Albania, points at the now-open-air second floor of his wrecked house where he had been sleeping as he recounts his ordeal. A chandelier hangs intact from the ceiling, a reminder that stands vigil to the rubble that lays below, made up of concrete blocks, smashed doors and furniture.

Bardhi and his family are among the many thousands who have been affected by the devastating 6.4 magnitude earthquake that rocked Albania in the early hours of November 26, when most were asleep. The central part of the country and its corresponding coastal areas took most of the brunt, with 51 dead, more than 300 injured, some in a serious condition, and several thousand properties damaged, destroyed or inhabitable. 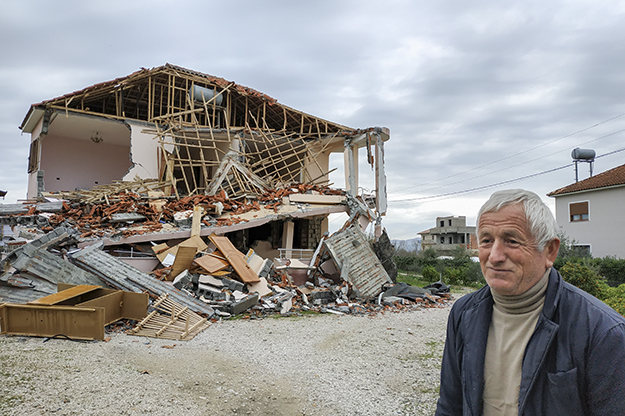 Besim Bardhi and his wife were sleeping on the second floor of their house in the village of Bubq when the earthquake struck. Photo: Ervin Qafmolla / K2.0.

The farmer and his wife, both physically unscathed from the event, are now sleeping in a tent, delivered by rescue teams, which has been placed in a nearby field. “We are happy we made it out with our lives,” he says, smiling.

The house where he used to live was the fruit of a lifetime’s work, he says, built partly with contributions from his son and daughter, who live and work in Italy.

Some of the other buildings in the vicinity look intact. When asked if he built his big house by himself or whether he employed an architect or engineer, Bardhi shakes his head in disapproval.

“This was built in the ’90s,” he says. “There were no such things back then, no requirements, no controls from authorities — there were no authorities!”

Bardhi remembers recycling old bricks from an abandoned state-owned building when he laid the first floor.

Albania experienced tight state control of its economy, political and social life for about 40 years after World War II, when Enver Hoxha and his regime took power and held it with an iron grip, accounting for what most commentators assess as the harshest communist dictatorship in the Balkans.

With the collapse of the communist regime in 1991, institutions and effective rule of law experienced a precipitous downfall, along with the overall presence of the state. A chaotic, free-for-all market economy was established amidst the ruins of the old system.

Bardhi remembers recycling old bricks from an abandoned state-owned building and sand from the nearby river when he laid the first floor. The second floor was built in the years that followed. Now, it’s all but a pile of rubble and dust.

As the rescue effort to assist families and provide temporary shelter in Albania continues, an evaluation process of the damages is also underway.

Most media attention has focused on the coastal city of Durrës and the nearby town of Thumanë, which suffered most of the fatalities, but destruction is visible throughout the rural communities in most of central Albania, including the capital Tirana.

There are no recorded victims in Bubq or in the nearby villages. However, just driving through the area, dozens and dozens of damaged, uninhabited houses appear along the half-deserted roads.

"Taking out the animals from the wreckage, it felt strange, like it was human bodies down there."

Another farmer, Mark Doda, looks at his remaining two chickens that managed to survive along with their small cow. His house has also been destroyed, but he doesn’t even mention it.

“You know, taking out the animals from the wreckage, it felt strange, like it was human bodies down there, not animals,” he says.

His elderly father leans on a stick, nodding, with a somber face.

Facing their old, destroyed village house stands a new, not yet completed two-floor building. The family constructed both by themselves. “But we have put more material in the new one, so there are only a few signs of damage,” Doda explains. 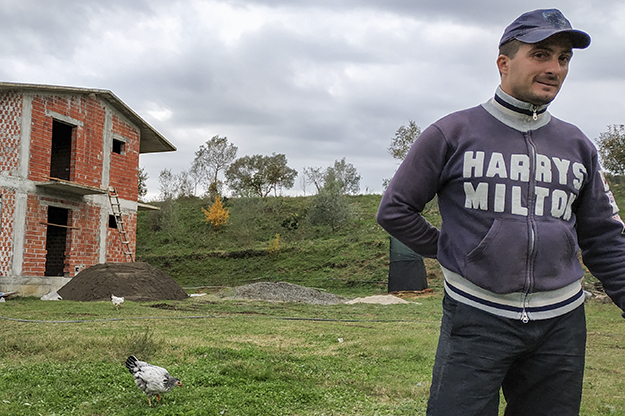 Farmer Mark Doda’s self-built house was destroyed in the earthquake, although a second house that they are in the process of building has only suffered minor damage. Photo: Ervin Qafmolla / K2.0.

None of the interviewed farmers, in several villages throughout central Albania, recall having ever received any safety checks or visits from authorities regarding the structural integrity of their constructions in the past.

Elian Stefa, a Tirana-based architect, who has visited a number of the damaged property, says that the materials used for buildings in rural areas, especially in the early years of Albania’s transition after the end of the communist regime, are not meant to be used for permanent residential buildings.

“It is unfortunate, but these buildings that would look sturdy in normal conditions, would ultimately crumble in environmental crises,” he notes. “Do-it-yourself techniques of this new vernacular architecture can be used to solve temporary needs, but not as long-term solutions.”

Destruction has also occurred in developed urban areas. In the city of Durrës, several residential buildings, including some with 10 or more floors, are marked to be demolished because of severe structural damage.

Apart from inadequate construction standards, human intervention may also be to blame.

In one instance, after the first floor of a multi-story building collapsed resulting in the death of two people, the owner of a bar on the ground floor is being investigated by authorities under suspicion that he damaged four of the main pillars to improve the available space of his business.

Several other investigations are ongoing, according to authorities, but no arrests have been reported so far.

Recently updated government figures show that overall there are more than 1,100 destroyed houses throughout Albania and about 5,500 that are heavily damaged. Also, there are around 560 heavily damaged residential buildings, as well as 28 damaged schools. 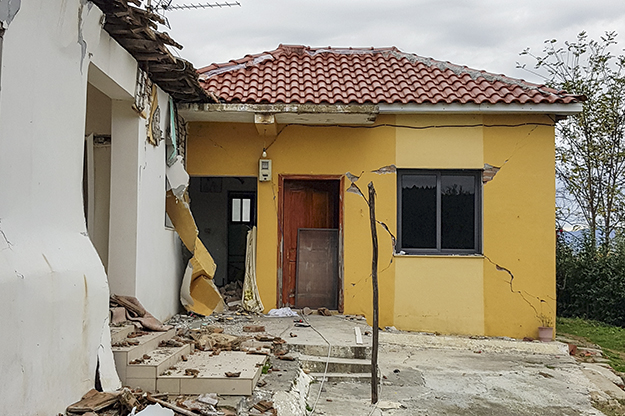 Thousands of buildings have been heavily damaged or completely destroyed in the earthquake, leading to more than 3,000 people officially being evacuated. Photo: Ervin Qafmolla / K2.0.

The Prime Minister Edi Rama has said there have been several million euros in donations from different sources following appeals from the government and other organizations to provide for much needed relief.

In a separate statement, the Governor of the Bank of Albania, said that the International Monetary Fund has offered 87 million euros as a relief fund for Albania, following the devastating earthquake.

But with the evaluation under way, the real aftermath of the earthquake, including financial damages and necessary reconstruction funding are yet to be fully explored.

Experts that have participated in the meetings of the National Reconstruction Committee, an ad-hoc body spearheaded by PM Rama, have warned that the final bill may amount to several hundred million euros. 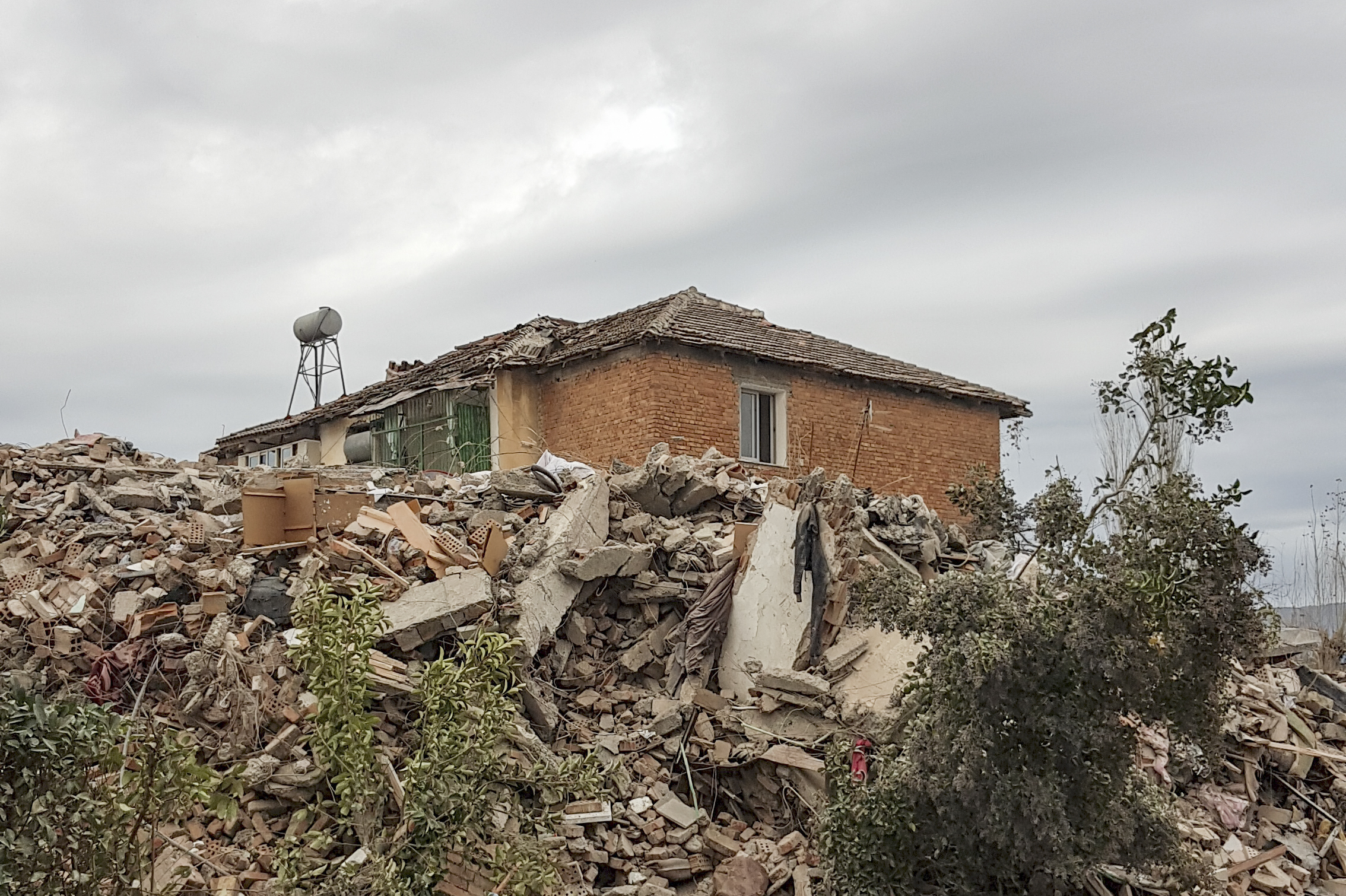 Millions of euros have been donated from various sources since last week’s earthquake, while the IMF has offered an 87 million euro relief fund. Photo: Ervin Qafmolla / K2.0.

In the same meetings, Rama has also voiced strong warnings toward developers and construction firms, urging them to address shortcomings or face consequences.

“Those who built [these buildings] better repair them or go to prison,” Rama said. “It is not up to us to repair those residential buildings that have sustained recoverable damages due to mistakes in implementation [of construction].”

In the meantime, over 3,200 people have been evacuated and accommodated in hotels and temporary shelters, including several hundred that have found shelter in neighboring Kosovo, as authorities and organizations seek to contain the post-earthquake chaos, and address the basic needs of those who have lost everything. K