A founder of Bihać’s KRAK writes about the practice of total engagement.

In April 2015, the then-mayor of Bihać decided to kick the city gallery out from their attractive premises located in the city center. Cultural workers and residents gathered around the #NeDamoGaleriju movement (“We won’t give up the Gallery”) but could hardly have imagined what sort of change would come next. Through a spontaneous, but audacious coordinated action, the gallery was saved in record time — just a couple of days. Thus, it has gone down in history as a feat of civil resistance notable not only for Bihać, a city in northwestern Bosnia, but also beyond.

The way citizens of Bihać organized, coordinated, and engaged themselves proved to be a paradigm beyond the dominant political protocols; there developed a space of solidarity and companionship garnered by its main protagonists.

They received support from the students of the Textiles Departments at the University of Bihać, whose curriculum covers the contemporary phenomena of artivism and socially engaged art practices. This gave swift rise to a catalogue of design visuals aimed at informing and engaging citizens on social media.

At the end of the day, the following questions were raised: is higher education permeated by a sense of social responsibility, is the process of learning political, and, if so, to what extent?

The sequence of events set in motion back in 2015 then continued in 2017 with the launch of a university course titled “Design and Crisis,” for which the Textiles Department was awarded Patterns Lectures, a funding award Erste Stiftung and WUS Austria grant to new humanities and art courses. The new course’s syllabus put an emphasis on examining the history of design from the time of late Yugoslav socialism until today — with a particular focus on Bihać, the Bihać region, and the wider area. Drawing on critical analysis, “Design and Crisis” showed that the current social circumstances are a result of moments of discontinuity, starting with the breakup of socalist Yugoslavia and pressing on with wars, genocide, and everything else that followed as part of post-war normalization efforts.

In March 2017, “Design and Crisis” reached its climax with the symposium titled Industrial Heritage in the Bihać Area Between Reality and Vision, the aim of which was to tackle a series of complex issues pertaining to urban planning, public space aesthetics and policies, architectural design and broader ecological and social aspects.

These aspirations culminated in 2019, when the Kombiteks Workers’ Club was taken over. KRAK, the Center for Contemporary Culture, was created.

Held in the run-down and abandoned premises once belonging to the Kombiteks Textile Combine Workers’ Club, the event included an exhibition, Artifacts of a Future Past, which featured documents, artworks and relics of social engagement.

The symposium ultimately opened up a discussion on abandoned industrial sites while articulating a visual projection towards the creation or recreation of new space values. This paved the way for a deliberation on social engagement, its practices and cultural activism within local communities.

These aspirations and inclinations culminated in 2019, when the Kombiteks Workers’ Club was administratively taken over by the Bihać-based Revizor Foundation. As a result, KRAK, the Center for Contemporary Culture was created.

What loomed on the horizon while the exhibition was being organized in 2017 became an integral part of the experience three years later. For this reason, KRAK is best understood as a result of sustained engagement in the fields of critical theory, art, design and civil responsibility.

In spite of the pandemic

KRAK’s independent and autonomous space is a product of continued scientific observations and their implementation in practice. Its conceptual framework emerges from post-socialist and post-industrial features as well as a failed and very much painful transition from the Yugoslav self-governing socialism to the post-Yugoslav neoliberal capitalism. Some of the more notable characteristics of the period in question are conflictual relations, depopulation, poverty and trauma. 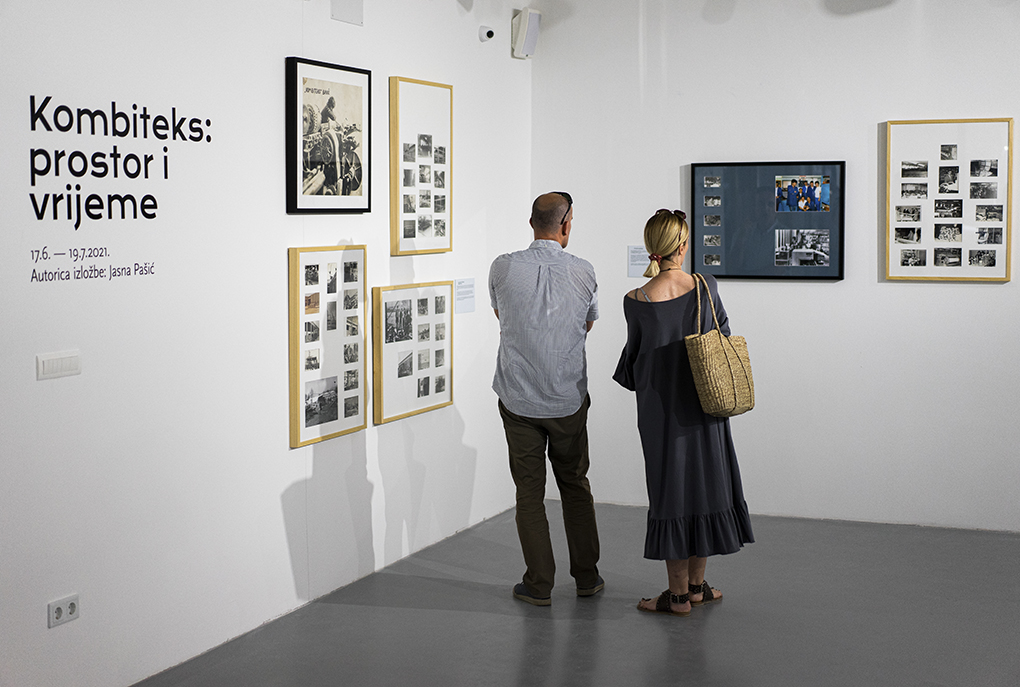 Even though the initial organizers got together in autumn 2020, the program activities were launched only in spring 2021 due to the spread of COVID-19. Their first project confronted the local industrial past of the Kombiteks Textile Combine, which is from the time of Yugoslav socialist self-management.

Historian Jasna Pašić put on a large documentary exhibition of photographs and film stock that KRAK inherited during Kombiteks’ bankruptcy process. The photographic footage was conserved and saved from further deterioration, and 8mm film strips were reshaped into an art video by Haris Sahačić.

The comprehensive publication that accompanied the exhibition served as a testimony to a time long passed, from which KRAK draws inspiration.

After months of efforts, KRAK’s second exhibition came as the Hatinac neighbourhood of Bihać, where KRAK is located, had been brought to the attention of experts in spatial planning, architecture, design and art.

KRAK’s members hold on to the belief that the political power of a self-managing workforce can be compensated through local community action.

This exhibition, Hatinac. Iza struktura, was made possible due to the interdisciplinary cooperation of Architecture, Engineering and Textile faculties in Sarajevo, Banja Luka and Bihać, along with the contributions of individual artists, designers and architects. The exhibition itself represents KRAK’s twofold conceptual and ideological basis: on the one hand, it is based on Kombiteks’ past and heritage; on the other, it is based on the collectivity of the local community.

KRAK’s members hold on to the belief that the political power of a self-managing workforce can be compensated through local community action. Neighborhood as in good neighborliness constitutes a new political force at a time when a self-governing system has been replaced by capitalism and the pattern of catering to the private. 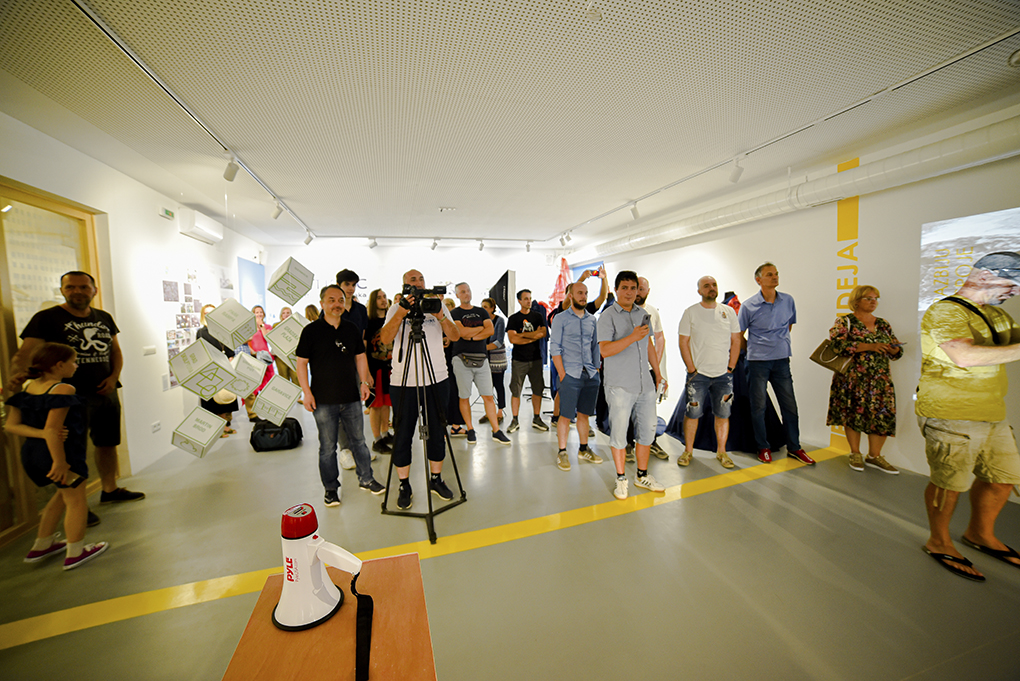 In a broader sense, KRAK focuses on contemporary culture — including visual arts, design, and social theory — as a template for proactive practice. It is envisaged as a participatory project with different actors who make use of social engagement and urban transformation in order to bring about the creation of new patterns of learning, informal education, and cultural exchange.

Even the current exhibition by Aida Šehović, Returning Home, establishes intercultural contact with those people on the move (migrants, refugees, and stateless persons) who — owing to the EU’s rigid policies and border closures — have ended up stuck in Bihać and the surrounding area. Apart from recounting the artist’s personal experience of being a refugee, the exhibition is an opportunity for KRAK to further present itself as a space for socialization and emancipation.

The involvement of various professionals and amateurs (including artists, designers, architects, educators, lawyers, activists, gardeners and beekeepers) as well as state institutions eager to profile engaged and socially responsible practices are the crucial aspects for potential activities that would be geared towards shaping a new social reality. KRAK wants to try its hand at being a testing ground for a new sociality.