We survived, but a part of us died in Srebrenica - Kosovo 2.0
Blogbox | War Crimes

The Srebrenica genocide as seen through the eyes of a child.

During the war from 1992 to 1995, we — my mother, my little brother and I — lived apart from my father for three years. My father was not able to return to Bosnia from Belgrade, Serbia, where he had been working at the beginning of the war.

Soon he had to flee Serbia with no chance of returning to Bosnia. He left Serbia and somehow was able to travel to Austria, where he tried to get in contact with us. That was very difficult.

During the entire war there was a lot of censorship and letters were confiscated by the Red Cross. You were not allowed to write about death or the war. Sometimes months would pass before we were able to contact my father. He never knew if we were alive or dead.

This whole time, my grandfather became something like a second father to my brother and me.

My grandfather became our protector, even though he was a man in his sixties. I still remember the day we saw him for the last time.

Grandfather was a very strong and proud man. He loved us dearly. He was mostly an introvert, who loved to take care of his animals and did not like to talk to people. He was a person who only talked if he had something important to say.

I followed him around like a little puppy. He took me with him when he chopped wood or when he took our cow to graze. I was, and still am, very proud of my grandfather.

My grandfather became our protector, even though he was a man in his 60s. I still remember the day we saw him for the last time.

On July 10, 1995 we were all ordered to go to Potočari, the UN military base at that moment, because Srebrenica had fallen into the hands of Ratko Mladić and his army.

My mother dressed us nicely for the last time.

We were one of the last families to arrive. My aunts were there with their kids. I remember grandfather had his best clothes on. He never left the house in dirty clothes. He had on his black beret, white shirt, black blazer and black trousers.

Arriving in Potočari we soon realized that something was wrong.

As soon as the Serb troops arrived shrieks of terror were heard. People were screaming that Serbs had beheaded someone near a well. I grabbed my mother’s hand as hard as I could. Soon I would see those “Četniks.”

I imagined them as hideous monsters. With horns who killed and tortured people.

Then they stood in front of us.

I remember one of them clearly. He was tall and bald. He had a beard. On his left arm there was a giant tattooed cross.

My heart stopped. These horrific monsters were human. I said to my mother “They are human, they are human. Why don’t they have any horns on their heads?”

My mother shushed me. Her hands were shaking. She was crying.

We stayed for one or two nights. We were one of the first groups who were deported.

We were deported on July 12 or 13. My grandfather and grandmother stayed behind.

On the day we left Srebrenica, the temperature was unbearable. Many fainted. We had no water to drink.

That’s why my grandparents decided to wait for the next day and leave then, because the weather might be cooler. We trusted the Serb army who told us, “Who wants to leave, can leave and who wants to stay can stay. No one will be harmed.”

Later we would all find out what really happened with those who stayed behind.

So, we left with the promise to see them tomorrow.

The separation of men and women

There was an elderly couple in front of us. The Serb soldiers tried to separate the husband from the wife. The elderly woman and her husband pleaded with them to let him leave with his wife because she was ill. They told the wife: “Don’t worry, you’ll find him in the Drina river.”

And they pushed the wife to go on and separated the husband to the side. I remember that my mother almost crushed my hand while watching this. She was shaking.

The women and little children were led to the busses and trucks. We had to go into a truck. One Serb soldier asked another if it wasn’t better to let the kids and women ride in the bus. The heat would suffocate them. The other answered: “I don’t care. Put them into the truck.”

We had nothing to drink in the truck. Many lost consciousness.

After some time, we arrived on the road toward Bosnian army positions. We left the truck and were told to follow and never to leave the road. I don’t know how long we walked until we met our first soldier.

I asked my mother where my grandfather is. She told me that he is gone.

He told us to go toward Tuzla. There was a refugee camp where we could stay.

As we arrived there people started to panic. What had happened to the men? Why aren’t they arriving? Over the following days fewer people arrived. Most of them, if not all, were women and children.

I did not know what was wrong. Women screamed and cried in agony. I asked my mother where my grandfather was? She told me that he is gone.

They were all dead. My grandfather was one of them.

Every day we could hear screams of anguish through the camp. We were all broken.

We survived, but a part of us died in Srebrenica.

In 2007, my aunt, my father’s sister, called him at work and told him that they had received a letter from the Red Cross. They have found my grandfather’s remains.

My father called us at home. I remember the moment like it was yesterday.

We were on summer holidays. On the phone he just said: “They have found grandfather.” I put the phone down. I went into my brothers’ room and told him the news. After that I left our flat and walked around for a few hours. I can’t remember where I went. I just had to get out. After that I went home and cried.

I was not there when he was buried. I was mentally not strong enough to go.

Years later my father showed me the photo with the items that were found with grandfathers’ body. I saw his watch and asked if I could have it. He asked his sisters in Bosnia if they were OK with that. My aunts were more than happy to give me a remembrance, because they knew how much he meant to me. 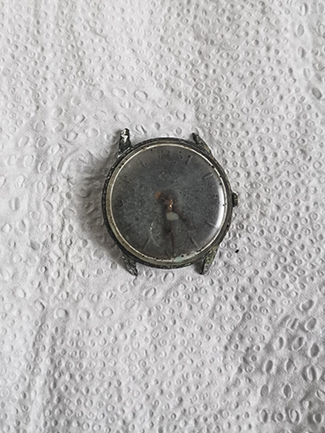 A photo of a watch that was found along the body remains of Selma’s grandfather. Photo: Family album.

This watch was found with the remains of my grandfather Suljo Jahić. His body was found in two separate mass graves. Some body parts are still missing.

I rarely talk about these experiences. Since we left Srebrenica I tried to forget everything. But you can’t forget a trauma.

As a child I rarely talked or smiled. My mother described me as a sad child. I rarely spoke in the Bosnian language as well. As an adult I had to confront everything and let my memories resurface. I cry a lot these days.

Sometimes I smell a certain fragrance in the air that reminds me of our home. Other times I look at my 4-year-old nephew and realize that I was his age when the war started and I never would want him to go through the same hell as I did.

No one should go through that hell.

I’m 32 years old right now. I was 7 when we left Srebrenica in 1995. To this day I’m still struggling with my memories.

Feature image: Family album. “This photo was taken a year before the genocide in Srebrenica happened. I was 6 years old. An UNPROFOR soldier took it. He was later dismissed from his position because he got too close to the people in our village.” Selma Jahic.