Why is health care in the Balkans deadly? - Kosovo 2.0
Perspectives | COVID-19

Why is health care in the Balkans deadly?

Neglect of the region’s health care systems is costing lives.

Albanian authorities were the first in the Western Balkans to report a COVID-19 related death when on March 11, 2020 an elderly woman passed away at Durres Hospital. Since then, the six countries reported over 20,000 deaths and 1.2 million cases of infection with the virus.

Before the pandemic shook the world, the Western Balkans rarely discussed their health care policies. Public interest was limited to reports on corruption and nepotism within the health care sector or the increasing departures of health workers to the EU.

Now, when the focus is there, some rightfully ask to what extent different policy choices could have saved lives and spared those who survived this virus from still unknown and under-researched long-term consequences.

More importantly, what could be done to protect those who so far managed to escape the virus.

These figures and comparisons are surprising and regularly dismissed with skepticism based on the fact that the region tested less than the EU. 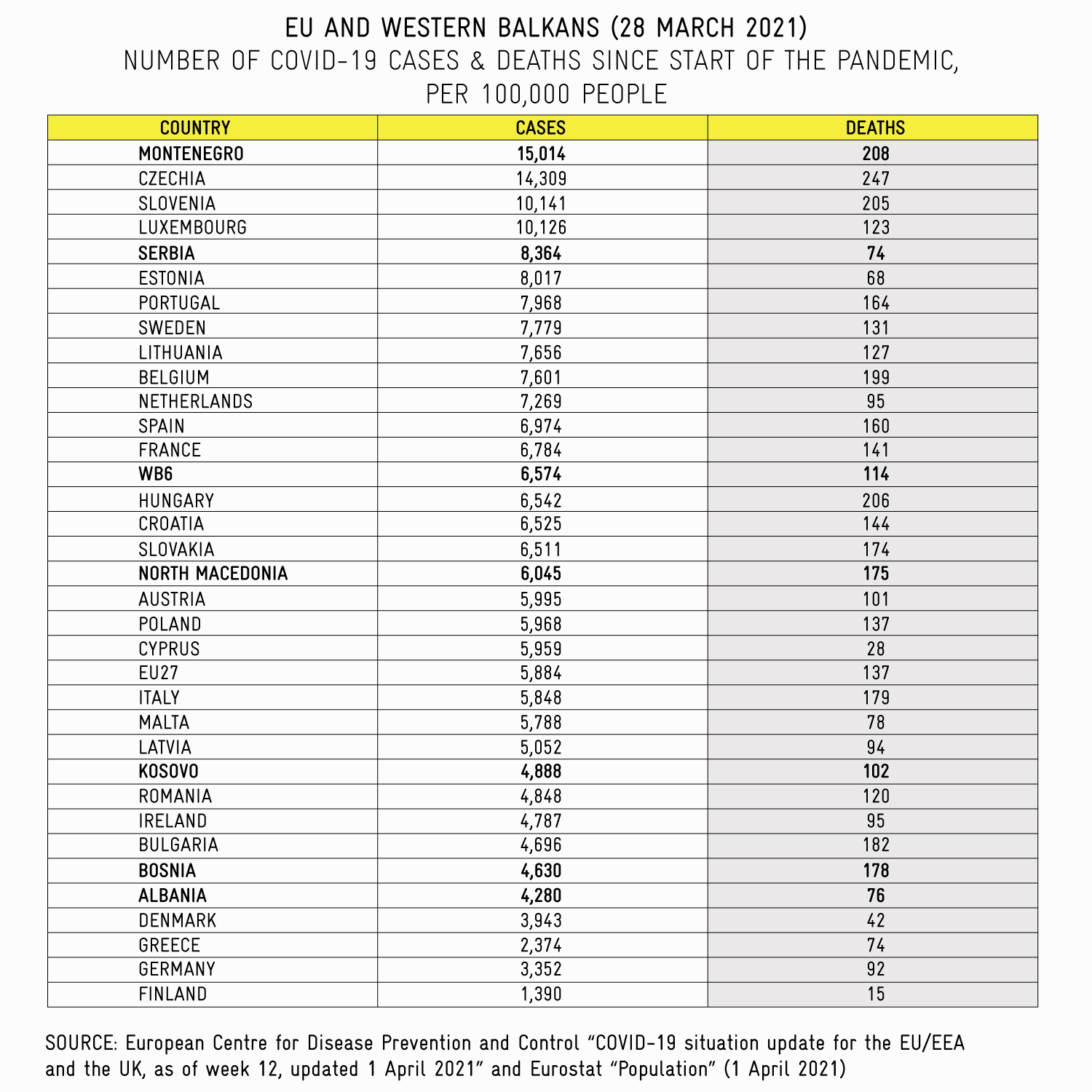 Indeed, health care systems across the Western Balkans, despite attempts to expand the testing capacities, so far managed to test less than the EU. More tests, however, do not necessarily mean more confirmed cases and deaths.

This becomes clear when looking at two much wealthier but with a similar population to the Western Balkans, EU examples: The Netherlands and the German region of North Rhine-Westphalia.

Healthcare systems were unable to quickly compensate their long-term underinvestment in their laboratories and personnel.

What the Western Balkans testing numbers do reveal is that despite some effort and support from the outside, especially from the EU, health care systems were unable to quickly compensate for the long-term underinvestment in their laboratories and personnel.

For example, Bosnia-Herzegovina managed to increase its testing capacities from 30,000 to 130,000 tests per month from April 2020 to March 2021. But this was still not enough to catch up with developed EU health systems. For that long-term planning and investment would be needed.

Testing numbers also reveal differences within the countries and in the region.

In Albania 68 percent of all tests were done in the Tirana-region where only 32 percent of the population lives. For every 100,000 people, Albania and Bosnia-Herzegovina, the two worst performing countries, tested three times less than Montenegro.

For every 100,000 residents, Montenegro registered more Covid-19 cases than any other country in the Western Balkans or in the EU.

In response to the spread of the virus, the Western Balkans authorities struggled to balance stricter lockdown measures and the pressure to keep the already weak economies running.

Without solid experience in the successful development of evidence-based policies, governments were also forced to bring together their economic programs of support against rather modest financial means.

Compared to the EU, except during the first three months of the pandemic, the region not only opted for much looser lockdown measures but also found it difficult to enforce them.

The consequences of such an approach are most visible in Montenegro. Authorities, caught up in a three-month long government formation process after the August 2020 elections, struggled to find ways to even support their most important sector. During 2020, tourism there experienced a fall of 83 percent.

On average, per 100,000 residents, Montenegro registered more COVID-19 cases than any other country in the Western Balkans or in the EU. Authorities focused on ramping up the capacity of the health care system. In March 2020, daily testing capacity was just 20. By March 2021, it increased to almost 1,600.

Despite investment, the health care system struggled to keep the COVID-19 patients alive. For every 100,000 residents, Montenegro registered more deaths than all Western Balkan countries and EU member states, except for Czechia.

Experts find it difficult to provide a clear explanation why some countries register more deaths than others. Potential factors include the overall resilience of the health system and population’s health, availability of treatments, and even the levels of air pollution.

When it came to the COVID-19 vaccination, the Western Balkans weaknesses surfaced.

Already in summer 2020, governments across the EU developed their vaccination policies based on the assumption that in order to protect the population from the virus, they would need to vaccinate between 60 and 90 percent of their population. This is partly why already in early October 2020, they signed contracts to purchase 1.1 billion doses for their 447 million citizens.

To do the same, governments in the Western Balkans needed to purchase enough doses to vaccinate between 10.7 and 16.1 million people. Since most vaccines require two doses for one person, this would mean that the region needs between 20 and 30 million doses of vaccines.

So, what did the Western Balkans governments do?

By late October 2020, the six countries secured contracts for 5.2 million doses of vaccines via the Covax mechanism. Except for Serbia, in three months that followed, no other government engaged in any other purchase.

The reason for their passivity was that the European Commission by mid-December 2020 signed contracts to purchase 2 billion doses for 447 million citizens and behind closed doors promised that the Western Balkans would be able to get the EU’s vaccines surplus.

Governments in the region, with no clear time frame or assurances from the Covax or the EU, simply thought that with 5.2 million doses from Covax they could start the vaccination. And that they could then finish the job with the EU’s surplus.

This proved to be a flawed plan when in late December 2020 shortages and delays with the rollout of the vaccines in the EU became evident. Instead of at least trying to find possible alternatives, something that at this late point was hardly going to lead to a short-term success, most governments in the region did nothing.

Confronted with such bleak reality and pressured by their citizens, governments in the region finally understood they have to look for other ways.

It was in the last week of January 2021 that the European Commission’s President gave a public promise that the Western Balkans would be able to tap into the EU’s surplus. But at the same time Ursula von der Leyen made it clear that this could only happen if it is not “interrupting our national vaccination campaigns and is done in coordination with pharmaceutical companies.”

Confronted with such a bleak reality and pressured by their citizens, governments in the region finally understood they have to look for other ways to source vaccines.

In Bosnia-Herzegovina, due to the country’s decentralized organization, at least four governments were able to engage in direct purchase. So far, however, except for several donations and individual vaccinations in Serbia, only one government has managed to directly purchase and receive 42,000 doses of Sputnik V.

Serbia is the only country in the region that in summer 2020 began to make agreements for the direct purchase of vaccines. For 7 million citizens it has so far ordered 15 million doses from producers in the EU, the US and the UK, but also from Russia, China and India.

With a focus on purchasing as many vaccines as possible, the government has come under severe criticism for not being transparent. Since the vaccination is taking place at the time when scientific evidence about efficiency and safety of some of the purchased vaccines is missing, some claim that the government is playing roulette with the nation’s health.

With the current pace of vaccination, except for Serbia, no country can realistically hope this year to reach a 60 to 90 percent vaccination rate this year.

While other countries in the region struggle to purchase vaccines, Serbia is struggling to convince enough citizens to get their shot. In a society exposed to fake news, conspiracy theories and fading trust in the institutions, it should not be a surprise that so far, despite being widely available, only 20 percent of citizens applied to get the vaccine. To reach between 60 and 90 percent, authorities in Serbia face a challenge that requires careful policy considerations aimed at building trust. Some warn that other countries in the region will face the same challenge, as soon as the vaccines start to arrive.

While the Covax mechanism started to deliver the first vaccines to the region during the last week of March 2021, no Western Balkan country so far has benefited from the EU’s surplus.

With the current pace of vaccination, except for Serbia, no country can realistically hope to reach a 60 to 90 percent vaccination rate this year. This means that, unless something dramatically changes and the EU’s surplus starts to arrive to the region, citizens and policymakers in the Western Balkans should brace themselves for many months of balancing between stricter lockdown measures and the pressure to keep the even weaker economies running.

With the COVID-19 pandemic here to stay, this should become self-evident to the citizens and politicians across the Western Balkans. And they should act to make their policies deliver better results, sooner rather than later.