Will Kosovars soon be heading for departures? - Kosovo 2.0
Lately | Visa

Will Kosovars soon be heading for departures?

Citizens react after this week’s step toward visa liberalisation.

For Kosovars who fly frequently, Sejdi Sllamniku is a familiar face. The 57-year-old taxi driver from Dragoli, the village immediately next to Prishtina Airport, waits every day in front of the arrivals gate waiting for locals and tourists in need of a ride. Although he listens to his passengers’ stories of their travels every day of the week, he has never himself had the opportunity to travel beyond the immediate region.

With an important step having been taken this week toward Kosovars no longer requiring visas to travel to Europe’s Schengen Zone — with the European Commission confirming that Kosovo has fulfilled the last remaining criteria for visa liberalisation — Sllamniku thinks of his curiosity to travel and to see how people in different countries live. He is particularly keen to visit Albanian communities spread out in Western European countries and to witness for himself the experiences of Kosovars living within the diaspora. 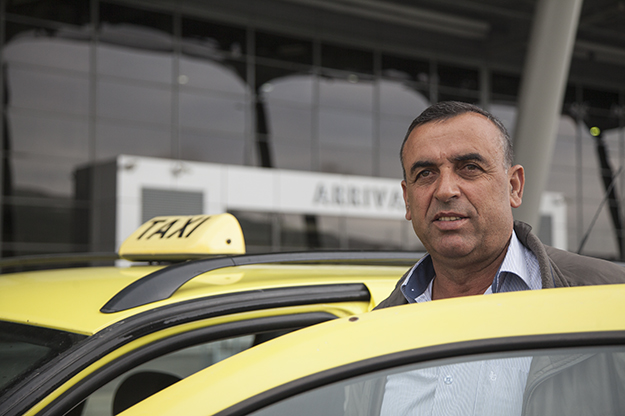 Taxi driver Sejdi Sllamniku drives passengers to and from the airport daily, but has never had the opportunity to travel beyond the region. Photo: Majlinda Hoxha / K2.0.

But for Sllamniku, even as the potential of visa liberalisation has moved one step closer this week, the prospect of being able to afford to tick much off his wishlist of travels remains a distant one.

“Maybe I might be able to see, let’s say, one place, but the majority of people in Kosovo don’t fill the conditions to travel,” he says. “You need money to travel. People who are already travelling will continue to travel, just without needing visas — those who have better financial means.”

It’s a view echoed by many others around Kosovo in recent days, such as Faton Neziri, a sportsman who works as a salesperson in a DIY shop.

“We don’t need visas to visit Turkey, for example. But just a few people have the possibility to travel there,” he says. “In the end it’s just a trip. You don’t have the right to work there. You’ll just spend money and won’t gain anything. Visas will only serve people who are in business.” 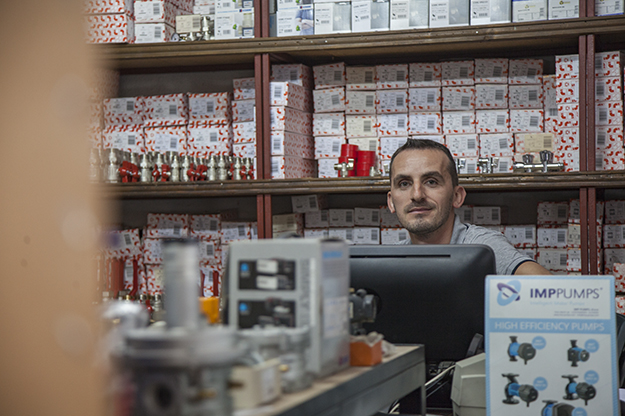 Faton Naziri does not believe that visa liberalisation will have much impact on many citizens, since they will not be able to afford to travel. Photo: Majlinda Hoxha / K2.0.

A 25-year-old woman working at one of Prishtina’s Viva Fresh stores also sees no prospect of any imminent travels. “Where can I go with my salary of 200 euros?” she smiles, sarcastically.

Dialogue with the European Union on formally ending the visa regime for Kosovars wanting to visit the Schengen Zone formally began six and a half years ago, back in January 2012. In May 2016, the European Commission confirmed that Kosovo had fulfilled all 95 criteria that it had been working toward, but simultaneously announced that its proposal for the visa regime to be lifted was pre-conditioned by two new criteria — ratifying its border with Montenegro, and strengthening its track-record on fighting organization crime and corruption.

Two years later, Wednesday’s European Commission report confirmed that Kosovo has now met these two additional criteria and that the process will move on to the European Parliament and Council, which both need to approve the recommendation. Although there are claims by Kosovar politicians that citizens will be travelling visa free by the end of the year, such words have been oft-heard in recent years, and there is no fixed timeline on how long the remaining procedural steps will take.

Sceptical that the latest development is just another false dawn after years of feeling let down by Kosovo’s politicians and the European Union, for Neziri it has become a tired topic that has unjustifiably distracted attention from Kosovo’s real problems.

“Maybe it will be done in six months, but I don’t believe this,” he says. “In fact for around eight years this has been such an important topic in the media, the institutions and everywhere. I hope that it will really happen, and maybe then we will deal with how to tackle the high level of unemployment, which is so much more important than visa liberalisation.”

“It will be the main mirror that will show to the world the extent of Kosovar people’s dissatisfaction."

Flamur Bublica, a 23-year-old journalist from Lipjan, thinks that despite visa liberalisation only allowing for short stay visits of up to three months, if and when it does occur it could herald similar mass migration attempts as witnessed in the winter of 2014-15 when tens of thousands of Kosovars attempted to leave the country and head toward Hungary.

“Considering how angry people are with the governance until now, at the first chance many will try to leave the country,” he says. “It will be the main mirror that will show to the world the extent of Kosovar people’s dissatisfaction.”

Bublica’s fears are not without some precedent. EU data shows that after visa regimes were lifted for Kosovo’s neighboring countries in the region back in 2009 and 2010, this was followed by “serious challenges” in terms of a rise in EU asylum applications and refused entries for citizens of these countries. In the year after Serbia gained visa liberalisation, in 2009, EU asylum applications by Serbian citizens increased by 300 percent, while applications by citizens from Albania went up 40 percent after they were able to travel visa free from 2010.

Ahead of Georgia and Ukraine receiving visa liberalisation — in March and June 2017 respectively — the EU introduced the Visa Suspension Mechanism, which would allow EU members to temporarily suspend visa-free arrangements in certain circumstances, such as a sudden rise in unfounded asylum applications. According to a recent Balkan Policy Research Group report, in an effort to avoid such circumstances, Kosovo’s government should soon be ready to implement an information campaign on the obligations of visa-free travel.

In the meantime, there are those who are prepared to take the personal risk of ignoring such obligations, and using the freedom to travel for other purposes. A young man from Malisheva sees visa liberalisation as an opportunity to generate income, despite not being allowed to work under the visa waiver conditions.

“We have many relatives in the EU that can shelter us without needing to have a lot of money with you, or to sleep at hotels,” he says. “So, I see visa liberalisation as an opportunity for illegal employment, knowing that the work there is paid much better than here in Kosovo.” 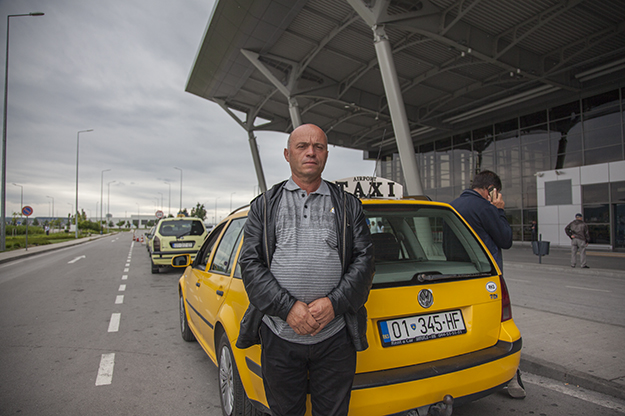 Sejdi Sllamniku’s employer at Prishtina Airport fears that the opening of Schengen borders will see all of his employees leaving the country. For Muharrem Latifi, the owner of a taxi company that manages the taxi drivers at the airport, stories of hopelessness and desperation are a daily occurence.

“People thought that it would become better in this country,” he says. “But it didn’t, it just became worse.”

As he speaks another taxi driver clicks his fingers toward him. “You see him? He asks if we made any money today,” Latifi says. “If visa liberalisation happens, half of Kosovo will become empty. I hear disappointment from people who have jobs, let alone from those who don’t. All my employees will leave me.”

While the taxi drivers wait on, their daily earnings relying on both luck and the lack of alternative transport options for travellers landing at the airport, Fatime Morina waits enthusiastically to see her daughter coming through the arrivals gate on her flight from London.

Together with two of her other children, she has travelled from Drenas in order to greet her loved one off the plane. As any future visa liberalisation wouldn’t include the United Kingdom — which is not within the Schengen Zone — she is hopeful that in the future she will at least be able to visit her siblings in France and Switzerland.

“I never visited them because I didn’t have the means to go,” she says. “Then it’s so hard to get a visa. So many documents — I’ve never even tried to apply for one.” 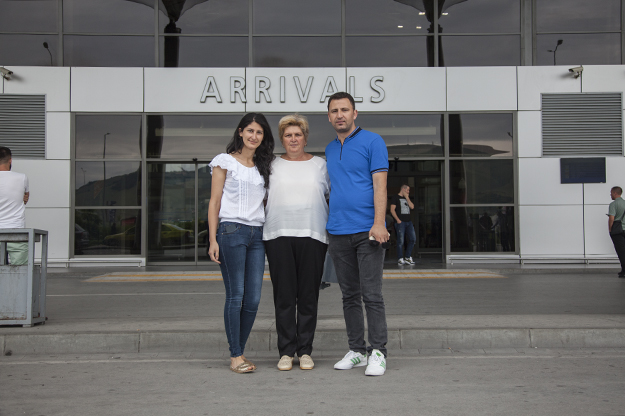 Fatime (center) and Muhamet (right) Morina believe that visa liberalisation would help to unite them with their family members who live in the diaspora. Photo: Majlinda Hoxha / K2.0.

“It will make the whole process easier,” her son Muhamet adds. “It will unite families. There are overly long procedures at the embassy, and this burden will be removed.”

Xhezide Gashi is one of those who is fairly well acquainted with the exhausting steps required to make a visa application. She has often gone through the same experiences that are familiar to  many Kosovars, including long waits in front of embassies, the collection of multiple documents, and forking out for non-refundable tickets that become worthless if the visa application is denied. 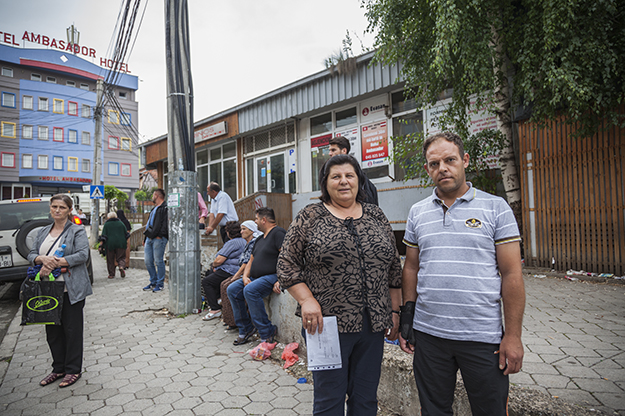 Xhezide Gashi has previously been successful in applying for Schengen visas, but cannot wait for the expensive and time-consuming visa regime end. Photo: Majlinda Hoxha / K2.0.

Accompanied by her son, she stands in line in front of the Swiss Embassy, waiting to have her name called out. Already having five Schengen visas she hopes that she will soon have a new visa in her passport — this time for the last time.

“Every time I’ve applied for a visa to visit my daughter [there have been] so many things before they took the passport,” she says. “I hope this will really come to an end. This time alone I’ve had to come here three time and have spent 200 euros for the visa and the other things required.” 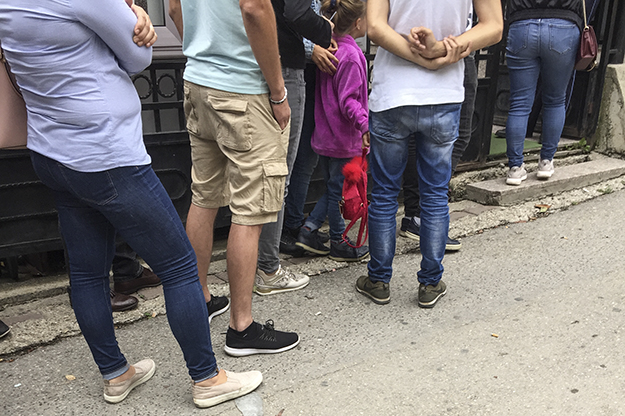 Kosovar citizens have been forced to go through the burdensome and degrading process of applying for Schengen visas, years after citizens of neighboring countries have been able to travel freely. Photo: Majlinda Hoxha / K2.0.

Alongside the removal of barriers to visiting relatives abroad — over half a million people of Kosovar origin are estimated to live in the EU — for many young people in particular, visa liberalisation would be a symbolic step, putting an end to an enduring violation of freedom of movement and to what is widely perceived as Europe’s discrimination against Kosovars.

“Visa liberalisation for me is opening the borders to [people from] Kosovo and giving the opportunity to be freed from this isolation experienced by all of us Kosovar citizens,” says Bublica, the young journalist from Lipjan.

“The importance of it lies on the fact that it will withdraw society from isolation and it will put Kosovo in an equal position with other Balkan countries,” agrees Shkodran Hoti, a student from Istok. “Furthermore, it will enable us to experience new realities.”K