Women and girls’ online businesses that are thriving.

Afërdita learned 22 years ago about the first second-hand clothes store in the neighborhood where she grew up in Prishtina. A friend of hers recommended that they go together to find the kind of clothes that she was looking for, “each different from the other.”

“If only I had two mannequins, I would have done everything,” said Afërdita on realizing her dream of working with clothes. When she was jobless eight years ago, she started thinking about what exactly she could do. Opening a store with new clothes –– which was the first thing that crossed her mind –– was quite expensive. So she researched the market and decided to open a store with used clothes.

“I wanted to do something by myself, with my own effort, without anyone’s help,” Afërdita said. “Not because there was no one who was willing to help me, but I wanted to do it myself.”

So, she began to research how to supply her store. First, she got supplies from a trader who brought used clothes from other countries to his warehouse where other people also purchased supplies. Afërdita had to beg him and pay extra to be able to choose the clothes herself, one by one.

In 2018, she rented a small space in the Kodra e Trimave neighborhood in Prishtina hoping that people would be interested in this “experimental phase” of hers.

Although, in the beginning her project did not garner much support from people she had spoken with because of the stigma about used clothes. But things began to change when the store opened. For Afërdita, opening her own shop was a way to prove herself to people who doubted her idea.

“Great persistence is needed for your goals, to achieve them, especially in countries like ours,” said Afërdita, adding that being a woman makes things more difficult.

The latest data from the Kosovo Agency of Statistics shows that in 2021 only 22.7% of women in Kosovo were employed and that out of about 2,500 businesses opened during the first three months of 2021, only 23.2% have women owners.

In this system of unequal gender balance, women are taking advantage of various opportunities to open their own businesses. One of them is selling used goods through online platforms, which lowers the cost of starting a business.

With the old towards the new

What in English is known as thrifting is simply purchasing clothes, furniture, books, accessories and so on from shops where second-hand products are sold –– simply anything that has been used before by another owner.

People who buy in second-hand stores know that finding a good item takes time and dedication, which is why sometimes it is called a “thrifting hunt,” or “hunt for used things.”

This was one of the reasons why Vita Beqiri, a 29-year-old entrepreneur from Peja, decided that her used clothing store “HipVintage” would operate only online, through Instagram and Facebook pages and now through its website.

“The webpage makes it easier for people,” said Beqiri. “Because you have categories you can look through, for example, if you are looking only for sweaters, you don’t have to look through all the posts, you can classify them instead.”

In 2018, Beqiri decided to reactivate the store’s accounts on the social networks that had initially been launched some time ago by her sister, but which had closed in the meantime. Dissatisfied with her previous work, Beqiri, who has a degree in painting, devoted all her time to this business and now, four years later, her business account on Instagram is followed by around 7,000 people. 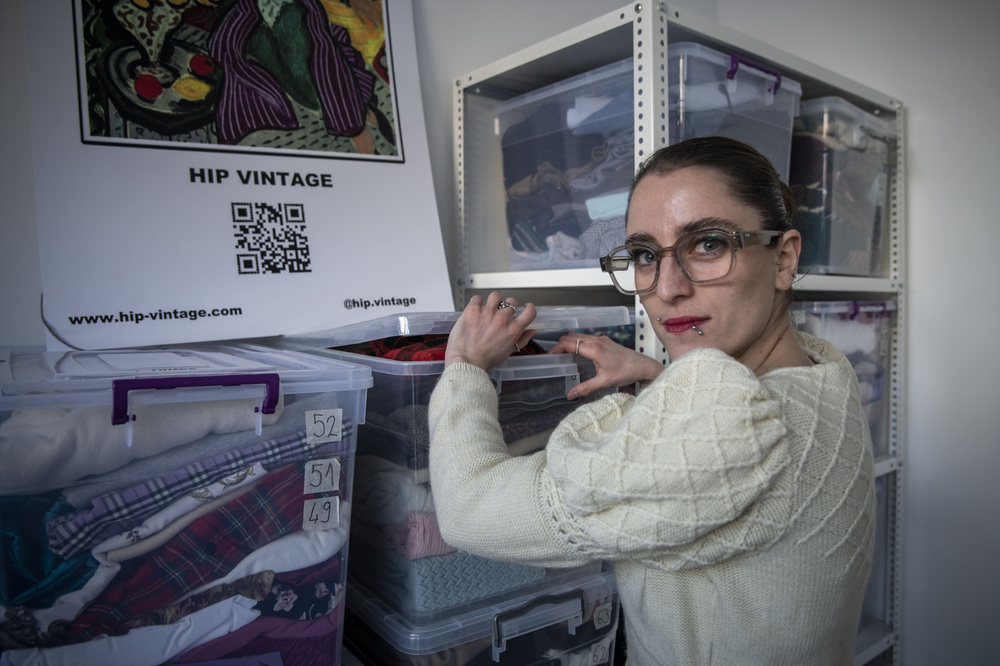 In Kosovo, second-hand shops date back before the era of digitalization, but with the advent of online marketplaces, these types of businesses, since 2008, have capitalized on the opportunity to reach a larger audience and to help users navigate the field.

One of the largest online trading and exchanging platforms in Kosovo, “merrjep,” enables users to put up for sale whatever they own but no longer use. With just one search, you can find many items on sale, from dozens of used chairs to cars. The platform allows the potential buyer to contact the seller through a phone number. Opened in 2008, the platform states that about 70,000 people use it and that it publishes up to 2,000 ads per day.

Such sales exchanges are also present in smaller groups on Facebook. In addition to these online platforms and Facebook groups, there are dozens of shops in Kosovo that sell antique goods that have been imported from abroad such as furniture, lamps and many other things.

Shifting from physical stores to online shopping has enabled a high degree of comfort for buyers when selecting and purchasing their goods. Moreover, it allows the owners of these businesses to operate at a lower cost.

In Kosovo, this kind of business has created space especially for women and girls. Being caught between an employment landscape that doesn’t give equal opportunities and the difficulties of  entrepreneurship, the trend of online business seems to be the needed solution to increase the representation of women in working labor.

Even though Afërdita had started to operate through a physical store, her daughter convinced her to open an account on Instagram. Opening an online store was a whole new thing for her.

“While I was in that physical store, when [my Instagram account] was opened, requests started, I did not know how online ordering worked, I had no idea,” said Aferdita. But she determined, “when you want to do something, you learn all the ways.”

“In the beginning I started to deliver orders myself, because I have a car, but after a while it became impossible because there were requests from far away,” she said. After that, she contracted with an express post service to deliver orders.

Working online made it easier for both her and her customers.

“I liked the idea that when [customers on Instagram] liked something, they just came and took it,” said Afërdita. She saw the increased ease for customers who could check the size and price of items without having to go through the hassle of coming to the store. 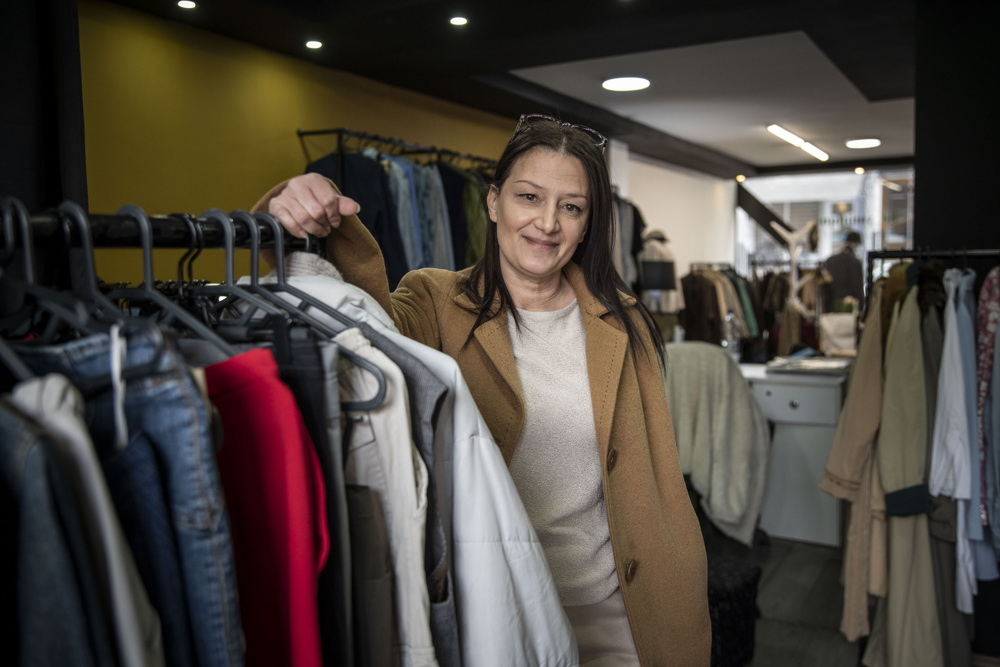 For Afërdita Salihu, starting her own business “BeYounique” was proof that she could do something on her own. Photo: Ferdi Limani / K2.0.

After some time, Afërdita closed the physical store and shifted completely online, as she wanted to open another one closer to her house. But the pandemic changed her plans, as she was unable to work while the whole of Kosovo was in complete isolation.

When the COVID-19 pandemic brought the total closure of Kosovo in March 2020, many businesses closed, further aggravating the economic situation. According to data from the Kosovo Business Registration Agency (ARBK), from March 2020 to March 2021, about 1,500 businesses were closed, however the number is thought to be much higher.

During this time many Kosovars were unemployed. The situation became worse for women, both at home and at work. A report by Democracy for Development, an organization focused on research and policy analysis, found that in Kosovo, 5.3% of women and 2.6% of men had their employment contracts terminated as a result of the pandemic and 26% of women were sent on unpaid leave.

For Beqiri, the period of complete isolation during the first months of the pandemic made it completely impossible for her to function because she had all her belongings in Prishtina though she was based in Peja. But for Afërdita, the pandemic’s experience restored her need for a clear division between work and home.

Online businesses’ operations during the pandemic also brought an additional difficulty for women working from home. In addition to having to work for their own business, they were burdened with housework and childcare. Afërdita faced these difficulties as well.

"I couldn't separate the time between being a mother and being the one managing the store," said Afërdita.

Separating the work for her store with the housework has been difficult, as there was no such division for her, especially with the lack of a designated space to carry out each activity.

“I couldn’t separate the time between being a mother and being the one managing the store,” said Afërdita.

In December last year, she decided to reopen a physical store in the Dardania neighborhood in Prishtina, where she receives many customers, most of them girls and women.

The increase in online sales during the pandemic in Kosovo has buoyed online businesses, often becoming the key source of funding for women and girls running these businesses. Beqiri and Afërdita’s online stories have products ranging from 10 to 40 euros. With an added delivery payment, they often are able to secure a safe profit.

For Afërdita, profits from the store are enough..

Likewise, Beqiri says that it is impossible for her to deal with anything other than the HipVintage store — she has even left painting behind. The dedication to selecting and preparing clothes, posting them on social networks and communicating with clients, has turned into a full-time job for her.

“I’m going to mention a meme on the internet that was very funny: “I didn’t want a job from eight to four, now I work 24 hours,” said Beqiri.

In addition to the profits, for Beqiri, she appreciates continuing to learn about business management and the independence that comes from not being under contract.

“I always hear ideas about how to develop the business, especially from my relatives but also from people who deal with it, but I knew it better myself,” said Beqiri. “I’m always communicating with those clients. You know that saying ‘learning by doing.’ So gradually things are getting bigger and better, luckily.”

While the low representation of women and girls in the labor market continues to be one of the factors maintaining gender inequality in Kosovo, digitalization seems to have opened a window for women entrepreneurs in Kosovo.