A year without victory

On Sept 5. 2016, Kosovo made their World Cup debut during an emotion drenched trip to the Finnish coast. Uncertainty over player eligibility and a raft of other off-field stresses couldn’t prevent Kosovo from earning a 1-1 draw against Finland in Turku, and kicking their first ever qualifying campaign off with pride.

Kosovo’s goal that night came from Valon Berisha, who buried a second half penalty just hours after he received official clearance from FIFA to be able to represent his chosen national team. But a year to the day later in the return match with Finland, the same player found himself spreadeagled on the pitch at full time, staring up at the Shkoder sky, contemplating Kosovo’s seventh straight defeat.

The 0-1 loss was perhaps tough on Berisha, who has become one of Kosovo’s most consistent performers. It was he who came closest to a Kosovo goal, forcing a fine save from Lukas Hradecky early in the second half, but it was a rare moment of incisiveness from Kosovo in a match where they rarely looked like scoring. 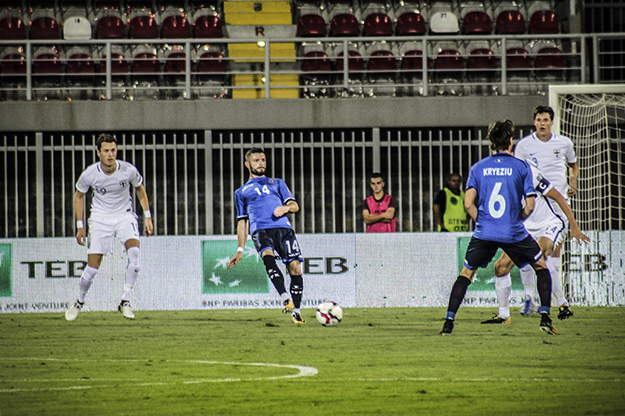 Kosovo’s most consistent player in the past year has been midfielder Valon Berisha, who plays domestically for Red Bull Salzburg in Austria. Photo: Agan Kosumi / K2.0.

The result will be bitterly disappointing to manager Albert Bunjaki, who has indicated that he is likely to leave his post soon but is determined to give his country their first win before doing so, with this match seen as his best chance. Bunjaki cut an imploring figure throughout the game, perched alone at the very edge of his technical area for the full 90 minutes.

The players reactions to his consoling of them at the full time whistle, as well as captain Samir Ujkani’s outspoken backing of his manager over the summer, suggest Bunjaki still has support in the dressing room, but he is running out of it in almost all other areas.

Excuses for this loss can perhaps be found in the freak storm in Zagreb over the weekend that delayed the completion of Kosovo’s match with Croatia by a day, halving preparation time for the Finland game. In many ways it has been an entire campaign of extraordinary circumstances resulting in insufficient preparations. 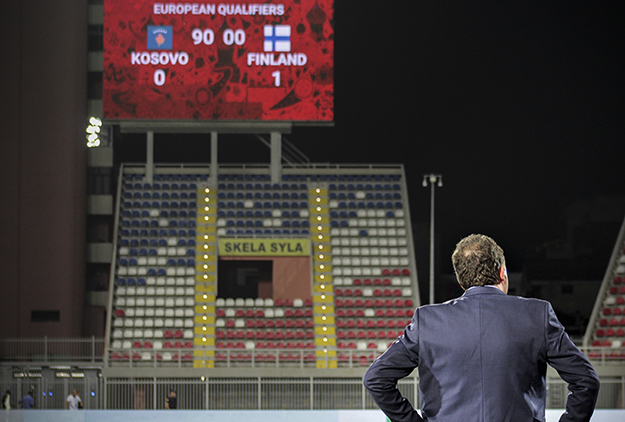 Kosovo’s manager Albert Bunjaki has come under intense scrutiny during a year without victory, despite the challenging external conditions in which he is working. Photo: Agan Kosumi / K2.0.

Uncertainty over player eligibility didn’t end in Turku, with Bunjaki repeatedly being left unsure which players would be available to him throughout the campaign, as FIFA has decided each player’s fate on a case by case basis, often just hours before matches have been due to start.

Problems with venues have also plagued the team. The late decision to host the away match to Ukraine in Krakow was unsettling, but the main issues have come at ‘home.’ Delays to the renovation of the City Stadium in Prishtina have resulted in all of Kosovo’s home games being played in Albania, at the Loro Borici stadium in Shkoder, where the side has never really settled. The loss to Finland confirms Kosovo’s trend of securing a better result in the away match than the home match for each team that they have played twice. 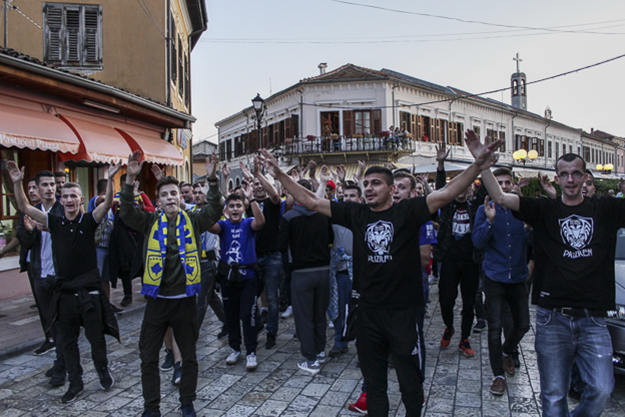 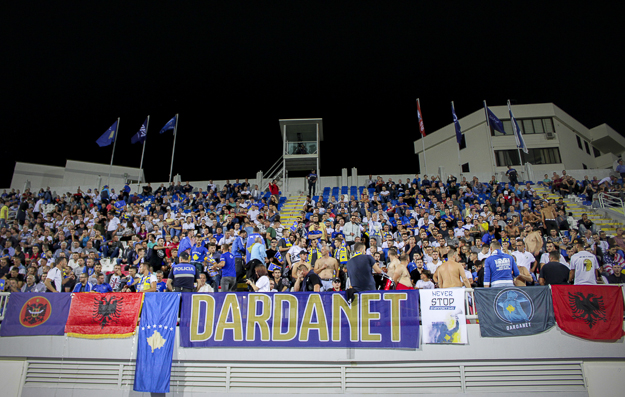 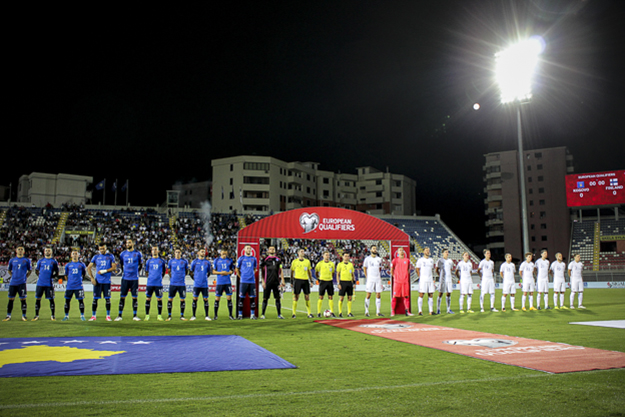 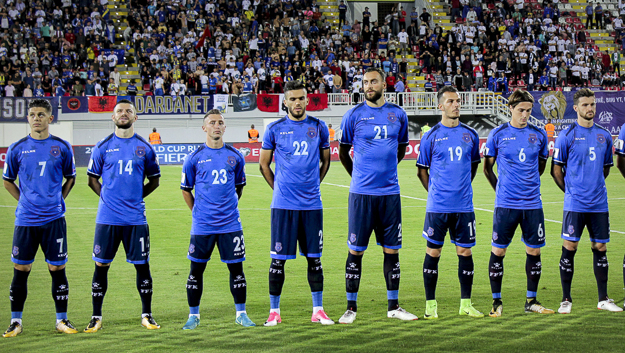 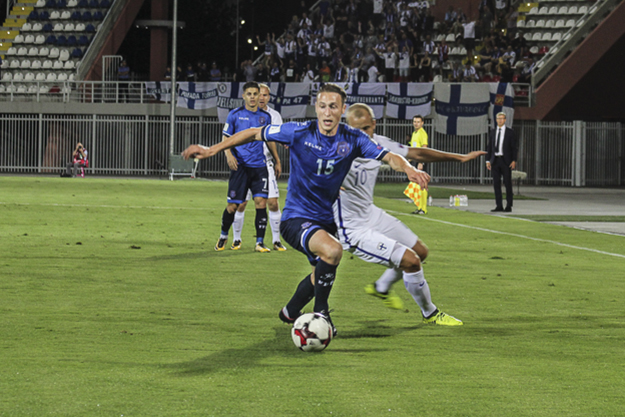 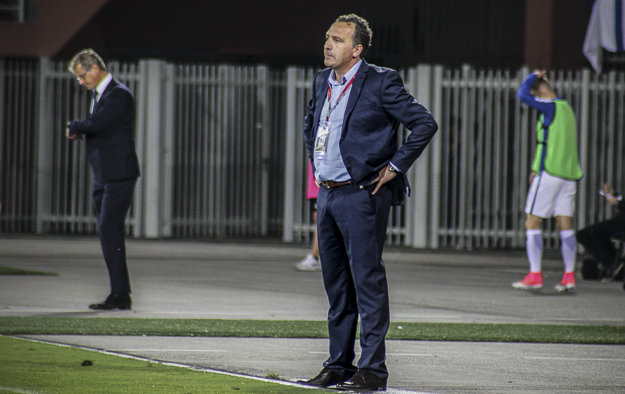 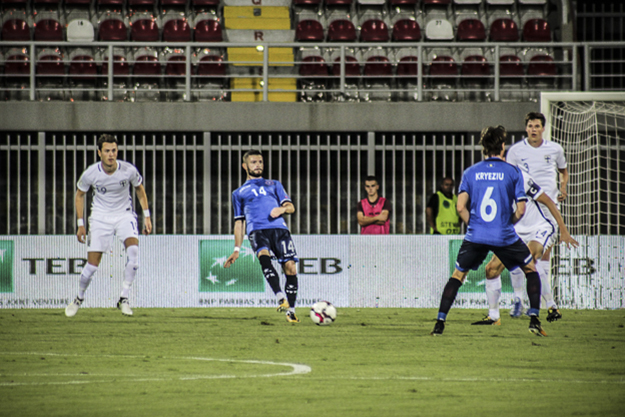 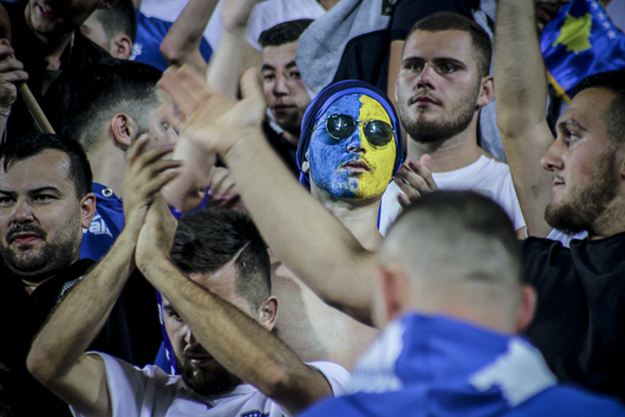 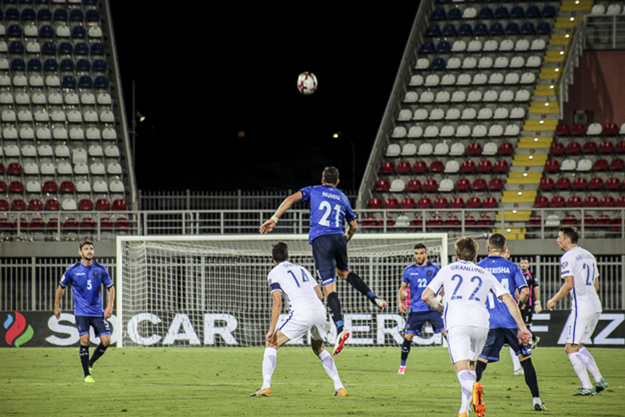 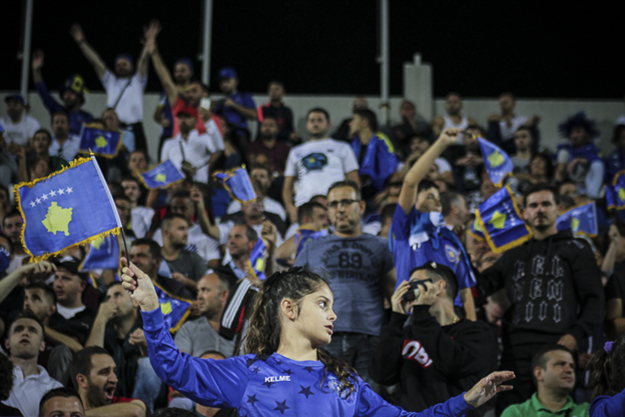 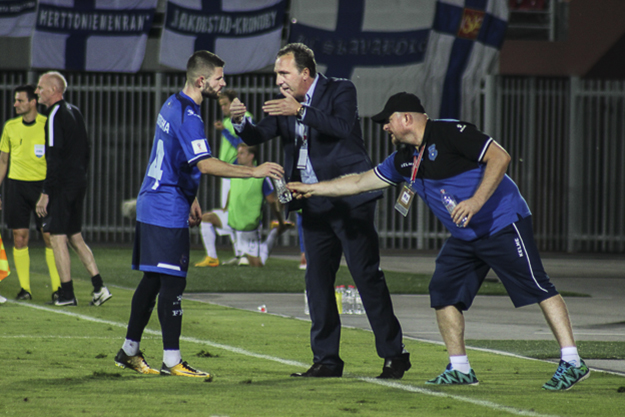 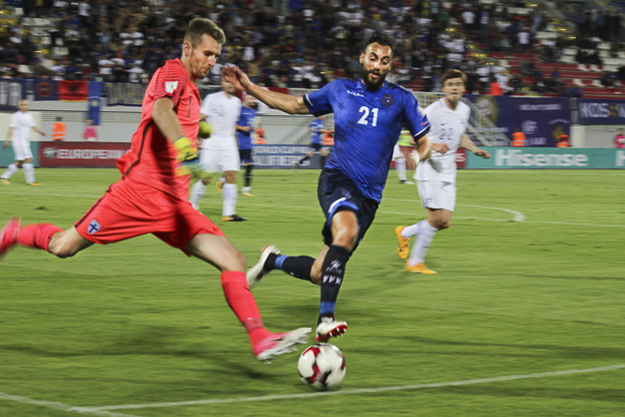 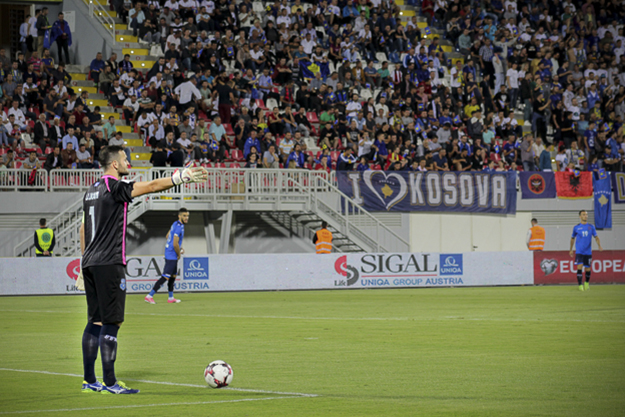 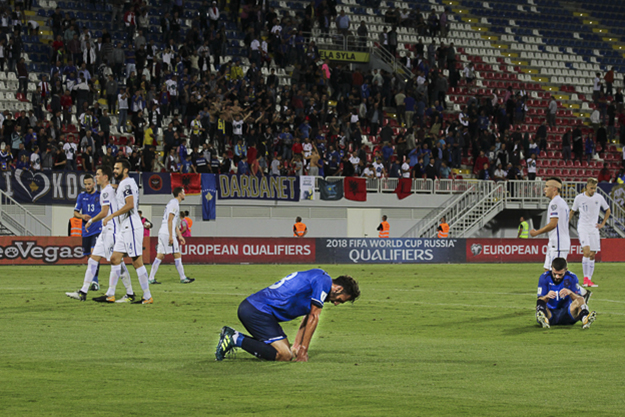 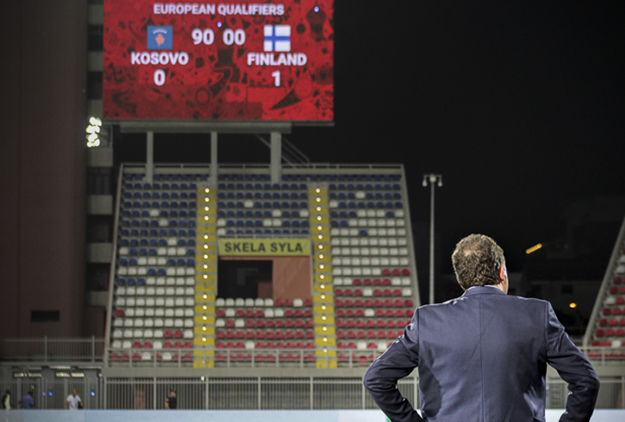 The defeats and lengthy travel time have seen fewer and fewer fans making the trip to Shkoder, with attendances dropping from a near 15,000 sell out in the first match with Croatia to just 2,500 against Finland. While the atmosphere is in no way toxic at Kosovo’s matches in Shkoder, it is far from intimidating, and in danger of becoming underwhelming in the face of entirely empty stands.

Kosovo’s best moments in the campaign have come away from Shkoder. A trip to Antalya in November saw Kosovo go a width of a post away from taking the lead against Turkey, before succumbing to two second half goals. This month’s trip to Zagreb meanwhile saw Kosovo put in easily their most assured defensive performance, looking transformed from the naive debutantes that conceded six to the same side the previous October.

However, the aforementioned disruptions shouldn’t justify some recurrent on field problems. Full back has been a consistent weak spot, with mistakes in this area leading to both of Iceland’s goals in March’s 1-2 home defeat.

Bunjaki’s attempts to solve the problem with a back three resulted in a 1-4 hammering at home to Turkey in June. Finland’s sole goal in Shkoder came from an attack down Kosovo’s left just two minutes after Bunjaki replaced left back Leart Paqarada with striker Vedat Muriqi, switching to a back three in the process.

The midfield has been a bright spot, with competition for places even emerging for the attacking positions between Milot Rashica, Arber Zeneli, Bernard Berisha, Donis Avdijaj and Besar Halimi, while Enis Alushi and Hekuran Kryeziu have developed a strong understanding in defensive midfield. 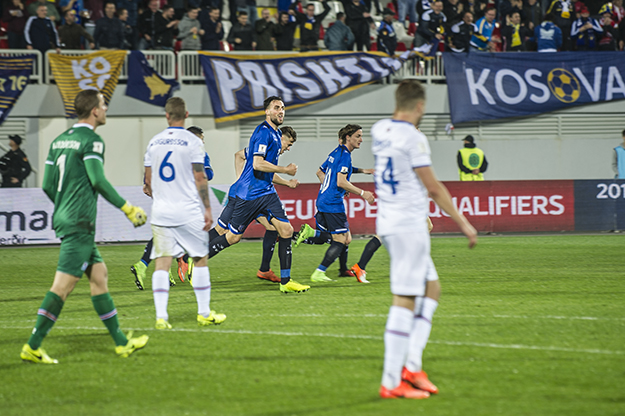 However, the player leading the line and providing Kosovo’s main striking threat has been a constant doubt. Atdhe Nuhiu made an impressive debut, scoring against Iceland but has struggled since, while Erton Fejzullahu and Muriqi have also failed to prove themselves so far.

These issues up front were expected to be solved by returning hero Besart Berisha, consistently one of the highest goal scorers in the Australian A-League for the past six years, including topping the scorers list last year and in 2011/12. However, after an underwhelming debut against Iceland at home, he found himself dropped to the bench for the home match with Turkey. Berisha didn’t take the news well, announcing after the 1-4 defeat that he would never play for Kosovo again whilst Bunjaki remains manager.

The future isn’t all bleak. Kosovo’s under-21 side registered a stunning 3-2 comeback win against Norway in Mitrovica on Friday night.

He might not have to wait long. Bunjaki may have been given a difficult job attempting to navigate Kosovo through this debut campaign, but the bad results are stacking up. It’s now been an entire year that Kosovo’s football fans have known nothing but defeat. Two games remain in order to rectify this situation, in Reykjavik against Iceland and another match in Shkoder against Ukraine. With the situation incredibly tight at the top of Group I and both teams harbouring ambitions to finish in the top two places, it seems like a tough ask.

The future isn’t all bleak. Kosovo’s under-21 side registered a stunning 3-2 comeback win against Norway in Mitrovica on Friday night, before only narrowly losing 1-0 in Germany on Tuesday.

Also, while Kosovo’s string of defeats have left them lowly ranked in the FIFA rankings and will likely leave with them a tough qualification group for Euro 2020, they are also all but guaranteed to enter Group D of UEFA’s new Nations League tournament, alongside the 15 other lowest ranked sides in UEFA. A strong performance in this tournament against a much more equal standard of opposition would hand Kosovo a second chance to achieve a seemingly unlikely place at Euro 2020.K