“I am not against the police, but they are protecting the thieves” said E.G., 15, from Peja. Like many others his age, on Saturday afternoon he spent the day engaged in a game of cat and mouse with Prishtina’s police force. E.G. told Kosovo 2.0 that like many of those others, he had thrown stones. It was not the first time that he had done so either, he said.

Between nervous glances over his shoulder — the first attempt at an interview was interrupted by a police charge, which sent E.G. and other youngsters running — he explained how he had travelled to Prishtina for multiple anti-government protests in recent months. 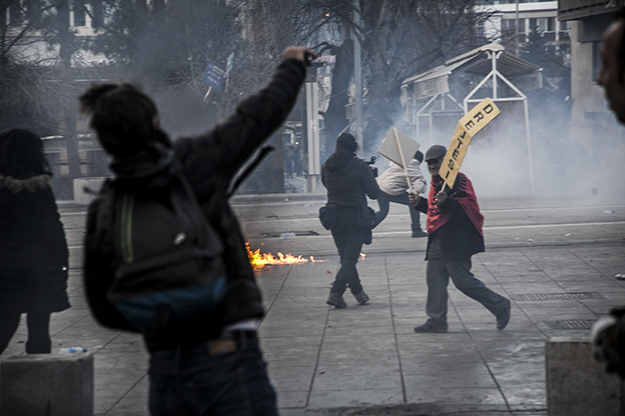 E.G. also claimed to have helped set rubbish bins on fire; many other young people hurled petrol bombs at police officers. Earlier in the day, two police officers had been set on fire by petrol bombs. The majority of those involved in the violence later in the day appeared to be teenagers, although the earlier, more-coordinated violence was largely carried out by men in their 20s and 30s.

“Now maybe the politicians come to their senses,” E.G. said, when asked what he hoped violence might achieve, “I think it will have an effect, same as the protest for Serbia’s dog who called mothers of Gjakova ‘savages.’”

He was making reference to protests in January 2015 which led to the dismissal of Aleksandar Jablanovic, a Kosovo Serb minister serving as part of the current government. He incurred the ire of many Kosovo Albanians when he made derogatory remarks about protesters in the town of Gjakova. 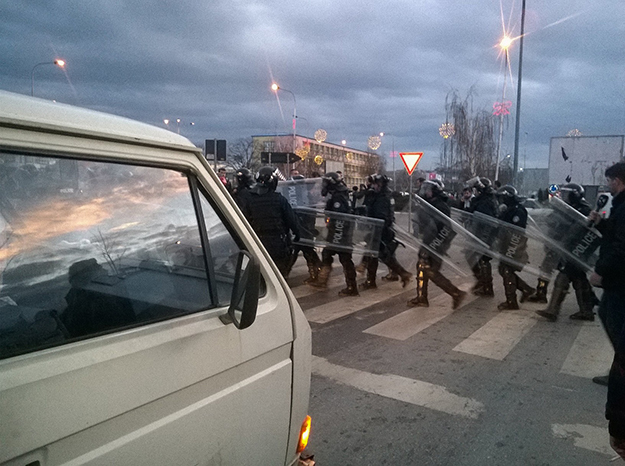 E.G. said that his parents were not aware he had come to Prishtina to join the protest called by the parliamentary opposition. He told Kosovo 2.0 that he travels to Prishtina independently of any group or political party and advises his friends not to attend with him, “because they might get hurt and beaten by the police.”

Estimates vary widely as to the number of people who attended Saturday’s protest, the largest in Prishtina since the 1990s. All 600 meters of Mother Theresa Boulevard, Prishtina’s main pedestrian street, was filled with people. The majority of these thousands of people did not engage in any form of violence.

Police spokesperson Baki Kelani told a press conference his colleagues had counted 8,000. In a statement that day, opposition party Vetevendosje said it believed 100,000 had answered the opposition’s call to the streets. Another figure, which has been gaining traction comes from amateur geometrician Levent Kasemi, who calculated 42,805, “approximately.” 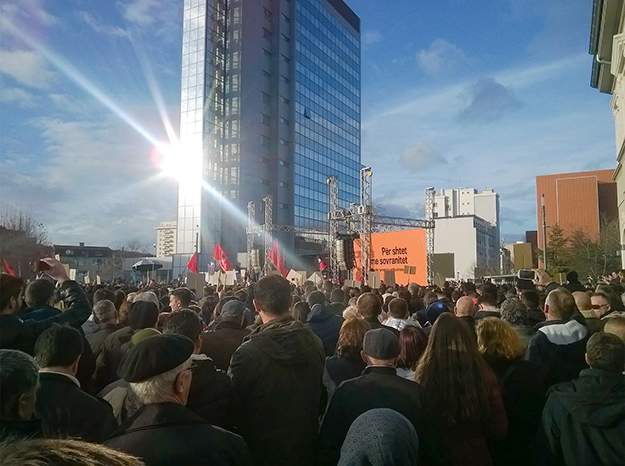 The crowd presented a full spectrum of Kosovo Albanian demography, young and old, women, men and children, in contrast to recent protests which have predominantly tended to attract regular party activists. The protest took place in the context of mass unemployment, widespread corruption, a stagnant economy and a population entrapped by the harshest visa requirements for foreign travel in the region. Many of those present held placards reading simply “resign.”

The government’s resignation is now the centerpiece of a protest movement which began months ago as an expression of dissatisfaction with agreements signed by the government with their opposite numbers in Belgrade and Podgorica. The former would establish a semi-autonomous Association of Serb Majority Municipalities (commonly referred to by the Serbian word for community, “Zajednica”) within Kosovo, the latter demarcates the border with Montenegro.

When the government made clear its resolve to press ahead with the agreements, the opposition moved to prevent their passage into law. For months now, opposition deputies have been disrupting parliamentary sessions with tear gas, leading to the arrest of thirteen of those who were allegedly responsible. Vetevendosje founder Albin Kurti’s arrest was the culmination of a SWAT-style raid on his party headquarters, which wasnoted with concern by human rights organization Amnesty International.

The government’s determination to honor its agreements with Serbia and with Montenegro has been widely praised by the international community, who played a key role in their negotiation. Both the government and foreign embassies were quick to condemn Saturday’s protests as “undemocratic.”

A statement issued by the government on Saturday evening denounced the opposition as the “desperate losers of all elections in Kosovo” who are now attempting to “accomplish their political ambitions by burning the legitimate institutions and causing the country to descend into crime and anarchy.”

“Crime and anarchy” was a reference to the breakaway group of protesters engaging in violent disobedience, including the throwing of fireworks, stones and petrol bombs, some of which caused the government building to catch fire for a short while. 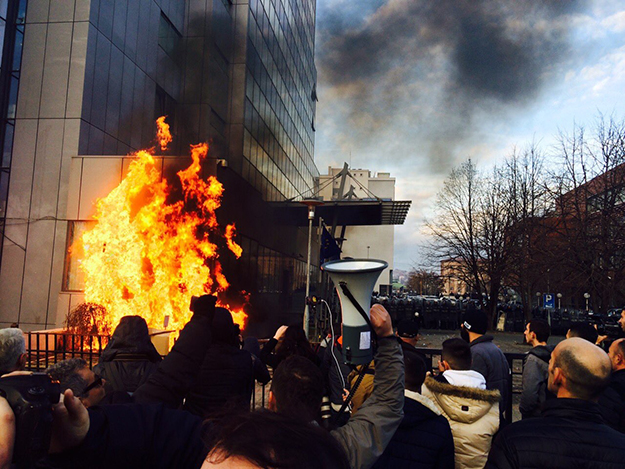 Kosovo 2.0 met traffic police officer Arben Haradinaj in the back of an ambulance opposite Mother Theresa Cathedral. Paramedics were bandaging his hand when he spoke of how seven or eight men in their late 20s attacked him. He said they punched repeatedly, eventually causing him to fall to the floor where he sustained injuries to his head and left hand.

Speaking to Kosovo 2.0, Vetevendosje spokesperson Frasher Krasniqi explicitly denied that his party bore any responsibility for violence during the day. “We went there to protest peacefully and we went away when the speeches [of opposition party leaders] ended,” he said.

The government statement dismissed such denials as “for appearances only.” It went on to offer “deep recognition” for citizens that did not take to the streets.

Echoing statements from all three opposition bloc members, Krasniqi described Saturday’s violence as, “a result of the government’s persistence to continue with their anti-constitutional agreements.”

Trapped on a cul-de-sac with police firing tear gas at its end and rock-hurling youths within it, a Kosovo 2.0 reporter was offered shelter in the apartment of a family of such citizens recognized in the government’s statement. Inside, approximately eight family members were gathered in the living room, watching events outside their window unfurl on the television. The reporter was led by a middle-aged woman to a bedroom window looking out over Mother Theresa Boulevard. She opened the window and the sour odour of tear gas quickly entered the room. “It’s very bad,” she said, “It’s very bad, but the protest is good.”

Later in the day, during clashes between police and young people in the neighborhood of Ulpiana, a woman asked another Kosovo 2.0 reporter, “Why don’t [the police] go to Mitrovica?” She went on to express dismay at the number of children taking part in the clashes.

Mitrovica is ethnically divided, with its southern half predominantly inhabited by Albanians. The population of northern Mitrovica is mostly Serb, many of whom reject the legitimacy of the government in Prishtina. According to research conducted by NGO Aktiv, 43 percent of Kosovo Serbs do not support the participation of Serbs in Kosovo institutions.

The manifestation of these attitudes has frequently made the north of Kosovo difficult to police. On November 18, 2015, Minister of Finance Avdullah Hoti was blocked by Kosovo Serbs during an attempted visit to Kosovo’s northern border with Serbia. According to media reports, Kosovo police was not prepared to clear the road, forcing the minister to cancel his trip.

Another 15-year-old from Prishtina told Kosovo 2.0 that he was protesting, “Against thievery, to overthrow [the government]. AndZajednica will not pass, because they are Serbs and we are Albanians and we don’t like them because they have committed bad things here.”

The “Zajednica” and demarcation agreements are viewed by many Kosovars as the latest in a succession of perceived failures on the part of their government to protect Kosovo’s sovereignty. Belgrade is unwilling to recognise Kosovo’s independence nor acknowledge what is widely regarded in Kosovo as its responsibility for atrocities committed during the 1990s. These two issues are emotionally and historically charged for Kosovo Albanians. Those who oppose “Zajednica” interpret it as lending legitimacy to Belgrade’s interference in the affairs of their state, and as such infringing upon its sovereignty.

E.G., the 15-year-old from Peja, perhaps summarised this sentiment best when he said, “I go out for this soil that they are giving to Serbs, same as Mitrovica.”

Shortly after sunset, order was restored to the city and street cleaners began the task of clearing away the debris, much of which was sodden by police water cannon earlier in the day. An eery stillness had fallen across the city. Bars were half deserted and in the absence of the usual Saturday-night revellers, blackbirds could be heard singing over Prishtina.K