Around 100 Kosovar women’s rights activists and other citizens marched through Prishtina today to mark the International Day for the Elimination of Violence Against Women. Initiated by Kosovo Women’s Network (KWN), the march entitled, “No More Excuses,” is organized within the international 16 Days of Activism against Gender-Based Violence campaign, which runs annually from November 25 to December 10 — Human Rights Day. The worldwide UN campaign aims to raise awareness that women all around the world are subject to rape, domestic violence, sexual harassment and other forms of violence.

Activists holding signs with quotes from people who have survived gender-based violence walked from Zahir Pajaziti Square down Mother Teresa Boulevard before stopping in front of the government building in Skanderbeg Square. They tied their signs in the form of an installation to the fences surrounding the government building, appealing to Kosovar institutions to address gender-based violence. Former president of Kosovo, Atifete Jahjaga, was among those taking part, although there was not a single current political representative, woman or man, participating alongside other activists.

“Today, we went out to march, in order for us all together as Kosovar society to fight all forms of violence that are more pronounced towards girls and women,” KWN’s Adelina Berisha told K2.0. “We didn’t want to have speeches, but we decided through these quotes, and through this research data … to shed light on the problem of violence against women and girls, with the hope that the institution where we placed these banners will take them seriously and treat gender-based violence with the seriousness that they should.” 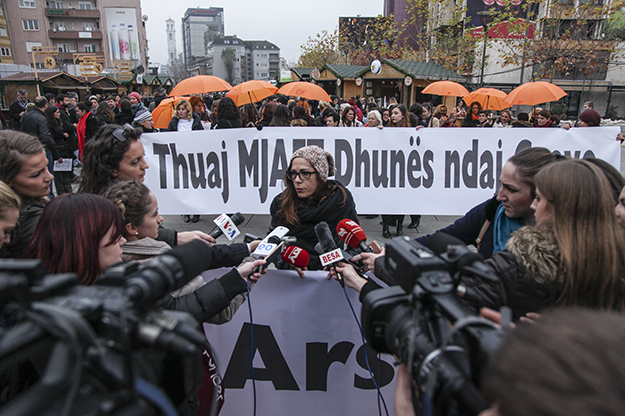 The motto “No More Excuses” was also the title of a 2015 KWN research report that analyzed attitudes, incidents and institutional responses to domestic violence in Kosovo.

“Maybe the most disturbing fact is that in our society violence is accepted and very often many Kosovar citizens aren’t familiar with forms of violence, and hence they don’t know what to do when they are victims of violence,” said Berisha.

Some of the other quotes seen at the march included: “The police closed the case since the person had acquaintances there,” “I do not go out alone because I do not feel safe,” and “The police came. The victim was sent to hospital. The court didn’t react. The process was solved by the family and things went back to normal.” 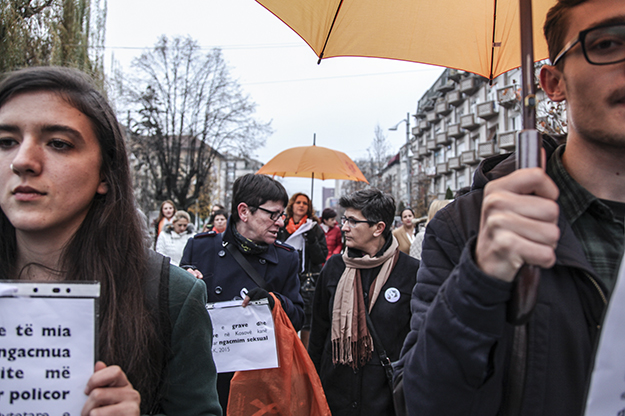 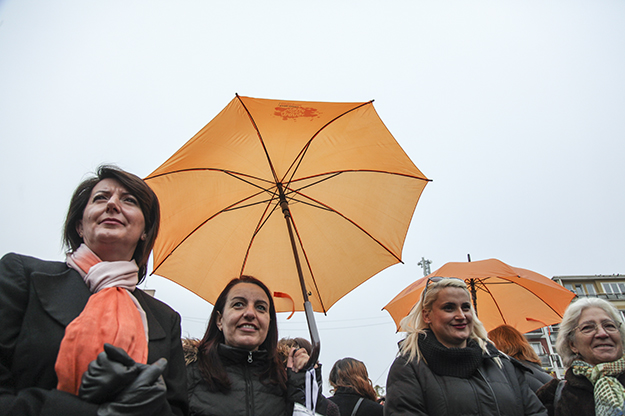 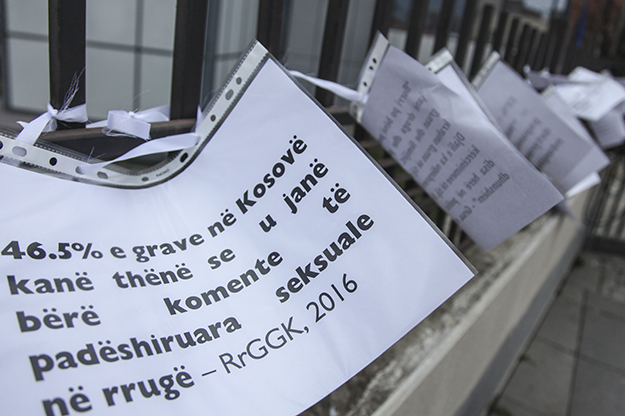 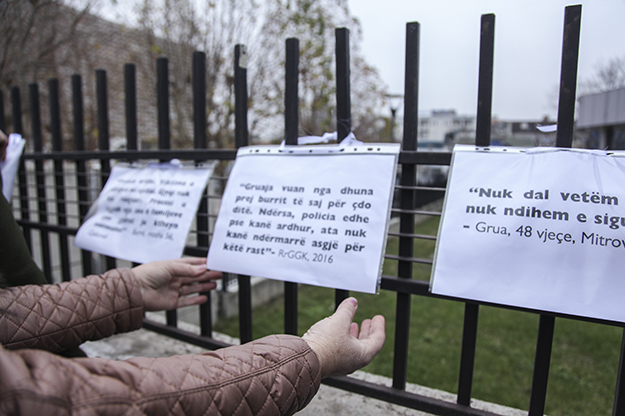 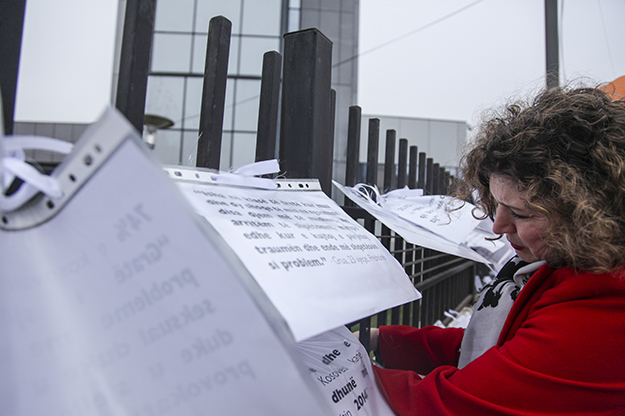 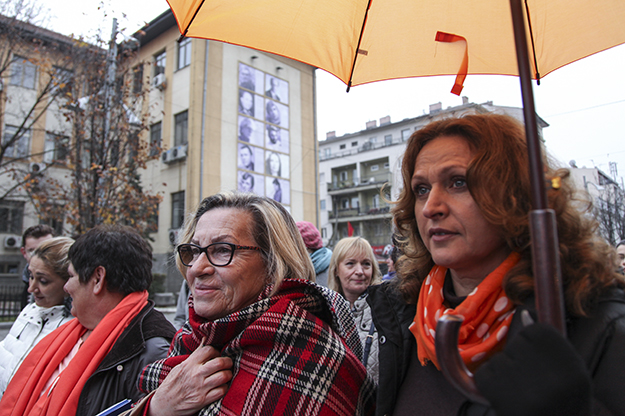 “As seen here [from the signs], there are quotes that the police often closes cases [without solving them], an example that demonstrates that they aren’t doing their work properly,” said Berisha. “It is also disturbing that institutions failed to offer adequate help to victims of violence, either in cases of sexual harassment or in cases of domestic violence. That is why we need to work hard to raise awareness in order to not have such a high percentage of violence in the upcoming years.”

KWN decided to title the report “No More Excuses” after the 2015 murder of Zejnepe Bytyci-Berisha, who was stabbed to death by her husband. The tragedy caused a lot of outrage among Kosovar citizens after Zejnepe’s family claimed that she reported violence against her to authorities 16 times but her requests for help were ignored.

“We were deeply angered by the gossip we heard from representatives of Kosovo institutions, whispering behind closed doors,” the report reads. “‘Maybe she had talked to a man on the phone, which angered her husband’ or ‘maybe she lacked morals.’ We were shocked and saddened by institutions and society continuing to blame the victim of a crime … There are NO EXCUSES for violence.”

Skord Retkoceri, a 20-year-old psychology student was one of the few male participants in the event. He expressed his disappointment that many of his male friends that he had invited hadn’t joined him in the march. 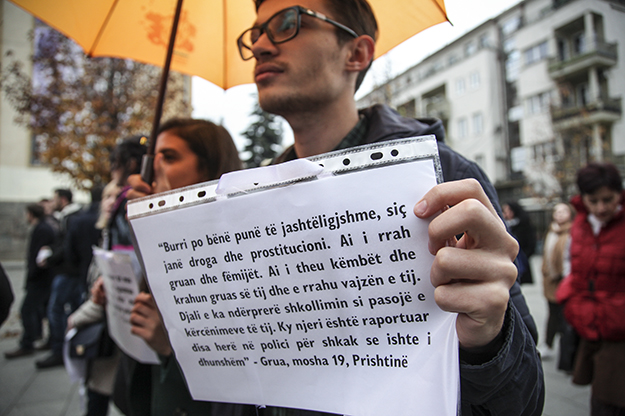 “There is some sort of shame for men and boys to participate in the protest,” Retkoceri told K2.0. “I think that it is the stigma, ‘why are you taking to the street for women?’ Maybe previously it also stopped me from going out [to protest] for some things, but I suppressed that fear and I went out.”

Retkoceri believes that it is very important for women and men to come together in order to fight for better gender equality and human rights in general. “It is important [for all people] to raise their voice about injustices that happen, not just for domestic violence against women, but in general for everything, be it homophobia, sexism or discrimination on an ethnic basis.”

Safete Rogova, one of the most prominent activists on women’s and human rights since the ’90s was also present in the march today, although she also expressed disappointment that the number of protesters had not been higher. 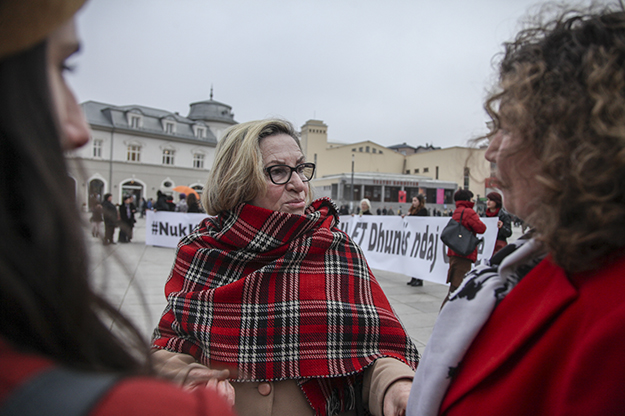 “Even with the flu I felt it necessary to protest, to be together with activists, women, to support each other,” Rogova told K2.0. “With all this work, during all these years that we [have been activists], sometimes we have been discouraged with the situation; like this political situation that is putting a burden on us, that we are left behind … but I still believe in the strength of women and of the women’s movement and we will try to move forward. I believe in the strength of young people and their energy, in their willingness that they will change something, they will do something for the future.”