After the war ends

Reshat Ramadani loads his small bicycle trailer with scraps of metal. As he does, he explains how he goes every day with this bike and looks for different metallic objects around the city. “I collect aluminum, copper, iron and then sell it. I don’t earn more than 3-5 euros a day, but enough to buy some bread when I go home,” he tells RTV 21.

Ramadani is a former Kosovo Liberation Army (KLA) soldier. Talking of his current economic circumstances, he strikes a very pessimistic tone. “It couldn’t be more difficult. I’m tired of it. It would be better that I had died than to live like this,” he says, sitting on a pile of wood in front of his yard, the fence posts of which are engraved with the double-headed eagle, the Albanian national symbol.

Ramadani was working in Germany in 1998 when, as a 40-year-old, he returned to Kosovo, leaving behind a well paid job. In May 1999, he was wounded in the battle of Çabrat, near Gjakova. Two years later, while fighting with the Liberation Army of Presheva, Medvegja and Bujanoc, a bullet became lodged in his arm. It remains there until this day. 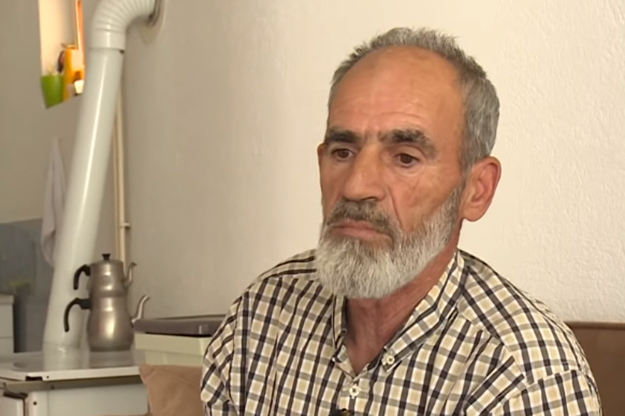 Veteran Reshat Ramadani has been forced to move between 17 homes in the years since the war, often evicted due to being unable to pay rent. Photo: Screenshot from RTV21 documentary.

“To date, I have rented 17 homes,” he says, demonstrating that there were cases when landlords evicted him because he had no money to pay rent. “It was snowing, and from the cold both my wife and my baby girl got sick. Today my wife is lying in bed, sick, and from selling cans I have to buy her medicines that too often cost up to 20 euros.”

A similar situation faces many other KLA veterans who, besides the psychosocial traumas inherited from the horror of the war, are also faced with severe economic conditions. According to data published in March 2017 by the Council for the Protection of the Rights of KLA Veterans, 48 former KLA soldiers have committed suicide since the end of the war due to difficult economic and social circumstances. At the time, Xhevdet Qeriqi, the chairman of the Council, stated that “this is the biggest shame of this state.”

However, while Reshat Ramadani and other genuine veterans have struggled financially, it has been suggested that potentially tens of thousands of people have been fraudulently claiming pensions dedicated to KLA veterans, allegedly costing the Kosovar state tens of millions of euros.

The ongoing scandal around veterans lists has dragged in high profile figures from both the political and judicial world and caused the Kosovo government to be rebuked by both the International Monetary Fund (IMF) and the European Union.

Naturally, problems and disagreements on provisions for war veterans were not born in Kosovo. Other countries that go through the transition that follows armed conflicts have also undergone the same concerns. If we take a look at Kosovo’s neighbors in the region, the states that have been in wars have all experienced issues trying to find a fair and manageable way to care for their veterans.

As with Kosovo, both Croatia and Bosnia and Herzegovina (BiH) have undergone recent controversies over inflating veterans lists and spiralling welfare bills, causing incidents with international organizations.

Back in 1996, after the military phase of the Croatian War of Independence had ended, the new state’s first president Franjo Tuđman expressed the gratitude of the nation to their military in a speech to the Parliament, in which he also mentioned that Croatia had 336,000 veterans.

Being registered as a veteran allows Croatian citizens a range of benefits, including the possibility for early retirement as well as higher pension payments. In April 2016, the average pension of war veterans stood at 5,085 kuna (nearly 688 euros) per month, while regular pensions averaged out to just 2,245 kuna (around 304 euros) per month. At that time, over 4,500 veterans were receiving more than 8,000 kuna (1,082 euros) per month.

In 2016, 72,200 people were receiving a veterans pension, with that number set to increase as more and more registered veterans retire. In November 2017, new legislation was passed that reopened the possibility to register as war veteran, reduced the retirement age, and extended the rights of family members to inherit veterans’ pensions.

In a European Commission report on the country published earlier this year, Croatia’s welfare system was described as being hindered by a failure to target those most in need while benefiting “privileged categories,” with war veterans explicitly named.

The death of Nevenka Topalušić (far left) during a protest over provisions for veterans in Croatia in 2014 deepened the resolve of the protesters who continued demonstrations for 18 months. Photo: Creative Commons.

But while some are focussing on the increasing costs of providing for war veterans, there have also been protests in recent years criticizing the Croatian state’s failure to provide a duty of care to former soldiers. In October 2014, hundreds of disabled ex-soldiers rallied to demand improved benefits and the resignation of then minister for veterans’ affairs, Predrag Matić.

The protests intensified after the death during the demonstration of 60-year-old Nevenka Topalušić, who was seriously wounded in the Croatian War of Independence; actions eventually ended 18 months later in April 2016. Throughout its course, the veterans’ protest was accused of being heavily politicized, with a counter protest even being organized by the Occupy Croatia movement in March 2015.

More recently, provisions for veterans suffering from post-traumatic stress disorder were put in the spotlight, after a former soldier set fire to his house in the south of the country.

BiH has also experienced issues providing welfare for a huge number of veterans. According to a 2017 paper authored by Nikolina Obradović from Mostar University, during the Bosnian War more than 425,000 people, mostly men, were mobilized into different military forces, organized mainly on ethnic and political grounds.

While casualties in the war were severe, in 2000 there were still over 202,000 direct beneficiaries of current veterans’ programs in the two entities of the country. If one considers extended family members, this means at least one-third of the population is directly affected by veterans’ issues. Politically, it is a powerful and well organized lobby group.

This leads to an expensive bill for the state. Obradović emphasizes that in the Federation of Bosnia and Herzegovina, spending on war veterans equates to approximately two-thirds of all non-contributory benefits — i.e those which are financed from entity, cantonal and municipal budgets and are not paid into by citizens. 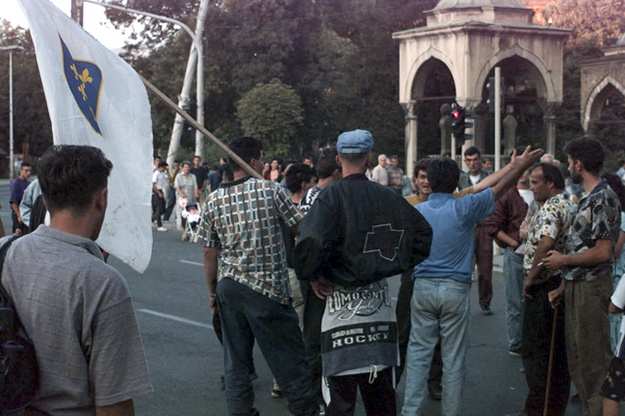 Veterans groups in Bosnia and Herzegovina have frequently taken to the streets to ensure greater benefits for their members, with 2018 being a particularly busy year. Photo: Creative Commons.

This year, provisions for war veterans have caused dramatic political ruptions in BiH. In March, Bosniak and Bosnian Croat war veterans blocked the main junctions throughout Bosnia’s Muslim-Croat Federation, including near the capital, Sarajevo, seeking greater benefits for unemployed former soldiers and a unified register of all veterans that would help eradicate false claimants.

The protesting veterans called on lawmakers to respond to their demands for 326 Bosnian marks (around 163 euros) a month in benefits for unemployed veterans and for every former soldier to get at least 2 Bosnian marks (roughly 1 euro) for each month they served during wartime.

After the Bosniak-Croat Federation approved legislation that increased benefits to veterans in July, the following month the IMF suspended the payment of part of a loan agreed between the international organization and the Bosnian state, citing concerns over financial stability. The IMF’s representative in the country, Francisco Parodi told local television station N1 TV that some estimates costed the program at “several hundred million marks,” which would “completely disable” finances in the Federation.

Ignored by the law

Veterans in Serbia and Macedonia, however, face quite different issues, as neither state has legislation designed to support citizens that fought in the conflicts of the late ’90s and early 2000s. In both countries, violent incidents involving veterans have led to a push for such legislation to be created.

In November 2014, a 40-year-old professional soldier and veteran committed suicide in the village of Zletovo in eastern Macedonia. He was suspected of killing his wife’s parents and another person with an automatic rifle earlier that day. The incident followed another former soldier being detained on suspicion of a triple murder, and another ex-serviceman committing suicide in the previous weeks.

At the time, Balkan Insight reported that war veterans associations (of which there are 15 active with around 30,000 estimated members) estimated that at least 30 Macedonian veterans had committed suicide, while at least 10 more had committed murders since the end of the 2001 conflict.

Meanwhile in Serbia, in March 2018, a Serbian Army soldier threatened to blow himself up in front of the parliament building in Belgrade. Reports said that the man had a pistol and a hand grenade but surrendered after talking with police.

It was the latest in a string of events that had included both former and current soldiers committing suicide, as well as threats of doing so in front of Serbian institutions. After the latest incident in March, head of the Serbian Veterans Association, Željko Vukelić, spoke of the urgent need for a law on veterans.

Vukelic had passionately spoken to the Guardian five years previously on conditions for veterans in Serbia, comparing his fight against the Serbian state for veterans to receive overdue wages and their entitled benefits to the armed conflict in which he participated in Krajina. The article goes on to make the suggestion that Serbia’s veterans struggle more compared to others in the region due to both local and international perceptions of Serbian soldiers.

Serbia, for instance, considers the only ‘war’ of the ’90s to be NATO’s military intervention in the Kosovo conflict, with others conflicts described as ‘insurrections’ or ‘military exercises.’ A lawyer who defended Serbian leaders on war crimes charges told the Guardian that a settlement with the former soldiers might play badly in Western capitals, where it might be seen as a tacit acceptance of involvement in the Balkan wars.

A lack of political expediency is also often cited for the lack of legislation in Macedonia. In October 2012, a veterans’ bill was handed over by VMRO-DPMNE, but its Albanian coalition party, the Democratic Union for Integration (formed after the 2001 conflict, with National Liberation Army leader Ali Ahmeti becoming the party’s president), refused to back it, arguing that the law should not be adopted because it was biased and did not include all participants in the 2001 conflict.

The rejection from the Democratic Union for Integration has left legislation over veterans in something of a political limbo, with Macedonian political parties seemingly reluctant to suggest provisions for those seen as insurrectionists. Meanwhile, fallout from both the wiretaps scandal and the deal with Greece over an official name change have left the political agenda dominated by these issues.K