Alberta Troni: “We can see how thirsty the youth of Kosovo are for classical music” - Kosovo 2.0
One-on-one | Culture

Alberta Troni: “We can see how thirsty the youth of Kosovo are for classical music”

Ahead of their duet at Prishtina’s Chopin Piano Fest, pianist Alberta Troni and cellist Karel Bredenhorst discuss the universal language of music.

Tonight, from 20:00, the eighth edition of Chopin Piano Fest continues in Prishtina with a very special concert, a duet between two renowned musicians; pianist Alberta Troni from Kosovo and Dutch cellist Karel Bredenhorst.

Bredenhorst performs as both a soloist and chamber musician, and has played all over the world from Brazil to the U.S. and Europe to Nepal. He has even made previous appearances in Kosovo. Alberta Troni meanwhile, is an associate professor at the University of Prishtina’s Musical Art branch, and has also graced stages across Europe and beyond. The duet captures one of the main goals of the festival, to unite local and international musicians. 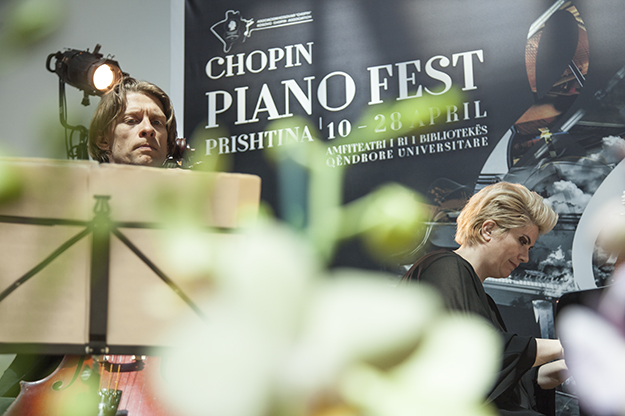 Troni and Bredenhorst will perform pieces from composers such as Alexander Scriabin, Richard Strauss, Gabriel Faure, and Rauf Dhomi a Kosovar classical music composer, conductor and professor at the University of Prishtina. The concert will start with pieces from two renowned German composers: Robert Schumann’s “Fantasy Opera 73” and Johannes Brahms’ “Sonata for Piano & Cello Op. 38.”

Brahms once said of his sonata that the piano “should be a partner, often a leading, often a watchful and considerate partner, but it should under no circumstances assume a purely accompanying role.”

Watching Troni and Bredenhorst preparing for tonight’s concert, it is obvious that no one will be leading, but instead that they will together lead the public into an evening of classical music, which will take place at the new Amphitheatre at the National Library.

During these preparations, K2.0 met up with Troni and Bredenhorst for a short interview. 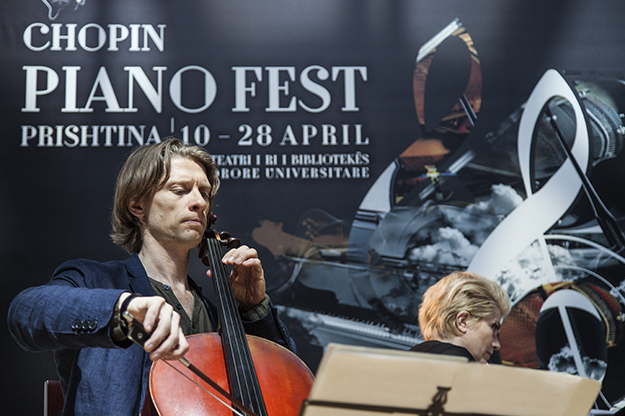 K2.0: Karel, your travels have taken you around the world and this is not even your first time here. What struck you most when you visited Kosovo?

Karel Bredenhorst: This is my third time in Kosovo. I was first here in the summer of 2015 for the European Summer Music Academy festival. That was my first time in country, and was a wonderful experience for me — to meet open people who really want to learn, especially young people. There is [often] less opportunity to learn about classical music [these days], especially with YouTube and cheap music downloading so it was very nice to see that everybody was so eager to learn. It was very nice for me to be able to give input about music, and to light the fire in their soul, so to speak, to inspire in them a love for music.

There is a lot of interest in classical music here. [Kosovars] come and ask you questions, are open, communicative. They are people who are trying to build up their communities, and to create. For example, the Chopin Festival — it’s not easy, especially in these conditions, to organize it, and to bring people from abroad but still, lots of people put lots of energy into it, which is wonderful and one of the first things I noticed when I came here. Everybody is working for their future. 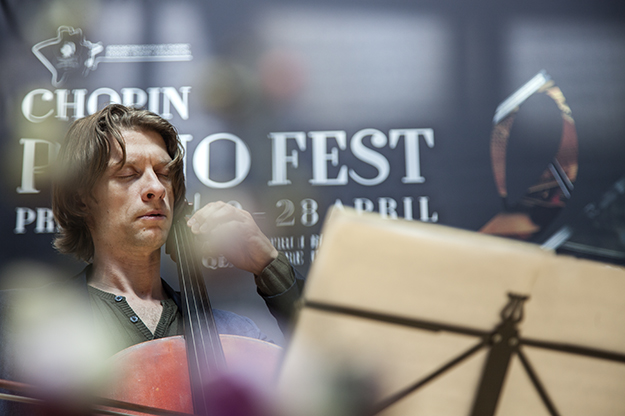 This is your very first cooperation with Alberta Troni. Both of you are accomplished musicians, so what does this cooperation mean for you?

KB: We met each other in 2015, when she was also a professor with the Summer Academy, so we had already talked about the opportunity to do something together. It sounds a bit cheesy, but it is true, music is a universal language and can connect a lot of people. Even if we wouldn’t be able to speak, which in this case is not so because Alberta speaks excellent English, but still we would be able to play.

This cooperation for us is a very beautiful moment, and I look forward to it. Here, so many people come to concerts like this, young people. In Holland it is not always like this, so you can see people really want to feed themselves with music. I also like hip hop. I like everything. I listen to it, and it is all the same for me. So it is really good that young people take this step and come and listen to it.

Are you saying that even if you like hip hop and more mainstream music, there is no reason for young people to not also enjoy classical music? 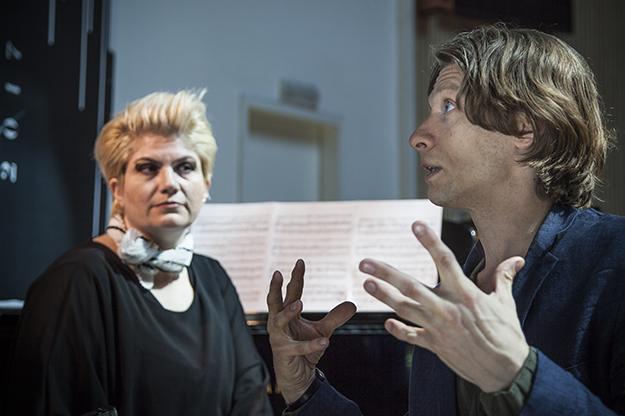 Alberta, I believe it was you who first thought of making this concert happen. How did the process go, and what does this cooperation mean for you?

Alberta Troni: It is a great pleasure for me to make this joint concert with Karel happen. We met in 2015 as Karol said. Ever since then I have thought of performing in a concert with him. When I invited him I did not know his agenda, which is usually very busy, but he responded very positively to my invitation. Soon afterwards we started our preparations on the material which we will interpret.

Karel mentioned that he thinks more and more young people are becoming interested in classical music in Kosovo. As you live and work here as a professor, what is your opinion on that?

AT: Well yes, referring to the public at least, there is a really nice trend that has started to move forward with quite fast steps. Since the monthly concerts of the Philharmonic have started — honestly the hall is not large enough for all the people that want to get in. Now the festivals have started to attract a similar audience as well.

We can see here how thirsty the youth of Prishtina and Kosovo are, and how much this city needs to offer events and cultural activities, because otherwise we do not have much to take from Prishtina.

I think that the festivals have now become key events, that lovers of this kind of music await with eagerness. Honestly every evening our halls are full of people; in Dam Fest which has recently ended, and now in Chopin Piano Fest, where on the first day the hall was full with fans.

Your career has taken you to music events all around the world and to prestigious music schools, including in Italy. What is your opinion on Kosovo’s music educational system — both pros and cons?

AT: I think that our Academy, the Faculty of Arts, offers quite a qualitative teaching method. It has accredited curricula with European standards, and the staff have all proven themselves in their proper fields.

What is maybe lacking is a larger and wider infrastructure. The instruments have been there for 20 or 30 years — since the founding of the faculty. So I think that maybe we should receive a larger budget so our faculty can posses the best instruments. But I think that the quality of education is not lacking, and there are also lots of students interested in following studies in this field. 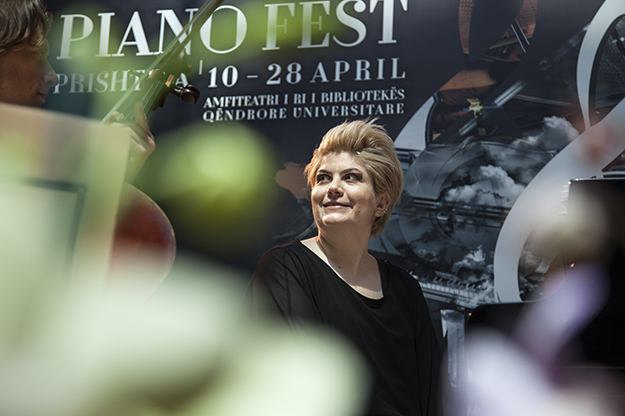 Could you tell us about the novelties, what is special about this festival?

AT: Chopin Piano Fest has always intended to highlight piano music, but also all instrumental music. We have always invited a range of instrumentalists, as well as pianists and singers, often from abroad. What really identifies this festival though, is its final concert with the Kosovo Philharmonic, where two pianists are always presented, one local and one international. Also, other than the concerts that are on the program, there are concerts from students, including both young and prizewinning students.

Finally, Karel, what would you say to people that are considering attending this concert? Why should they come?

KB: (Laughs) I think they should come because it is a unique opportunity to come and share a really special moment with us. A meeting of two international musicians, from very different parts of the world, creating a very varied program that will be attractive for every taste, I’m sure of that.

This conversation has been edited for length and clarity. The interviews were conducted in English and Albanian.