Alina Fazliu’s received the jury’s special mention at the 2016 Kosovo Slam Poetry Festival for her poem on domestic violence.

Prishtina once again hosted the Kosovo Slam Poetry festival in December, the second time that Kosovo’s youngsters have been provided the space to express their struggles and social issues through their original verses. Organized by alumni from the YES youth exchange and study program, the festival brought together 13 finalists — chosen from a total of 25 applications — aged 15 to 25 to perform their poems in front of a full house at the American School of Kosovo amphitheater.

The aim of the festival is to address current societal problems through poetry, with entrants from both Kosovo and Albania using verse to answer the question, “What is the issue in your country that keeps you awake at night?” Topics chosen by entrants ranged from homophobia and sexual harassment to love and identity. The jury, composed of writer and journalist Arber Selmani, Peace Corps volunteer Kate Wallner and K2.0 staff writer Dafina Halili, selected the top three poems and also gave one special mention.

K2.0 is publishing all the winning poems, starting with Alina Fazliu’s poem on domestic violence, which gained the special mention. 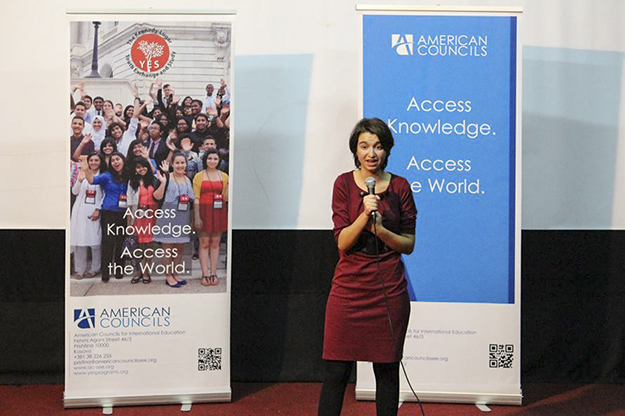 From my throat escapes a scream,
My hair tightened in his grip,
Hoping this is just a dream,
And trying from his hands to slip.

He punches me in my face,
My eyesight blackening once more,
I can’t move from my place,
As I spit blood on the floor.

Angry and furious he walks away,
And my blood blends with tears,
Still on the ground I stay,
Trying to overcome my fears.

My lip is bleeding even more,
As pain flows through me,
I reach for the bathroom door,
And myself in the mirror I see.

Face swollen, eye black,
I look no better than dead,
All caused from his whack,
Because again he was mad.

I hear his footsteps then,
He’s quickly coming to me,
Fear hits me once again,
As his figure at the door I see.

He is calm and contrite now,
As he says it won’t happen again,
He has just felt low,
And hasn’t acted like a man.

Pleading from me to forgive him,
Like he has done other times,
He carefully lifts my chin,
Thinking that forgiveness cleanses his crimes.

All I do is slowly nod,
Again swallowing my pride,
He now swears to God,
That this was the last time I cried.

I am helpless and slowly dying,
Everyday facing the same thing,
Each second more terrifying,
Because I can’t do anything.

Having nowhere else to escape,
I am forced this nightmare to endure,
Hittings, beating and rape,
To me are not obscure.

I have long ago accepted my destiny,
Like many more females just like me,
Who live in this wrecked society,
Who live everyday through misery.