The art of Andrra: a method for tackling gender discrimination.

At midnight on Aug 6, as part of DokuFest in Prizren, Fatime Kosumi, also known as Andrra, brought Palina back to life. Palina is a 14 year old girl who was married off by her family. She is also the protagonist of an old Ulqin folk song, and the epicenter of Andrra’s single, “Kalle Llamen” (Turn on the Light), which was released in January and focuses on the pan-Albanian phenomenon of marrying off girls.

In May 2014, Fatime travelled throughout Kosovo searching for rhapsodic songs that are sung by women in rural areas. This journey also resulted in the making of the short documentary “Kenge e Defa” (Songs and Tambourines) and led her to encounter kanagjeq songs, which are sung to women on their final evening before being married.

In an interview with K2.0 in January 2017, Fatime spoke about how difficult it was to find these kanagjeq songs. Though a considerable proportion of them were collected through texts written by Anton Ceta, the music or sound that accompanied these texts were unknown. They were lyrical narrations, which made their translation into modern songs all the more challenging.

The art of Andrra is deeply political, but above all it is personal, as is everything when you are a girl or a woman. The whole world is personal when you are identified as “the second sex.”

There is a human defence mechanism for projecting violence as a phenomenon that happens to “others,” “somewhere,” wherever we aren’t, when in fact, violence is well-structured and occurs daily right under our noses.

Fatime shows just how personal her work is, even for herself. She does not hesitate to share her family history with the public. The singer’s mother was a victim of a system which forced her to get engaged at the age of 14, and marry at 16. By giving a voice to the girls that are mentioned in these texts, she also simultaneously gives a voice to her own mother.

Such events, rather than gaining public weight, burden those that experience these phenomena directly. Violence is conveyed in one way or another, and it leaves marks. It is a soul ache more than a social drama, but as it reaches the level of public discourse, it disallows evil to go on further unrestrained, and simultaneously reminds each and every person that they are not alone.

There is a human defence mechanism for projecting violence as a phenomenon that happens to “others,” “somewhere,” wherever we aren’t, when in fact, violence is well-structured and occurs daily right under our noses — from the most developed cities to the most remote villages. Claiming that violence doesn’t exist does not undo it, rather it only empowers it further.

The actual and historical reality that these texts convey is displayed free of national sentimentalism. What is unique about Andrra’s art is the fact that its use of folklore and tradition does not fall into the trap of worshiping cultural heritage, and covering that heritage with the veil of nationalism so as to show a false identity, as is often the case. Andrra uses songs wisely, as a tool, to get to the heart of Balkan (specifically, Albanian and Kosovar) patriarchy, and to tackle this system. 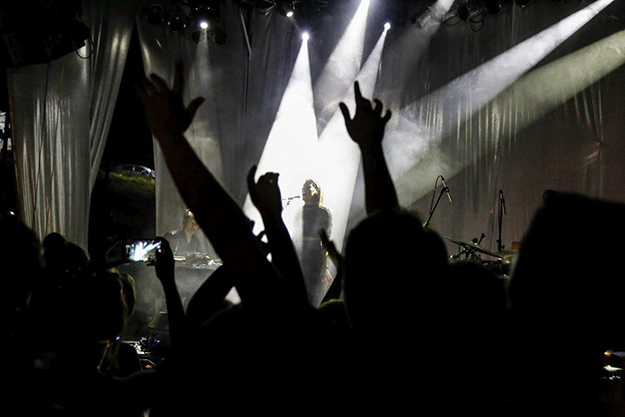 Andrra’s sounds are a reflection and a call for revolt for all girls and women whose daily lives are still conditioned by this reality and these traditions. Unlike the cultural elements of Albanian tradition which are displayed visually in video clips through traditional costumes, dances and customs, the spirit through which Andrra makes her art goes beyond Albanian and Kosovar borders. It touches every girl who has experienced legitimized pedophillia through the institution of marriage, has had violence sold to her as a value and submission as a virtue, and has had a psychosocial prison presented to her as a incontrovertible rule or norm.

The pop-folk music you hear in Andrra’s work dates back to the West in the mid 20th century, when a new form of traditional folk music picked up pace and reached its peak in the ‘60s. This musical typology included within itself new genres like folk rock, folk metal, electric folk etc. Some types of this folk music, considered as world music, include different categories of ethnic or neo traditional music, interwoven with Western pop music.

This union of the traditional and the modern is a clear language for communicating with the Kosovar and Albanian public, despite the fact that our society is in limbo, stuck between the past and the desire for the future, between archaic traditions and modern social norms. Andrra speaks to the public in its own language, but carefully disallows the latter to fall into unnecessary and damaging exoticisms.

Andrra’s approach to the society she comes from is critical, however she doesn’t put down the culture that has seasoned her. She knows how to distinguish elements that contribute to Albanian cultural richness. Furthermore, she uses those elements to oppose ignorance and backwardness.

“Vallja e Ushtarit” (the Soldier’s Dance) and “Vallja e Clirimit” (the Liberation Dance), another old dance with origins in Tetovo, are performed mainly by men and are related to liberation from Ottoman rule. However, Andrra embraces them to present the idea of liberation from patriarchal traditions.

An example of this is the traditional costumes of Zymi i Hasit, which are worn by the head of the ‘Katarina Josipi ethno-cultural ensemble,’ Lajde Kajtazi Kolgjeraj, as well as other women in the Palina music video. Kolgjeraj has a rich collection of national clothing that come from this region, and Fatime does not hesitate to include them in her art.

In the song “Kalle Llamen” the choreography is inspired by two traditional vallja (dances), “Vallja e Ushtarit” (the Soldier’s Dance) and “Vallja e Clirimit” (the Liberation Dance), another old dance with origins in Tetovo, that are performed mainly by men and are related to liberation from Ottoman rule. However, Andrra embraces them to present the idea of liberation from patriarchal traditions.

She makes us understand that living life under the rule of a master is damaging and lethal. It kills all the more brutally when the master is yours, when he lives inside your house, goes to the same school, has the same job, lives in the same street as you, or when he speaks the same language and roams within the borders of the same country as you.

That is not all. This dance symbolically sends the message that girls and women are those who must change reality by taking their fate in their own hands, and that nothing can stop them from changing their current conditions or situation, because women can. They know what is best for themselves. Ultimately, salvation will not come from the sky. It will start with simple questions like: Why like this? Why me? Why here?

At her DokuFest concert, Andrra sang freely on stage, attracting attention towards the power of art and music for displaying such social wounds, and tackling their cause. Simultaneously she reminded us that change is a process that requires time. It comes through songs, articles, protests, shows, comments on social media, from the talent and tools that we all have, so that ultimately, freedom and human dignity are not violated on the basis of gender, sexuality, nationality, or other such characteristics. Because freedom is not just a dream, it is a right.