‘Destroy the old; build the new?’

More than 50 people joined K2.0’s latest Small Talk on Thursday (May 11) evening, on the topic of architectural heritage. Held in the K2.0 garden, the open discussion titled “Destroy the Old, Build the New” covered topics ranging from architecture’s contribution to identity, to who should decide if something has architectural merit.

The talk was moderated by Rron Gjinovci from the Organization for Increasing Quality in Education (ORCA), while three guest panelists helped to get the conversation started. 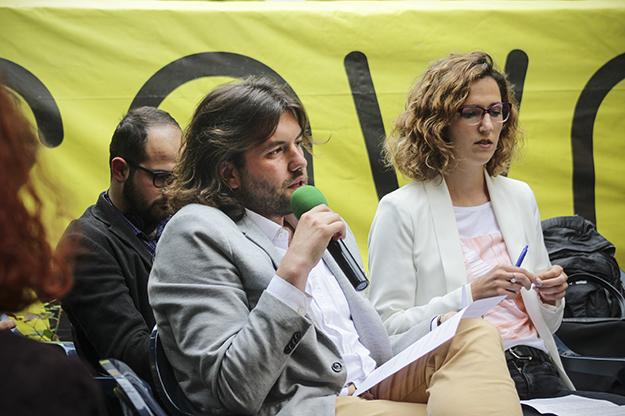 Skender Boshtrakaj, director of the Museum of Kosovo and head of the Department of Integrated Management at the Ministry of Culture spoke first. He initially expressed his support for recent protests by students against changes to the Technical Faculty building of the University of Prishtina, a modernist building designed by renowned architect, Evard Radnikar, who was a student of another famous architect, Le Corbusier. Boshtrakaj drew parallels between this protest and activism in Prizren for preserving the historic Lumbardhi Cinema, saying that both are good examples of attempting to preserve architectural values that are important to a community.

Moving on from this case, Boshtrakaj also spoke about socialist-era buildings, which he referred to as “orphan buildings,” because they are perceived as such by the general public. He argued that Kosovo have left the heritage from this period as orphans, and that efforts must be made to identify who should be responsible for looking after them. This must happen regardless of who the parent of these orphans was, he said, and in what circumstances they were born. According to Boshtrakaj, Kosovars must decide what happens, because society has been left with the responsibility for these orphans.

He went on to explain how the tendency to transform such buildings is a development that has been present throughout human history, but usually a ‘parent’ has shown up to look after these ‘orphans’; however, this has not happened in Kosovo’s case, and the state is the main culprit in this regard, he said. Furthermore, he mentioned cases in which sculptures and buildings of the socialist period have been destroyed throughout Kosovo, transfiguring the spaces in which they were located. 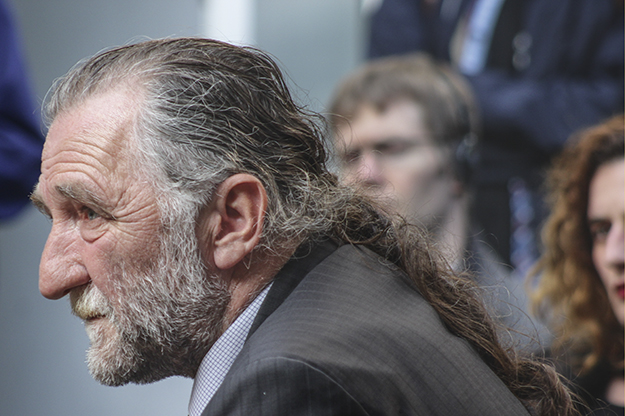 According to Boshtrakaj, this is all a result of a few factors. First of all, he suggested it is a global development, which started with the fall of the Berlin wall, a development that is symbolically associated with the destruction of the socialist bloc in general. In terms of global trends, heritage from this period is also not seen as trendy, and is no longer ‘in,’ and as such all this heritage is left in an orphan state.

Secondly, Boshtrakaj suggested it is an issue related to developments of a local nature, where values start to compete, and new values are superposed; in Kosovo, he argued, a superposition of values has occurred, and all of this has occurred as part of senseless competition.

Eli Krasniqi, social anthropologist and founder/member of Alter Habitus – Institute for Studies in Society and Culture, provided a historical narrative to help bring an understanding of developments that have occurred more recently. In her presentation, which she called “The Memory Of, and Revenge Against, Socialist Buildings,” Krasniqi introduced the context of developments during the socialist period, to provide a platform of understanding where the rejection of socialist cultural heritage by certain social groups stems from.

Krasniqi mentioned a case in Preshevo, Serbia, in 2013 in which Serbian authorities removed the memorial to Liberation Army of Presevo, Medveda and Bujanovac (UCPMB) soldiers, which was followed by the demolition of a World War II partisan memorial in the Kosovar city of Vitia by organizations formed during the Kosovo war. According to those who demolished the partisan memorial, this was done “to show Serbia that we can also destroy all of their historical monuments.” Krasniqi said that this allows us to understand how a part of Kosovar society sees these constructions in terms of ownership; they do not see them as theirs. 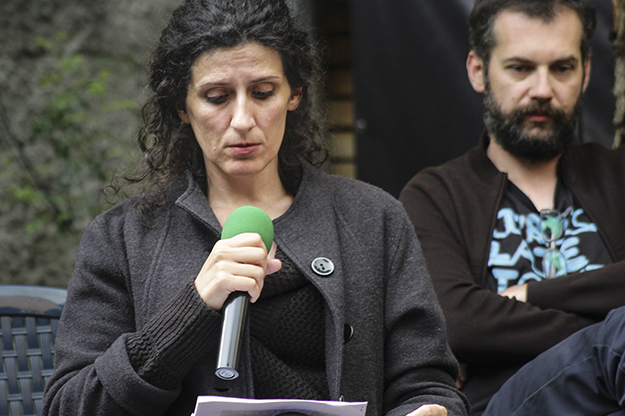 Eli Krasniqi explained that there has been a backlash against socialist-era constructions in Kosovo, that links to issues of identity, ownership and social divisions. Photo: Agan Kosumi / K2.0.

Similar developments have occurred in other cases, like in Prishtina, where an unsuccessful attempt was made to destroy the ‘Brotherhood and Unity’ monument — also known as the Triangle — in 1999 after the war. Krasniqi suggested that we can understand that following the war, the conflict between Serbs and Albanians was transposed to include memorials; she suggested we must also question whether the rejection of buildings of the socialist era is prevalent for similar reasons.

But these developments, Krasniqi explained, bypassed certain regions in Kosovo, with industrialized regions mainly being those with large numbers of Albanian partisans, whereas rural areas were left behind. This separated society into two categories, Krasniqi said: Those who utilized the good side of communism, and the working class. She believes that this separation has extended to recent times, with regard to the perception of socialist era cultural heritage, and that attempts to transfigure that heritage seem like attempts to erase traces of that period.

After Krasniqi’s presentation, Gjinovci emphasized this class dimension to the rejection of cultural heritage from the socialist era, suggesting that this rejection is not just an irrational one but that it also speaks of the social trauma that had been experienced.

The third speaker, Grese Musliu is an architecture student at the University of Prishtina and one of the organizers of the recent protest against changes to the Technical Faculty building. She highlighted the architectural destruction that has taken place in Kosovo, dividing it into two periods: the period of demolishing Ottoman heritage and the destruction of Austro-Hungarian architecture under the motto “Destroy the old, build the new.”

According to Musliu, the same thing is happening today with the destruction of socialist era architecture. She gave the example of the old Rilindja printing house — where the facade has been completely changed without leaving anything from the earlier identity of the building — and said that there have been many other similar examples. Musliu argued that in many cases demolition or renovation has taken place on buildings that, when analyzed against international standards for assessing ‘buildings of cultural value,’ should have been preserved. 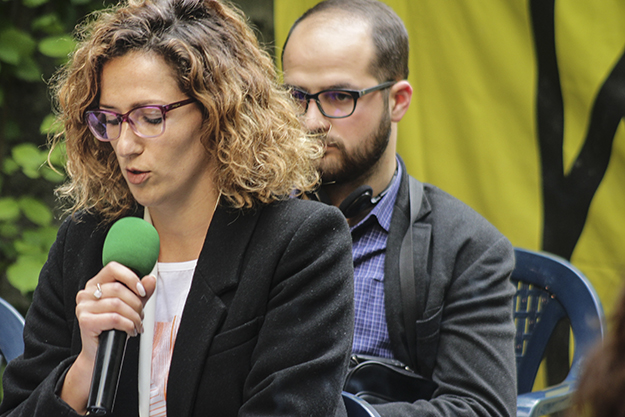 Grese Musliu explained that there is a long history of architecture from previous eras being destroyed in Kosovo, despite the cultural value that these objects have. Photo: Agan Kosumi / K2.0.

The Technical Faculty meets these criteria, she argued, having historical significance as it was built after World War II and has been an identifying sign for the city and that period. Musliu also pointed out that the decision to intervene with the building’s facade was particularly surprising given its architectural aesthetic importance as it was designed by a world renowned architect and was symbolic of the brutalist style and the era of modernism.

Musliu said that the reasons given for the adjustments to the building were that it had poor energy efficiency. However she argued that this is normal in old buildings, which naturally need moderations over time, but that external interventions cannot be made on such a basis. Asked by an audience member whether the building’s facade could be returned to its previous state, Musliu explained that the facade has been irreversibly damaged.

Following the presentations by the guest speakers, many members of the audience took the opportunity to give their own comments and direct questions to the panelists and one another.

One participants noted that buildings designed during the socialist era should not simply be condemned as communist products but suggested that they show a spirit — the brutalist style — that certain architects have followed. This style, according to him, belongs to a certain period used not only in Yugoslavia but also in different countries — not all of them under communism at the time.

Another participant commented on the prevailing narratives that accompany the debate on these issues. She argued that the current establishment tends to exclude other opinions and experiences and believes it has an exclusive monopoly on settings values, which extends to discussions on buildings and architecture. This is particularly so when it comes to discussing the period of former-Yugoslavia, she suggested, as when people have different ideas about buildings and believe that they should be preserved because they represent an important part of societal memory, those people are labelled as ‘Yugo-nostalgic.’

One participant ironically proposed to create a list of buildings, busts and sculptures from the socialist era and to destroy all of them, thereby leaving only ‘purely Albanian buildings or cultural heritage’ in Kosovo: “And then let’s see which buildings remain in our cities.”K