Have you ever felt that you would like not to be judged by your nationality, or ethnicity? Do you wonder what it would feel like to not have to declare this imposed identity, such as, “I’m an Italian,” or “I’m a Chinese,” or “I’m a Kosovar”?

The question of borders is as old as humanity itself, and if you have a Kosovar passport, then you undoubtedly feel the strain of physical borders, and isolation as a result of their existence. But there are other borders as well; borders between urban and rural areas, between the young and the old, or foreigners and locals. Then there are gender-based borders, psychological borders, and even borders between humans and other living species.

It is these type of issues that are the focus of the first edition of Kosovo’s only contemporary art biennale, “Autostrada Biennale,” the official opening of which was on Aug. 19, when media and guests were invited to have an early look around the 30 exhibitions scattered across 12 venues all over the city of Prizren. 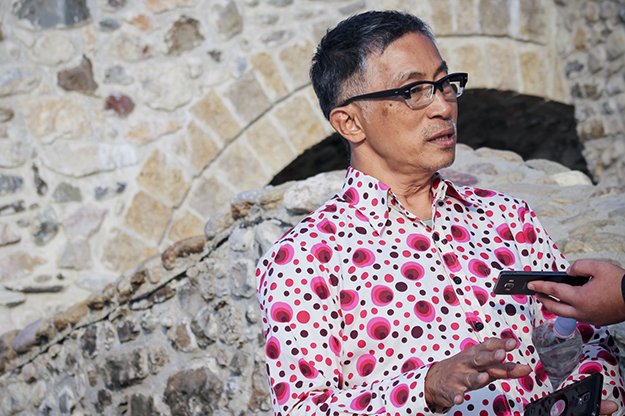 Curating this year’s Autostrada Biennale is Manray Hsu, who has previously curated biennales and other exhibitions in Taiwan, Austria, Germany and Brazil. Photo: Agan Kosumi / K2.0.

This year’s biennale is curated by Manray Hsu, an art critic and independent curator whose intellectual body of work includes numerous curated biennales and exhibitions, as well as directing and teaching in art academies across the world. Hsu’s belief is that the human imagination’s natural inclination is toward breaking borders, and contains the desire “to cross different parts of our brain into outer space, into the other, into different cultures.”

The city of Prizren would seem an ideal location to reflect that cultural and epochal crossing of borders, with its ethnic diversity and mix of history and the contemporary.

The biennale’s first venue is set in the city’s bus station, where upon entrance you are greeted by a “beggar robot” asking you for money, the creation of Saso Sedlacek, a Ljubljana-based artist. The idea behind the robot, built at no cost from old and discarded hardware, was to beg in the name of the poor (the elderly, refugees, the disabled) in areas that are typically off limits for them and frequented by the rich, who are only capable of showing sympathy from a safe distance. According to Sedlacek, anyone could build this robot, and he provides instructions on his website as to how. 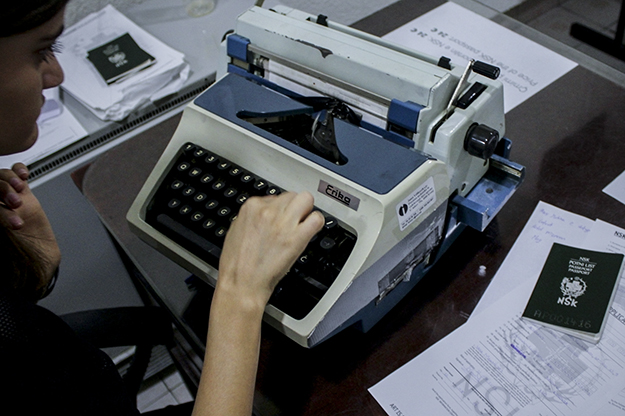 For the next month in Prizren bus station, there is an office where one claim citizenship for the Neue Slowenische Kunst (NSK) state. Photo: Agan Kosumi / K2.0.

After fobbing off the beggar robot, ignoring his “broken heart” and with his longing goodbye of “maybe another time” tugging at your heartstrings, the next stop is the NSK Passport Office, where for 24 euros you can become a member of the NSK State.

“This passport loosens the idea of fixed identity and a fixed nationality,” says Miran Mohar, a member of the IRWIN group, a collective of Slovenian artists, who together with other artistic groups created the state of Neue Slowenische Kunst, after the breakup of Yugoslavia.

Unlike Kosovo and the other ex-Yugoslav states, NSK “is a state without rent, without territory, that only exists in time and the mind, and goes beyond the idea of a nation,” Mohar says. So far it has around 50,000 citizens from around the world.

Mohar recalls an occasion when a Taiwanese citizen joined the state, which gives an insight into how the NSK can help people in their struggles over nationality. The new NSK citizen told Mohar that his new identity “is symbolic, but important for me, because to have the second passport gives me some space. I don’t need to choose between being Chinese or Taiwanese, but I can be a little bit of something else.” 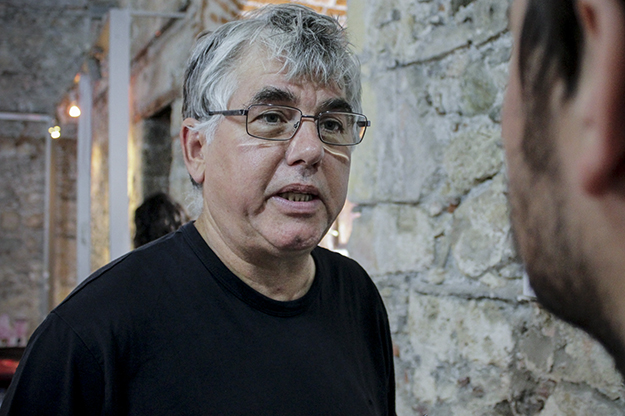 Miran Mohar, who helped build the NSK state, does not recommend using a passport from the country as a travel document. Photo: Agan Kosumi / K2.0.

If you are tired of having to explain to others that you are a Kosovar, or an Albanian, or a member of any other nation, as well as the expectation of being judged accordingly, you now have the option to obtain an NSK passport. Mohar says that people in the west use it for banks, and hotels, but mainly as a collector’s item, while in Africa many use it as their only document, and even travel with it. In addition to the office at Prizren’s bus station, you can also get an NSK passport online, but Mohar does not recommend using it as a travel document “because it is not internationally recognized.”

The bus station also provided the location for a performance by Alketa Xhafa Mripa titled “Waterfalls,” and was chosen as it represents the various means of political control — an arena where large and small-scale politics are brought together.

On the second floor of the building, a pool table was set up with 15 white balls, with the rules being dictated by the ‘power players.’ This scene was interrupted by Xhafa-Mripa, who lay flat on her stomach atop the table, before spitting beyond the borders of the table, “beyond the expression of communication and reconciliation.” This performance will be repeated during the biennale by a number of different female art students. 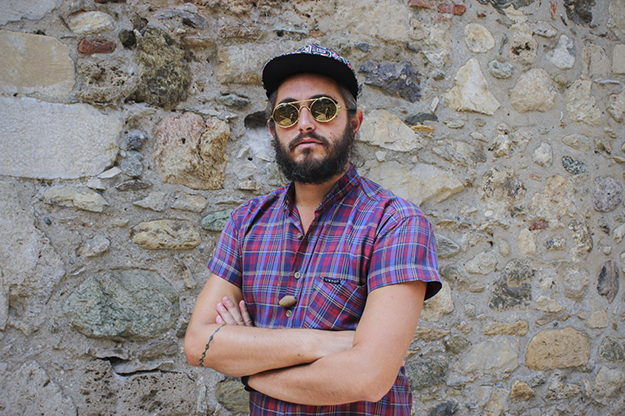 Alban Muja’s “Borders Without Borders” series helps document the shifting nature of borders within the Schengen Area in the wake of the refugee crisis. Photo: Agan Kosumi / K2.0.

The same building also hosts the work of Kosovar contemporary artist Alban Muja, who is participating in Autostrada Biennale  with a photography series, “Borders Without Borders,” a project depicting abandoned buildings at border points in EU states that are members of the Schengen Area.

“From the time that free movement became reality for the people of Europe, these buildings have remained empty,” says Muja. However, the recent wave of refugees have seen these buildings occasionally restored to their prior function. “Often these buildings become temporary border points again, maybe with just a single police car, but still showing the division between the countries,” he explains.

Muja is also exhibiting his previous work “Catch Me,” which depicts him jumping over the American-Mexican border. “I try to show the freedom of movement that happens from America to Mexico, but not vice-versa,” Muja says.

Leaving the bus station and following the map provided by Autostrada Biennale leads to numerous venues across Prizren, including The Archaeological Museum, the ex-watch tower that is part of the Hamam built in 1498, the Saraj family house dating from the 19th century located in historic center of Prizren, the Lokvica house, which is the oldest house in the Marash complex and whose owner swears was built 250 years ago, and the Blue House, another 19th century house located in between the castle and the city. 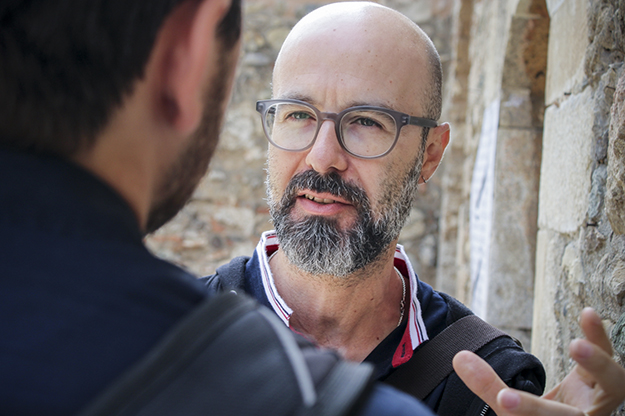 At the Blue House, Stefano Romano, an Italian artist currently working in Albania, is exhibiting his work “Haiku,” a series of four videos that are based on the traditional form of Japanese poetry, Haiku, which consists of three lines, two of five syllables in length, and a middle line of seven syllables.

Romano explains that Haiku are also divided into three moments, two of which resemble each other, while the third opposes them. His Haiku is largely based on urban exploration: “the core is some sort of investigation for the city, which interests me because with this game of composition and video I can touch the reality of the city,” he says. “I touch the very idea of the city’s borders, and I dismantle and recompose it in a totally different way, where the spectator loses the idea of time and geography.”

Romano aims for the audience to find it hard to discern exactly where they are, which city you are looking at and what year it is.

After the Blue House, which is located on the way up to the castle, there is another venue called “Ruins,” where Doruntina Kastrati’s installation, “The Long Walk,” features some goat like figures with three meter long legs perching in different positions, some gazing inward to the rooms and some to the city below. Curator Hsu explained that the figures were mountain goats who have made their home in the most extreme conditions, surviving on steep cliffs and searching for scarce food with their long legs, a metaphor for the long walk of refugees in search of a home. 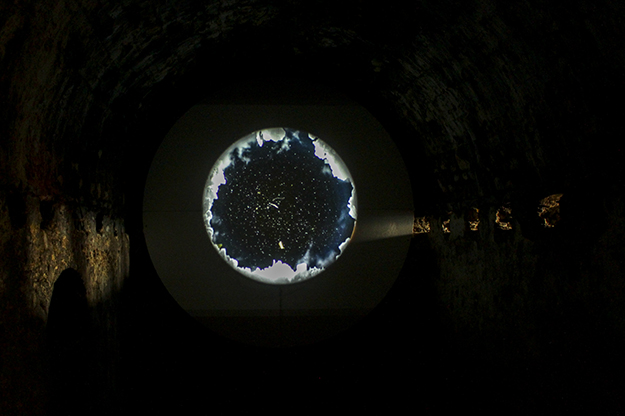 Another work by Saso Sedlacek, “Sky in Ruins” highlighted the amount of debris being left by humans in space as well as on earth. Photo: Agan Kosumi / K2.0.

The last stop is the Prizren Castle, which hosts a wide array of exhibitions including another impressive work from Sedlacek, called “Sky in Ruins,” which Hsu placed in one of the store rooms of the castle. With only a couple of tiny openings on the right side, the room has a golden glow darker than twilight. The setting of the project gives it a feeling of antiquity facing the rapid expanse of modernisation, with the far wall featuring a projected video showing a vision of the nearby cosmos cluttered with space debris.

In its program, the Biennale describes the purpose of this project as pointing out that “the universe despite its vastness, is not so unlimited that we can go on simply moving our bad habits from Earth out into space,” while defining space as the next possible border.

The castle also features a video work, “Cartographers,” by Valentina Bonizzi, an Italian artist currently residing in Tirana. “Cartographers” focuses on Italians at the outbreak of World War II, when Mussolini declared war on the Allies, and the consequences that action had on ordinary people, just because of their Italian nationality. 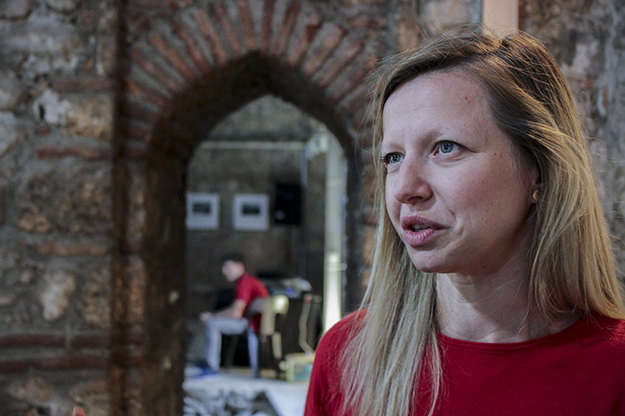 “I made it between Glasgow, the outskirts of Paris and a village in the South of Italy,” Bonizzi says. “It took me four years to make this video. People speak about their experience of the war, and through the editing of these interviews, through their stories I understood how nationality is something that is completely an invasion.”

In short, the video explores the role nationality plays in your daily life, and defines how others are going to react towards you. It is an idea curator Hsu highlights in an interview with K2.0, stressing that borders are still creating tensions, and disputes even in our contemporary world, and are a real issue worthy of reflection, which he aimed to achieve through his curation.

Organizers have said that they are very pleased with the “results of the hard work, which has turned the city both into a museum and a center of the contemporary, while marking new spaces for experimentation upon the hundred years of Prizren’s history.”

For now, they say that they are enjoying the wide exhibition laid out in Prizren, fruit also of the nine months of work from Hsu. They add that the first edition is just the cornerstone of this new artistic journey which aims “to expand the cultural borders and awaken the creative energies of Kosovo, the region and more.”

Autostrada Biennale runs until September 23 at venues all across Prizren.