How can Kosovo deal with the wartime past? - Kosovo 2.0
Blogbox | Transitional Justice

How can Kosovo deal with the wartime past?

How does any country that experienced years of mass violence and egregious human rights abuses move beyond historical grievance while ensuring tragic events from the past are not repeated? When so many citizens have experienced trauma, oppression or displacement, how can the past be tackled in a way that serves justice and allows for a common future?

In Kosovo, these questions have been tackled by local judicial institutions, but mainly by international instruments like UNMIK, the ICTY and EULEX, and through regional initiatives like the proposed Truth and Reconciliation Commission. Later this year, the new Specialist Chambers in The Hague will seek to bring a measure of justice to some of the victims of the war in 1998-99 and its aftermath. Domestic efforts have been mainly small-scale, local and interpersonal, and mostly led by civil society.

Since 2012, the state’s key initiative has been the Inter-Ministerial Working Group on Dealing with the Past and Reconciliation. This body was established to serve as a focal point within government for the development of a comprehensive, inclusive, gender-sensitive process on dealing with the wartime past, with the aim of ultimately producing a National Strategy on Transitional Justice. Representatives of public institutions and civil society were appointed, with international organizations and diplomatic missions present as observers, and an advisor to the prime minister serving as chair.

The process is now at a critical turning point.

Despite the sincere commitment of the Working Group’s members, it has been unable to achieve its objectives, due to a mix of factors including inadequate leadership and management, lack of political ownership, the poor representation and participation of Kosovo’s minority communities, no representation of civil war victims, and a failure to engage the broader public.

The process is now at a critical turning point: Donor support for the Working Group has ended, the prime minister shows little interest in continuing its work, and the president’s proposal to launch a new Truth and Reconciliation Commission directly challenges its primacy in setting the agenda for dealing with Kosovo’s wartime past.

Against this background, our organizations initiated an independent, systematic and objective reflection on the process of developing a National Strategy on Transitional Justice. Two expert consultants undertook the review in January, and a report was launched yesterday with recommendations on how to move forward. 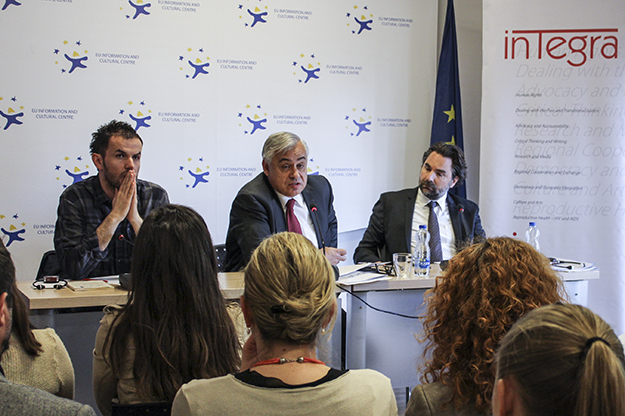 A civil society report looking into the work of the Inter-Ministerial Working Group on Dealing with the Past was launched at the EU Cultural and Information Centre in Prishtina this week. Photo: Integra

To produce a National Strategy, the government must recommit politically to the Inter-Ministerial Working Group process. Building trust with representatives of civil society and minority communities, planning for inclusive national consultations, and linking up the National Strategy to other processes relating to transitional justice in Kosovo (including a new Truth and Reconciliation Commission) are essential success factors.

Every society must answer the question of how to deal with its wartime past in its own way, based on the lived experiences and perspectives of its people and the unique specificity of its context. A credible, legitimate National Strategy on Transitional Justice might serve to consolidate and energize Kosovo’s broader framework for dealing with the past, propelling the country and its communities toward new answers to the toughest questions.

This year, the Specialist Court and the president’s Truth and Reconciliation Commission are likely to move issues of the wartime past back to the center of public debate. Our hope is that the report released recently will contribute not only to producing a much-needed and meaningful National Strategy, but that it will also help other initiatives like the president’s commission to avoid the pitfalls that hobbled the Inter-Ministerial Working Group. Ultimately, we hope it will deliver a breakthrough for justice and better relations between communities.

Our full report on Kosovo’s progress toward a National Strategy on Transitional Justice can be read here.