Pendija and Zumret Ahmeti never miss being in Dragash each year on May 6. Sitting on a colorful cloth under the branches of a tree newly in leaf, the spot they’ve picked ensures the whole atmosphere of the annual Gorani Day festivities plays out in front of them: The ‘Vlaska’ clearing near the village of Vraniste in the foothills of the Sharri Mountains is overcrowded with thousands of people celebrating.

Although somewhere in distant history the celebrations were originally held to mark Saint George’s Day and the transition of winter to summer, in modern times for most Gorani people the day has somehow lost its religious connotations. Today, it is officially recognized by the Republic of Kosovo as the Day of the Gorani. 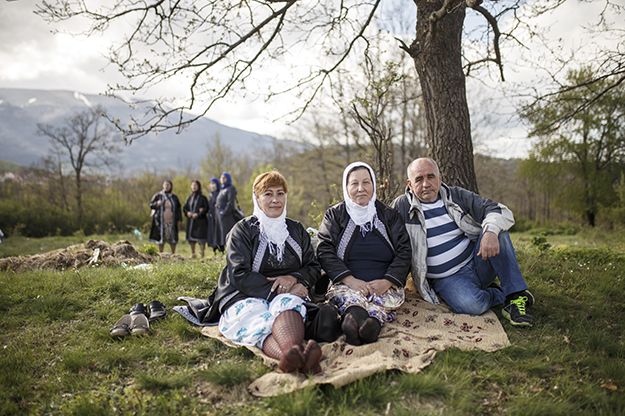 “This tradition of gathering here has happened for many centuries,” Zumret says. “All the Gorani come here every year. It is a tradition that has not gone away and never will. More than the Djurdjevdan [St George’s Day] it is a celebration of Gorani people, a possibility for us to meet and see each other.”

The small mountain road that cuts its way through the middle of the celebrations and winds on up and around the mountain is lined by people on both sides, as a constant procession of others walk slowly up and down, greeting familiar faces along the way.

May 6 is also a profitable day for business: Gorani, Albanian and almost all of Kosovo’s ethnicities are represented through different tradespeople located along the field, selling food and drinks, materials for women’s clothes, children’s toys and turns on the fairground rides brought in for the occasion. 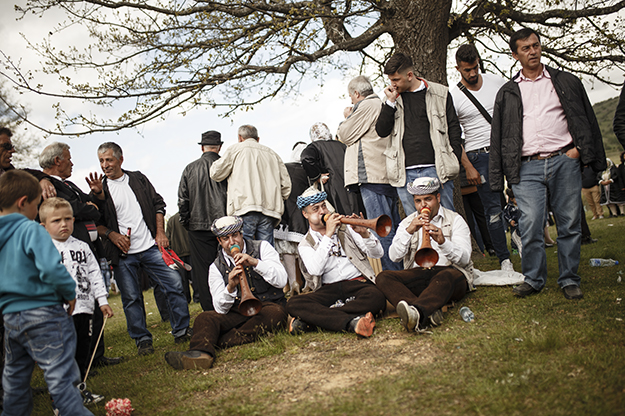 The sounds of traditional ‘kaval’ can be heard around the hillside celebrations. Photo: Jonas Kako.

In the middle of the field, to the sounds of tupans (drums) and kaval (wind instruments), people dance the traditional steps of the two-beat kolo (‘circle’) dance as many others stand looking on. Around the periphery families sit eating their own small picnics, while others wander around, catching up with family and friends. 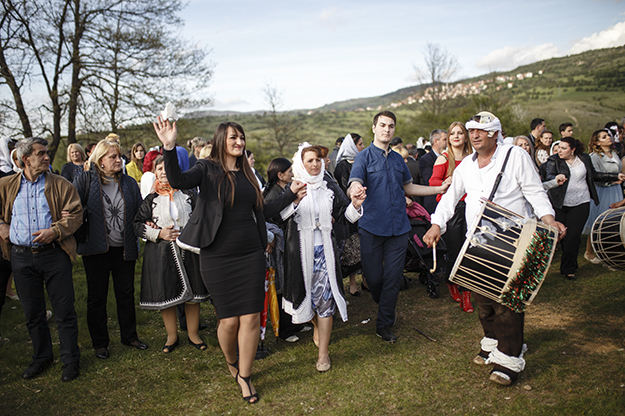 “Look over there, that young woman probably just got engaged,” 57-year-old Pendija says, pointing out towards a woman dancing the kolo; the young woman, seemingly in her 20s, is dressed in traditional embroidered white Gorani dress, with a hat full of liras (old gold coins) contrasted with a small flower behind the ear. According to Gorani tradition, young unmarried or engaged women would wear the white jelek (waistcoat) to be distinguished from the black embroidered jelek worn by married women.

“Look at this, it is all hand-made,” Pendija says as she proudly shows her black jelek. “But now I carry just a simple scarf. I am not young anymore to wear those colorful ones.”

Although they have been living in Belgrade for the last four decades, being Gorani and originally from Kosovo’s Gora (Highlands) region in the far south of the country, is very important to the couple’s identity.

“You see there,” Zumret says as he gestures toward the mountains. “There is Kukulan — my village. I have to be here on May 6 and also during the summer. My nephew is 6 years old, born in Belgrade and cannot wait to come here. This place just drives us here.”

The Gorani community are a Slavic Muslim ethnic group from the Gora region, in the mountainous triangle of Kosovo, Albania and Macedonia; the Kosovo section is the largest of the three, with most of the country’s estimated 11,000 Gorani being concentrated in the town of Dragash and its surrounding villages. But due to mass immigration throughout the 20th century, as thousands left their underdeveloped region to find work abroad, the population in Gorani villages today consists mainly of elderly people whose whole families often live in the diaspora.

The registration plates on the cars that pack the small mountain road are from Serbia, Macedonia, Albania and almost every EU country, indicating the range of locations from which people have come to attend. Gorani people say that over 80 percent of people in the festivities are from the diaspora.

Jasmin Redzepovic is a 28-year-old Gorani who travelled from Switzerland to celebrate the day with members of his community.

“The day has that effect for young people, particularly for those living abroad to get to know each other,” Jasmin says in the Gorani language ‘Nasinski’ (roughly ‘Ours’), a non-standardized south Slavic dialect. “It is more of a day for youth. And it is beautiful that you have the possibility to see everything. Family and people you know are in one place. There is music, joy and people — all in one.” 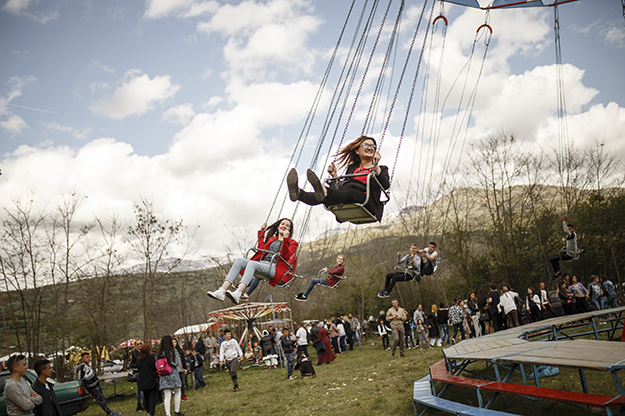 Many young people attend the Gorani Day celebrations, with fairground rides and other entertainment put on for them. Photo: Jonas Kako.

Following the celebrations in Vlaska, evening celebrations take place with music and dancing in other villages, with a similar pattern playing out in different location on the following days.

As Dragash’s tailor of bridal waistcoats, Aslani Sukrija is a well-known figure for people in the celebrations. He says that gathering together in the Vlaska clearing originates from before World War II when families said goodbye to their loved ones emigrating to the diaspora.

“Earlier old people would come here to accompany their families,” Aslani says. “They would stay here until the silhouettes [of their loved ones] disappeared from sight.”

The tailor isn’t happy that the majority of women aren’t wearing the distinctive traditional Gorani dress. “Earlier all the women wore Gorani dress,” he says. “But now, the assimilation of people living abroad is happening and they dress according to their style.”

With so many young people coming from Gorani settlements throughout the diaspora, Aslani is hopeful that Gorani culture and traditions will be preserved for generations to come. “I feel happy that people [are willing to] pay so much just for this and this tradition needs to continue,” he says. “A culture and language of a community needs to be preserved. This is a richness of every society everywhere.”K