The city cinemas being wiped away by privatization.

In 1936, a piece of big-screen projection equipment arrived in Ferizaj. This year was to mark the start of a cinematographic tradition that would last for many decades in the city. It is not known how the equipment came to the city, or in what circumstances the first film was screened. But it was a well-known fact that the cinema occupied the space of what used to be a local inn.

This cinema does not exist anymore, but the equipment does. Since 2004, it has been in Bejtullah Maliqi’s home. He had devoted his life to Ferizaj’s cinema since the ’80s. 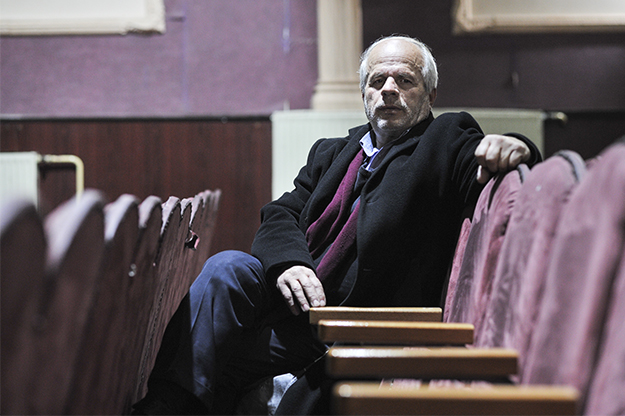 Maliqi managed the cinema up until 2004, when the Kosovo Trust Agency (today known as the Privatization Agency of Kosovo, PAK) made the decision to privatize the cinema facilities. He was against this decision, which he feared would leave the city without a cinema. In an act of revolt, and attempting to save the history of the cinema and the city, he took the equipment to his home, so that he could return it to the city again when a new cinema was built.

“If the equipment were to be damaged, a part of the city’s history would disappear,” says Maliqi, justifying his actions as being for the good of society.

His suspicion that the equipment would not be preserved in the old facilities was confirmed not long after the privatization took place. That same year, the new owner knocked the facilities in Ferizaj’s city center down to transform the place into a business and residential building.

Maliqi talks about this with anger, even 10 years after the destruction of the cinema. According to him, this action also destroyed a tradition of cinematography in Ferizaj, which had lasted for five decades. Maliqi recalls and shares memories of a time when films would be screened despite difficult conditions.

"The moment the cinema was privatized, it didn’t function anymore even for one more day."

“Today, it is incomprehensible that the cinema is not functional,” he says, knowing how many opportunities there are to develop this tradition compared to times gone by. “Cinema was developed mainly by cooperating with different local festivals, or festivals from Albania.”

He highlights one cooperation that stands out in his memory from 2002, when they screened the blockbuster “Gladiator,” after the U.S. military camp “Bondsteel” agreed to pay for the rights to screen the film.

“The moment the cinema was privatized, it didn’t function anymore even for one more day, despite the fact that this is prohibited by law,” says Maliqi, referring to the Law on Cinematography, which sets out restrictions on changing the use of cinemas.

He also bitterly says that the cinema was sold for a significantly undervalued price, believing that the screening equipment alone is worth 150,000 euros, “not to mention that [the site] is located in the city center.”

In 2013, these events would unite Ferizaj’s artists, mainly actors, directors, painters and other art lovers, who protested against the destruction of the city’s tradition of cinematography.

They protested through films.

Frustration pushed the city’s artists to establish FerFilm Festival, holding its first edition in October 2013. The festival has since been held annually, always with one continuous demand: finding a solution for the absence of a city cinema.

For festival director Arbnor Karaliti, the way they have protested is absurd in itself. “A film festival is being organized in a city that has no cinema!” he says. 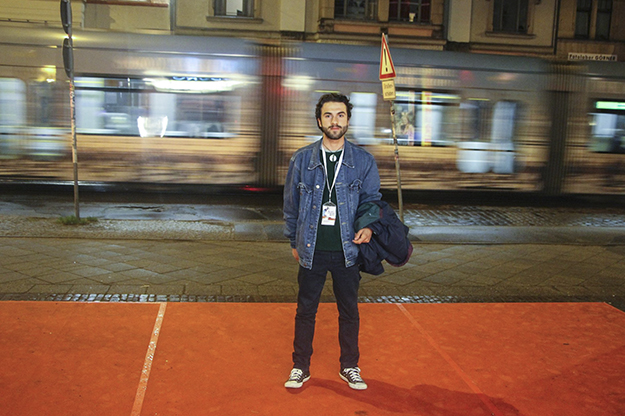 Arbnor Karaliti is the director of FerFilm Festival, which was first held in 2013 as a protest against the lack of a cinema in Ferizaj. Photo courtesy of Arbnor Karaliti.

Because of the absence of a cinema, organizers chose to screen their films in alternative spaces, such as the theater, public squares and the city’s youth center.

Then, in 2015, the Ministry of Culture, Youth and Sport, in cooperation with the Municipality of Ferizaj, contracted the building of a new cinema and youth center.

Karaliti speaks modestly about this achievement, but believes that the decision was influenced, among other things, by the community’s protests. “Before we organized the festival, representative of institutions would not even speak about cinema, let alone plan to build one,” he says.

However, construction is yet to be completed, so this year once again the local directors and 31 international directors were forced to screen their films in alternative spaces.

Ferizaj’s cinema is not the only one to suffer as a result of the privatization process, which started in Kosovo in July 2003 and continues to this day. The cinema in Gjilan, which was built during the ’80s and functioned for a short period after 2000, was privatized by PAK in 2008.

This process is not the only common denominator between Ferizaj and Gjilan. During the ’80s and ’90s, cultural life in these two cities used to be more diverse.

Like Bejtullah Maliqi, Gjilan sociologist Avni Rudaku also sees this absence of a cinema in his city as paradoxical in today’s age. This is because in the past, despite difficult conditions, he remembers that Gjilan had a richer cultural life.

For this he blames the negligence of institutions toward the arts in general, and  highlights that political parties don’t deal with culture in their programs. “When they do work in this field, they do so only superficially,” he says. He points to the fact that in the most recent local elections, none of the candidates for the Gjilan mayorship mentioned a cinema or a need for it.

Rudaku also criticizes the Kosovo Cinematography Center (QKK), which he says was silent while cinemas were being obliterated.

“I doubt that the artistic taste of people who represent cultural institutions is adequate,” he says, criticizing the artists’ community for not reacting. “They have never shown their existence as a community.” 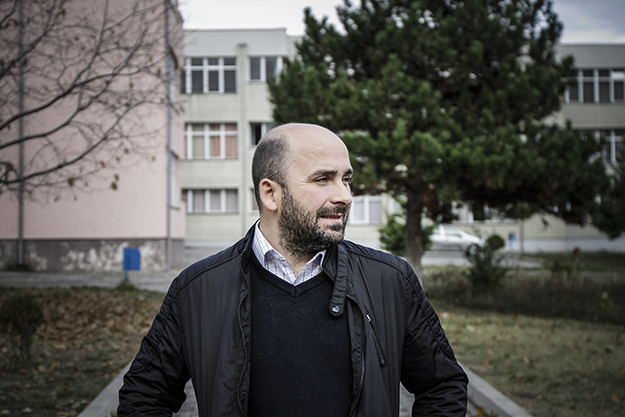 Avni Rudaku believes that more should have been done by cultural institutions to protect cinemas such as the one that was previously in Gjilan. Photo: Fikret Ahmeti / K2.0.

Legally speaking, it seems the tools existed to ensure the cinemas in Gjilan and Ferizaj didn’t just disappear. Article 8 of the Law on Cinematography that was passed in 2004 states: “Socially or publicly owned cinemas, privatized or given for rent to natural or legal persons, domestic or foreign, may not change the purpose of their activity without [QKK] consent.”

On top of that, many privatizations under the Kosovo Trust Agency used a Special Spin-Off process, which meant conditions could be attached to sales such as the buyer having to keep the asset in the same line of business. K2.0 asked PAK to provide details of the privatization of the Ferizaj and Gjilan cinemas, including the contracts and any special conditions attached, but received no response.

Arben Zharku, executive director of QKK since 2014, told K2.0 that he was himself surprised by the failure of QKK to act on attempting to protect the cinemas. He says that QKK has never received a request for approval for changing the use of a cinema. “But the possibilities for acting are limited, because we do not have mechanisms that would enable us to work in the field,” he said.

QKK was quicker and more efficient when it reacted recently regarding the case of Kino Lumbardhi in Prizren in 2014 and the Jusuf Gervalla cinema in Peja earlier this year. Both these cinemas were due to be privatized, decisions that incited reactions from civil society and the artistic community. Conscious of the destiny of cinemas in other cities, the citizens of Prizren and Peja mobilized to prevent their cinemas from being lost.

Kino Lumbardhi has now been declared a cultural heritage site and a foundation has been established to maintain it, whereas a petition was initiated against PAK’s decision to privatize Jusuf Gervalla, which has had the effect of stalling the process and no final decision on its future has yet been made. This year, Jusuf Gervalla cinema has been managed by Anibar festival and has screened films for the first time in 15 years.

Functional cinemas can be found in only three of Kosovo’s seven major regions, namely Prishtina, Prizren and Peja, whereas Ferizaj, Gjilan, Mitrovica and Gjakova have no spaces dedicated solely for screening films.

In the absence of cinemas, alternative spaces are often used in order to meet the high level of demand. Paradoxically, despite this, municipal officials in these cities have very often justified their lack of action to functionalize cinemas by saying that there is no demand or funds for them.

For Rudaku, such arguments only serve to further convince him that municipal officials have no idea about the needs of culture in their cities. “The absence of cinematography has restricted local film critics… cinemas influence an increase in the general cultural level [of society],” he says.

“How can we talk about the visual quality of a film? How can we talk about other details of a film when it is watched on a computer screen?” says Rudaku, who is convinced that allocating a space for screening films does not require big investments. “All we need is to be creative and to select adequate people to direct them [the cinemas].”

Rudaku believes that there is an opportunity to utilize existing spaces in Gjilan, such as theaters, halls belonging to institutions, schools and youth centers.

According to Zharku, QKK has proposed to the Ministry of Culture that such an idea be implemented throughout Kosovo. “In cooperation with [public institution] Kosova Film, we have conducted a study for existing cinemas — including cultural centers — and have identified a few suitable places that can be equipped with projectors in order to create alternative cinemas,” he said, further explaining that this method is adequate if current conditions for functionalizing cinematography are taken into account. 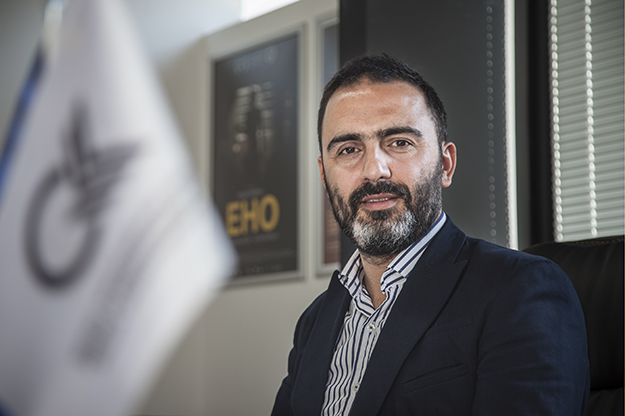 Zharku mentioned that a similar scheme has worked in Macedonia, which has invested in projectors that have distributed throughout different municipalities so that they can be utilized for screening films in public spaces.

On the other hand, Zharku also explained that the idea in Kosovo is to distribute films in different municipalities that have been co-produced by QKK so that they can be screened in alternative cinemas, and subsequently to use the revenue that is produced from tickets to then functionalize the spaces further.

“In the contracts for subsidizing films, producers are obliged to screen premieres of their films for at least one full week in public cinemas, then to reach an agreement with a local TV channel, and eventually to screen it online,” Zharku said.

Considering that QKK co-produces films with taxpayer funding, this method would help to create a situation in which citizens would have access to films that are paid for using their own money. Up until today, this service could not be fulfilled by the state, particularly because in some cases the only cultural spaces dedicated specifically for film have been put up for auction.K