Copyright, copyleft or something else completely? - Kosovo 2.0
Lately | Copyright

Copyright, copyleft or something else completely?

Copyright was the topic up for discussion as K2.0 hosted its latest Small Talk on Tuesday evening (April 24) at the Museum of Kosovo’s Lapidarium.

Moderated by professor of law at the University of Prishtina Luljeta Plakolli, four panelists took part in two hours of passionate debate between each other and engaged audience members. Plakolli set up the discussion by asking a broad but basic question: What are the legal, economic and moral rights of the creator?

As the representative of Kosovo’s government, Valon Kashtanjeva, Director of the Copyrights and Related Rights Office in the Ministry of Culture, Youth and Sports, began by chronicling the legal evolution of copyright in Kosovo. The first step was taken in 2004 when a law was passed to protect intellectual property rights. More recently, the government approved a new law in 2011 — amended in 2016 — that gives Kosovo a legal copyright framework in line with European standards. 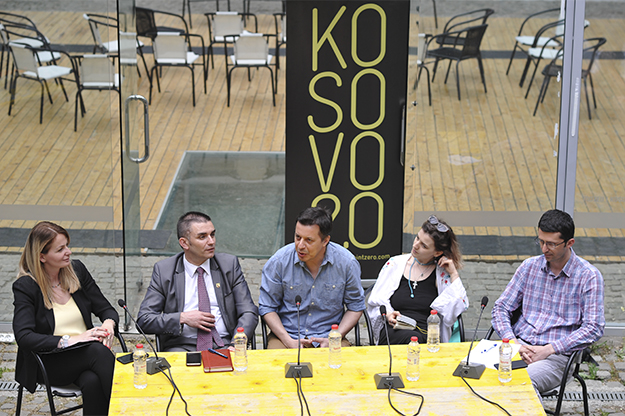 Kashtanjeva acknowledged that copyright laws need constant reviewing to stay relevant. As new technology makes it easier for people to transmit and receive content, copyright faces challenges. These days, a mobile phone is all that takes to record video or take a photo. Still, Kashtanjeva contended, copyright law retains its function as a way of encouraging creation and ensuring fair compensation. For him, the need for the existence of copyright regulation in society is self-evident.

Music producer Florent Boshnjaku, recounting his own experience as a musician in pre-war Yugoslavia, emphasized that protecting copyright is crucial to keep the music industry vital. Boshnjaku heads APIK, an association — licensed by Kashtanjeva’s office — that he founded in 2012 to help protect authors’ copyrights in the music industry.

“Author’s rights should be protected not because of egoism but to keep culture developing,” Boshnjaku said.

Kosovar musician Blerta Kosova also related her own experiences in music to the topic of copyright. As a young artist, she has had to make a tough compromise: maximum exposure or financial compensation for hard work.

“Until recently, I was not very interested in the benefits of copyright. I made many albums that I shared for free that more people could listen to,” Kosova said.

“We have to be careful so that we are not more Catholic than the Pope here.”

Recently, she has made the touch decision to switch to a different method and to start charging for people to buy her albums. She admitted that this has been a tough decision as she is worried that it mostly affects her friends and family, while also having a big impact on her music’s reach. That dilemma is familiar for many up-and-coming creators today.

Arianit Dobroshi, President of the board of open source advocates FLOSSK, took a more critical perspective on copyright. Noting that copyright as a legal concept has come into existence relatively late, he expressed scepticism about the view that economic incentives are central to creation. Moreover, Dobroshi urged political justification for every new law passed in Kosovo as there are global economic interests in stronger protection for intellectual property rights.

“We have to be careful so that we are not more Catholic than the Pope here,” Dobroshi said.

To counter the standard conception of copyright, Dobroshi presented an alternative approach that is known as “copyleft.” A work covered under copyleft can be used and reproduced freely as long as it retains those same rights in its derivative versions. Put simply, you can use, modify and even distribute your version of someone else’s work, but you must grant others the same rights to access your modified creation. That way, copyleft intends to protect works from being used for commercial gain by other parties than the original author.

While the panel discussion mostly focused on the music industry, questions were raised from the audience concerning work in other genres. What can photographers or writers do to protect their work from being used unlawfully? Boshnjaku suggested that collective management groups, such as AKIP’s model, could be founded in other fields as well. 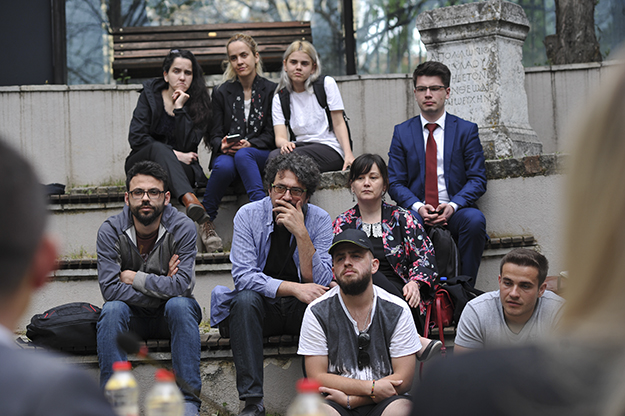 Boshnjaku stressed, however, that any dispute cannot go through an association, but needs to be settled in court. One member of the audience raised concerns that suing is impractical and difficult for individual authors, particularly given the backlog in Kosovo’s judicial system. Kashtanjeva acknowledged that a slowly functioning judicial system may deter creators from filing lawsuits. Still, he reiterated, the only way to receive compensation for breached copyright and keep the law relevant is to sue — there is no ‘plan B.’

A number of audience members questioned the whole premise of copyright, arguing that it was an invented concept that was serving largely to commercialize culture at the expense of creativity.

Some audience members also voiced a lack of affordability as undesirable effects of copyright, as for a person on the average Kosovar salary buying a book for self-development or education is often a disproportionate and unrealistic percentage of their income. Dobroshi highlighted that the widespread extent of streaming, downloading and copying of printed materials is a reflection of the socio-economic conditions in Kosovo, suggesting that the whole copyright framework needed to be rethought given such circumstances. 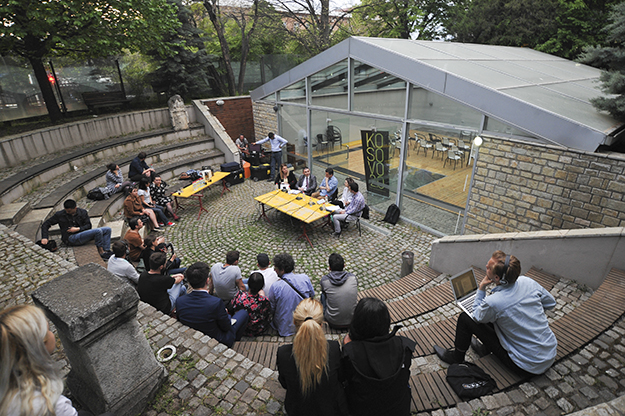 Kashtanjeva emphasized that copyright laws come as part of a package where Kosovo is unable to remove disagreeable aspects while keeping its advantages. International organizations and unions that Kosovo is aspiring to join, such as the World Trade Organization and the EU, require strict standards of intellectual property rights, while copyright regulation is based on Kosovo’s legal and constitutional framework. Regardless of any other arguments relating to the rights and wrongs of copyright, Kashtanjeva said that it is impossible to go back in time.

A recurring topic throughout the evening was the relation between intellectual and physical property rights. How can the value of a poem be weighed against that of a bag of tomatoes? Just as we think about where a bottle of water comes from, Boshnjaku argued, we should also think about how a song is made. Both have a value chain of costs and investment. However, it was generally agreed that technology and intellectual property is distinct in some way as it allows content to be distributed and used widely with little cost, in contrast to the consumption of material goods.

The panel was split on several central topics, but its members and the audience agreed on one thing: copyright issues need to be further discussed in Kosovar society.K