Tandem and X-Rated Self Love look beyond the wall.

Tandem is a newly formed musical duo made up of two regular fixtures of the scene, Oda Haliti and Blerta Kosova. The new project attempts to blur a number of entrenched musical ideas with a relentlessly genre-hopping sound; while their live shows tread a ground somewhere between DJ sets, laptop productions and live performance.

Asked to describe the duo’s roles in Tandem, Haliti insists they are not just producers or DJs. “We make our own stuff as well,” she says. “There is some music from Blerta, some stuff we improvise in the moment, and there are other tracks that we mix.”

Music has always been a big part of Haliti’s life, all the way back to childhood she was sequencing tracks and mixing styles. “My sister often reminds me that when I was little, I would make playlists on cassettes, and know exactly how long the tape would run for a song,” she reveals. Her first computer allowed Haliti to continue putting playlists together, her taste in music ever expanding.

Haliti used to run a bar in Prishtina, Gege, and would often invite DJs and other musicians to play there. In time, she also started playing music herself. Another frequent performer was a teenage musician from Mitrovica, Blerta Kosova, who used to go to Gege regularly and perform with her band set up through the Mitrovica Rock School. Kosova also performed solo, and her shows at Gege would never be the same twice, as she experimented and developed her sound, playing with guitars and laptops. 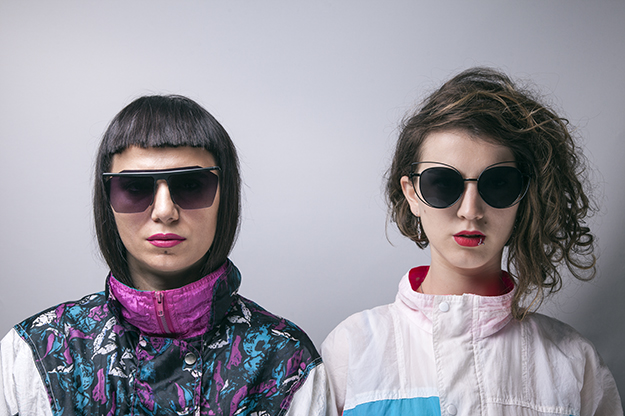 Experimenting is the basis of Tandem, Kosova explains, and talking to the duo it is clear that Tandem’s music comes as an outflow of a diverse musical background, mixed with an inquisitive attitude toward new tunes.

“I have gone from hip-hop and Britney Spears to Aphex Twin and Radiohead,” Kosova says. “I have listened to everything all my life, so it is natural that we are together. There are no exceptions for me in music, and it’s the same for Oda. We are both open to new stuff.”

Kosova believes that for Tandem, experimenting with music has become more than just fun. “We can see that this country is not offering anything. Artistically, musically it is quite weak, and to be honest, it is not developing much,” she says, the disappointment not hidden from her voice. “Someone has to do something, and we felt it necessary to be an initiative for a small group of people who want to serve up something different.”

“It can get depressing, because I'm not gaining anything emotionally or financially, but it needs time, and those few people who appreciate my music give me the strength to go forward.”

While the world “out there” beyond Kosovo’s borders has endless styles and is relentlessly creating new sounds, Tandem feel that Kosovars have become static when it comes to embracing new music. “Music now is so hybridized, so mixed, and there is so much good music, that it is a sin to call music bad,” Haliti says. “I think it is a bit shallow to make the same music all your life. To make techno or rock, or hip-hop, although all of them are good. But why not mix them all together? Then you get something original. That’s what you heard at the opening of DAM Festival [in Prishtina in April], that was Tandem.”

Kosova and Haliti feel that the Kosovar music scene is currently fixated upon certain genres of music, and that everything outside of that tends to be prejudiced against, limiting its artistic and musical spectrum. As if the current visa regime meant Kosovo was not closed enough.

“It is true that whatever is being served up, others will eat,” says Kosova, stating that in Kosovo, commercial music is the main dish. “That is why it is so necessary to serve something else. So these people who have projected walls around themselves can see that there is also something beyond that wall.”

Kosova reveals that she has often felt uncomfortable in the Kosovo music scene, because frequently audiences have not known how to react to her music. Nonetheless, she refuses to quit. “It can get depressing, because I’m not gaining anything emotionally or financially, but it needs time, and those few people who appreciate my music give me the strength to go forward,” she says. 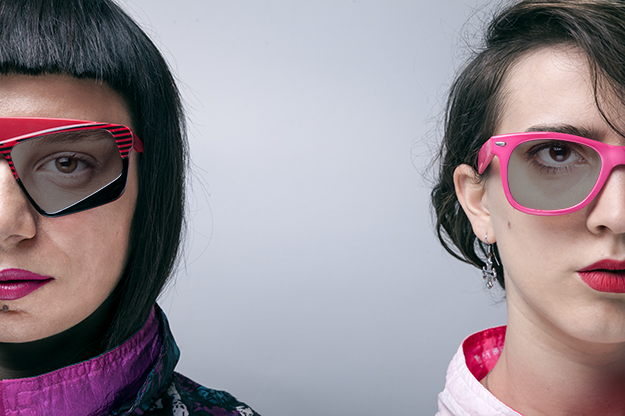 So far Tandem has performed twice, in Prishtina’s Rilindja Warehouse at the opening of DAM Festival and at the Tulla Culture Center in Tirana. “When we performed for the first time in Tirana, we were anxious because this experimental music is new for everyone, and when it is new it is quite difficult, and you need time to get used to it,” Haliti says.

Contrary to expectations, the crowd reacted really well, with one gig goer telling the duo the night was “an education” for the Tirana music world. “We felt really good, because we saw how we can influence other artists as well,” Haliti says. “If others see it as an education, it is really successful for our first performance.”

Alongside their futuristic sound, Tandem add visual and fashion elements to their live shows. At the Rilindja Warehouse performance, they wore not quite matching outfits styled by Venera Mustafa, Haliti’s an upturned mirror image of Kosova’s. Throughout the show, the stage lights dazzled, reflecting off their minimalistic dance moves and “sunglasses at night” style.

For Haliti, it is vital that when you have the stage, you take to it with responsibility and make the most of it. “Miles Davis said that 30 percent is music, and 70 percent is attitude,” she states.

Another musical duo attempting to break boundaries are Jora Lumezi, and Diora Binxhiu, who go by the name X-Rated Self Love. Like the members of Tandem, Lumezi and Binxhiu are both music lovers, and have discovered the joy in sharing the music that ignites their passions. Their mission is to create playlists that allow discovery, and, above all, dancing.

X-Rated Self Love began in one of Prishtina’s many deceased alternative spaces, Tentene. The bar’s music policy revolved around inviting different people to contribute playlists, rather than a DJ set. “When we had to name the event, we named it X-Rated Self Love,” Lumezi explains. “We did not mean the title for ourselves, we meant it for the event, but since then anyone who called us referred to us with that name. We did not want to impose it, it just stuck somehow.”

Binxhiu, a social media manager, explains that they were motivated by not hearing enough of the music they loved when they went out. Club sets would often fail to make them move, especially with the prevalence of techno in the Prishtina underground.

“It was everywhere,” Binxhiu says. “Everyone was listening to and playing techno. Usually in Tentene, the music that was played was dark techno, so we wanted to play a different kind of music, and be known for lighter and happier tunes.” 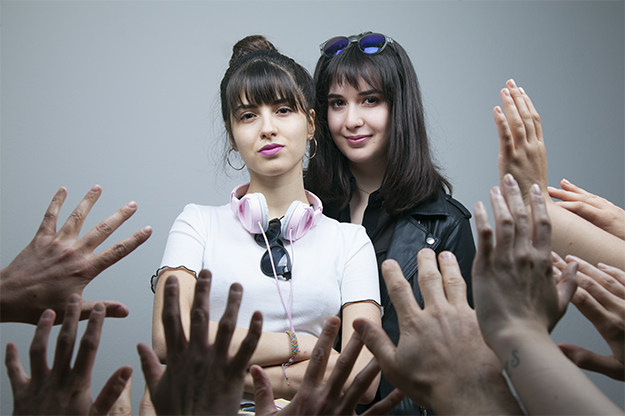 The duo explain that their selection policy is determined by the crowd, and what feels right at the time. “Sometimes we try to play music that everyone knows, but haven’t listened to for a long time,” Binxhiu explains. “But we also try to play music from new artists, to get people to see that there are still incredible new musicians, be that in hip-hop or any other kind of music.”

It is a year since they started, and the duo have played in a number different clubs across Prishtina, but mostly in the alternative spaces where music is the main draw. Lately, X-Rated Self Love themselves have become a main attraction.

"What we often try to promote is new women musicians, especially in rap, because it is known as a genre where there were lots of men."

“Lots of times people come up to me and say that we only decided to go out when we saw that you were playing, otherwise we would stay at home…” Binxhiu says, before Lumezi interjects, laughing. “Probably they’re lying just to make us feel better,” she jokes, though she agrees that there is truth to her friend’s statement. “Yes, usually some people come because they have gotten used to us,” she says. “Mostly they are younger, although recently I have seen some of the older generations as well.”

In making a name for themselves, X-Rated Self Love have had to battle against more than just conservative tastes. “When people saw that we were girls, they took us for granted,” Binxhiu explains.

In the early days, many people would approach the DJ table and make requests. “When a guy is playing music, who looks more confident in what he is playing, people don’t go to him and ask for something, they just listen to what he is playing,” Binxhiu states.

Now, they have the courage to push their own musical agenda and promote new musicians, especially fellow women entering male dominated genres. “What we often try to promote is new women musicians, especially in rap, because it is known as a genre where there were lots of men,” Binxhiu says. “So whenever we hear new things from Princess Nokia or Tommy Genesis, we play them all the time.” They have seen results as well, with dancefloors filling up during their hip-hop heavy sets.

The duo also like to promote local artists as well, but have a gap in their music collections when it comes to Kosovar women rappers. “There used to be a rapper called Qika from Prishtina, and we played her music one day, but she doesn’t make music anymore,” Lumezi says. “She was the same generation as [Kosovar rap legends] NR and she used to do really hardcore rap, but as far as we know, no women are rapping in Kosovo at the moment.” 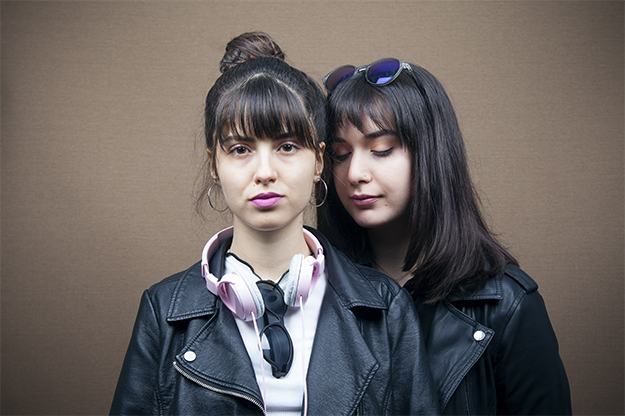 The plans of X-Rated Self Love remain the same; playing from time to time in local clubs, promoting new music, having fun and dancing with others. They have been invited to play in some of Prishtina’s more mainstream clubs, but have refused the offer on the basis that they would “not want to spoil the night for anyone.”

As Binxhiu explains, there is a simple joy in playing music that is the heart of the duo’s philosophy: “It is really fun to play music that you like, and to know that others are having fun as well.”

With Tandem and X-Rated Self Love, Kosovo’s musical landscape has become a lot more adventurous, and a lot more fun with this surrounding aura of local avant-garde. There is more beyond the wall.K