“It sucks [to be hated for what you do],” admits Jovana Prusina from the Youth Initiative for Human Rights (YIHR). “But the good thing is there are only a few of them.”

This year, Prusina’s organization took up the role of arranging the Belgrade leg of the fourth edition of the ‘Miredita, dobar dan!’ festival, which took place against a backdrop of heated protests outside its venues. “Whenever you challenge the dominant narrative, this is what you get,” she concludes.

The four-day festival was established by democracy and human rights activist, Miljenko Dereta, with the aim of aiding reconciliation between Serbia and Kosovo. Dereta’s ‘citizen initiative’ partnered with a Kosovar NGO, Integra, to organize a festival that would bring arts and culture from Kosovo to Serbia, and vice versa.

Although every edition of the festival has sparked some kind of protest, this year they escalated in tone, and were accompanied by a media frenzy in the pro-government tabloids. Informer depicted the festival as “treachery,” and “the raping of Serbia, in the belly of Belgrade,” partly due to Atifete Jahjaga, the former President of Kosovo — a country and a position which Serbia does not recognize — being scheduled to appear; Jahjaga was denied entry by Serbian authorities and ended up giving her talk on wartime sexual violence via videolink. 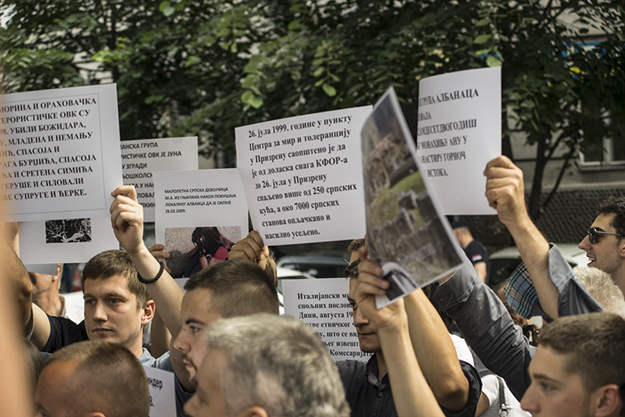 This year’s festival saw protests outside its venues, including members of the ‘Zavetnici’ group. Photo: Valmir Mehmetaj / K2.0.

Two far-right organizations led the protests, ‘Zavetnici’ a pro-Russian extremist group, and ‘Alternativa.’ The protesters swore, spat at, and threatened festival attendees, made accusations of war crimes and organ selling, and sang songs proclaiming “Kosovo je srce Srbije” (“Kosovo is the heart of Serbia.”) “I don’t think that there is a huge percentage of Serbian people who hold those kind of views,” Prusina says about the protests. “I think that most [Serbs] just do not know or are not interested.”

The pillars of the Miredita, dobar dan! festival were founded on this assumption, that the majority of people “do not know” and “are not interested,” but that if a chance was given for them to see the arts and culture of Kosovo, it could create a better understanding between the two states.

Anita Mitic is the director of the YIHR, and throughout her career has weathered many insults, protests, and threats on her life as a result of her work. Despite her experience, Mitic did not expect the reaction the festival received. “When they asked us if we want to take it over, we said: ‘Why not? It’s 2017! Politicians are talking, I mean the biggest news was who was wearing what for dinner in Brussels!’” she explains. “I thought it was not that big of a deal anymore. Oh boy I was wrong!”

“We can not try to cure the bullet wound with bandages, we have to take the bullet out and then start to heal.”

As soon as preparations for the festival began, things hit the wall. “When we tried to put on this play in public theaters, no one wanted to host it. I was like: ‘Why?’” Mitic says. “This festival more than ever has showed me that there is still such a deep division in Serbian society, and how much the wounds of the war are still open.”

Mitic describes her first visit to Kosovo as a real eye-opener. “I always say that it completely changed the discourse of how my life went after that,” she explains. “I started questioning everything that I was taught when I saw how much they lied to me before I went there for myself: about Prishtina and Albanians, and Kosovo etcetera.”

Mitic believes that the truth would bring about healing, but the public in Serbia is not well informed by its media, which makes reconciliation harder. “They are not just kept in dark, they are kept in a lie,” says Mitic. 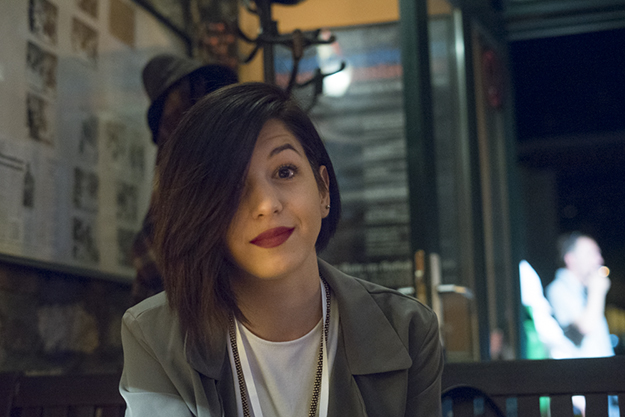 YIHR’s Jovana Prusina suspects that the Serbian state had an influence over how this year’s festival unfolded. Photo: Valmir Mehmetaj / K2.0.

Prusina believes that the government has a strong role to play in the public’s attitude towards Kosovo, as well as the protests. “We try to compare, for example, when they were beating people in the Pride parade several years ago, but last year it was just held normally,” she explains. “That means that at some point the political goal of the state was to let the Pride Parade happen.”

Regarding the Miredita, dobar dan! festival she feels that the approach has changed suddenly because it is a politically opportune moment. “I really don’t feel that all those people who come here to protest, are self-organized,” Prusina explains. “Yes, they do have that nationalistic narrative, they do have that aggressive way of thinking and behaving, but I don’t think they are alone. I strongly believe that they are fully supported.”

Mitic hopes that the culture will soon take center stage. “I wish that the people could accept the reality and enjoy the art, enjoy this brilliant play, or the fantastic music,” she says, referring to a performance of a Jeton Neziraj play (“A Play With Four Actors and Some Pigs and Some Cows and Some Horses and a Prime Minister and a Milka Cow and Some Local and International Inspectors”) and a Jazz concert by the Visar Kuci trio that were both held in the Center for cultural decontamination. “For me it is hard to accept the fact that it will be a long long time before this becomes normal.” 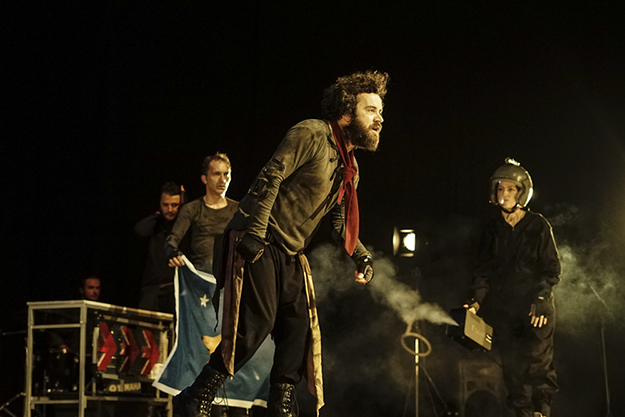 Despite the protests, “A Play With Four Actors and Some Pigs and Some Cows and Some Horses and a Prime Minister and a Milka Cow and Some Local and International Inspectors,” directed by Kosovar Jeton Neziraj, was performed to an enthusiastic reception. Photo: Valmir Mehmetaj / K2.0.

This view that reconciliation will take a long time was shared by Koha Ditore journalist, Sihana Klisurica, who was reporting on the festival for a second time. Klisurica praised the festival for taking a bold stand, showcasing works including the documentary “Albanian girls are our sisters” and short film and Oscar nominee “Shok,” both of which address the 1999 Kosovo war.

However, Klisurica felt that the reaction to the festival showed that the state’s narrative must change, especially due to the amount of young people within the protest, many of whom were too young to remember or even exist in the ’90s. “Their behavior and their continued insistence that Kosovo is the heart of Serbia, makes you think that these ideas are being indoctrinated within them,” concludes Klisurica.

“Maybe these are small steps, like baby steps, but in this way you construct your house, brick by brick.”

Another festival attendee, Vidan Bogdanovic, a journalist and historian, has a more optimistic view of the future. “I think that each year there is progress, and I really hope that after five or six years we can truly say that we know each other’s culture, and I hope that the festival achieves its aims.” A regular visitor of this festival, Bogdanovic says that he does not recall such an escalation of protests, though believes such reactions can be expected because these are very painful things to talk about.

Mitic acknowledges how painful the discussions can be but still believes it is vital to hold them. “We need to open these topics because they will not let us heal,” she states. “We can not try to cure the bullet wound with bandages, we have to take the bullet out and then start to heal.”

As a historian, Bogdanovic believes that time heals and changes relations between everyone. “This is a very good project,” he says of the festival. “It just needs time until its significance starts to be appraised.”

Emel Ajdini is the assistant coordinator from Integra, the organization responsible for arranging the Kosovar end of the festival. She says that from the very beginning there was an interest from the public in Belgrade, to truly see what is really going on in Kosovo, and the arts and culture it produces. “What gives us joy is to see that the number of people visiting the festival is growing,” says Ajdini. “Last year were maybe 700, and this year 1,000.” 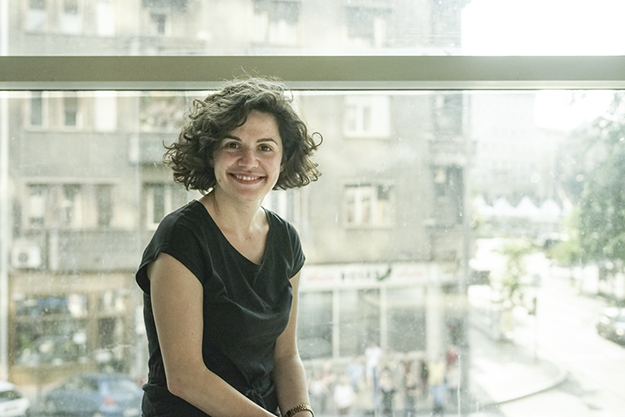 Emel Ajdini helps organize the Kosovar end of the festival, and is encouraged by how audiences have grown. Photo: Valmir Mehmetaj / K2.0.

Ajdini is aware that in a city of 2 million inhabitants, those are small numbers of people, but at least the word is spreading, and she knows that persistence is the key. “Maybe these are small steps, like baby steps, but in this way you construct your house, brick by brick.”

The festival has two integral parts, the artistic element and the discussions that follow. Ajdini feels that these discussions are very important for both countries and societies, as they have never confronted these topics through a genuine and thorough method. “The idea is to bring people that are professionals, that have knowledge in different fields, which are important to be discussed for both societies, even if that is the war,” she explains.

One of the most common criticisms made by the press and the protesters in Serbia, was that the same festival would never happen in Kosovo, a claim which is dismissed as untrue by Ajdini, who says that a similar festival is being organized in Kosovo as well. The Kosovar festival is inspired by Bekim Fehmiu, an internationally renowned actor who was an ethnic Albanian but lived, performed and was educated in Belgrade and has become a symbol of the Miredita, dobar dan! festival.

“Our festival in Kosovo is called “The week of Bekim Fehmiu,” because unfortunately very few know about Bekim Fehmiu, both the figure and his work,” Ajdini explains. In addition to the Bekim Fehmiu inspired festival, she also points to the Polip Festival in Prishtina, where a large number of Serbian artists present their works.

Organizers from the YIHR hope that the need for these type of festivals will only be temporary, and that after a few years the performance of a play by a Kosovar director in Belgrade will be normalized, and without any kind of police presence. It is a phenomenon they have seen happen in the past.

For 10 years, YIHR organized the Sarajevo Festival, which was established to bring contemporary Sarajevan art and culture to Belgrade, as well as to explore sensitive intertwined histories, especially in relation to the Siege of Sarajevo. As with Miredita dobra dan! for Kosovars, the Sarajevo Festival was the only real opportunity for Sarajevo artists to exhibit or perform in Belgrade.

“The situation over the years became more and more normal,” explains Ivan Djuric from YIHR. “One example was Dubioza Kolektiv, this famous Bosnian band, whose concert during the Sarajevo Festival was also surrounded by police.” 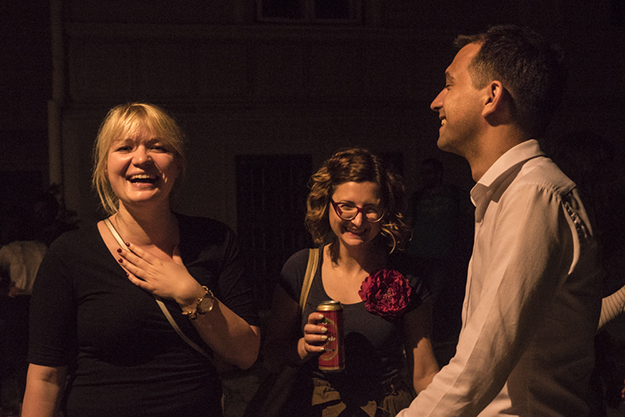 YIHR’s Ivan Djuric (right) hopes that the festival will only be necessary for a few more years, and will help normalize Kosovar performances in Belgrade. Photo Valmir Mehmetaj / K2.0.

In 2015, Dubioza Kolektiv arranged their own concert and sold 15,000 tickets, whereas before YIHR had to “beg” people to come, handing out free tickets to everyone. “That was the time when we as a human rights organization, a regional cooperation promotion organization, stepped out and said ‘Okay cultural workers, now it is up to you, there are no obstacles anymore,’” states Djuric.

He believes that Kosovar and Serbian societies will, in time, overcome all the obstacles that war has left behind, and one day it will be normal to once again “fall in love with someone from Kosovo who is studying in Belgrade” or vice-versa, and that families will accept that. Djuric hopes the festival can speed this process up, “pinpointing people in the right direction, showing them the world we want to live in.”K