A long dark hallway with a cracked concrete floor greets you upon entrance to Prishtina’s Rilindja Printing House. Inside, ominous and gargantuan old printing machinery, a relic of a long since passed technological era, stand tall at the entrance to pitch black toilets, where water constantly drips from the ceiling and cracked pipes. On the opposite wall is a door to a huge hall. Just as gothic as the rest of the building, the cavernous space has no windows.

On Friday night (March 31) the warehouse was dimly lit, and created a psychological setting that chimed in perfect harmony with a performance of “The Dark,” an opera by Luxembourg composer Albena Petrovic-Vratchanska. 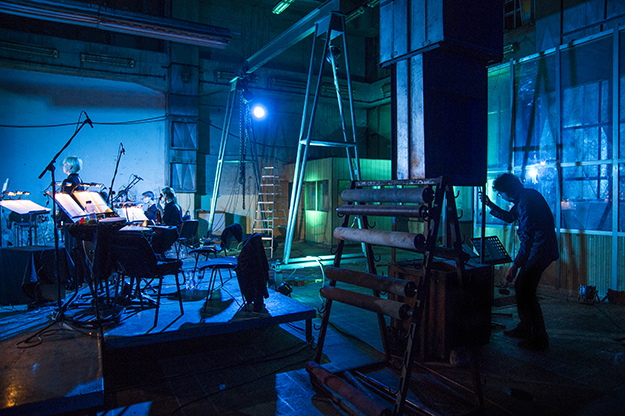 Before the show, chairs lined up in the hall began to fill, as the Prishtina public waited in eager anticipation for a different kind of classical opera. After the introduction, the troupe took their places, and in the half dark hall filled with the scents of rust, damp and old production machinery, peculiar and complex sounds arose from the Luxembourg ensemble for contemporary music “United Instruments of LUCILIN,” before the unpredictable vocals of French musician and soprano, Donatienne Michel-Dansac swirled over the top.

Michele-Dansac was telling an Ancient Greek tragedy through song, a love story between the great lyre player Orpheus and the beautiful Eurydice. The narrative’s language shifted between Bulgarian, English, French, and even Latin. Bulgarian born composer Petrovic-Vratchanska describes the opera as very romantic. “It is the greatest love story from greek mythology,” she told K2.0.

When Petrovic-Vratchanska moved to Luxembourg to study, she found a strong mentor in Claude Lenners, a contemporary classical composer from Luxembourg, who has greatly influenced her music style. 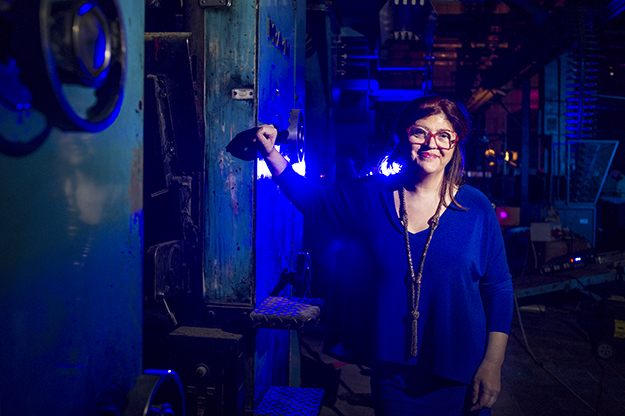 Petrovic-Vratchanska has written more than 600 works in various music genres, but this is her first opera. “We don’t have a stage, or movements, it is static,” she explained. “But through the music, and with the instruments I try to explain all the psychological developments.”

At Rilindja on Friday, sounds emanated from all over, and the most peculiar objects became musical instruments. “Some percussion instruments were coming from the kitchen” said Petrovic-Vratchanska, laughing. She has often said that what she does is new, that she does not copy anyone and that everything she does is original, drawn from her experiences; from what she has read, or who she has met.

“The Dark” at the DAM

The performance of the opera was a celebration of two of Kosovo’s well established cultural festivals, marking both the closing of the 17th edition of Kosovo’s Francophone week, and the opening of the 12th DAM International Music Festival in Prishtina, which runs until Saturday (April 8). 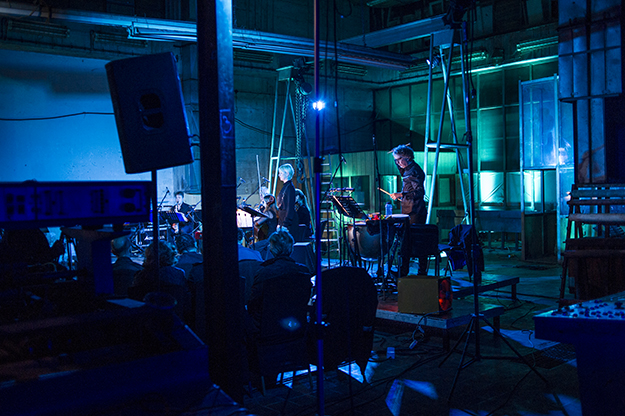 Lejla Pula-Haxhiu, the artistic director of Chopin Piano Fest Prishtina, and a piano player herself, believes that the opera provided a novelty for the Prishtina public. “It was named ‘The Dark’ and truly it gave you the impression of darkness,” she told K2.0 after the show.

Pula-Haxhiu was thankful towards the whole ensemble, the composer, and the DAM Festival for presenting it to the Prishtina public, whom she believes have a strong appetite for attending classical performances, especially when given the opportunity to dive into this “incredibly interesting work.”

"In the time of Mozart people listened to Mozart!" DAM Festival's execurtive director."

“The Dark” was first premiered at Luxembourg Casemates du Bock, a vast underground system of passages and galleries underneath a former castle. It was there that Dardan Selimaj, DAM Festival’s executive director, first saw the opera, which inspired him to bring it to Prishtina.

Selimaj believes that it is really important for Kosovo’s public to get to know contemporary music. “This year our concept is to select works that are written today,” he explained to K2.0. “We need to get to know them better, to listen to them more, in the time of Mozart people listened to Mozart! [Kosovars] are always prejudicial and resistant towards contemporary works, without knowing them, without trying to understand them a little better.”

Selimaj feels that the Kosovo cultural scene often gets stuck in the past by refusing to accept the new. During the Opera, quite a few seats emptied, and afterwards many felt confused by the “eccentricity” of the play, but a great number of people expressed delight as well.

Another reason Selimaj chose this opera was because it was especially written for spaces that are not concert halls. “Taking into consideration that we do not have a concert hall, we also wanted to challenge ourselves to see how we can transform the festival and adapt it to the spaces that Prishtina has, which are good but we do not use them a lot,” he said.

The hall in the Rilindja printing house, was first used by DAM Festival in 2013 for Bekim Lumi’s experimental play “Dilerat” (“Dealers”), a performance somewhere in between a theatrical play and a music show.

Contemporary and experimental music works are the focus of this year’s DAM Festival, especially those that are being held in Klubi i Boksit, the former boxing club turned arts space. “For me the festival is not only to present a certain musical program, but at the same time to work with spaces and concepts,” Selimaj said.

DAM Festival has grown in prestige since its beginnings in 2006. This year, 32 of the musical performances are premieres, and have been entrusted to DAM Festival to convey them in the best manner. “The composer can write a good work, but the manner in which you present it to the public can damage it; so it is a privilege when composers entrust you with their play,” Selimaj stated.

Rilindja Printing House saw a night of eccentric sounds, conceptual instruments and glimpses of the world of contemporary composition on Friday. As soon as “The Dark” was finished, and the echoes of the ensemble, Dansac’s vocals, and post-performance comments faded away, more music began. This time, electronic and contemporary rather than from the classical world. 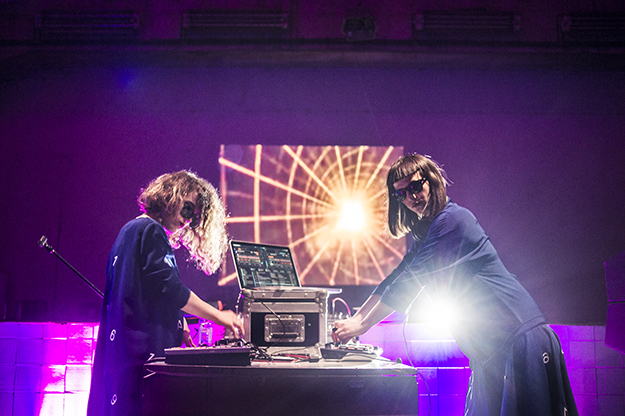 A newly formed duo, “Tandem,” made up of Blerta Kosova and Oda Haliti, absorbed themselves into their laptop and hardware installations, creating harmonious electronic music, accompanied by vocals against a colorful backdrop, to a small but appreciative crowd.

Yet again, an abandoned and unused space in Kosovo proved to have a unique charm, and an ability to become a special venue. An as yet unnamed social movement is enchanting magic from these spaces, making cultural and other events thrive.

Some minds see only ruins in these places and opportunities to modernize them, to turn them into a business opportunity. But there are also those who believe it is people’s minds and hearts that should be modernized, and with a little imagination there is an unspoken promise that Kosovo can just maybe be put on the map with its cool cultural uniqueness.