Democracy? Stability? One year on from the international agreements - Kosovo 2.0
Perspectives | Kosovo

Democracy? Stability? One year on from the international agreements

On the anniversary of two internationally backed agreements with its neighbors, Kosovo appears weaker.

Firm support has been given to both agreements by prominent members of the international community who have repeatedly stated that the deals are not only in Kosovo’s best interest but also in the wider interest of ensuring regional stability; critics often accuse them of prioritizing ‘stability’ over a functioning and healthy democracy. However domestic events over the past year point to anything but a stable political situation, and much of this can be seen to be linked directly to the two deals.

In an attempt to achieve political stability in Kosovo, the international community has consistently put significant pressure on the country’s institutions to press ahead with the implementation of the agreements with Montenegro and Serbia. Just last week, U.S. Vice President Joe Biden flew into town with the key message being that in order to keep its European ambitions alive, Kosovo needs to swiftly ratify its border demarcation deal with Montenegro and continue with the EU-facilitated dialogue to normalize relations with Belgrade.

Biden’s words were just the latest in a long string of pressure from the international community on both of these issues over the past year. The quint embassies — those of the U.S., UK, Germany, France and Italy — have consistently used every opportunity to reiterate their international expectations of Kosovo. 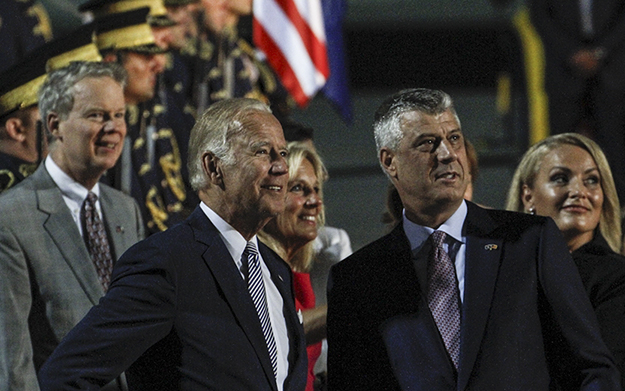 Joe Biden’s recent visit to Kosovo is just the latest example of the international pressure being applied on Kosovo to conclude the agreements with Montenegro and Serbia. (Photo: Atdhe Mulla / K2.0)

Going a step further than mere words of encouragement, ratifying the border demarcation deal with Montenegro has also been inextricably linked with one of Kosovo’s most coveted goals. In May the EU Commission issued its long awaited recommendation for Kosovars to have the same right as their international neighbors to travel visa free in Europe’s border-free Schengen Zone, but conditioned the endorsement with Kosovo first concluding the demarcation deal with Montenegro.

Although the unique move to link visa liberalisation with concluding border demarcation deals has received strong criticism, particularly from Kosovo’s opposition parties, it is a decision defended by the EU. “Experience with visa liberalisation for different countries showed the need to address border [or] boundary management issues as early as possible in the EU integration process so they do not cause an obstacle later,” Maja Kocijancic, the EU External Action Service’s spokesperson, told K2.0.

Despite the strong international pressure on Kosovo, there is a feeling amongst some that the government is pandering to external demands too easily by using the excuse of ‘international obligations.’ Senior government figures have frequently resorted to emotive language, labelling opponents to the deals as ‘anti-American‘ or ‘anti-European,’ rather than engaging in debate about the issues that are raised. President Hashim Thaci recently said that when MPs vote on the ratification of the border demarcation deal with Montenegro they will be choosing between “isolation and integration.”

Besa Shahini, an independent policy analyst based in Prishtina, believes that the government is using international partners for their own agenda. “The government enlists the power of the international community to pressure everyone into simply accepting the agreements,” Shahini told K2.0.

A further accusation that has been leveled at the two agreements is that their strong backing from the international community has served to bypass democratic values and debate in Kosovo. The agreements were signed without any debate at home, fueling frustration and confusion about what exactly they entailed.

One year on, neither has been voted upon by the Assembly, although the border demarcation agreement will go before deputies next week. It took 11 months for a full debate to be held in the Assembly on the Montenegro deal, which stretched to a marathon 12-hour discussion when it eventually took place earlier this month; all political parties took part, but unusually, so did a number of international actors, including U.S. Ambassador Greg Delawie who put pressure on deputies to move the issue to a vote, arguing that the agreement would serve better “neighborly relations.”

The Association agreement with Belgrade has also raised its own questions of the extent to which Kosovo’s democracy is being respected. In December, the agreement was sent to the Constitutional Court by former President Atifete Jahjaga to clarify whether it is in compliance with the country’s Constitution. The Court ruled that it was “not in the full spirit” of the Constitution and would contravene it if enacted in its current form but that it must be pursued regardless. 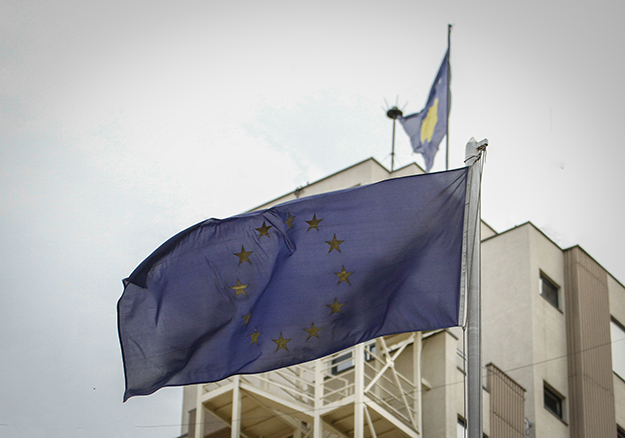 The EU has reaffirmed its position that Kosovo should press ahead with implementing all agreements made with Belgrade, including the Association/Community of Serb Majority Municipalities. (Photo: Fikret Ahmeti / K2.0)

By suggesting that Kosovo’s multiethnic character would be jeopardized if the agreement entered into force, the Court’s ruling threw into question the coherence of the international engagement with Kosovo. The EU and U.S. have been the biggest promoters of a multiethnic state in Kosovo, but despite the Court’s finding both have insisted that Kosovo pushes ahead with implementation of the Brussels-brokered agreement regardless. “Intensive work continues on the implementation of all EU facilitated Pristina-Belgrade Dialogue agreements, including on the Association [or] Community of Serb Majority Municipalities,” stated Kocijancic, when asked if the EU was minded to re-evaluate its position.

Shahini argues that such an approach from the international community demonstrates that it is primarily concerned with serving its own agenda, with little regard for the impact on Kosovo’s democracy. “Kosovo should get things done, quickly, quietly, in a way that makes the neighbors happy and keeps the Balkans stable,” she says, summarizing what she believes are the international community’s intentions. “These two agreements will be implemented only if there is a serious breach in the democratic process.”

Accusations that the international community values stability over a functioning democracy in Kosovo have long been made. However the extent to which these deals are achieving even that is in question — the past year since the signing of the deals with Montenegro and Serbia has been the most tumultuous since Kosovo declared independence in 2008. 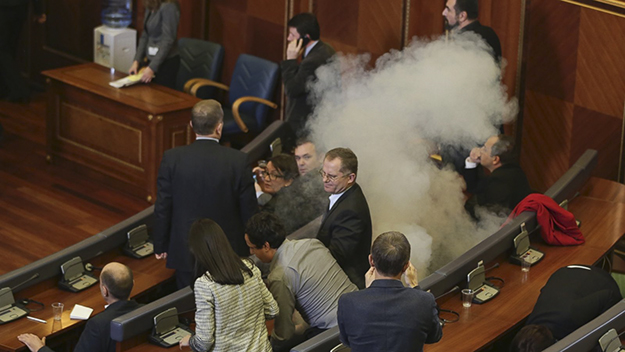 Kosovo’s Assembly has been effectively paralyzed for a year since the international agreements were signed, with opposition deputies regularly releasing tear gas in the chamber.

A political deadlock between government and opposition, triggered by disagreement over the international agreements, has been ongoing throughout this period and parliamentary life has effectively become paralyzed. The word ‘parliament’ has its origins in the French verb ‘parler’, to speak, but instead of parliament’s chamber, corridors and yard being filled with debate and compromise, they have instead been replaced with tear gas, arrests of opposition deputies and derogatory language that have served to render the Assembly dysfunctional.

Eventually, in March 2016 the opposition parties — Vetevendosje, AAK and NISMA — abandoned the Assembly as an expression of discontent with the two agreements. Vetevendosje has subsequently decided to return, although it has vowed to disrupt the September 1 session where the Montenegro deal is due to be voted on. A popular protest has also been called in Prishtina on the day of the vote. 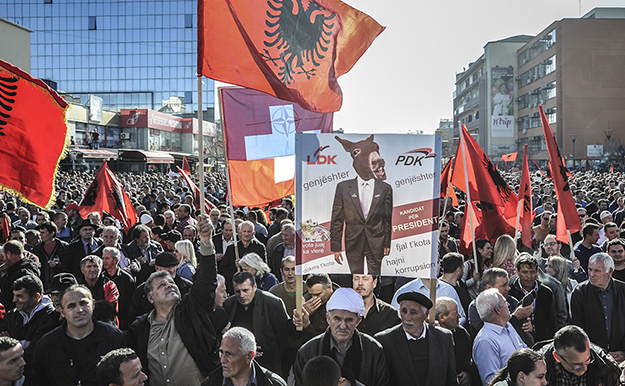 Opposition-led mass protests against the agreements with Montenegro and Serbia have been the largest in post-war Kosovo. (Photo: Atdhe Mulla / K2.0)

Opposition-led protests to the agreements with Montenegro and Serbia have attracted tens of thousands of citizens over the course of the past 12 months — the largest protests in post-war Kosovo. While the overwhelming majority of protesters have been peaceful, there have been occasions where these mass rallies have ended in violent scenes.

The feeling that Kosovars are having agreements imposed upon them from outside, the harsh division between the government and the opposition and the unconventional tactics used to disrupt institutional life over the past year, threaten to set an unstable precedent for expressing discontent in Kosovo.

In contrast to Shahini’s views, Andrea Capussela, head of the economic unit of the International Civilian Office (ICO) from 2008 to 2011 and author of “State-Building in Kosovo: Democracy, Corruption and the EU in the Balkans,” suggests that the two agreements are only a facade masking deeper problems. “The real causes of instability are Kosovo’s bad socio-economic conditions, and a political elite that is plainly unable, and also unwilling, to do anything to improve them, and tries to suppress democratic debate instead.”

It is well reported that Kosovo suffers from endemic corruption and organized crime, an assessment borne out annually by the European Commission Progress Reports. More tangibly, institutional nepotism, abuse of power and the self-serving nature of those right at the top of Kosovar politics are currently being unveiled by the ongoing release of leaked wire tappings made during a 2011 EU Rule of Law Mission (EULEX) investigation into ruling PDK party figures; no charges were brought at the time.

For Capussela, the Western powers need to change their approach to how they conduct their engagement in Kosovo. “The most useful thing that the West can do is to simply stop supporting the current elite to protect it from political and legal accountability,” he says.

Whether a facade or not, a year on from the signing of the international agreements with Montenegro and Serbia, nothing has been resolved. For now, the international community’s hopes that the deals will boost democracy and cement regional security in the long term can only be the subject of speculation. However in the short term at least, Kosovo’s democracy and stability appear to be more damaged than enhanced.