A theater of industrial archaeology  in Tirana.

Turbine (Skena e Re) is like an open excavation site, harmoniously setting the stage for Sadik Spahija’s post-apocalyptic scenography, “Vox Machina.” Tirana’s former power station, recently inaugurated as a multipurpose art space, is still under construction, the full program or concept yet to be revealed. When entering through the path of construction materials and a makeshift carpark, visitors are faced with large-scale industrialist sculptures that take the formal aesthetics of heavy machinery as a starting point.

Moodily lit with gentle industrial sounds (composed by Hajg Zacharian, Endri Sina, and Ramazan Gurra) emanating from walls, objects, and a DJ booth at the entrance. The space replicates the damp, dark sites Spahija must have encountered when mining the ruins of Albania’s twilight of industrialization for the exhibition. The artist, a professor at the Academy of Arts Tirana, is known for his bronze sculptures — often conservative governmental commissions — and has recently pushed into abstraction, with “Vox Machina” being his largest scaled articulation yet. 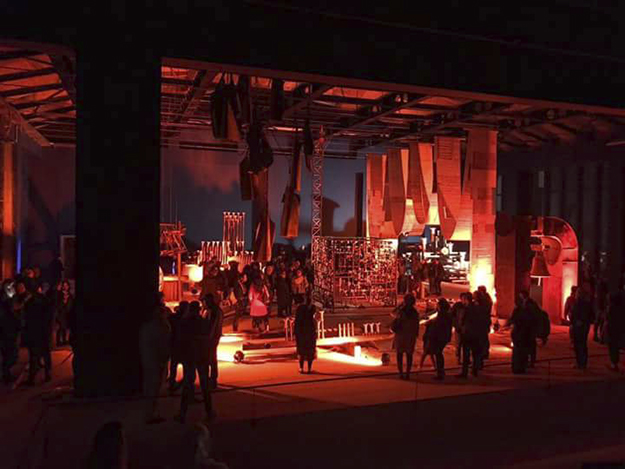 For the exhibition, Spahija has surgically remodeled tubes, pipes, sheets of rusted metal, gears, and even original blueprints and construction documents. He stacks them and hangs them and glues them and solders them, and, most sensitively of all, extends them. Unglazed ceramic prosthetics are attached to the ends of pipes and pulleys, some replicas of industrial parts and others horn bells, turning them into hybrid sculptural musical instruments. They are not only machines with new bodies; they are now invested with a voice.

But as visitors wander the industrial hall, they soon realize that this factory is no longer for industrial production but a space for theatrical production. Evidence of this is strewn about: the blueprints (draping dramatically from the ceiling as if extruded from a printer) are joined by scattered documents bearing the label “Otto Infeld – Kunstler Seil-Saiten,” Vienna’s foremost producer of violin strings, far predating the Chinese engineers’ plans for Albania.

Time here indeed seems lost. Many of the instruments are reminiscent of Gothic church organs, others like trumpets or classical violins, and while the factory aesthetics dominate, visitors are brought out of their industrial reverie through dancers clothed in nude underwear—primordial costumes stripping them of their sociopolitical positions. 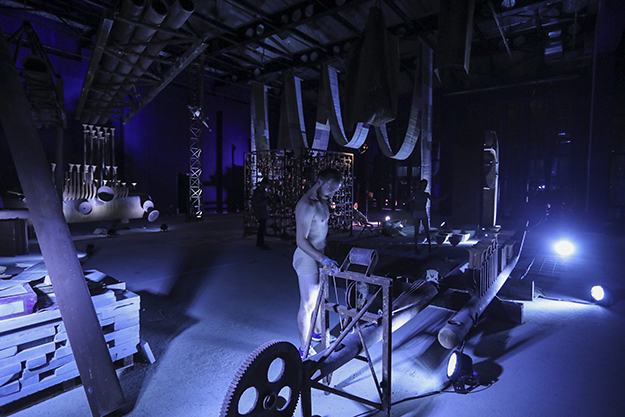 The new factory worker? Choreographed by Gjergj Prevazi, much of their movement seems freed from the automation of the machines — they irreverently improvise, playing the factory in a cacophony of sounds and movements. Chaotically occupying the whole landscape, our attention is grabbed not by their athletic movements but by the timed theatrical spotlights at the feet of the machines. Warm yellows and phosphoric blues flicker, creating a theater where no theater needs to be. Relegating his rusted sculptures to the realm of prop, and visitors to that of entertainment-hungry audience, the installation-turned-theater distracts.

The speakers embedded in the machines confirm that in fact the factory doesn’t need the human to be played; it plays itself. By using strategies of entertainment uncritically, the artist undermines the artistic project and confuses interpretation. Making spectacular that which is poetic, time and history—the very act of interpretation—are subsumed. In the desire for monumentality, the essential is marginalized, lost on the factory floor.