Dezso Mate: I don’t like the word taboo because it indicates there are topics that society doesn’t want to acknowledge - Kosovo 2.0
One-on-one | Roma

Dezso Mate: I don’t like the word taboo because it indicates there are topics that society doesn’t want to acknowledge

Budapest-based researcher talks about how his experience as a gay Roma man has fueled his fight for acknowledgement and change.

As a gay Roma person, Dezso Mate’s own life experience triggered him to dedicate a good amount of his time to researching intersectionality and different forms of oppression.

“The Roma humiliated me because of my sexuality, and sometimes I’m excluded from the LGBTQI [Lesbian,Gay, Bisexual, Transgender, Queer, and Intersex] community because I’m a Roma,” says Dezso.

In December 2018, at the annual Civil Rights Defenders’ Roma Summit in Prishtina, he shared his life story as an illustration of the impact of the intersection of different identities. His mother died when he was six after she had been told that she was pregnant. It later turned out that it was a misdiagnosis; she wasn’t pregnant, she had cancer.

“She felt something wrong in her body. But she wasn’t pregnant,” he says. “She died because of a social system that reinforces stereotypes, like that a Romani woman going to hospital should be pregnant. Not that my story [alone] is important, but thousands of people are in my position whose voice need to be heard. Now, I am lucky to talk about this issue, but it is only one [voice].”

Mate is a consultant with the Open Society Foundations Community Youth Fellowship, which is focusing on the intersectional challenges in public health care settings for Roma LGBT people. Based in Budapest, the 34-year-old is a doctoral researcher at the Eötvös Loránd University Interdisciplinary Program at the city’s Faculty of Social Science. The main focus of his doctoral research is on the multiplied intersectional discrimination against Romani LGBT people.

He was one of the most prominent speakers at the recent Roma Summit, where K2.0 had the opportunity to meet him and discuss his research on the subject, and his efforts to fight oppression by shedding light on the stories and realities of those marginalized in more way than one. 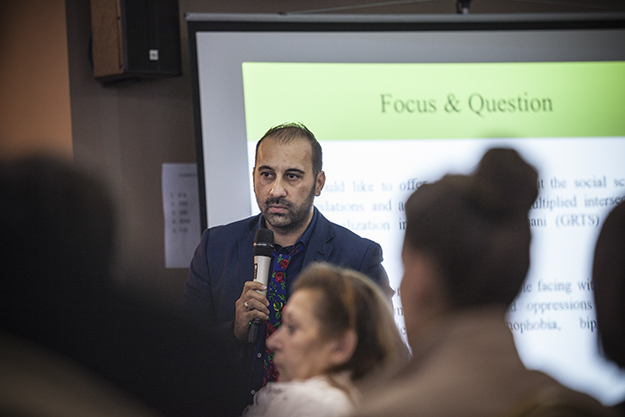 K2.0: Tell me more about your doctoral research on intersectional discrimination of Romani LGBT people?

I did 50 interviews with Romani intellectuals, and those included people who are part of the LGBTQI group, and I started to have an interest in their identity. I was introduced to the concept of intersectionality. I found out we are facing different oppressions from society, from both within and outside [our groups].

There are double sources of oppression in our life. For example, there is social power, which is usually a male dominated power and affects not just the LGBTQI community, but also women, people with disabilities, etc., and we just don’t talk about this.

I had an interview with a gay Romani man and asked him, “What is your biggest fear?”

“My biggest fear is that I am existing,” he said.

That is just so scary, to hear that sentence, that his biggest fear in his life is that he exists, because he doesn’t find or cannot find any support from our [communities]. Romani groups are transphobic and homophobic, and xenophobic as a majority, and at the same time, the LGBTQI community excludes Romani people. They exoticize them, eroticize them, or there is a concept of orientalism — for example, a Romani woman has to dance and sing.

How often are the stories of people facing multiple forms of discrimination being heard?

Their answers always included those labels, which they hear from the majority of society. Of course, there are some basic symbols, too — for example, the language is our cultural heritage.

We can mention music and dance, but it is kind of an orientalist approach that is ethnographic and anthropological. It’s harming Romani knowledge production and changing the narratives of Romani identity because if you are always talking about different ethnographic studies and talking about the Romani people in ethnographic discourse, it [harmfully simplifies a complex subject] because there are other issues, as well. For example, why are we not talking about Romani feminism? Or the sex work of Romani men and women? These are existing issues, too. 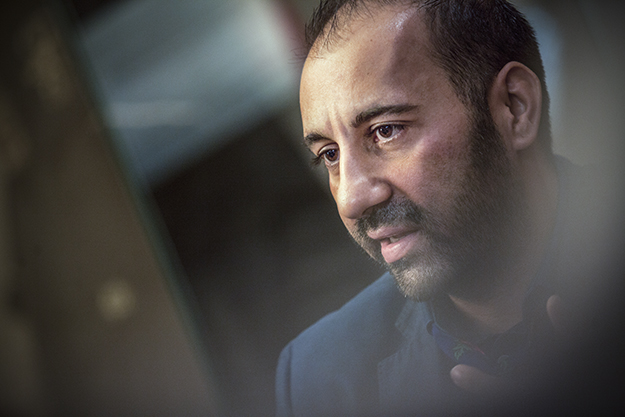 Maybe it’s a taboo to talk about it, but I don’t like the word taboo because it indicates that there are themes and topics that [society] doesn’t want to acknowledge because they are considered to be shameful. [Not talking about ‘taboo’ issues also shows us] who is leading the discourse, and why the discourse is being limited in the way that it is, to topics like housing, education and health.

These are super important things, of course, but these are just the tip of the iceberg, and there are many other layers to the Romani community that we aren’t talking about. For example, if there is a Romani woman who is suffering with a disability [and therefore facing multiple forms of discrimination], what should we do?

What can be done to shed greater light on the multiple layers of Roma identity? How can we help change the  societal discourse to make it more representative?

In one research project, my focus was on the difference between Roma generations. The first generation [I interviewed was born in the 50s], the second was [born in] the 70s, and we are the third generation.

My question to them was, “Why didn’t you talk about intersectionality, feminism, or LGBTQI issues in the past?” The answer was easy — at that time, they first had to prove that they existed as a group.

They had to prove the Romani identity, they mentioned the social system that didn’t accept them as a group or ethnicity, and that was the main point for them — to get recognition for their existence as Romani people, and the recognition that they have needs. First, they had to draw the attention of the decision makers to the lack of education, lack of housing and lack of access to health care.

OK, these are the first steps, but times are changing and now there are new narratives. But we are here, and we have to talk about new issues with them, together.

"Not talking about ‘taboo’ issues shows us who is leading the discourse, and why the discourse is being limited in the way that it is."

Your work brings attention to intersectional discrimination and its impact. Does it lead to  double harm and a shrinking space, as marginalized people struggle to find their acceptance and comfort within the Roma community on one hand, and the LGBT community on the other? What is the extent of the impact?

I can mention two cases. The first case is from Budapest Pride, organized in recent years. Basically, a group of Romani transgender people tried to enter a Budapest pride after-party, but the security refused their entrance so they were unable to enter the party and weren’t given any kind of explanation. They took the case to the authorities and it was reported in the media as well.

There is the psychological violation, and there is physical violation — which also happened in Budapest. A Romani queer guy was harmed, physically beaten while on public transport, and had his nose broken and was bleeding. He went directly to the police and reported the case. The police questioned how the person could be gypsy and faggot at the same time.

And so the discourse is stopped because they don’t understand it. They’ve never been faced with this issue, because [they perceive Roma to only exist as beggars in the street], Roma stealing from the shop, and this was a case that they had never met and they just didn’t understand.

Again, if there is a case of a person being physically violated then the court has to understand if the person was beaten because of their sexual orientation, or gender identity or Romani heritage [or all three]. It is a huge deal, so our decision makers, policy recommenders, high intellectuals that don’t understand this, there is a need for the recognition of these people, that they are beaten up [not because of one piece of their identity, but because of multiple facets]. 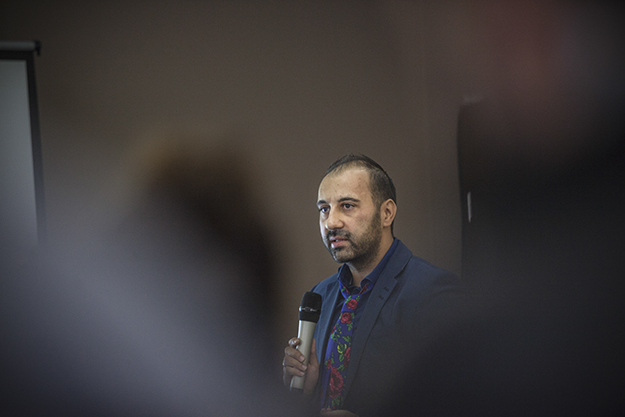 Does this mean that the discrimination of the main group has overshadowed other forms of oppression?

The main issue is that this is a patriarchal system, and it doesn’t matter which movement it is — LGBTQI or feminist — to refer to Foucault, every oppression or every kind of marginalized case persists because a patriarchal system [allows it to]. They think they have the right to do whatever they want to do.

This is the main issue. They think for themselves and we judge others by their social status, by their gender, and this is how our system fails. This is my criticism.

"We judge others by their social status, by their gender, and this is how our system fails."

I remember in an interview with a Roma activist last year, she criticized NGOs for not tackling discrimination within the community itself, which, she said, contributed to political correctness but created further problems within. How do you see this?

This is one of the main problems. Like there are these huge institutions and donors giving money to different projects, but they never support intersectional cases. They support Romani women’s rights, after 20 years of fighting for equality, but the main focus is still on general Romani issues.

For example, there are no projects initiated on fighting Romani LGBTQI issues, and [that’s] my main point and criticism.

Again, back to the role of power and position, which are in the hands of older generations who are kind of — I am against ageism — but they have stopped the discourse. They don’t change the narrative and they are happy with their work, and they don’t write or initiate projects on intersectionality, like Roma LGBTQI, Roma people with disabilities. Grassroots [organizations] don’t initiate them either; it’s a huge topic, but within the theme of education we could integrate or include the topic of, let’s say, the LGBTQI community — educate the system about LGBTQI rights, or women’s rights.