When the K2.0 team visited “Guardians of Paradise, the hearts and minds of North Korea” exhibition at Pjetër Bogdani National Library in Prishtina, coincidentally we heard a conversation between three or four friends. Initially, the friends tried to enter one of the offices on the second floor of the library, but the door was closed. They stopped to wait, and perhaps to kill time, they started to discuss the exhibition.

The most vocal one of the group took charge of the conversation. He started to discuss the dictator Kim Jong Un, and then asked: “What are these Chinese guys doing here?” referring to North Koreans. While the others laughed, in what was one of the few interruptions of the babbler, one of his friends said: “Bro, it says North Korea here.”

“Whatever, aren’t they the same?” answered the first guy, and continued to comment on the close ties that Albania and China had 40 years ago, highlighting the name Enver Hoxha, following every sentence with the question: “But for what?” — as in, what did he achieve? He no longer listened to his friend’s question, now his attention was attracted by a North Korean military uniform for babies — he was enthused by it.

We are not at all convinced that the group of friends didn’t know the difference between the two nations. Perhaps they noticed that we are journalists — maybe from our equipment — and were purposely being sarcastic in front of us, or perhaps they were cynical towards the exhibition. Or maybe they didn’t want to distinguish Chinese people from North Korean people, even though they knew the difference.

Those young men weren’t the only people that had something to say about the cinematic company Traavik.Info’s photography exhibition, that was exhibited from October 31 to November 11 at the Hall of the National Library. The exhibition — courtesy of Morten Traavik and Jørund F. Pedersen — displayed moments from North Korean daily life, a country that was visited more than 20 times by the authors.

Traavik’s documentary film, which covered the Laibach concert in Pyongyang, was screened after the exhibition in Prishtina.

In one of these visits, when director Morten Traavik organized a concert with the Slovenian band Laibach in 2015 — the first performance of a Western band in this country — a satirical official reception ceremony was organized for him and the band by the Head of the Committee for Cultural Relations, Mr. Ryu.

During the ceremony, Mr. Ryu described the industrial rock band as terrible, offensive and Neo-Nazi, since their clothes are similar to those of Nazis. From its founding in Yugoslavia in 1980, Slovenian band Laibach made a name for itself with parodies of totalitarianism, nationalism and militarism, as well as by using controversial images in their artworks.

For Mr. Ryu, it was unacceptable that the Democratic People’s Republic of Korea (DPRK) – an antifascist country that fought against imperial Japan, former allies of European Nazis and Fascists – invited this band to perform at its capital in the 70th anniversary of its liberation.

Traavik’s documentary film, which covered the Laibach concert in Pyongyang, was screened after the exhibition in Prishtina. In conversation with Traavik after the screening, he was as controversial as usual, although he presented himself as hurt by the reactions he elicited here with his work.

Portraits of North Koreans next to portraits of Albanian Renaissance figures

Next to the entrance of the National Library they placed a quote by Kim Jong IL, former supreme leader of North Korea: “National literature that is stripped of the spirit of national independence, is nothing but a body without a soul.”

As you enter the interior of the library, on the side you see a quote by the writer Milan Kundera, commenting on the beginnings of totalitarianism and the creation of a totalitarian society: “Just as the dream of paradise turns to reality […] here and there, people start to place obstacles in this path, and as such the leaders of paradise must build a small gulag by Eden. With time, this gulag is continuously enlarged and perfected, while the neighboring paradise becomes smaller and poorer.”

These materials from North Korea elicited strong reactions from critics, who mainly saw the exhibition as promotion of a dictatorial system and its leaders.

On the second floor there were photographs, brochures and other stuff that presented North Korean life. Above all, there were two large photos of two former North Korean dictators: Kim Jong Sung and Kim Jong IL.

Ah, and let’s not forget Ismail Kadare’s quote: “The relations of a great writer with a dictator are complex and difficult to explain, because they are both tyrants, but in this confrontation, the dictator is a false tyrant…” 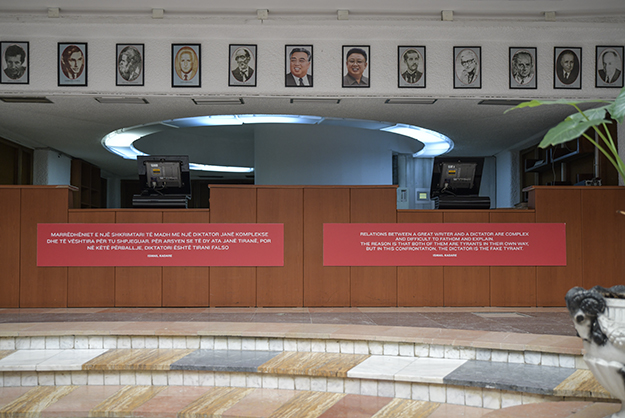 These materials from Korea elicited strong reactions from critics, who mainly saw the exhibition as promotion of a dictatorial system and its leaders. It was noted that this exhibition was held next to the portraits of Albanian National Renaissance figures, who were long-standing residents of the Library hall.

University professor Blerim Latifi commented on the exhibition on Facebook. “A friend of mine told me, but I didn’t believe him! I went to see it for myself and it was true,” he said. “It is a reality. On November 5, 2019, in Kosovo, in the institution that was established to contribute to culture and freedom, one of the dirtiest dictators that the world has known is being promoted.”

Traavik is surprised with the response.

In fact, he believes that many of those who responded — who he describes as people “with close ties to current or past structures of power in Kosovo” — did not even come to see the exhibition, and that their reactions were exploited by the media, which didn’t bother to show the other side of the story.

He believes that the exhibition was misunderstood due to misinformation, and blames the media for this. “The media have uncritically broadcast them [the reaction] in their purest form and to me this is quite problematic,” he says. For him, this kind of reporting is dangerous, because the media should be “one of the few areas of diversity, where diversity is possible — especially online media.”

Although in the beginning he thought that the reactions came as a result of the exhibition being misconstrued as a promotion of the North Korean regime, Traavik later changed his mind. He continues to blame the media for inciting these reactions. Traavik says that he is surprised because it is the first time that he wasn’t contacted by the media, even though he was ready to discuss each piece of criticism directed towards him.

As for his work — which he calls an experiment — Traavik believes that it should not elicit a debate about whether North Korea is “good or bad,” rather it should incite people to consider whether or not they have self-censorship tendencies. He connects this to the lack of response from arts critics; Traavik says that he spoke to some of his friends who agreed with his work, but were silent. He calls this “the silence of good people.”

“In fact, even in a country like North Korea - although naturally they are much more controlled - you don’t need two million policemen to supervise people, because they are censuring one another.”

“Self-censorship can have two forms: You can stop yourself from saying something because you don’t want trouble, or, in a way, it is by now so deeply ingrained in your system, that you don’t even think about saying something,” says Traavik. “In fact, even in a country like North Korea — although naturally they are much more controlled — you don’t need two million policemen to supervise people, because they are censuring one another.”

However, professor Latifi doesn’t agree with this. In a second Facebook post, he said that exhibiting photos of North Korean dictators cannot be relativized by saying that this is freedom of expression or a work of art. “In the normal democratic world, content that is contaminated, be it physically or ideologically, is exhibited with critical explanations.”

“The summary of Milošević’s speeches cannot be published without critical explanations on the consequences that these speeches had,” Latifi went on. “If this is not done, than the exhibition of dangerous content is just marketing for the content. Just like the banner with Kim Jong IL’s sayings on the external walls of the National Library.”

From Pyongyang to Gjirokastër and then to Prishtina

Before bringing it to Prishtina, the authors took the exhibition to Gjirokastër, the birthplace of Albania’s former dictator Enver Hoxha.

According to Traavik, the fact that the exhibition was initially organized in Gjirokastër and received positively — even though Albania suffered so much at the hands of the communist regime — shows that it did not promote the North Korean regime.

“You know about Albanian communism, and I would have been less surprised in a way if I would have received this type of reactions in a place like Gjirokastra, because after all Albania was the country which resembled North Korea the most in comparison with other European countries. But this didn’t happen. On the contrary [they liked it there],” he says.

Traavik insists that people who have lived in a system similar to North Korea did not see it as promotional artwork, and says that he expected the same in Kosovo.

Art critic Ilir Muharremi labelled the exhibition  “disgusting,” adding that this kind of art is outdated, and that the “world of the Balkans” is fed up with it.

According to him, “…the portraits show buxom proportions, pathetic and muscular women in military uniforms, parades with unbelievable uniformity in movement, children in red scarves in the most isolated country on earth. They resemble pictures and sculptures of Albania during the reign of socialist realism.”

Muharremi says that that time no longer exists, and to him it is not clear what the artist attempted to express. According to him, this exhibition is a lukewarm provocation, and shouldn’t have been displayed in the National Library.

Traavik says that it is not for him to say whether or not the exhibition was a “provocation” or an “excessive provocation.” As for the location he picked, he highlights that he is always in search of “spaces for demonstration which have not yet been corrupted by art” to exhibit his work in, and he continuously strives to find alternatives to art galleries or theater scenes. 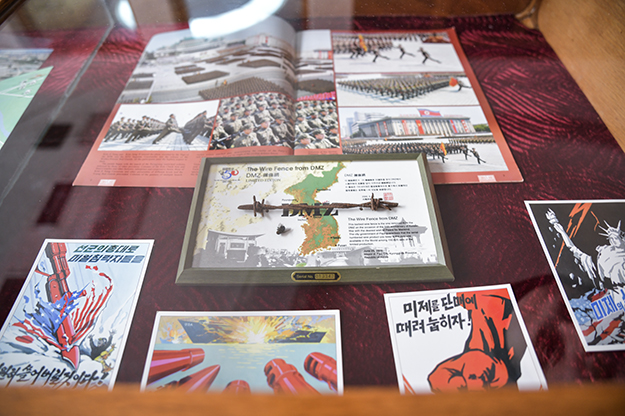 “In my work, I always like to fuse or separate the work from external circumstances. For this reason, the National Library was suitable in many ways — it is a national institution, so I assumed that it has some kind of symbolic element,” says Traavik. Moreover, for him, “the library is a guardian of the past and a place to find inspiration for the future.”

The exhibition was followed by reactions, opposition and calls stating that it was propaganda or promotion of a regime which has nothing to do with Kosovo. However, in it there was something from Kosovo: A dead fly which Traavik found as they were cleaning the drawers in which they would place some of the materials, which he decided to include in the exhibition about North Korean realities. K