Doing it yourself - Kosovo 2.0
Monographs | Activism

How Liga Total brought football to cities without municipalities.

Ever since Dardan Saraci and his friends started organizing street football matches, Sunday has been football day in Lipjan. On this day, the people that usually frequent the city’s cafes now prepare for football — either as players or as spectators.

Twenty-four-year-old Saraci proudly explains how cafe owners often tease him and his friends, saying that they’ve taken over Sundays in Lipjan. “They come and hang out ’til 11 but then everyone leaves!” they joke.

Four years have passed since Saraci and his friends channeled their passion for football into organizing an amateur street football league in their city, which they call ‘Liga Total.’ Since then, similar leagues have been organized in other cities, including Ferizaj, Mitrovica, Kacanik, Kamenica and others.

What unites them, besides a passion for football, is their attempts to address the absence of things for young people to do in their respective cities. 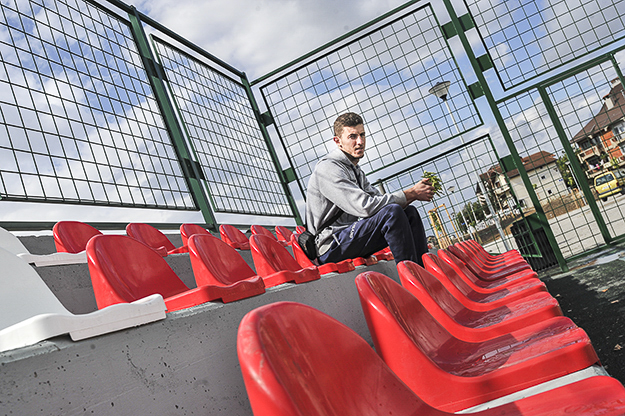 According to a report published in 2016 by the International Foundation of Election Systems (IFES), 73 percent of young people, aged under 25 in Kosovo, have never been involved in any cultural, political or sports events. In the report, members of civil society highlight that the lack of youth engagement in these activities is caused by a lack of adequate spaces for organizing them.

The Law for Empowering and Including Youth was adopted in 2009 so as to create opportunities for involving young people in these kinds of events, and lays out obligations for both the central and local levels of government.

The law obliges the Ministry of Culture, Youth and Sport, to develop, adopt and implement a strategy in cooperation with the local level. Local institutions meanwhile are responsible for providing financial and human resources for implementing youth programs, while municipalities must provide adequate public spaces for youth activities.

In order to ensure young people are involved in developing these activities, the Youth Action Council (YAC) are tasked with helping to provide research for local institutions, to help them improve the situation.

But regardless of all this legal regulation, institutional obligations often remain unfulfilled, and as a result, youth organizations are neglected. But this has not stopped people from working outside of the system, like Saraci and his friends, who organize activities themselves with no institutional support.

The group behind Liga Total have been passionate about football since childhood and for many years played every week. But by 2013 their ritual had become something of a routine. To break it, Saraci and his friends sought out new sporting challenges.

In just a few weeks, the search produced results and soon they started to test their abilities against four other teams in Lipjan, against which they had never played before.Their spontaneous initiative attracted a lot of people and within a month, three divisions were created, each having 16 teams.

“When we saw that the number of teams was growing, then we understood that we had initiated something important. Realizing this, we also became more dedicated, so that everything would run as smoothly as possible,” Saraci says.

At the end of September 2017, Liga Total began its fifth season. Currently, around 600 young people are engaged in it every week. They have managed to recruit referees, book the pitch on a long term basis, provide physiotherapists and photographers, and form a commission that sets the timetable. The teams even have their own leadership hierarchies, coaches and sponsors.

With the event being so well-organized and the teams almost at a professional level, it quickly attracted a lot of spectators. The number of people who come to support their respective village teams is as big as it is in matches played between professional clubs. Some matches in the amateur league have been attended by more than 1,000 people.

Liga Total has also attracted the attention of local businesses, which have considered the matches to be good marketing opportunities. In fact, the only financial support that has been given to the organizers and teams came from local businesses.

“Some businesses have invested over 12,000 euros over a period of six months,” Saraci says. “In some cases players are paid 100 euros per match.”

Such income is significant for young people, especially considering the fact that unemployment levels among the youth reach 55.9 percent, according to the Kosovo Agency of Statistics.

In 2014, Liga Total was organized in Kacanik, with the same format that was used in Lipjan. Its communication chief is 19-year-old Shefket Dashi. He says that he wanted to be involved with the league because of his love for football, and the lack of opportunities to play in his city.

This lack of opportunities largely comes from a lack of facilities. In 2015, the Ministry of Culture, Youth and Sport initiated a project for building a sports hall in Kacanik and invested over 700,000 euros in two separate phases. According to its webpage, construction should have been finalized by the beginning of 2017.

However, there were delays in the construction of the 3,000 square meter hall, which will eventually include areas for playing football, handball, basketball and other sports. The Director for Education and Culture at the Municipality of Kacanik, Enver Kamishi, told K2.0 that they hope that cooperation with the ministry will mean that this project is finalized next year, but gave no further details on when it is likely to be completed.

It is a situation that has left the youth of Kacanik with very little access to sport. “With the exception of a few annual events, which are organized by the high schools, this city lacks sports activities,” Dashi says.

Liga Total in Kacanik manages to survive with payments of just 15 euros made by each participating team for every match played. Instead of having local businesses sponsor the teams like in Lipjan, in Kacanik this role is played by the diaspora. 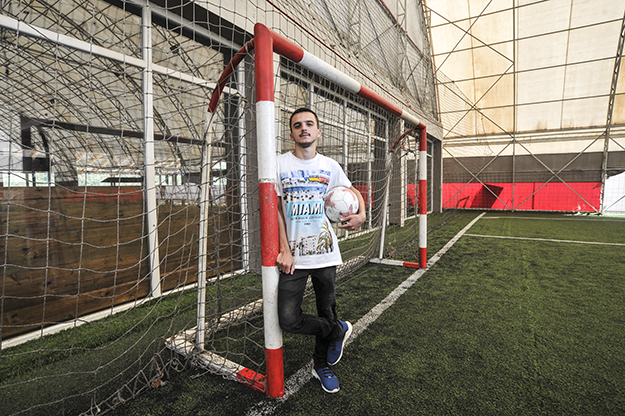 Shefket Dashi has helped spread Liga Total to Kacanik, where he insists it has become more followed than the local professional team. Photo: Atdhe Mulla / K2.0.

Dashi continuously speaks about the great success of the league, saying that people in Kacanik follow the amateur league more than the local professional team, KF Lepenci.

Meanwhile, the league in Lipjan did not receive support from the municipality until four years after its establishment. This summer, it was allocated 1,500 euros, which was seen as a triumph by the organizers, who hope it will continue.

In Kacanik, because of a lack of municipal support for the league, 30 teams were unable to carry on competing. According to Dashi, this has forced them to close two categories. He thinks that some of the teams left because they had no funds, and believes that with a little help from the municipality — around 500 euros every six months — they would have been able to keep these teams in the league.

The Liga Total organizers are convinced that they can get many more young people playing football with the help of the municipality. Saraci has registered the league in Lipjan as an association, making municipal support easier, from a legal standpoint. Both municipal regulations for allocating local budget and the national Law on Sport focus on activities which make sport available to the masses, something which surely applies to Liga Total.

Basri Hashani, Head of the Culture, Youth and Sports Department at the Municipality of Lipjan, says that the department was aware of Liga Total but were initially sceptical. He is still somewhat withdrawn, as he believes that “such leagues are not preferred,” alluding that it is better to play matches in closed football fields during winter time.

He suggests that young people should look at opportunities to be involved in established local clubs. However, these clubs usually have 25 players each, making it impossible for them to include all football enthusiasts. Also, the clubs’ main focus is on developing professional footballers rather than giving people the opportunity to play. 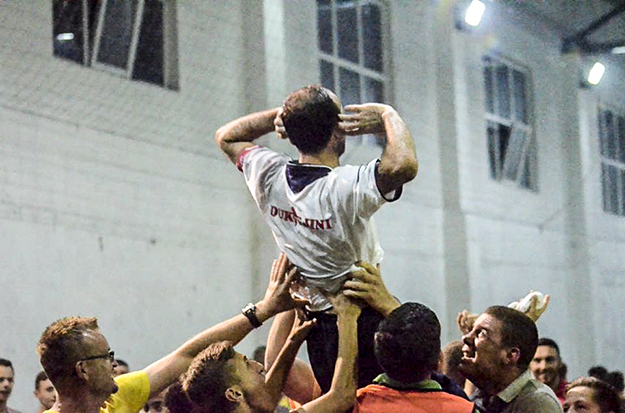 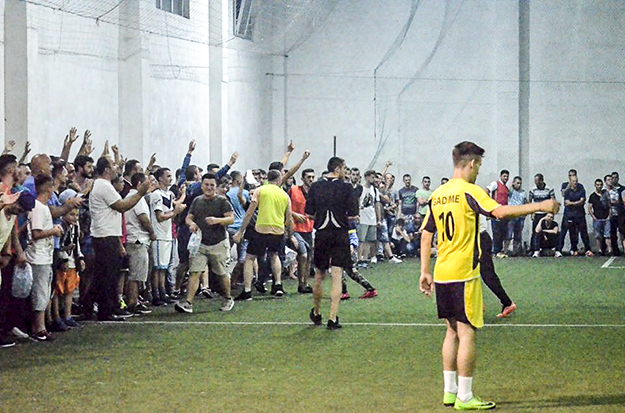 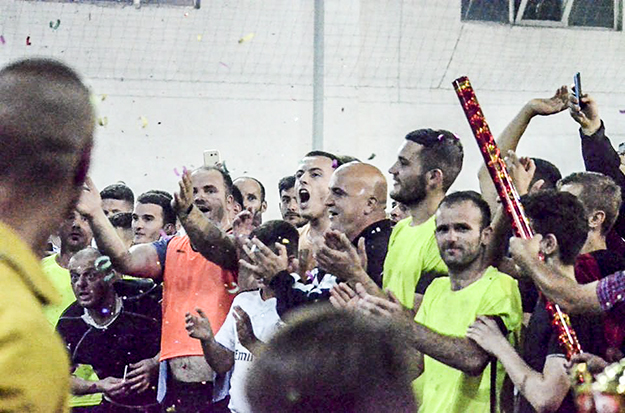 The hesitation shown by officials at the Municipality of Lipjan for supporting Liga Total has been shaken by the insistence of young people in the region to continue organizing the league. Hashani says that the municipality has decided to offer financial help for this activity, seeing that it has been running for years.

Saraci hopes that this support will expand to include the reconstruction of the stands from where the fans follow these matches. He sees this as important because there is a high number of spectators, which has often hampered the normal flow of matches.

Regarding sports infrastructure, the Law for Empowering and Including Youth places responsibility on local authorities, who should secure public spaces in which the youth can develop their “educative informal youth activities.”

The Municipality of Lipjan spent over 900,000 euros on sports infrastructure in 2016. Over 700,000 euros were spent on the City Stadium, with the rest on building sports courts in surrounding villages.

These investments do not necessarily help Liga Total, as they play on synthetic grass, whereas the facilities which were built by the municipalities are made of concrete.

After Liga Total took off in other cities across Kosovo, cooperation between organizers has grown, resulting in a competition in which the four best teams of every city play against each other in the “Champions’ League.”

Saraci says that they faced a lot of problems while organizing their version of the Champions’ League, specifically issues related to travel. He goes on to say that some aid in this regard would really help the organization of the event.

As well as engaging young people, Liga Total has also managed to produce some great talents. Saraci mentions Ylber Ramadani as an example, who first caught the eye in matches he played as part of Liga Total. This resulted in him playing for a few professional clubs in the Kosovar and Albanian Super Leagues, before earning a move to Denmark, where he hopes to develop his career. 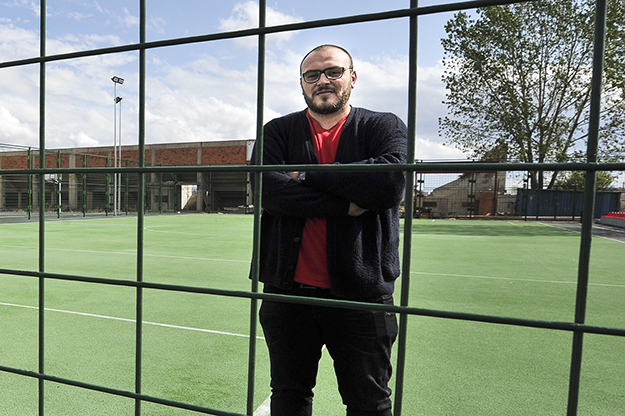 Ramadani is not the only footballer who has showcased his talent in the amateur street football league. A number of players who make up the squad at Lipjan’s KF Ulpiana first played in Saraci’s league. He says that he can count at least 50 talented players that stemmed from Liga Total.

Discovering young talent is part of the Kosovo government’s Plan for Local Action, which was adopted in March 2016. The government hopes to make these discoveries “by organizing tournaments, exhibitions and different courses.” However, currently this only happens on a spontaneous basis, not following a clear strategy.

Alban Zejnullahu, a referee with Liga Total in Lipjan, thinks that the league has developed into playing an important role in the city’s sporting life, and that institutions must support it for this reason. Zejnullahu, who is also licensed to referee Kosovo league matches but declines to do so, says that he is astonished by the organization and discipline displayed by this youth group.

“This league has provided sports culture to the youth, and this is their biggest contribution,” Zejnullahu says.K 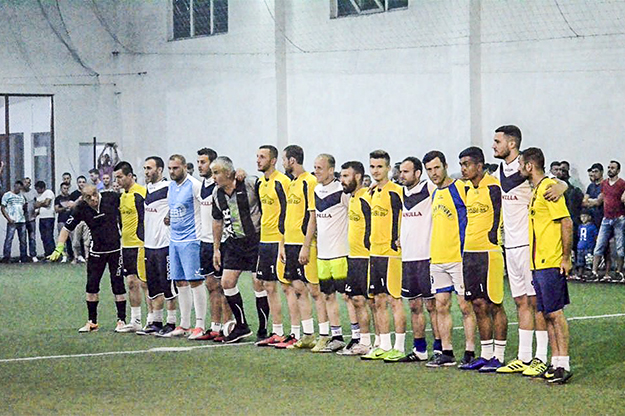 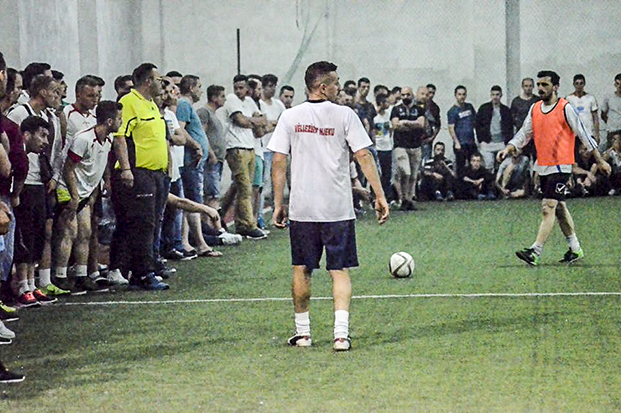 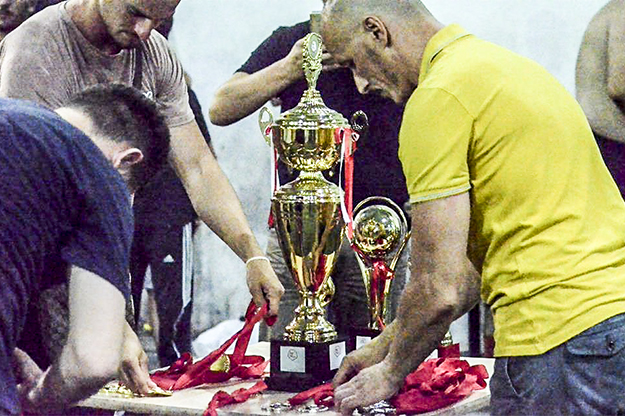