What we know and what we can do.

This article was published in February 2020 and may contain information that is now out of date. For our latest articles on the COVID-19 pandemic, please visit our COVID-19 page.

Wherever we switch on the TV or scroll through social media at the moment, everyone seems to be talking about one thing: the new coronavirus.

Each day we see news of cities being placed under quarantine, countries evacuating their citizens, fears of a global economic recession beginning and new cases being confirmed.

It being the age-of-the-internet, among all this there are also the inevitable rumors, misinformation and baseless personal theories being floated around.

So before we all turn into a traumatized, quivering mess, let’s step back and look at what we know — and what we don’t — about the virus.

We’ve spoken to health experts and gathered the most up-to-date information to counteract some of the fear and confusion with some facts.

What is the new coronavirus?

Coronaviruses are a large group of viruses that cause respiratory diseases and sometimes gastrointestinal symptoms.

Different types of coronaviruses circulate in some animals. But sometimes, due to genetic mutations or increased contact between humans and animals, they can spillover to humans.

The coronavirus that everyone is talking about now is known as COVID-19, and it is a new strain of coronavirus. It was identified in December 2019 in a group of people with pneumonia who were associated with a seafood and live animal market in Wuhan, a city of 11 million people in China.

It originated from animals and then spread to humans, who subsequently spread it to their family members and healthcare staff. In one month, the virus spread from a single city to provinces throughout China.

At the end of January, the World Health Organization (WHO) decided that the new coronavirus meets the criteria to be considered a Public Health Emergency of International Concern. This means it is “an extraordinary event” which constitutes “a public health risk to other States through the international spread of disease” and potentially requires “a coordinated international response.”

Where has it reached so far?

Since it surfaced in December last year, the respiratory virus has infected more than 80,000 people in around 50 countries.

China has the highest number of infected people, followed by South Korea. The number of new cases in China peaked in the first days of February, and the pace of new cases has slowed down since then.

However, the virus has spread to other countries, and cases have been identified in Australia, North Africa, North America, South America and Europe.

WHO now reports that the number of new cases officially reported outside of China has overtaken those reported inside China for the first time since the outbreak began.

In Europe, the largest number of cases have been reported in Italy, where over 500 people have been confirmed as infected. Of the countries with confirmed cases of infection, the closest to Kosovo are North Macedonia (with one confirmed case), Croatia (three) and Greece (three).

How does it spread?

Since this is a new strain of the virus, scientists are still working to find out more detailed information about it.

The virus is thought to spread primarily between people who are in close contact, via respiratory droplets that are produced from an infected person through coughing or sneezing. So far, it is thought that it is most contagious from people who are most symptomatic.

However, it might also spread between people before the infected person shows physical symptoms, during what is known as the incubation period. For COVID-19 this is estimated by WHO to be in the range of one to 14 days — some researchers suggest it may be longer, up to 24 days.

Currently, it’s not clear exactly how easily it spreads from person to person. Scientists estimate that an infected person may on average spread it to 1.5 to 3.5 people, if they are not isolated.

Another possible way for the virus to spread is through touching one’s own mouth, nose or eyes after touching a surface or object that has the virus on it — for example a surface that has been touched beforehand by an infected person.

How fast is it spreading?

Currently, thousands of new cases are being reported each day. It is thought that the true scale of the number of people infected could be up to 10 times larger than official figures show. That’s largely because many people may only have mild symptoms and aren’t sick enough to go to the doctor, meaning they won’t be counted in the number of official cases.

What are the symptoms?

Initially, the virus manifests as a fever, dry cough, fatigue, possibly headache and muscle ache, and after about a week it may lead to breathing difficulties such as shortness of breath. Other possible symptoms in some patients may include a runny nose, sneezing, sore throat or diarrhea.

The majority of infected people appear to have a mild flu; according to the World Health Organization around 80% of them recover from it without requiring any special treatment. In a minority of cases, the infection may advance to more severe illness such as pneumonia or organ failure. 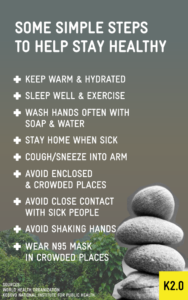 When should you see a doctor?

If you suspect that you have the symptoms, you are officially urged not to attend medical facilities in the first instance.

Instead, the Government asks all those who experience fever, cough and breathing difficulties, and those who have traveled or have been in contact with someone who has been confirmed or suspected to have been infected to call a specially designated hotline 038/200-80-800 for information and consultation.

The official advice is to stay at home and avoid contact with others.*

How is it treated?

It has been reported that, in record-time, a vaccine against COVID-19 has been created already and may be ready for testing on humans in the upcoming months. However, for now, no vaccine is available.

Are some people more at risk than others?

Similarly to the normal flu, recovery depends on the strength of one’s immune system.

Older people and those who have medical problems such as high blood pressure, heart disease or diabetes are more likely to develop severe symptoms from this virus.

Children seem to be less susceptible to the virus than adults so far.

Initial data from patients in China also suggests that men seem to be affected more severely than women, although the infection rate of men and women is roughly the same.

How worried should we be?

The core piece of advice from all officials is that there is no need to panic.

While COVID-19 has claimed around 2,800 lives worldwide, the vast majority of those affected recover — more than 33,000 people to date.

However, COVID-19 does appear to be more transmissible than these two predecessors.

What measures can we take to protect ourselves?

WHO and the National Institute of Public Health in Kosovo recommend a series of steps that each of us can take to help stay healthy.

Effectively, the advice is no different to the general “common sense” advice recommended for a generally healthy lifestyle.

Sleep well, keep your body warm and hydrated, and exercise.

Wash your hands regularly with soap and water, if you need to cough do it into the inside of your elbow and avoid touching your mouth, nose and eyes.

If you feel unwell, you should stay at home and avoid other people, while if you see someone else is unwell you should avoid contact with them — maintaining a distance of at least 1 meter from anyone who is coughing or sneezing is advised.

Other advice includes avoiding going to crowded and enclosed places.

Should I be wearing a face mask?

There is different advice about this from different sources.

If you do choose to wear a mask, you should ensure it is an N-95 mask — this is a type of face mask which has a filter that stops 95% of particles reaching your mouth and nose. It’s also important that you know how to put on and take off your mask properly and that you don’t use this as a replacement for other preventative measures.

How are the Kosovo authorities responding?

The director of the National Institute of Public Health, Naser Ramadani, explained in a recent interview on Klan Kosova that in managing epidemics and pandemics, one of the first conditions that needs to be met is to delay the viral infection from arriving.

To illustrate, he noted that the H1N1 virus (commonly known as swine flu) surfaced in Mexico in 2009 and became a pandemic with heavy consequences globally; in Kosovo cases were minimal, at least in part due to the arrival of the virus six months after its initial spread.

Ramadani said that the delay of the arrival of COVID-19 in Kosovo means that authorities are more prepared to deal with it.

“In our initial prognosis we said this virus would arrive in Kosovo in three to six months — we are almost in the third month now,” he said. “The delay makes us more prepared and knowledgeable with the experiences of global epidemiologists who have already produced much research.”

A steering committee was created on February 25 to manage a potential outbreak in Kosovo. The committee is composed of representatives from the Ministry of Health, the National Institute for Public Health, the WHO Office in Prishtina, and other relevant authorities.

What plans do authorities have in place?

According to Ramadani, these authorities have made all the necessary preparations to respond to potential cases of the virus in Kosovo, and a Contingency and Preparedness and Response Plan has been drawn up in case infected people are identified.

Additionally, the authorities are monitoring the borders. Teams have been set up throughout Kosovo in the Family Medicine Centers in readiness to immediately attend to any suspicious cases of travelers entering Kosovo across land borders and to recommend further medical procedures according to the plan.

The National Institute of Public Health says it is also particularly focusing on the airport; it is in constant contact with medical teams at the International Airport in order to monitor the situation in case there are any cases. These teams are especially monitoring flights from certain locations, including Italy, which has the highest number of cases in Europe, and Turkey, which has direct flights from China.

Medical checks are also being carried on people crossing some land borders.

What is the plan if a COVID-19 case is confirmed in Kosovo?

According to Sergy Koryak, liaison officer and head of office in the Kosovo WHO Office, 10 isolation rooms have been set up so far at the main University Clinical Center of Kosovo (QKUK). If a patient is identified they will be transported to the hospital, isolated and their spit will be tested.

The test takes five hours. If the test is positive, the patient will be transported to the infectious disease unit at QKUK and placed in isolation. A special intensive care unit is also available if required.

The Institute and WHO say that Kosovo also has an up-to-date, certified laboratory to conduct any required tests with a highly trained staff.

While these protocols may sound alarming, it is the responsibility of authorities to carry out such preparations and to be ready for the worst case scenario. And as individuals, our responsibility is to simply take sensible, everyday steps to play our part in protecting our health.K

*Editor’s note: The information on what those who have symptoms of the virus should do was updated on March 13 to reflect updated official advice.