Demands for criminal prosecutions after death of Prizren 3-year-old.

Dozens of citizens answered the call of a group of NGOs to protest in Prizren’s Shadervan Square on Wednesday, following the death of a 3-year-old girl in the city last week. Xheneta Gashi died when the roof of a cultural heritage house in the Historical Center of Prizren, fell upon her after heavy rain. 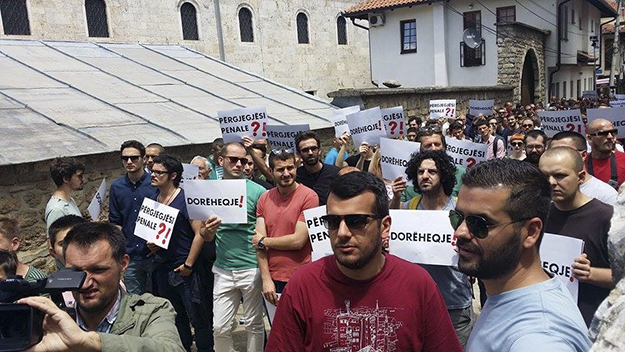 Hajrullah Ceku, from cultural heritage NGO Ec Ma Ndryshe, told protesters that the Ministry of Culture has failed to take any action in recent years to preserve or maintain these constructions, or any other in the Prizren region. He also accuses the Municipality of Prizren of failing to take action to ensure that they do not pose a risk to the citizens of Prizren, even after continuous warnings that such a threat existed.

Following the media coverage of the incident, the Municipality of Prizren issued a statement offering condolences to the family in the name of the city’s Mayor, Ramadan Muja, stating that the houses fell under the Ministry of Culture’s responsibility. But the Ministry of Culture, denies responsibility, saying it had asked the Municipality to take appropriate safety measures after the collapse of another house in the same street.

Since last week’s incident, the Municipality has taken precautions by placing large cement blocks in front of the site, but the NGOs consider it too late. They say that the only course of action left is the resignation and criminal prosecution of those who they consider responsible: Mayor of Prizren, Ramadan Muja, Minister of Culture, Youth and Sport, Kujtim Shala and Minister of Urban Planning, Ferid Agani.

With banners calling for “Resignation” and “Criminal Responsibility” the protest was characterized by speeches from the organizers, and sporadic cries from the crowd.

“We ask the competent institutional organs to prioritize this case and give the deserved punishment to all those who have neglected their lawful obligation, causing this tragedy,” Ceku said in his speech. 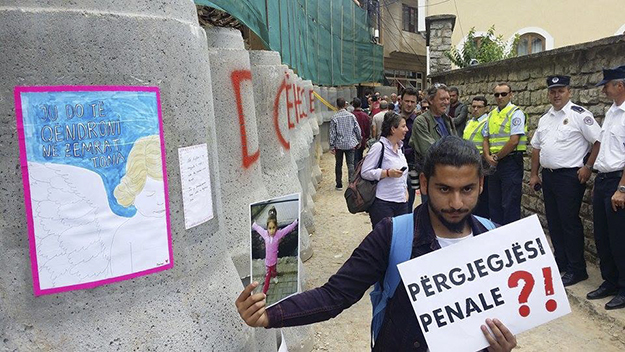 At the end of the main protest, many of the protesters continued on to the site of last week’s tragedy, where activists sprayed the word Doreheqje (Resignation) onto the recent cement constructions.

Fight for justice to continue

Organizers of Wednesday’s protest say that this was just the start of their actions and they plan to continue their activism to ensure that Xheneta receives some justice.

The state prosecution has opened investigations into possible instances of “neglect,” with Prizren’s Chief Prosecutor, Syle Hoxha, promising to find those responsible. Ceku, has warned that if the case is dragged out, they will open a citizen’s lawsuit against those who they see as being responsible.

Ec Ma Ndryshe has already announced that it has decided to cut any form of cooperation with the Municipality of Prizren, the Ministry of Culture and the Ministry of Urban Planning until the heads of these institutions resign and are prosecuted.

Ceku also told K2.0 that his NGO has started a petition with their demands and that they will also be calling for the issue to be discussed by deputies in Kosovo’s Assembly. A further protest is also being planned, this time in Prishtina, with the details still being finalized.

Among other symbolical actions, Ceku said that they are mobilizing to help Xheneta’s family to build a new house, as the building in which they were living was also badly damaged during last week’s tragedy. The girl’s mother has refused the help of the Municipality of Prizren, saying that she wants to see them in court, and will only accept help from the good will of citizens.

Since last week’s tragedy, there has been a large outpouring of solidarity with the family, both on social media and at events such as an impromptu candlelit vigil in Prizren last week. Ceku believes that as long as citizens continue to take personal responsibility to react and speak up, then some form of justice can be achieved.