Kosovo plays first competitive match in Prishtina, commemorates man who brought it there.

And so it finally happened. Ten and a half years after declaring independence, and over two since it was inducted into UEFA, Kosovo played a competitive international football match on grass grown in Kosovar soil.

After spending the whole of the qualification campaign for World Cup 2018 playing its home games in Shkoder in Albania, last night (Sept. 10) saw Kosovo’s first home match in UEFA’s newly formed Nations League tournament played at the Fadil Vokrri stadium in Prishtina against the Faroe Islands.

While the first half was a lifeless and nervy affair, where the weight of the occasion seemed to affect the fluidity of the home team’s attacking game, two goals without response early in the second half ensured that the history books will also show a 2-0 win for Kosovo on this momentous evening.

The one note of tragedy amid the triumph was that the man who gave the stadium its name was not there to see it in person. Fadil Vokrri, the Football Federation of Kosovo’s former president, who played a huge role in the associations recognition and acceptance into FIFA and UEFA, having sadly passed away in June aged just 57. 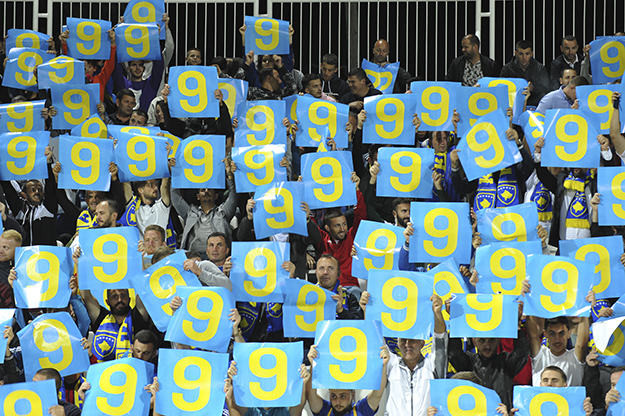 The home team took to the pitch wearing T-shirts with ‘Vokrri, 9’ printed on the back, and after opening the scoring on 50 minutes, Arber Zeneli ran to the Kosovo bench and lifted one of the shirts skyward, Vokrri’s visage held aloft amid the celebrating players. 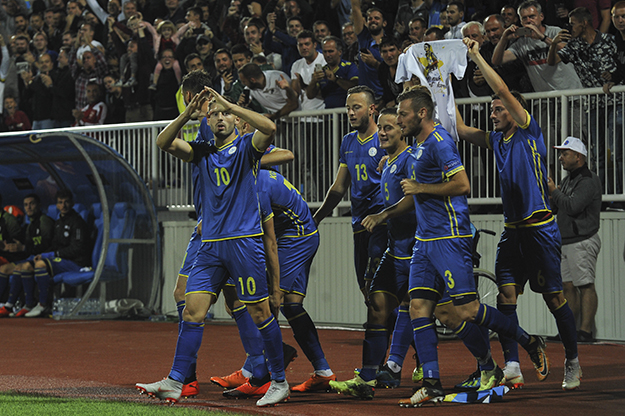 Before that, as the clock ticked over into the ninth minute in a dull first half, placards holding the same message were held high by the crowd as Dardanet, Kosovo’s ultras group, unveiled a tifo proclaiming Vokrri as “our hero.” The former Prishtina, Partizan Belgrade and Yugoslavia striker’s name was sung throughout the game, ensuring Vokrri’s presence on what would surely have been one of his proudest nights.

After the match, Kosovo coach Bernard Challandes, who has now won four of his five matches in charge of the men’s national team and has yet to concede a goal, dedicated the win to Vokrri. Faroese coach Lars Olsen meanwhile told K2.0 that the sense of occasion definitely added to the challenge for his side.

A new team in a new competition

UEFA’s new tournament has been greeted with bewilderment by many football fans due to its complex format, but the Nations League offers Kosovar football more than the chance to play its historic first home match and commemorate its former president.

Kosovo’s recent entrance into UEFA and difficult 2018 World Cup qualifying campaign has left them ranked 141st in the FIFA rankings, 50th out of 55 UEFA members. Their low ranking means that Kosovo will inevitably face another Herculean task to qualify for Euro 2020 when the draw for the qualifying competition is made in December.

However, it also ensures that Kosovo is placed in the fourth and final tier ‘League D’ of the Nations League, specifically in Group 3, alongside Azerbaijan, Malta and last night’s opponents, the Faroe Islands. Winning the group would promote Kosovo into League C, allowing them to climb the rankings and ensure a higher calibre of opponent for the next edition of the competition.

But this year’s tournament also allows the potential to qualify for the European Championships in 2020. The four teams with the best records in each of the four Nations Leagues that subsequently fail to qualify for Euro 2020 will enter a play-off tournament in March 2020 to compete for one of four final slots, effectively offering Kosovo two chances to reach the tournament.

It’s taken a long time for Kosovo to get to this stage — playing matches actually at home, and for places at major tournaments to seem like a potentially attainable goal rather than an impossible fantasy. The former will now surely help the latter, and it’s hard not to begrudge the technical delays, from absences of government to strict UEFA regulations, that mean competitive international football has taken so long to reach Kosovo. 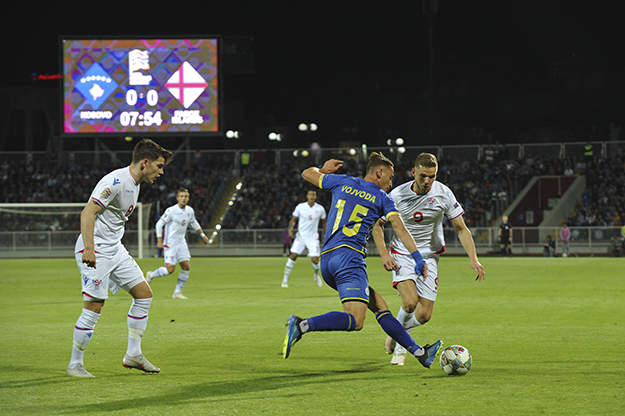 The Kosovar public’s appetite for international football seems to have only been sharpened by the delay though, with tickets for last night’s game selling out in a matter of hours. The five figure crowd’s eruption after Zeneli’s opening goal gave the players a visible lift, as they pushed home their advantage by adding a second through Atdhe Nuhiu less than five minutes later.

Each substituted player received a huge standing ovation from the supporters, and electric nights like this in Prishtina will surely help Kosovo win over future talents that are eligible for multiple national teams. Questions of identity always surround matches involving the Kosovo national team, and for what it’s worth the sold out stands seemed to be more embroidered with the yellow and blue of Kosovo’s flag than the red and black of Albania’s. 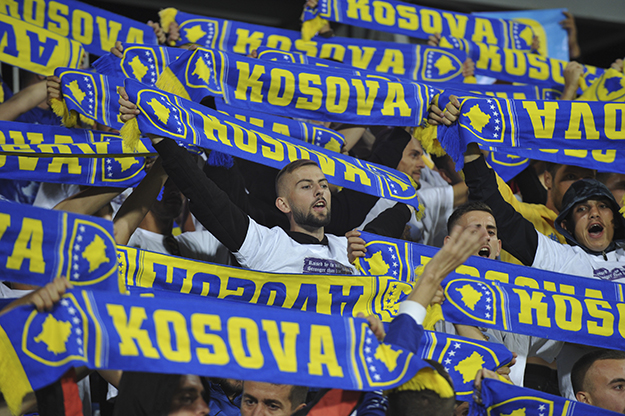 The defining color of the night though was the white of the T-shirts dedicated to Vokrri. The little striker was on the pitch for one of the most memorable games previously held in Prishtina, when the team from the capital beat Partizan Belgrade in the old Yugoslav First League in front of a reported 40,000 people in 1986.