For the author or for everyone? - Kosovo 2.0
In-depth | Copyright

For the author or for everyone?

Claims over the rights to intellectual property divide activists and the state.

The law on copyright in Kosovo prevents the use of work without the author’s consent, defining this breach as a criminal act. Aiming to fight the potential misuse of materials protected by copyright, Kosovo established a task force against piracy in January 2013; made up of the Kosovo Police, Kosovo Customs, the Market Inspectorate, and the Agency for Managing Seized and Confiscated Assets.

In public discussions on copyright, it has been continuously emphasized that the law is not being well implemented in Kosovo, and as a result problems are arising, especially in the arts world.

However, for years now we have seen a new global tendency to discuss and challenge the notion of copyright. Copyrighted materials have been widely, and illegally, distributed across the internet, with the right to access to knowledge, or the ‘democratization’ of knowledge being used as a justification.

The case of three Swedes, Peter Sunde (with whom K2.0 conducted an interview), Gotfrid Swartholm and Frederik Neij, who created the Pirate Bay, a website which allowed films to be downloaded for free, opened a pan-European debate on copyright and intellectual property. The case set a new precedent regarding artistic pieces protected by copyright, which were being threatened like never before. The way in which the Pirate Bay operated, where films were uploaded by whoever possessed them, made it difficult to put an end to the phenomenon.

After protests were held in many European cities to protect the website, the three ‘pirates’ were sentenced to a year in jail and a fine of around 2.7 million euros by a court in Sweden in 2009, on the basis of an indictment filed by powerful Hollywood film studios, who claimed that they had suffered millions of dollars worth of damage.

However, the sentence did not halt the Pirate Bay’s operations, as it continued to distribute films throughout the world. The group behind this, known as “The Pirate Bay Away From Keyboard,” justified their actions by pointing out the democratic right to have access to artistic and scientific pieces. The internet was seen as a field that had enabled a triumph for this right, which had been absent for many years, and should be utilized to its full potential.

The ‘democratization’ of knowledge in Kosovo

The webpage Shfletuesi.com, established in May 2015, was an initiative within which hundreds of Albanian books could be accessed, books that had been scanned and that readers could download for free. Shfletuesi had books from a huge range of fields, including literature, philosophy, sociology, psychology, history, economics, and journalism. The website also had a Facebook group with around five thousand members, which enabled easy distribution of information on the books that were on offer. Everyone had the chance to offer books in an electronic format, enabling the creation of a wider network for distributing and accessing books.

Shfletuesi.com was created as a result of the economic situation in the country, and the inability (especially for students and young people) to buy books as a result.

However, in January 2016, Shleftuesi.com was shut down with no clear reason as to why.

K2.0 contacted the administrators of the website through Facebook, asking them about the functioning of their page, as well as its shutdown. Through a written response, Shfletuesi explained that their initiative was rooted in Kosovo’s economic situation, and the lack of opportunities for many people (especially students and young people) to buy books due to their economic circumstances. They added that they were inspired by international pages with a similar format.

Behind the page was a team of four students: three administrators and a web designer. Most of the books that were released on their page were their own, books that they had transformed into a PDF file and subsequently distributed. Aware that their activities were against the law, and having received indictment threats from publishing houses and other legal organizations, they knew that law enforcement would soon be in contact.

Besides this, the financial aspect of maintaining the page was becoming too much for the students to handle, as was the time needed to keep the site up and running. Faced with legal threats, high costs and limited time, they decided to close the website. But, in a statement for K2.0, the team said that this would only be temporary, and that they would resume their activities soon.

It’s not just books that have been pirated in the Albanian speaking world, cinema has also been affected by unauthorized distribution of materials. For years now, many pages exist that offer films with Albanian subtitles. In fact, world premieres of films are usually made ready for download in a relatively short period time. They are even in HD!

The number of films available on these pages reaches into the thousands; Filma24.tv alone has over 2,500 films with Albanian subtitles. A Facebook group for the website (before it was closed by Facebook itself) had over 150,000 members, while a newly opened group has since reached 22,000 members.

The administrators of the page told K2.0 that their activities do not produce income: “With [such] pages, and with Albanian consumers, you cannot make money,” they reveal.

Instead, the motivation behind the site is their passion for film. The page survives through contributions from people that voluntarily provide translated subtitles. The website is merely a means of distribution. The films themselves are obtained through international sites hosting the videos, all that is left is to provide subtitles, and collect the movies on the website.

The war against piracy and the democratization of knowledge

In Kosovo, opinions differ regarding copyright and the ‘democratization’ of knowledge. While representatives of institutions have legally taken it upon themselves to protect the rights of the copyright holder, civil society activists are fighting for the democratization of knowledge. They oppose the law on copyright specifically because of the socio-economic situation, which according to them, is excluding a lot of people from access to knowledge.

"Whoever holds author rights, in one way or another, denies free access to a book, setting a price that they see fit without taking into consideration whether that price is affordable in the local market"

Fitim Salihu, an activist at the the Students’ Policy Club that operates within the University of Prishtina, thinks that copyright clashes with the ‘democratization’ of knowledge, as it limits access to knowledge to a large number of people. He brings up the example of books, saying that whoever holds copyright, in one way or another, denies free access to a book, setting a price that they see fit without taking into consideration whether that price is affordable in the local market. 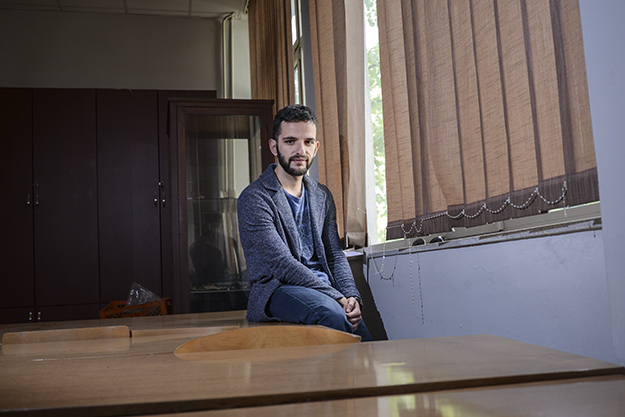 Activist at the Students’ Policy Club, Fitim Salihu, says that the democratization of knowledge in Kosovo is necessary due to the socio-economic circumstances in the country. Photo: Atdhe Mulla / K2.0.

However, Valon Kashtanjeva, the head of the office for Author’s Rights and Related Rights at the Ministry of Culture, Youth and Sport (MCYS) in Kosovo, stands behind the institutional claim that piracy hampers cultural development in countries. He adds that the law that regulates this issue is based on international laws, the makers of which have deliberated carefully over the potential problems that can arise after implementation.

Kashtanjeva tells K2.0 that the determination of local institutions in the fight against piracy has by now been proven, not least with the creation of the Task Force against Piracy, which has produced considerable results.

Up until 2016, the Task Force confiscated more than 40,000 pirated materials, mainly CDs with musical or film content, but also copies of books. However, in the past two years, the rate of confiscated materials has been in drastic decline (in 2016 around 3,000 materials were confiscated), indicating that, according to Kashtanjeva at least, the situation on the ground is improving. 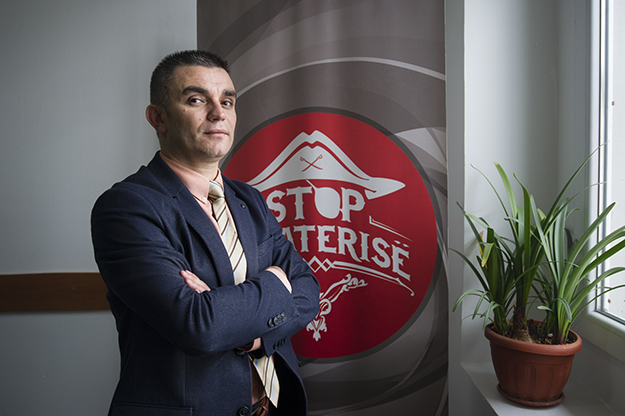 Valon Kashtanjeva, head of the office for copyright at the MCYS, believes that creators must be compensated for their work, or else they will stop creating. Photo: Atdhe Mulla / K2.0.

For Kashtanjeva, the crux of the piracy issue is the regulation of Kosovo’s market, but he also believes that intellectual, artistic and creative fields flourish from this as well: “Copyright aims to stimulate literary and artistic creativity, and to offer compensation to authors.”

Kashtanjeva also explains that Kosovo’s law on copyright was a legal condition that needs to be met, according to an EU directive. According to Salihu, this alignment with EU legislation creates a frequently repeated mistake, as laws are being taken as a template from EU countries without being contextualized to the socio-economic conditions in Kosovo, and that this is especially true for copyright.

Salihu believes that the discussion about the democratization of knowledge must take another direction, as discussing it on a legal basis limits the debate. “We must discuss this by asking whether it is right, in principle, for a physical or legal person to hold knowledge hostage, away from the masses,” he states.

Salihu believes that the application of such a law leads to great danger; the potential that in the 21st century, a large part of the population will be excluded from knowledge. According to him, a monopoly of knowledge is created through copyright; where certain wealthy persons reserve knowledge to create more wealth.

Kashtanjeva agrees that access to knowledge is important, but, according to him, we must understand that it is limited by copyright, and that this is only because the authors, or the people that create the work, must be compensated. “If these creators are not financially compensated, no one can ensure that they will continue to work in their creative fields in the future,” he states.

Salihu disagrees, stating that to achieve a strong creative sector, the state must create better conditions for students and young people, including having more opportunities to access knowledge. He believes that this can be done by investing in libraries and subsidizing publishing houses.

The ministry is aware of these needs, but Kashtanjeva feels that not everything depends on the government. “We cannot expect authors to give out books for free,” he says. “This would be like asking a person who has an available apartment to let it for free since there are many people out there who do not have houses. The right to residence is important, as is the right to access knowledge, but we must bear in mind that the right to property is a constitutional right.”

He relates all this to the evolution of life circumstances, saying that life dynamics and occupations require greater and continuous access to new knowledge. He also sees contradictions within copyright law, highlighting a research study conducted by economist Mariana Mazzucato, who points out that 85 of the greatest inventions of the 20th century were done within public institutions, and were then patented by corporations or individual who have benefited from them financially.K