From “Honeyland” to the Oscars - Kosovo 2.0
Lately | Film

When Joaquin Phoenix meets a beekeeper from North Macedonia.

While the whole world talked about Joaquin Phoenix’s acceptance speech after he was honored with the best actor award at the 92nd Oscar Awards in Los Angeles last week, he was busy looking for Hatidže Muratova, a beekeeper from Bekirlija village in North Macedonia.

Muratova is the main character in the “Honeyland” movie, directed by Tamara Kotevska and Ljubomir Stefanov. The film was nominated in two categories: Best Documentary Feature and  Best International Feature Film. 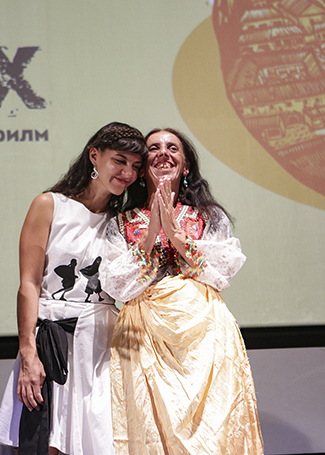 Hatidže Muratova was at the center of the film. Co-director Tamara Kotevska says that the attention given to Hatidže and the film shows that the “world is tired of false super heroes.” Photo courtesy of Tamara Kotevska.

Immediately after the awards, the movie’s team spoke to journalists in Skopje through a video link, conveying their first impressions. According to them, although the movie didn’t win any awards, it attracted a lot of attention.

“We stood side by side with great stars who I could not have dreamed of ever meeting,” said Samir Ljuma, the director of photography. “Their reaction was fantastic, as well as the fact that Hatidže was standing on the red carpet. Many stars wanted to take photos with her. Even Joaquin Phoenix came to meet her, as did the director of the film “Joker,” Todd Phillips.”

Director Tamara Kotevska says that the Oscar nominations, as well as the large amounts of attention directed at Hatidže and the movie are proof that the “world is tired of false super heroes. This is why everybody bowed to Hatidže. Not only to her but to all the ingenious characters that have been presented by courageous documentary filmmakers in incredible documentaries throughout the year.”

"Honeyland" is the third movie in the history of Macedonian films that's been nominated for the Oscar.

Five years in the making

The film has received a total of 48 nominations for prestigious movie awards across the globe, and won 32, including at the Sundance Film Festival where it won Best Documentary Feature, Best Photography and the Special Jury Prize.

“Honeyland” is the third movie in the history of Macedonian film to have been nominated for an Oscar. The first is the short movie by Stole Popov, “Dae” (1979), and then Milčo Mančevski’s “Before the Rain,” which was nominated for Best Foreign Language Film of 1994.

It is a story about a woman with a sick mother in the village of Bekirlija, isolated from the rest of civilization.They live in harmony with nature, while bees are their best friends.The film shows Hatidže and her relationship with nature and the bees who she shares honey with — half for her, and the other half for the bees. This harmony is disrupted by people who see nature as a way to increase their profits, thereby violating the natural balance. 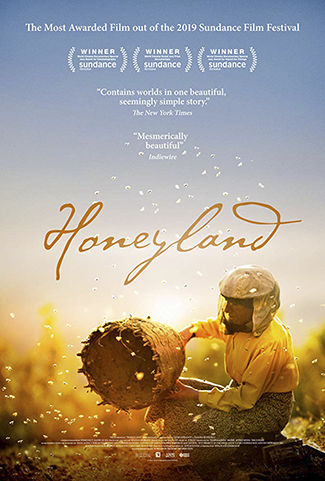 The movie was shot in 2015, as part of a project on nature preservation in North Macedonia. Originally, the idea was to record an environmental documentary about a river in this part of the country. However, plans changed when the filmmakers found carefully preserved hives with wild bees and the woman taking care of them, Hatidže.

“Hatidže and the Huseini family opened up to us,” director Ljubo Stefanov recalls. “They allowed us to enter their world, to see birth, death, fights, arguing. All sorts of stuff. Both the stuff you want to see in the movie and the stuff you don’t. We understand that the public is happy about the success, but bear in mind that these are real characters with real lives.”

Cameraman Fejmi Daut said that while working on the movie, the close relationships with Hatidže and the other characters were all a great challenge but that it was also “love at first sight.”

“In documentary filmmaking it is important to be in the right place at the right time, while it’s a bonus if you have an incredible person in front of you,” Daut recalls. “While I was learning about Hatidže’s life, mine was also changing. I mostly learned about how we should treat things around us in daily life.”

Daut and other team members think that the Oscar nomination came as a result of what they learned while they were recording: Persistence, patience, sacrifice and dedication to work.

For Hatidže, whose life has been invaded by cameras, life has changed quite a bit, with filming and traveling to promote the film. However, even after many months on the road, Hatidže still misses her bees.

“I want to have my own peace now and not be beset by people with interviews,” she said through a video link from Los Angeles.

Apart from "Honeyland," this year saw a variety of documentary movies with strong messages.

According to editor and producer Atanas Georgiev, it is a movie that sets off from one individual and then carries a universal story that the whole world easily recognizes.

“We believe that this message, which touched the world in packed movie theaters across the planet, will reach everybody and that it will try to change something — first in ourselves, and then in the environment,” Georgiev said.

Apart from “Honeyland,” this year saw a variety of documentary movies with strong messages.

“The Cave,” directed by Feras Fayyad, is about the first and only woman in Syria who managed a hospital in rebel-controlled territory; the winner was “American Factory” directed by Julia Reichert and Steven Bognar, a movie about the opening of a Chinese glass company in Ohio and the cultural clashes between Chinese and American workers; “For Sama” was directed by Vaad al-Kateab and shows life in a hospital in Aleppo, a city under siege; and finally “The Edge of Democracy,” directed by Peter Costa, which talks about life during one of the most controversial periods in Brazil, when a right-wing party comes to power.

Four of the five nominated movies have either been directed or co-directed by women, while women are central in three films.

Tamara Kotevska says that all the women she met at the Oscars were “true role models.”

“There was a mother with two children who recorded footage during the Syrian war; also Yulia who was sick from cancer and who also shot a movie; a woman fighting the Brazilian regime. These are incredible characters. These are courageous people who have made bold steps forward,” Kotevska said. 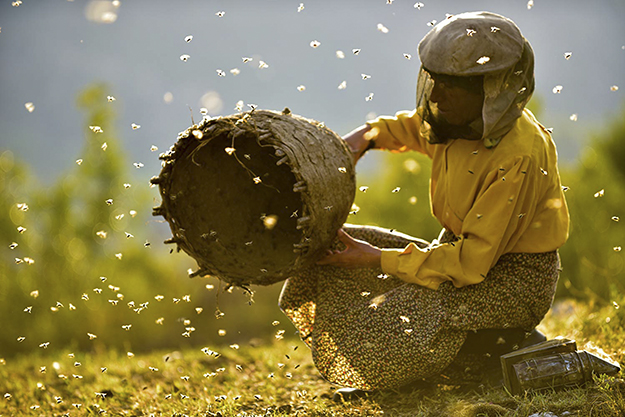 The makers of “Honeyland” look forward to going back to working on other projects. Photo courtesy of Tamara Kotevska.

In the end, although the movie didn’t receive an Oscar, the whole team emphasized that they aren’t disappointed. They think that two nominations are better than one Oscar.  They are aware of their success and the fact that they were granted the opportunity to spread the message showcased in the movie.

“Actually, publicity for us, documentary filmmakers, is inflicting more damage than doing good. It’s making our job more difficult,” Atanas Georgiev said. “We are thankful for the support offered by the public. We are happy that everyone is happy with our work but we would like to focus on future projects for the next few months.”

Hatidže is also coming back home, to her bees.

“I want to get back to my bees as soon as possible. They are asleep now but they still can’t be without me. I want to see them,” she said in her message from America.K