Hopes, fears and animating a community

At the beautiful Lake Cinema, the smaller “Cubes” Cinema in the park, the “Urban” Cinema set in a basketball court and the iconic Jusuf Gërvalla Cinema, spectators gather to watch various categories of competitions, while a jury of invited professionals in the animation world cast their votes at the end of each session. Meanwhile, every day, Anibar also organizes both a “Kids” and a “Teen” program.

Beyond the film screenings, workshops, masterclasses and panel discussions are also held, in which attendees can try to paint in space with the help of VR, learn about the use of persuasion in animation or discuss how to reclaim public space.

Anibar is a success story, and an example of the results of personal initiative coupled with the solidarity of a growing community of volunteers.

Vullnet Sanaja, the festival’s director, recalls how he co-founded Anibar at the age of 18 — the age at which they could legally start an NGO — as a way of creating a network and fostering the conditions necessary for artistic production.

Today, Anibar has established an animation academy in Peja with a yearly program and a weekly course in Prishtina, with equipment accessible for those who want to learn.

The early Anibar team simply began by contacting people from around the globe through email, promoting themselves and asking for films to showcase during the festival. Sanaja recalls contacting the director of the Melbourne International Animation Festival and “hoping that he doesn’t realize that [they’re] just some 18-year-olds who are trying to make an animation film festival.”

Much has changed over the course of 10 years. 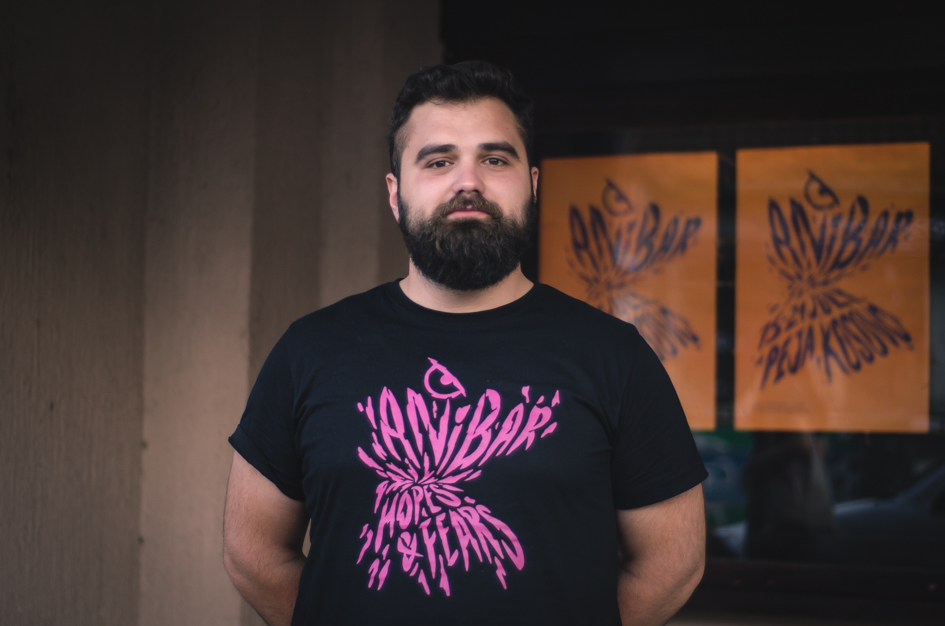 But today, Anibar has established an animation academy in Peja with a yearly program and a weekly course in Prishtina, with equipment accessible for those who want to learn.

Sanaja believes the festival has fostered a certain cultural shift in the community, and adds that he is proud of having challenged people’s norms and helped to break a sense of apathy. He compares today’s excited and positive reception of more challenging films to the early years of Anibar, when he would be questioned about why he was showing creations touching on topics such as politics, human rights or sexuality, because “the public isn’t ready.”

This activation of the community runs central to the festival. Having recently been locked in battle with the state privatization agency, attempting to save the cinema that they’ve rejuvenated from being sold, Anibar understands the importance of valuing the support of its activists and volunteers.

This dimension of activism, permeating the festival, also lies behind the theme of this anniversary edition.

The case is currently frozen, while unsolved, and the long term future of the cinema remains uncertain. However, Anibar has a 15-year lease on it with the Municipality of Peja, and they are intent on making the most out of it.

This dimension of activism, permeating the festival, also lies behind the theme of this anniversary edition after the team sought a theme that would enable them to celebrate 10 years of collective action.

“Hopes & Fears” is the tagline of this theme because, Sanaja says, they are “strong elements that, when those are explored, and when people put them in public, they become vulnerable and they might change.”

Animate to change the world

Nancy Denney-Phelps has been with the festival since she was invited onto the jury in its third year, and has been actively working with Anibar ever since. She proudly bears the title of the “grandmother of the festival,” which is printed on her festival pass.

Denney-Phelps has worked as an animation journalist for 35 years and travels around the world more often than not, covering various animation festivals around the globe. 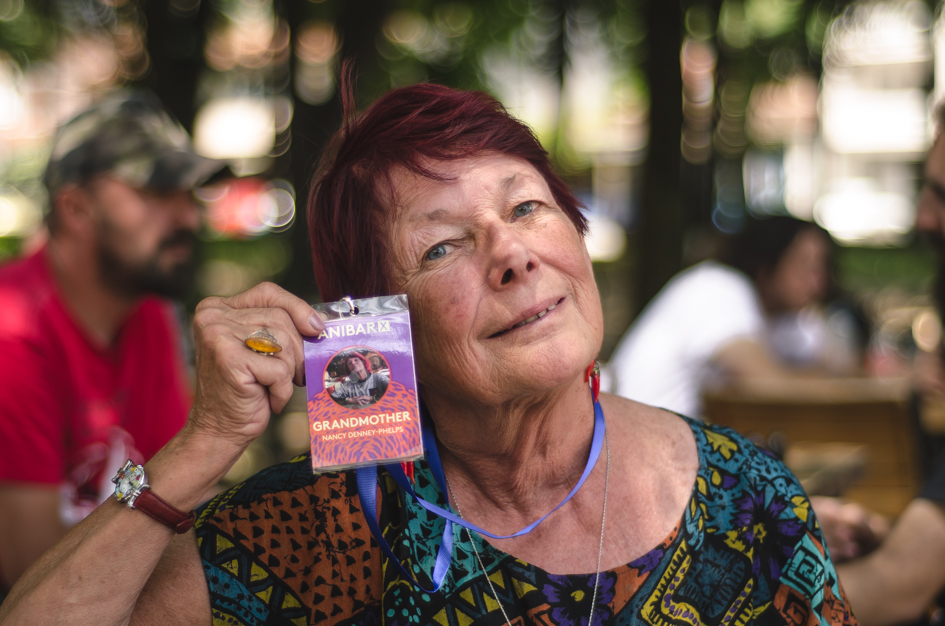 ‘Grandmother of the festival’ Nancy Denney-Phelps has been working with Anibar for seven years. Photo: Sindre Langmoen / K2.0.

“I came, and I saw what Vullnet and Rron [Bajri] and Fiona [Petrit], who were the original founders of the festival, were trying to do here, and I was so impressed,” she says. “They were trying not to put on a huge festival for the world, but to do something for their community, which is so important.”

She emphasizes the respect she holds toward Sanaja, for staying in Kosovo, in Peja, and creating something that has made an important difference in the community, when he could have moved abroad and worked elsewhere — and she believes that Anibar has had a fundamental and positive impact on the Peja community.

“I know the festival is not going to keep every young person in the town,” she says. “But it is keeping some, because when I first came here, every young person that I met said, ‘I wanna get out of here as quickly as I can.’ And now I’m meeting some who are saying, ‘I wanna stay and contribute to my community.’ And I think it is really important, how a group of people can really change a community.”

She notes that it was “really sweet that they had the opening night on the tennis court,” which brings her back to the humble beginnings of Anibar when she first attended, a time in which the screenings were shown on a simple sheet hung up in the court.

Notably in the student competitions, creativity and experimentation shines.

The festival’s grandmother explains that animation enables creators to tell stories that would be impossible to recreate in live action. “The flights of fancy, the places you can go to, that you would never be able to go to in live action,” she says.

That much is clear, when watching the various, wildly creative animation films, both by students and professionals.

Notably in the student competitions, creativity and experimentation shines.

Among the films screened have been the Egyptian short “Flipped,” which explores the nature of parent-child relationships through reversing the social order. Adults become childish and playful, while their matured children are trying to take care of their adult-sized “children.” Drawn in a child-like fashion and beautifully animated, “Flipped” takes the viewer through this little alternative universe, exploring the different comical situations that arise.

The French short “I’m going out for cigarettes” shows us the home life of a young boy who lives with his mother and sister, and a bunch of strange men with the same face, who hide in the closets and hidden corners of their home. These men turn out to be a representation of the absence of his father, the void of his absence ironically filling the space of the family life.

One of the feature films presented at this year’s festival is the Hungarian film “Ruben Brandt, Collector.” This first feature by Milorad Krstić tells the story of how a famous psychotherapist, who works with a clientele of sophisticated thieves, finds himself tormented by a series of famous paintings coming to life in his dreams.

His only way of dealing with the problem is to possess it, he concludes — thereby engaging his patients to steal a collection of the most prized paintings in the world. It’s an unlikely intersection between a surrealist film noir, a crime thriller and an experimentation into art, full of artistic references, playful details and easter eggs.

The morning after the screening, Krstić was present at the morning coffee session, where anyone could come along and ask questions about the film. He explained his concept — how art is supposed to be fun in his mind, how it should be used and celebrated playfully, as he did throughout his movie. Originally a painter himself, it was with the mindset of an individual artist that he began this work. 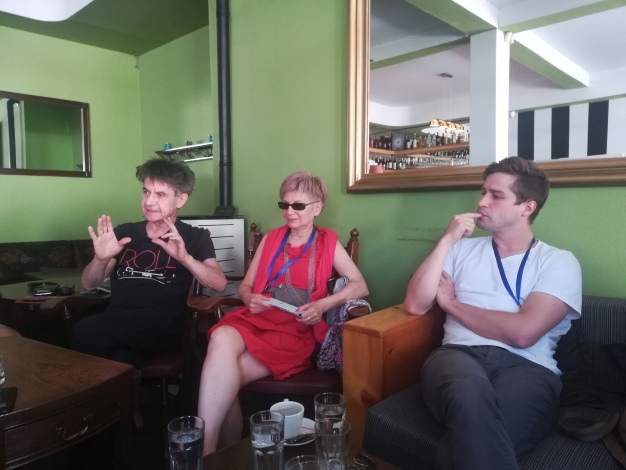 Each morning during the week-long festival, filmmakers discuss their creations with the public over coffee. Photo: Sindre Langmoen / K2.0.

These coffee sessions also enable people to gain insight into the process of creation, with its many difficulties. The process took three years, Krstić told the small crowd in the café, and one and a half years just to obtain the rights to adapt the paintings in the film.

None of the films shown seem overly concerned with an accurate depiction of the real world — humans are disproportionate, characters grow horns or wings for no apparent reason, or shift from one form to another through the magic of clay-motion. The worlds are surrealistic and traditional rules of world-building, narration and physics don’t seem relevant.

Instead, animation enables the creators to mold characters and worlds to convey certain feelings, tell certain stories of hopes and fears, with a freedom that is unique to the medium.